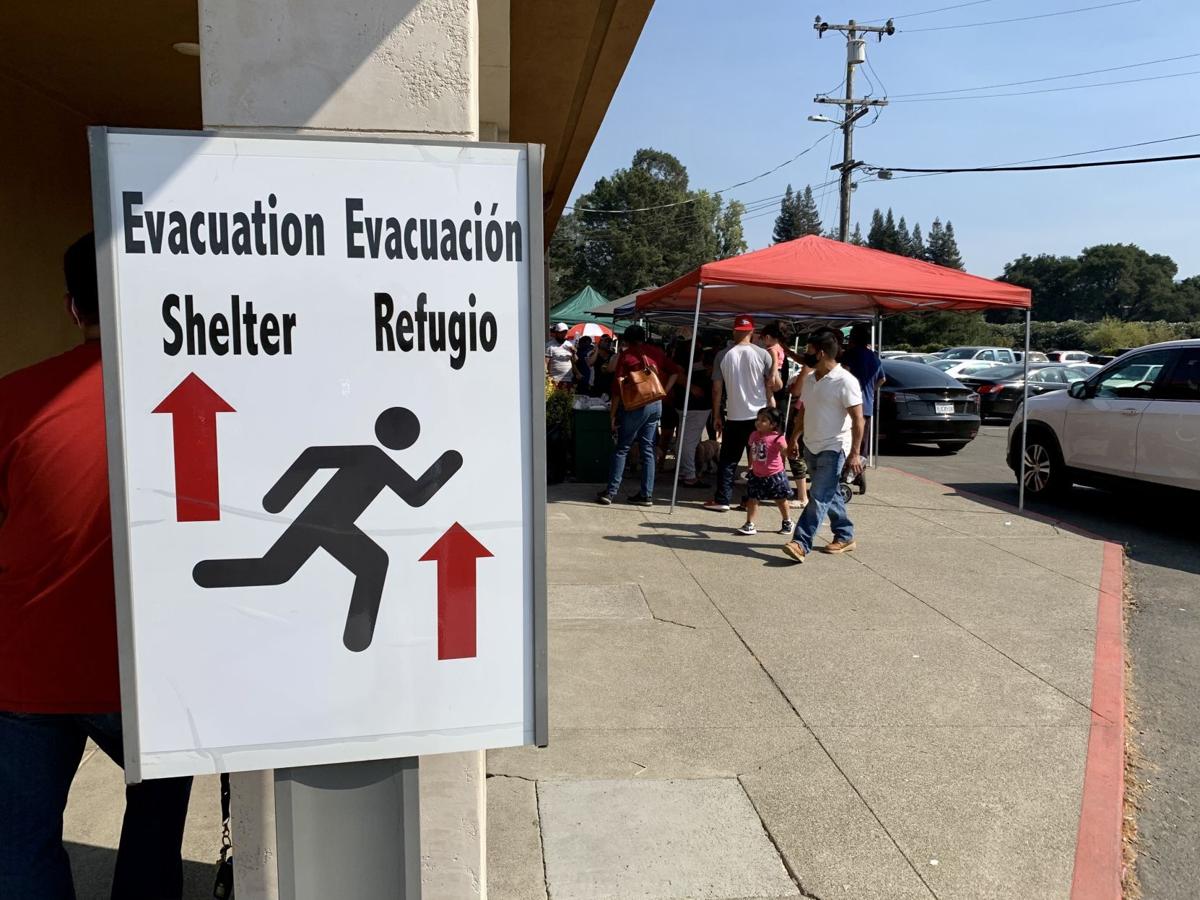 The Glass Incident wildfire raging in the Upvalley has pressed Napa's CrossWalk Community Church into service as an assistance center for hundreds forced to evacuate Deer Park, Angwin, Calistoga and other communities. 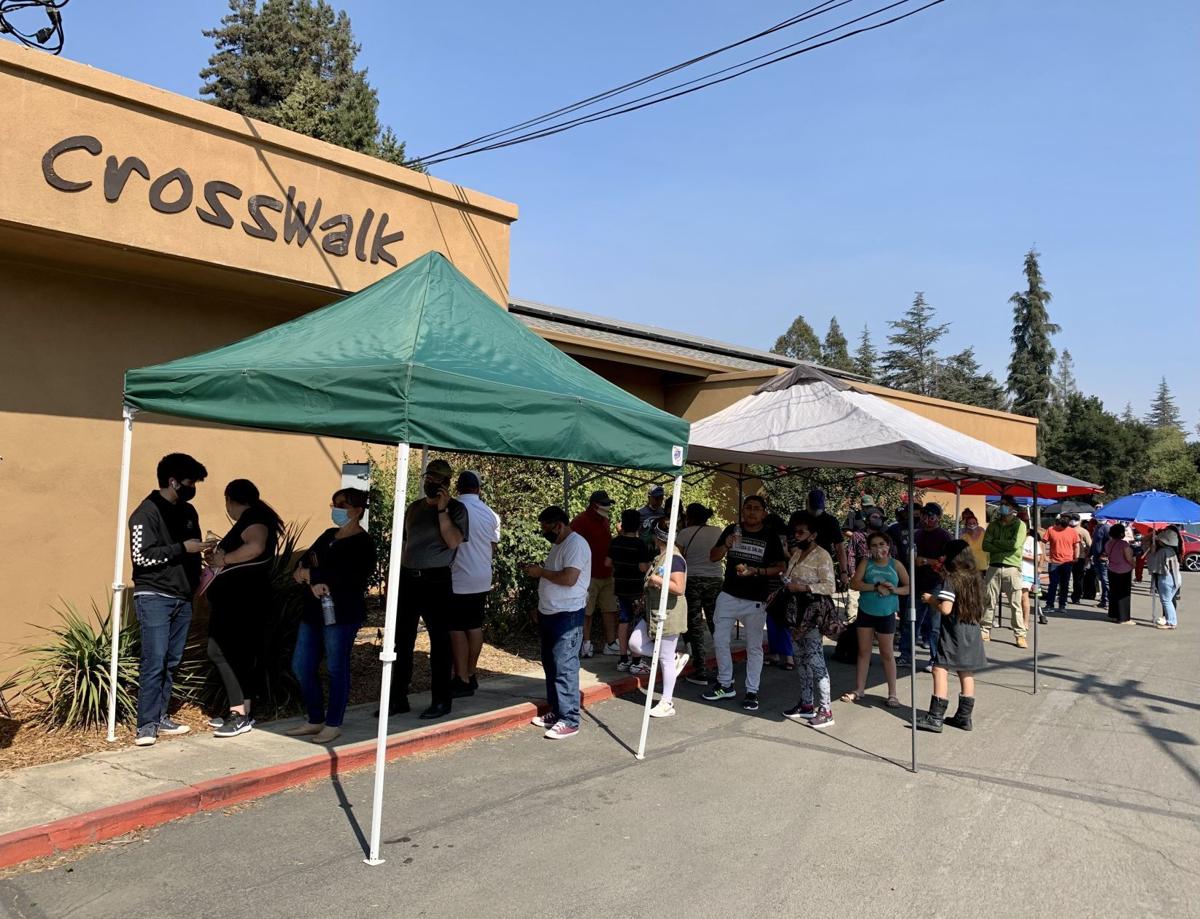 The line for Glass Incident wildfire evacuees to register for shelter at local hotels stretched to more than 120 people by midday Monday. Volunteers at CrossWalk Community Church in Napa set up shade canopies to protect waiting evacuees against 100-degree afternoon heat.

With a text message, a phone call or a knock on the door, thousands of Napa County residents have had to briskly leave their homes and seek safe shelter as the latest in a season of California wildfires tears through the wooded Upvalley.

And by Monday morning, the scope of the evacuation forced by the Glass Incident became as visible as the ever-growing queue waiting outside a Napa church to learn where they might spend the night — or the next several nights — while waiting to learn whether their homes would remain safe.

At least 426 people had registered with Napa County seeking a hotel room to shelter during the fires as of Monday afternoon, and county officials expected that number to jump sharply. More than 6,000 people are under mandatory evacuation orders and 5,000 county residents have received evacuation warnings.

By 11:30 a.m., more than 120 people were lined up outside CrossWalk Community Church, Napa County’s designated check-in center for those seeking temporary shelter in local hotels. As the temperature hurtled toward and eventually past 100 degrees, volunteers set up a chain of small canopies to shade the families, couples, seniors and dogs assembled from the church’s front door to down near a gymnasium at the end of the property.

“Just heard my neighbors moving about, and then a siren, and then a neighbor opened the door and told me we had to leave,” said J’nai Gaither, who evacuated shortly after 5:45 a.m. but reached CrossWalk only after road closures forced a circuitous drive through Healdsburg and Santa Rosa.

“I saw the glow from the balcony, in the hills across the street — it looked like you could reach out and touch the glow. The sky looked like it was awash in orange; it seemed like the only light in the town.”

There was little time for her to pack more than a laptop computer, cellphone, water, a change of clothes and pet food for her dog, one of several on leashes in the line outside the church. “This is my first time evacuating — I wasn’t really thinking, I was freaking out,” she said.

Farther up the queue was Mark Lussier, who had not immediately been ordered by the county to leave his Deer Park home, but quickly did so after a glance out the window at 4 a.m. Sunday.

“I went to close the windows because it was so windy, looked out the window and I saw the plume, red and orange colors, so I decided to pack up and leave,” he said at the CrossWalk church, seeking shelter after paying his own way at a hotel the night before. “Within a half-hour I was out the door — took my wife, our dog, both our cars, medications. I just left the garage light on and a back-door floodlight for the firefighters.”

The only news Lussier had heard from his community since then had been about firefighters’ battle to spare the Adventist St. Helena hospital and other public places — nothing yet about his home’s fate, or what caused the county’s latest conflagration.

“It’s nerve-wracking; it’s scary,” said Lussier, who also left Deer Park in August as the Hennessey Fire eventually spread to nearly a third of Napa County’s land area. “No lightning, no thunder this time — I have no idea how this fire started. These days when I see people throw out cigarette butts in the street I say ‘Oh, come on now.’”

Roland Haylock of Angwin also had left home Sunday morning, taking with him clothing, medication and pet supplies — preparations he already had made a month earlier for the Hennessey Fire.

“It is what it is — I don’t stress those things the way other people do,” Haylock, who works in Pacific Union College’s information technology department, said stoically. “We just deal with it.

The crowd outside the Napa service center had grown sharply over 24 hours, in the wake of new evacuation orders Napa County had issued overnight.

As of Monday afternoon, 6,607 people living in 2,643 homes were under Napa County evacuation orders, according to county spokesperson Janet Upton. Another 5,007 in 2,003 residences were covered by evacuation warnings, which do not require immediate departure but call on residents to be ready to leave on a moment’s notice.

Cal Fire said 8,543 structures were threatened in Napa and Sonoma counties, but no attempt has yet been made to count destroyed structures.

Unlike during past natural disasters, no evacuees are being sheltered on CrossWalk’s premises due to physical distancing requirements during the coronavirus pandemic. However, the Napa center is hosting a variety of assistance efforts, from meals prepared by the Napa Salvation Army to mental health counseling by the county’s Health and Human Services agency.

Napa County also opened a second assistance center in the Yountville Community Center, where seven evacuees had been taken Monday by Vine bus, according to Upton. More people can be steered toward the Yountville center if the wildfire’s spread forces further evacuation orders, she said Monday afternoon.

The Napa resource center is accepting donations for wildfire evacuees only in the form of gift cards, which are being distributed through the center and also can be left in a donation box at the CrossWalk church lobby at 2590 First St., according to executive pastor Dar Valencia.

“I think people understand that because of COVID it's very difficult for us to accept things in kind,” COAD director Celeste Giunta said Monday afternoon. “It's just a challenge to make sure it gets properly quarantined and disinfected.”

Gift cards may be donated directly at CrossWalk Community Church, 2590 First St., in Napa, which is serving as the main assistance center for evacuees. Cards may be delivered 24 hours a day for the time being, according to Giunta. For more card donation locations, visit Napa Valley COAD's Facebook page.

Donations also may be made online at napavalleycoad.org/donations to help organizers fund essential supplies and gift cards. For larger cash donations, visit the Napa Valley Community Foundation at napavalleycf.org and go to the Napa Valley Community Disaster Relief Fund page, where donations can be made for both wildfire and COVID-19 relief and recovery.

Harvest is reaching its climax and could be mostly over in two or three weeks.

With another fire weather watch set to kick in Thursday afternoon, Wednesday could prove crucial in the fight against the Glass Fire that continued to rage through California's Wine Country.

Long-range rainfall predictions for this winter aren't the best, but forecasters say nothing is known for sure.

Many medical services are being offered at clinics while the hospital repairs fire damage to grounds.

The Glass Incident wildfire raging in the Upvalley has pressed Napa's CrossWalk Community Church into service as an assistance center for hundreds forced to evacuate Deer Park, Angwin, Calistoga and other communities.

The line for Glass Incident wildfire evacuees to register for shelter at local hotels stretched to more than 120 people by midday Monday. Volunteers at CrossWalk Community Church in Napa set up shade canopies to protect waiting evacuees against 100-degree afternoon heat.