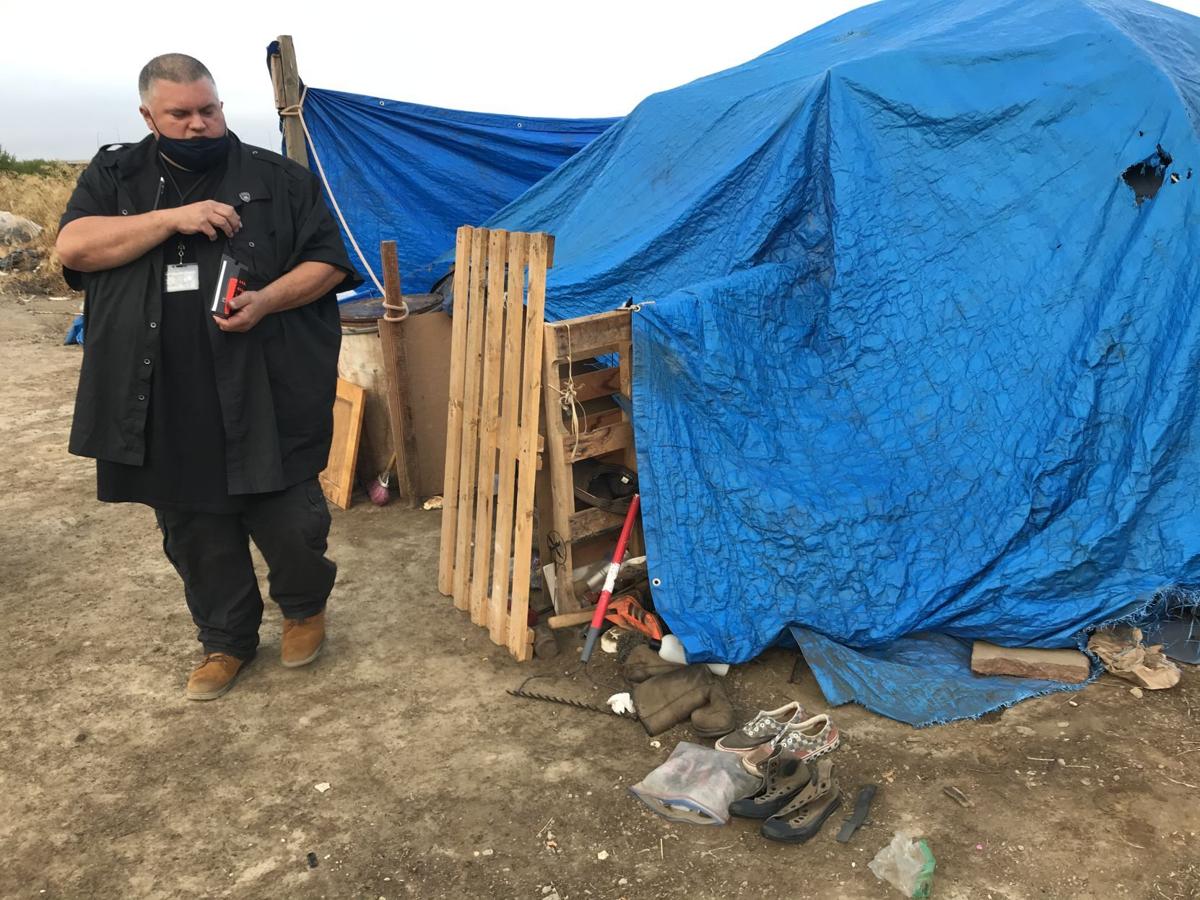 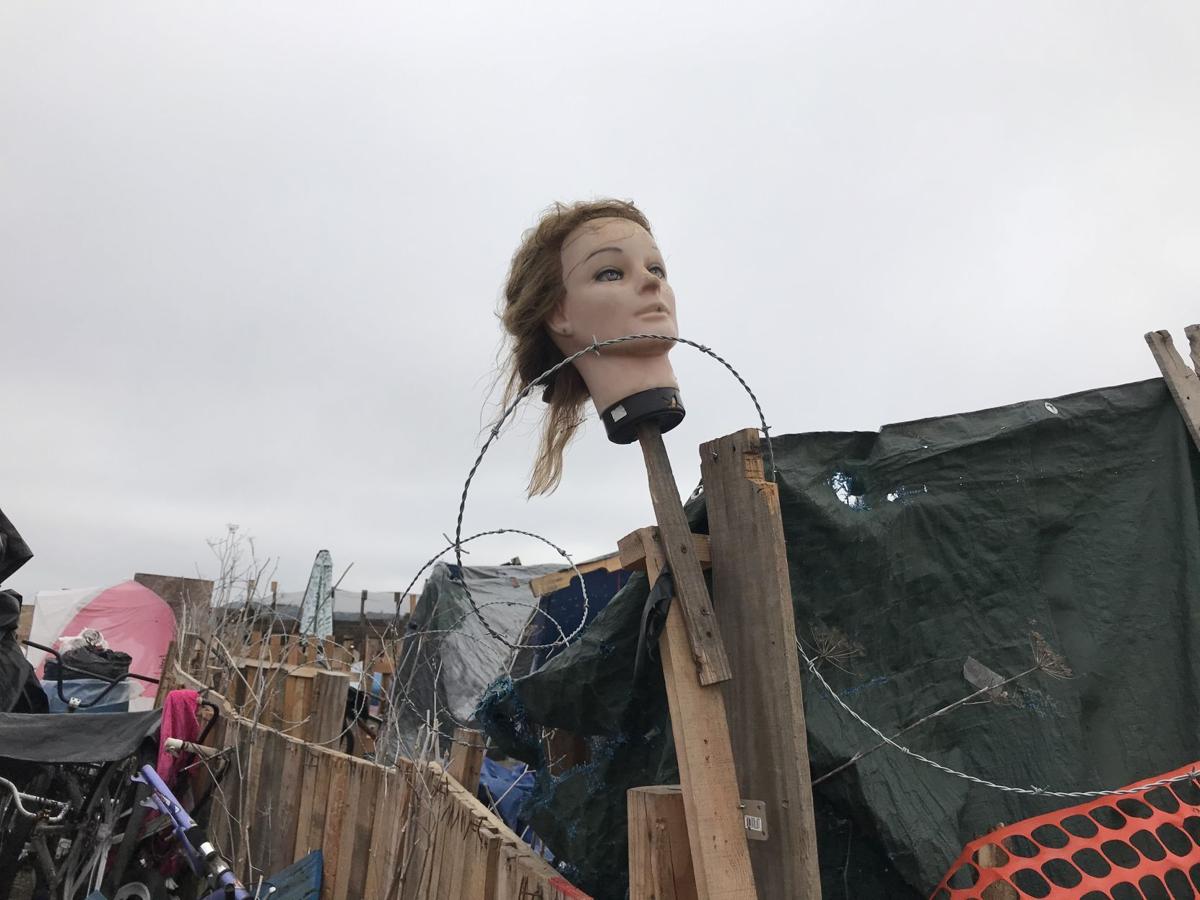 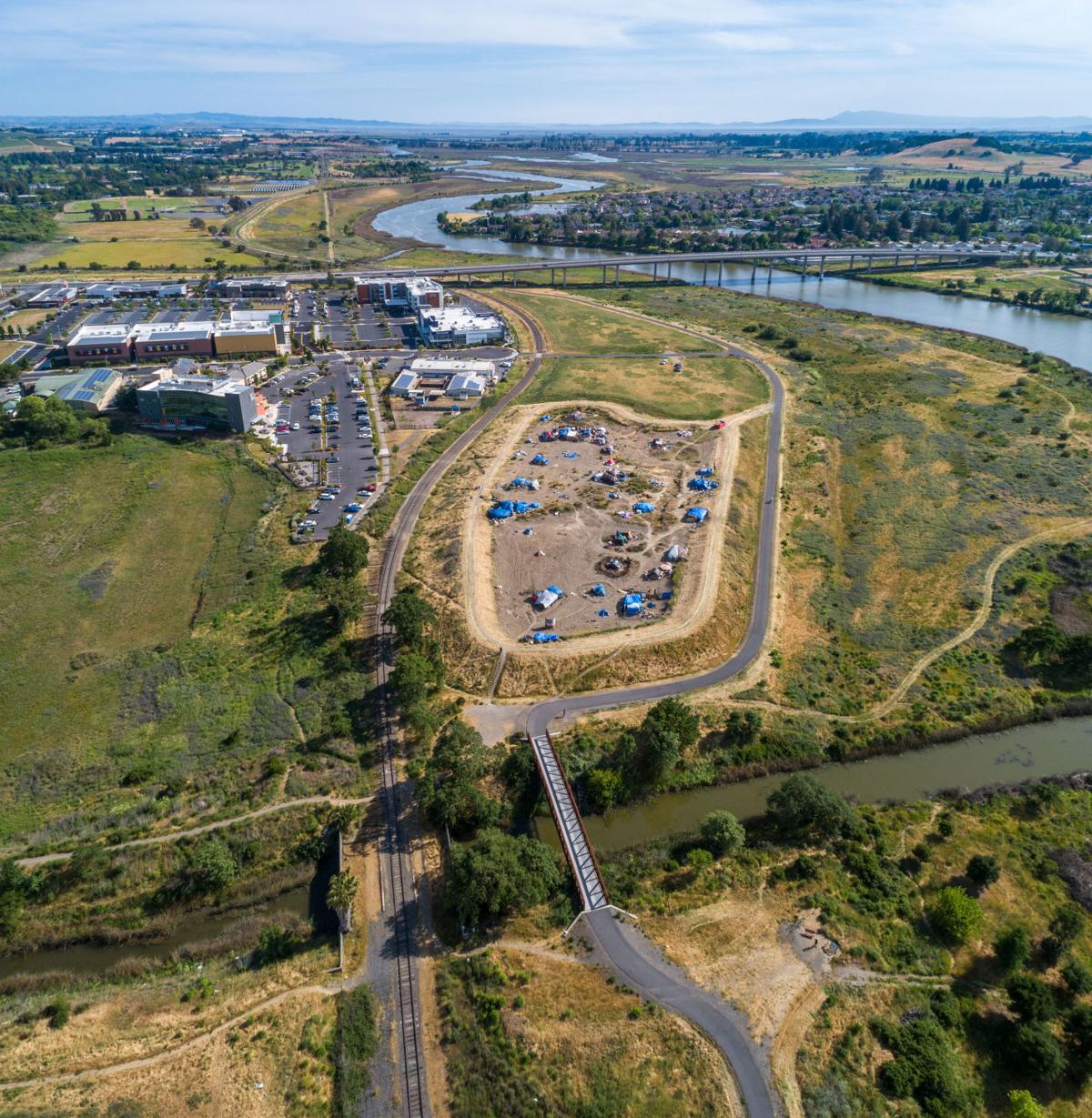 South Napa’s homeless camp, located in a large sunken pit between the river trail and the OLE Health parking lot, isn’t the kind of place most people would want to visit, let alone live.

Piles of clothing, bike parts, shopping carts and trash are scattered about the dirt. There is no running water or electricity. The closest bathroom is two portable toilets in the OLE Health parking lot. Plastic tarps, wooden pallets, tents, plywood, cardboard and other materials have been cobbled into makeshift living spaces.

It looks like something you’d see in a slum in another country — not the U.S. and certainly not world-famous Napa Valley.

Inside “the bowl,” as it is called, these residents have managed to create their own version of a neighborhood.

They’ve built rock paths, cut steps into the sides of the incline to get in and out, and fenced off groups of dwellings into shared spaces.

Look closer and there are other signs that people do live here: a makeshift outdoor kitchen with a barbecue, a dog bed, a stuffed animal, pairs of shoes neatly lined up outside a tent, a vase filled with flowers, easy chairs on a square of AstroTurf, and small gardens with flowers, vegetables and even grapevines.

One entrance to a group of tents featured a locked gate with bells hung on it, a carpeted pathway and rocks painted white and red. Another had a sign painted red with house numbers “2316” and a 49ers flag.

“Knock,” reads a message written on a homemade wooden fence. “Wait for response. If there isn’t one then leave don’t come in.”

Brandon Gardner is the homeless outreach coordinator for the Napa Police Department. He’s in charge of monitoring the desolate area.

The bowl is 1 to 2 acres and the area was built and holds dredge spoils from dredging the deep channel in the Napa River, said Gardner.

His goal is to find housing for the homeless, said Gardner. Some homeless people have found temporary housing at a local motel during the pandemic. Others are able to find rooms in private homes or apartments.

On Tuesday at 7 a.m., Gardner visited the camp with a reporter.

Compared to other homeless camps he’s seen, “this is pretty good,” he said. There are portable bathrooms and a trash area. The city pays for a cleaner to come through regularly and pick up abandoned tents and debris.

While not officially endorsed by the city, because officials want residents to shelter-in-place during COVID-19, the city doesn’t plan to dismantle the camp.

That Tuesday morning, the camp was quiet.

“Hello,” Gardner called out at each tent. “Outreach. Anybody home?”

Some residents inside the tents declined to answer. Others had already left for the day, headed to work or to get a shower at the South Napa Day Center, said Gardner.

At another tent, a dog barked. Someone could be heard snoring inside a different tent.

From inside her tent, one woman replied: “I’m not interested in talking.”

About 80% of the residents are men, said Gardner.

That includes C.O., age 56. This Napan said he didn’t want his full name to be in the newspaper or to be photographed. He used to stay in the homeless shelter, said C.O., “but I couldn’t make it in on time,” he said. The overnight shelter has a nightly curfew.

“Nobody wants to be out here,” said C.O. “I’m supposed to get housing but it hasn’t happened yet.”

C.O. said he works as a painter and plumber. He’s been living in the bowl for about five months.

C.O. said “I couldn’t pay my bills and got into gambling,” and lost his housing.

His tent in the bowl included a sleeping pad, a chair, some drums and other supplies.

C.O. said he doesn’t lock his tent when he leaves. Anyone who wanted to rob him “would just ruin my tent to get in,” he said.

“For the most part people are pretty respectful,” in the bowl, said C.O. Yes, there can be fights and arguments “but we work it out.”

The man said that he avoids the portable toilets in the parking lot “because the virus could be there.” Instead, he uses the showers and bathrooms at the South Napa Day Center or the nearby Chevron station.

Another bowl resident, L.C., said he’s lived in the camp for about four months. L.C. said he didn’t want to give his full name or be photographed.

Before he came to the bowl, he said he’d lived under a bridge in Napa. In the bowl, L.C. has built an elaborate dwelling with sturdy walls and an interior that includes an excavated area for seating and storage. At night, he uses candles and flashlights to see, said L.C.

He even put a lock on his door. “I don’t want nobody going in there when I’m gone,” he said. “That deters them.”

L.C. said he was from Napa but at one point he had a house in Alabama. He said he has a degree from Colorado Technical University in Colorado Springs. If he could live anywhere, he’d like to get that Alabama house back, he said.

What was his plan for Tuesday? “I’m going to go shower and charge my phone up real good,” he said. Then, he hoped to check on his unemployment claim.

Several other men with bikes at the edge of the bowl declined to be interviewed. They were just visiting friends in the bowl, said the men.

Outside of the bowl, in the OLE Health parking lot, stood Matthew Howle, 41, of Napa. He is temporarily homeless, “but I’d never stay there,” he said looking up at the bowl.

“There’s too much drug paraphernalia and theft,” in the camp, he said. Instead, Howle is living in his vehicle. He said he’s been on a waiting list for housing for about eight months.

Gardner wrote Howle’s name down and said he’d check into it.

Howle said people shouldn’t be allowed to camp in the bowl.

“It’s a bad image for the valley,” — especially to visitors, he said. “If the public knew what was happening up there they’d be opposed to it.”

Webinar to teach how to build an ADU in Calistoga

Calistoga homeowners and property owners are invited to register to attend to learn the nuts and bolts of building an accessory dwelling unit on Aug. 13.

The conversion of the ‘Green Church’ into the Brannan Community Center will move forward, with concerns about noise, parking, and the size and number of events unresolved.

The iconic Calistoga Depot is being painted white as part of on-going renovations that will include a restaurant called "The Waiting Room."

Wills, advance directives, and powers of attorney can be difficult things to talk about. UpValley Family Centers can help.

A Napa homeless camp was removed this past week. More removals are planned.

CDC guidelines say encampments should be allowed to remain if there isn't housing available for their residents.

Homeless and pregnant: One Napan's story

Crystal Ellis of Napa is pregnant and homeless. She hopes to find housing before she delivers her baby. This is her story.

A community of homeless Napans are living in RVs and other vehicles in a parking lot in North Napa. What's going on?

Nine months ago Crystal Ellis of Napa was homeless and pregnant, living in a tent by the Napa River. Today, everything has changed. 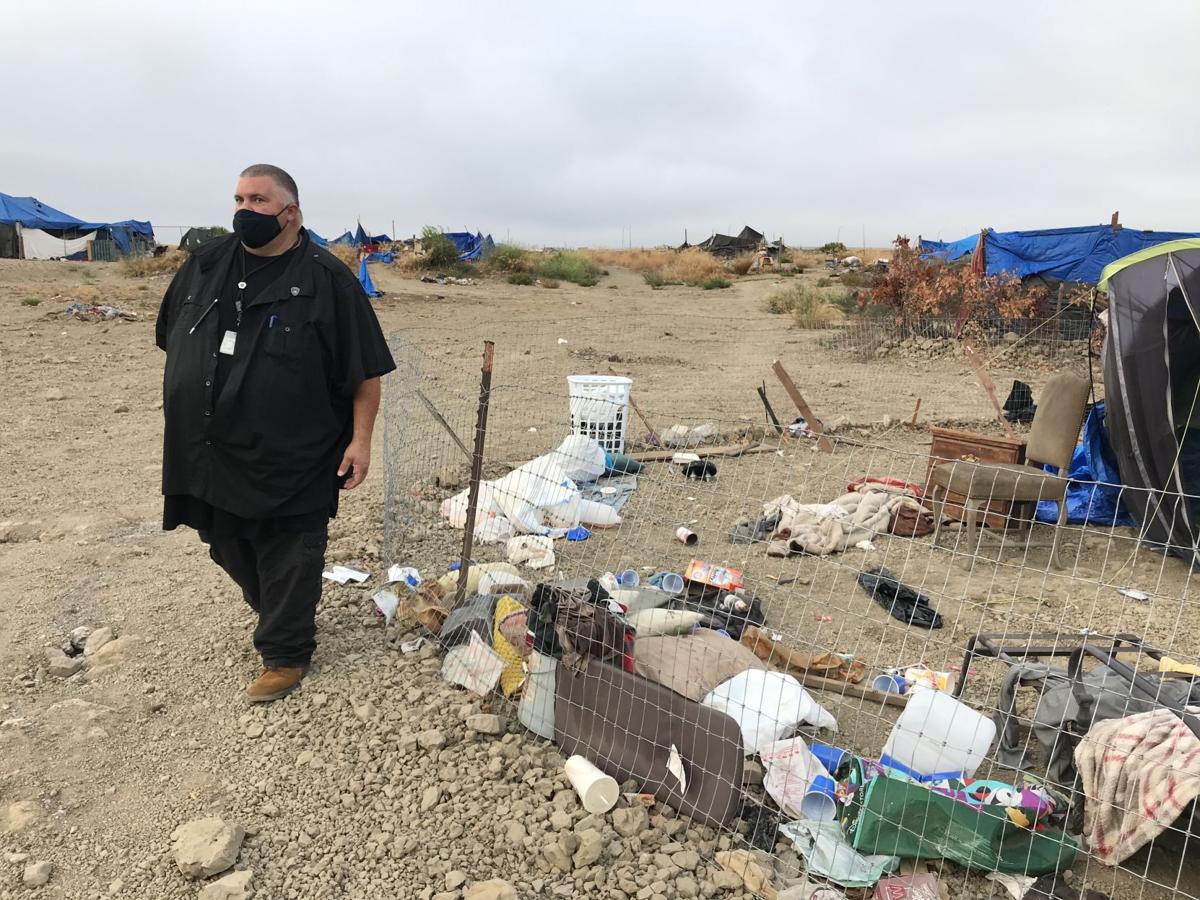 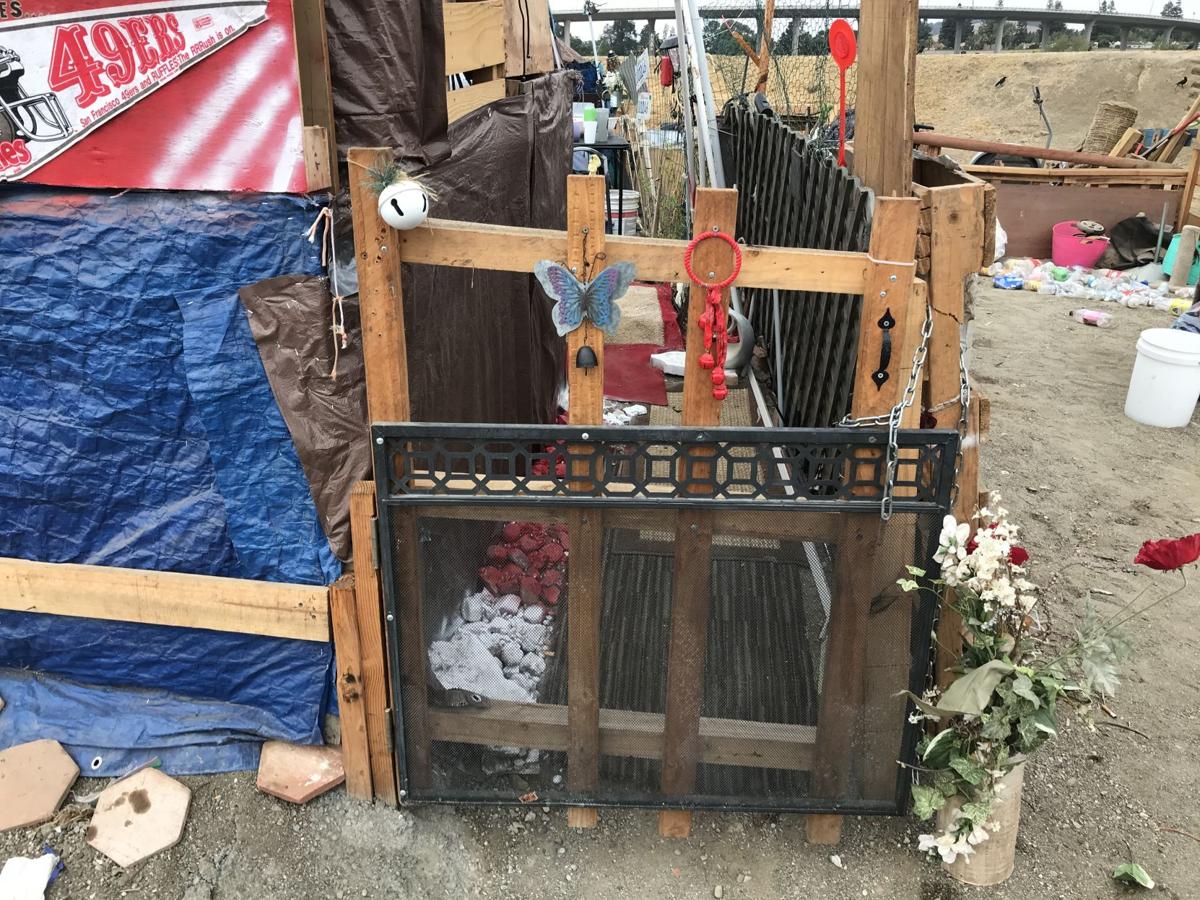 A gate and path have been created at this tented area in the Napa homeless camp called the "bowl." 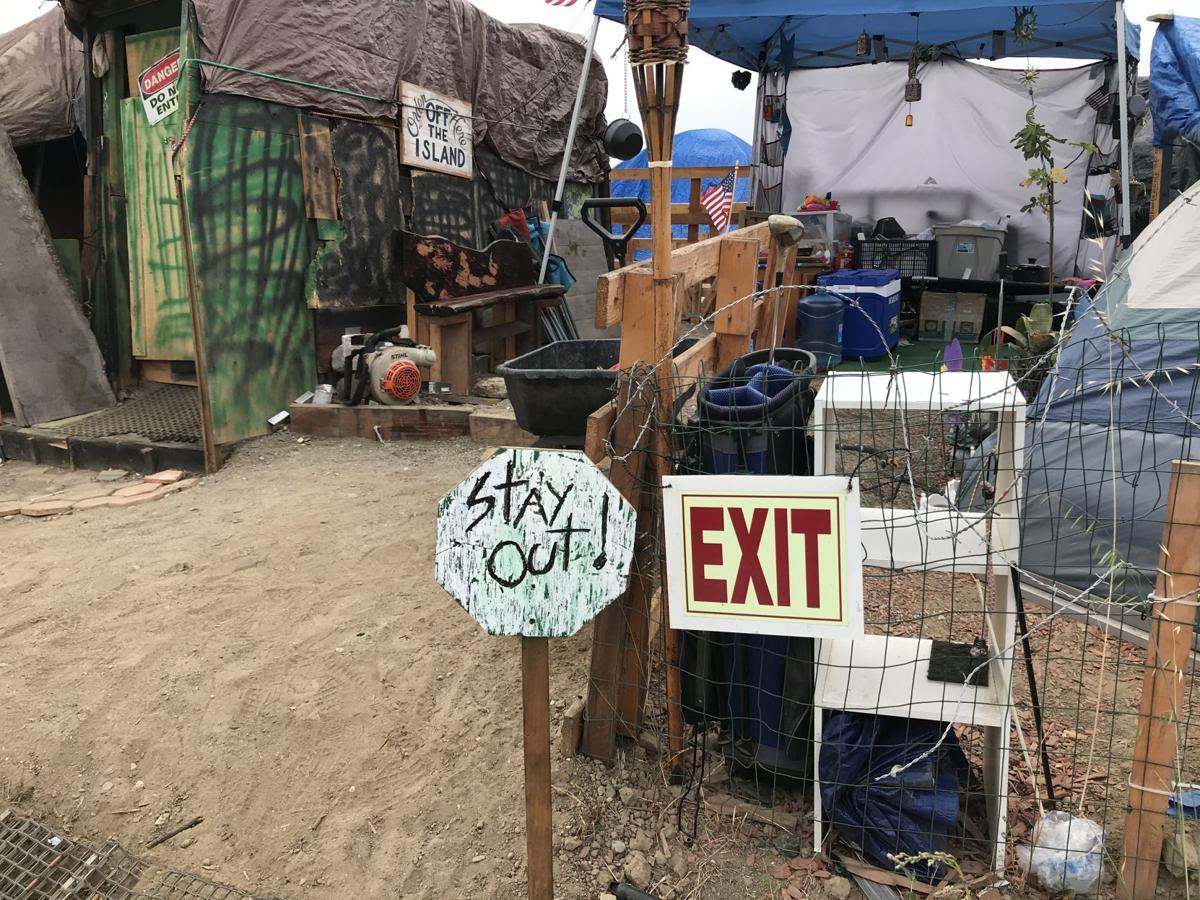 Residents at Napa homeless camp the "bowl" have created private, personal spaces with the area. 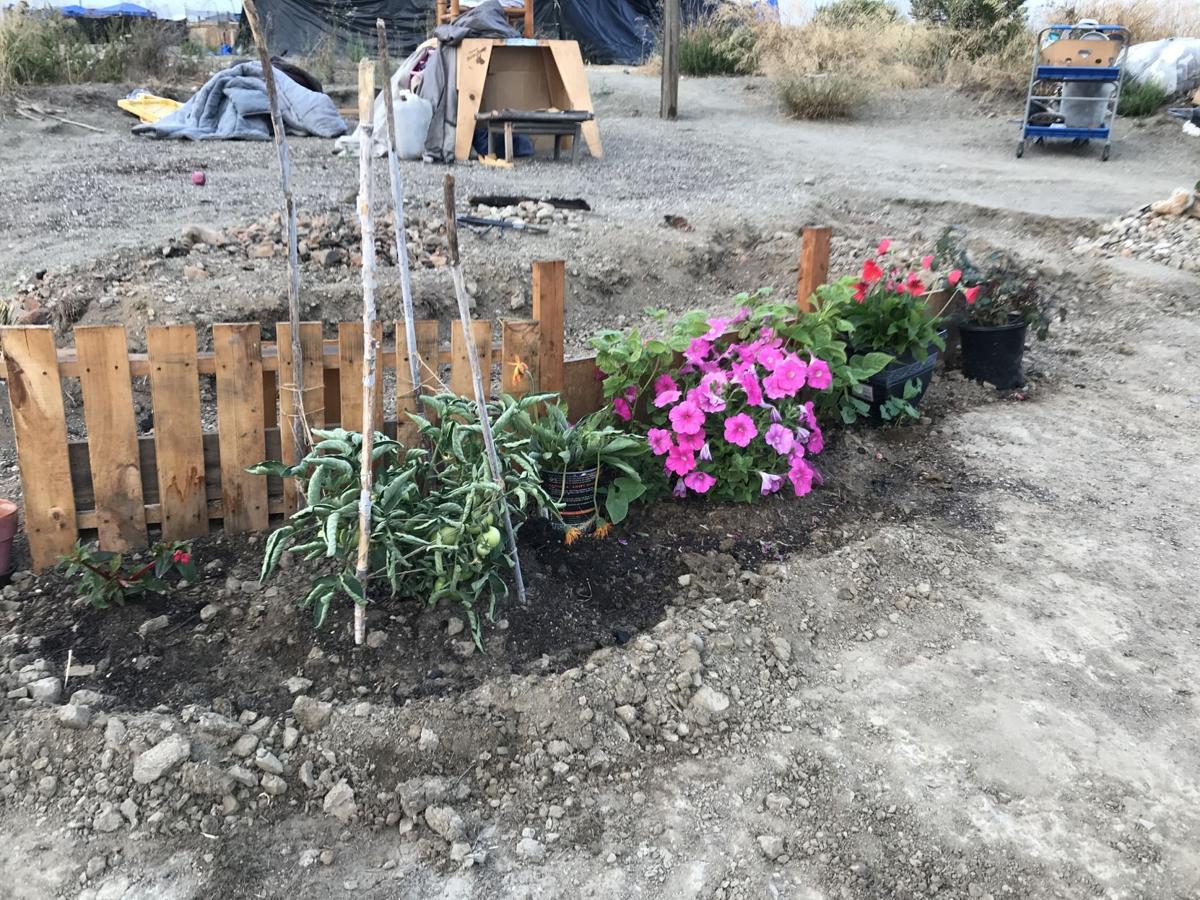 Someone in the homeless camp called the bowl has planted vegetables and flowers.