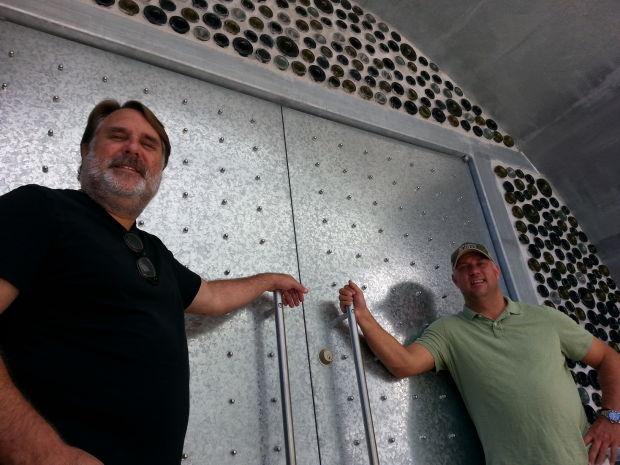 Jeff Smith, left, stands with winemaker Tony Biagi outside the entrance to the caves at Hourglass Winery's Blueline Vineyard. 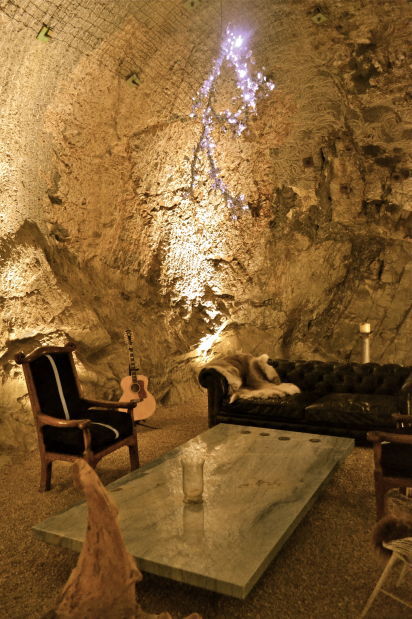 The "man cave" located within the wine caves of Hourglass Wines' Blueline Vineyard was a result of leftover dynamite. Vintner Jeff Smith said he hated to waste the dynamite leftover from creating the wine caves so they used it up and this room is the result.

The seeming simplicity of marrying the right vine to the right terroir to make great grapes for great wine is akin to the adage of knowing just enough about a subject to be dangerous — it sounds simple but there really is more to it than that. But there are those that infuse a little something else from their black bag to conjure up magic, such as Jeff Smith of Hourglass Wines who takes that simplicity to a very complicated level — the level of gut instinct.

At the gut level he understood what an expert told him about the soil at winery’s Hourglass location — that it combined great soil, wind, sun exposure and more — and it was instinctual that he comprehended what the winery’s Blueline vineyards could produce.

So it should come as no surprise that in his quest for synergy with the vines and terroir, he would look for the same synergy in a new winemaker.

“We have an awesome relationship and it shows through in the wine,” Smith said.

The two have been acquainted for years, encountering one another over winemaker lunches and such, and over time they became friends, compatriots in their quest to make delicious wine.

Hourglass was cut on the teeth of the winemaking prowess of Bob Foley — think Pride Mountain, Switchback Ridge and his own label — who was the winemaker, but was spread thin, and over the years there came a time when Hourglass recognized it needed the attention of a full-time winemaker. And that’s when Smith turned to Biagi.

They have a similar palate and vision in what they want to deliver in terms of wine. Their delivery in talking about the wines and winery diverge. Smith is effervescent, the face of the winery and happy to step out in front to claim it as he does with his rock band Wristrocket, while Biagi seems comfortable stepping back, pitching in only when words need to be spoken, otherwise he seems content to do what he loves; make wine. It’s clear by his bio that this is his calling. He has focused on Bordeaux varietals in the Napa Valley and has a combined almost 10 years of experience with the Plumpjack Group at Plumpjack and Cade wineries.

Hourglass, which has a vineyard just south of Calistoga called Blueline — next to Switchback Ridge and across from Duckhorn’s Three Palms Vineyard — and the famed Hourglass vineyard, which is just north of St. Helena, has been producing stellar wines for years, and now the winery is among the many merlot producers to return the varietal to a post-"Sideways” status of a sought-after varietal.

California soils, compared to European soils, elicit flavors of licorice and nodding to the vineyards over his shoulder at the Blueline property, Smith said the merlot block soils include “bone white, ashy, compressed volcanic rock.”

The fractured bedrock, valley floor, fog, breezes, all of which contribute to a “spiciness and energy in the mid-palate,” he said.

The ingredients of the whole process are what continue to garner 90-plus point scores for much of Hourglass wines from such esteemed publications and wine critics as Wine Spectator, Robert Parker, and more.

Every vintage is an experiment in Smith’s mind who says Napa doesn’t have 150 years of history to rely on for experience, plus there’s a stylistic shift onboard.

“We’re walking that razor-thin edge,” in shifting styles, he said.

“We make wines that taste like California,” Biagi said.

And nobody at Hourglass is apologizing for that.

Something nobody in this region thinks is necessary.

Jeff Smith, left, stands with winemaker Tony Biagi outside the entrance to the caves at Hourglass Winery's Blueline Vineyard.

The "man cave" located within the wine caves of Hourglass Wines' Blueline Vineyard was a result of leftover dynamite. Vintner Jeff Smith said he hated to waste the dynamite leftover from creating the wine caves so they used it up and this room is the result.