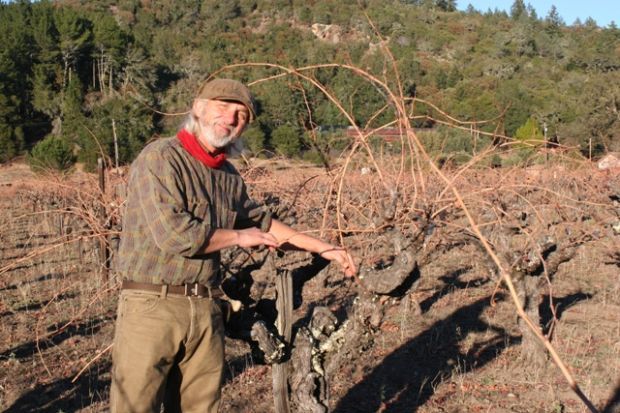 Vince Tofanelli in his vineyard in Calistoga showing off vines that do not grow on a trellis and have no drip-line system. He farms the old world way. Cynthia Sweeney/The Weekly Calistogan 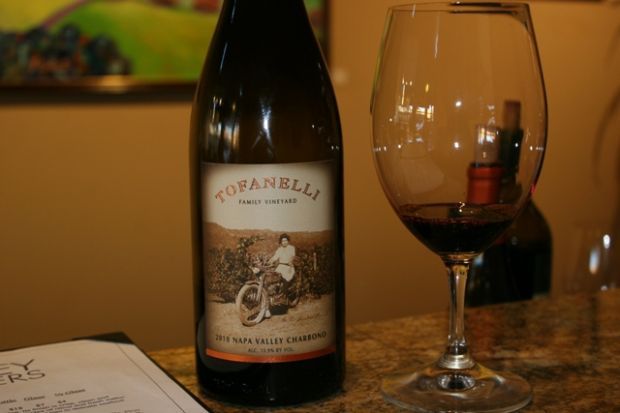 The Tofanelli label was designed by Vince’s sister Norma, and is a snapshot of their grandmother posing on their grandfather’s 1915 Harley-Davidson. Cynthia Sweeney/The Weekly Calistogan

The first thing Vince Tofanelli will tell you about winemaking is that it starts with the vines.

“This is an ancient way of growing,” he said. “We tend to forget that in Napa where every vine is on a trellis. But this is the way the ancient Romans farmed. For me, it’s more of a natural way to grow grapes that has been proven for hundreds of years.”

Up until about 70 years ago, all of Napa looked like the Tofanelli Family Vineyard looks today; free-standing vines with no trellises or drip lines.

The result? Small vintage wines that you won’t find at a box store or at Safeway. It’s the very definition of terroir, the way the wines taste because of where and how the grapes are grown.

The Napa region is steeped in wine history and the Tofanelli vineyard is no exception. The craving for wine, he explained, is tied to the California Gold Rush era, when Europeans, mainly Italians immigrants, came here to work the mines and wanted a taste of home. They carried their grape farming technology with them, which consisted of free-standing vines.

In 1929 Tofanelli’s grandparents bought 21 acres of land in Calistoga. From a young age he learned this tradition of dry farming on the family’s DiGiulio Ranch. As he grew older, this method of farming still resonated with him.

Around 1970, however, things in Napa started to change. With the advent of drip lines, vintners gained control of climate stress on the grapes. The harvester and grape pitching machines, which reduced the need for field labor, also meant increased yields and increased profits. Also at that time, California wines were beginning to compete on a global level. Thus, control factors took off. Smaller wineries sold out to the bigger conglomerates and Napa was off and running on the world winemaking map.

“Everything shifted,” said Tofanelli, a bit wistful. “We lost a little bit of soul.”

One of Tofanelli’s earliest concerns was that as he succeeded as a vintner he would be tempted to sell out. But quality turned out to be more important than quantity. Today he sells his grapes to other vintners and keeps about one-fifth of the acreage for producing wine under the family label, and is content producing relatively small quantities of wine, about 1,000 cases a year.

“Are they (conglomerate wineries) successful? By some people’s standards, yes. Are they happier? I don’t see that. I stick to my guns without compromise. What’s happening in the bottle is more important than the label,” he said.

Having stuck to his guns, however, has not been without some duress. As the vineyard is farmed without irrigation, is he concerned about the recent drought, which could be a record-breaker?

“Sometimes I wonder about that business sense,” he mused. “There is cause for concern but I’ve gone through a number of droughts with this system and we’re OK.”

Tofanelli’s vines have root systems that are 84 years old and never had the luxury of a drip line. They have survived due to drought-resistant root structures that newer vines do not have. The root systems have adapted to weather patterns. In the past, after a third year of drought, Tofanelli was surprised to find his vines were actually producing more fruit and longer vines.

In a sense, the roots “learned” to deal with the dry weather. This phenomenon is backed up with science, he explained.

“Instead of outgrowth, more energy was being put into the roots. They were ready for it (the drought),” he said.

Because these vines are farmed organically, to deal with mildew, mold and spider mites, Tofanelli doesn’t have the palette of chemicals that other farms use. Instead, he treats the vines with sulfur and “crazy bacterium” that attack larva and fungus spores. After this last harvest he felt the vines needed a shot of fertilizer. Instead of hiring a crew, he hand-fertilized each vine himself, which took him about a week.

“I’ve touched every one of these vines. I visited each one. It was a bit of therapy,” he said with a smile. “This is much more than a job, you can see that.”

Being that close to the vines really hit home when in the 1980s he had to take out some vines planted by his grandfather back in 1929. In doing so he was taking a risk by pulling out some cherished but unprofitable vines and planting a new crop: Charbono.

“That was the hardest lesson. Really tough choices. I felt more like a caretaker at a museum than a businessman. I still feel like that, but sometimes you need to pay taxes.”

In a place where cabernet is ubiquitous, Tofanelli grows zinfandel, grenache, petite sirah and the esoteric Charbono. Charbono is a red wine, almost opaque purple in color, full-bodied with a rich texture and long finish. It would go well with pasta and mushrooms, Tofanelli noted, as he always thinks of wine and food together.

Very few people are making Charbono, so it fits into Tofanelli’s program and has an appreciative following. He doesn’t advertise, instead relying on word-of-mouth. He’s happy to find the aficionado who can appreciate the passion and creativity that goes into his wines. One afternoon a week you can find him at the Up Valley Vintners Tasting Room in downtown Calistoga, a consortium that features his wine.

Tofanelli recently sought to broaden his horizons by dabbling in white wine and even a rose. Fans of Tofanelli wines can look forward to his first white wine being released next year, a Smenelli Sauvignon-Blanc.

“It’s interesting to broaden your horizons. I’m rounding out my portfolio. True to my nature it’s not a chardonnay,” Tofanelli said with a smile.

Where to find Tofanelli grapes

Aside from his own label, Tofanelli grapes can be found in Buccella Wines, Orin Swift Cellars, Morlet Family Vineyards, Duckhorn Cellars, The …

Vince Tofanelli in his vineyard in Calistoga showing off vines that do not grow on a trellis and have no drip-line system. He farms the old world way. Cynthia Sweeney/The Weekly Calistogan

The Tofanelli label was designed by Vince’s sister Norma, and is a snapshot of their grandmother posing on their grandfather’s 1915 Harley-Davidson. Cynthia Sweeney/The Weekly Calistogan