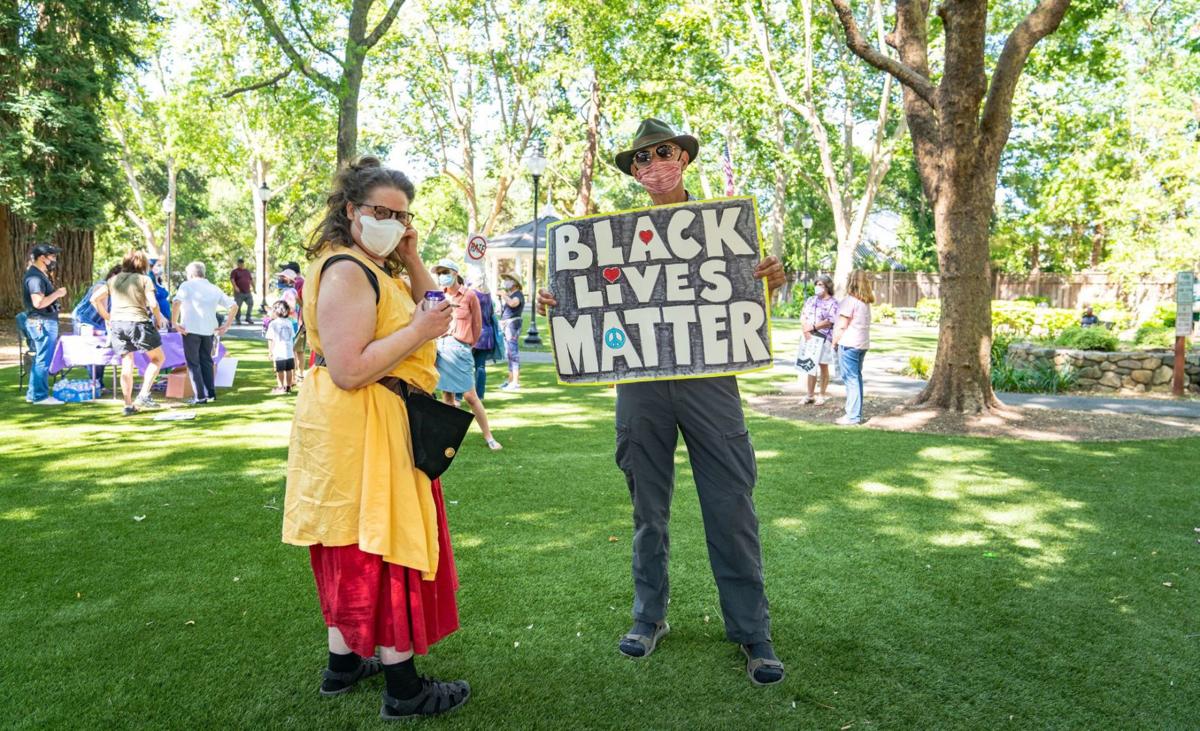 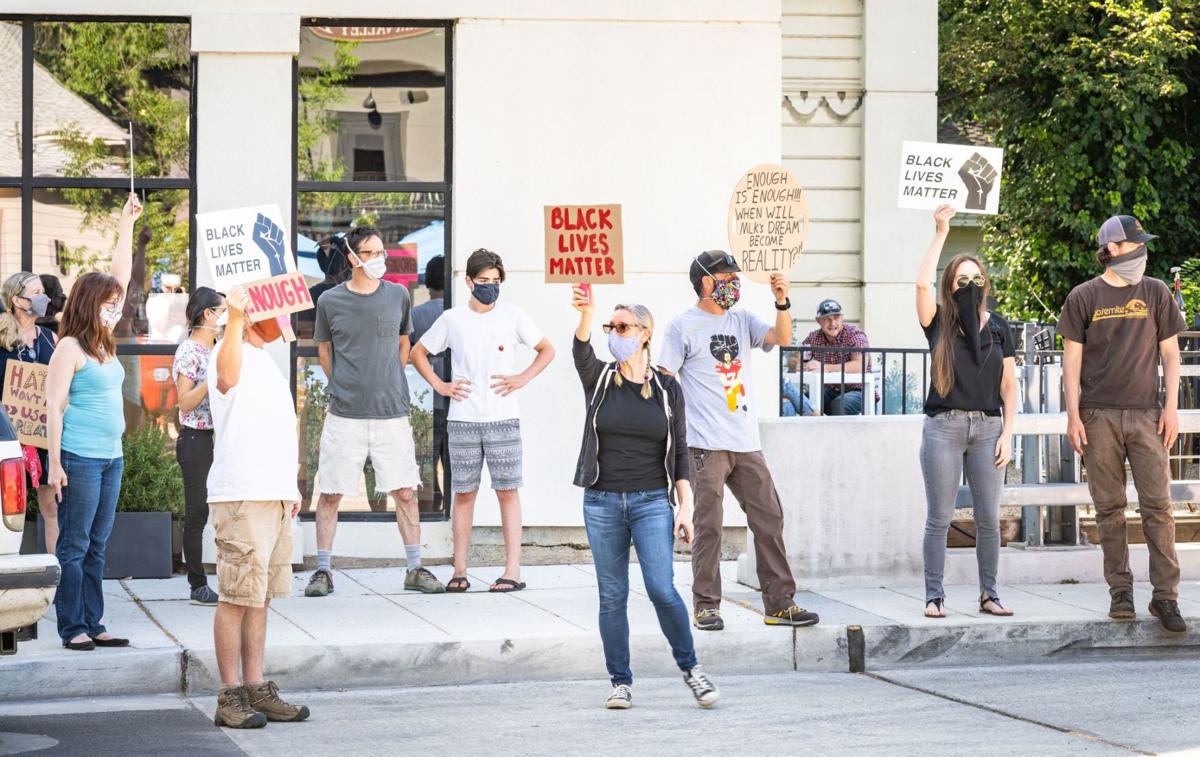 Peaceful demonstrators waved signs and chanted in support of Black Lives Matter on the Lincoln Avenue Bridge in Calistoga on June 20, as drivers honked in support. 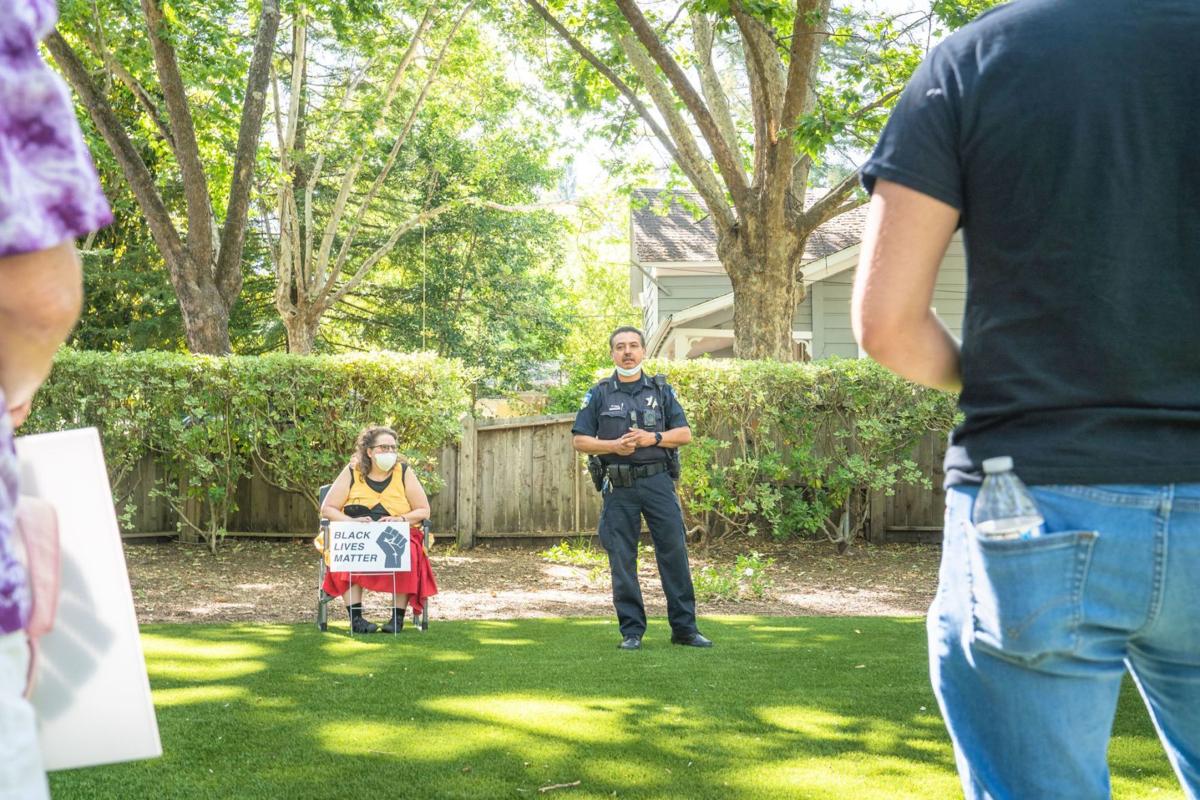 Police Chief Mitch Celaya told BLM protesters on Friday that the Calistoga Police Department has created a culture that is "very community-centered." 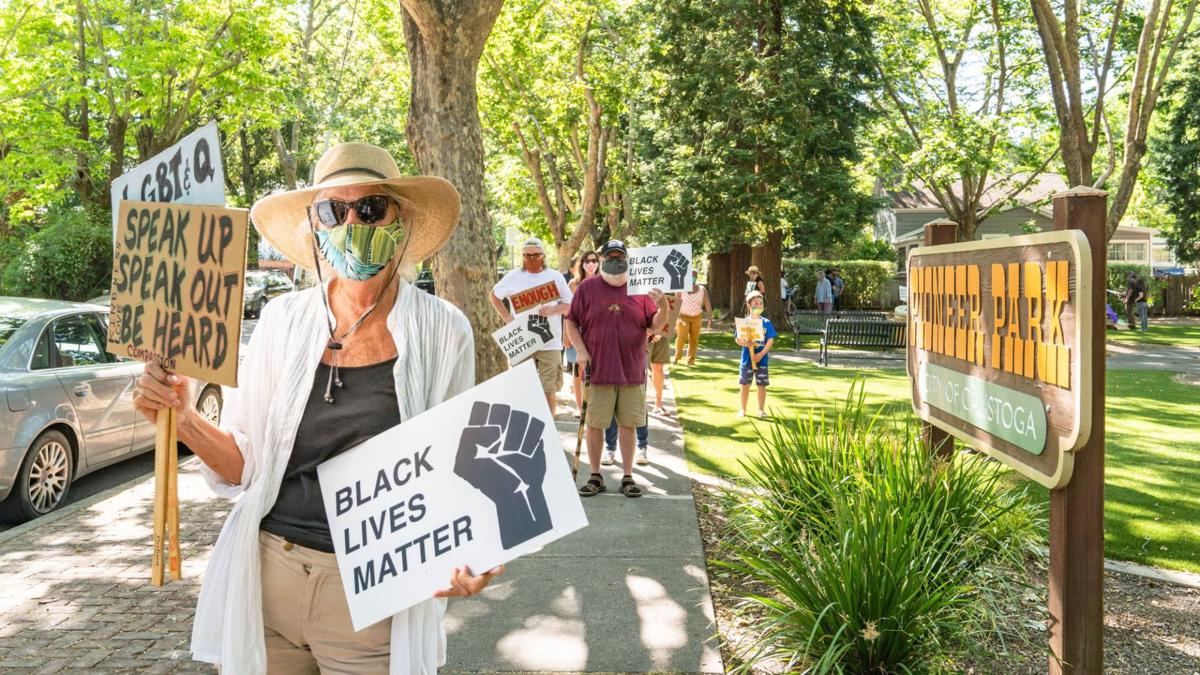 On June 20-21, Calistogans participated in peaceful protests carrying signs and chanting from Pioneer Park to the Lincoln Avenue Bridge. 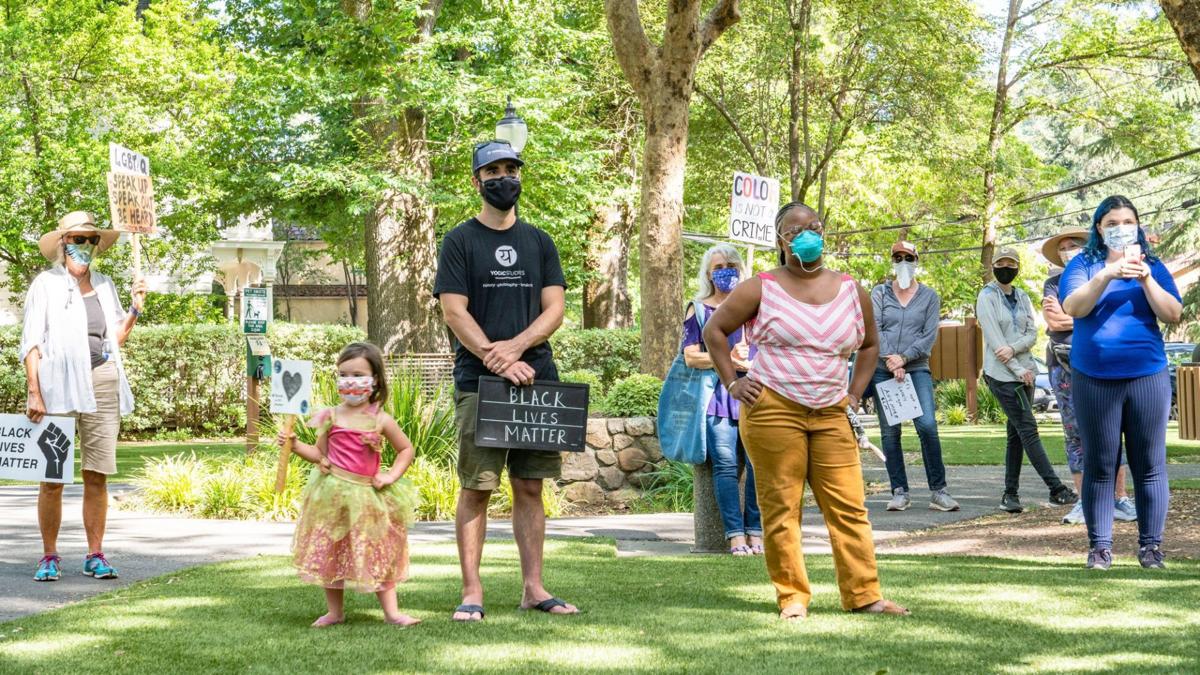 Friday's peaceful protest in Calistoga for the Black Lives Matter movement drew demonstrators of all ages. 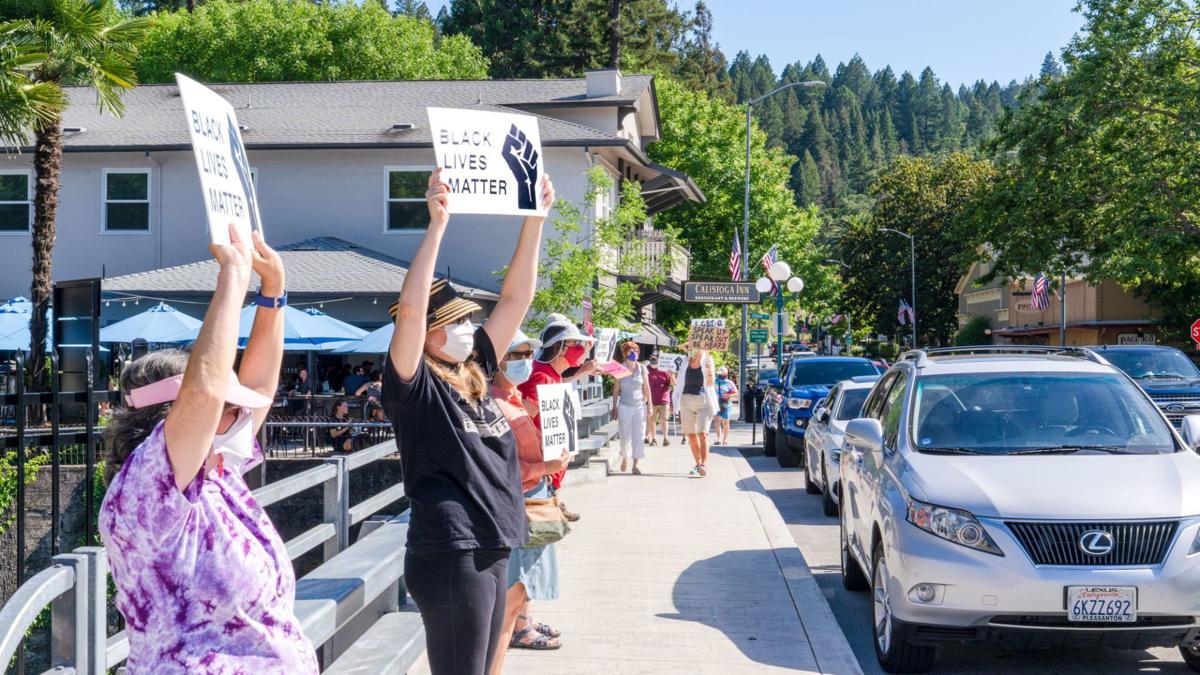 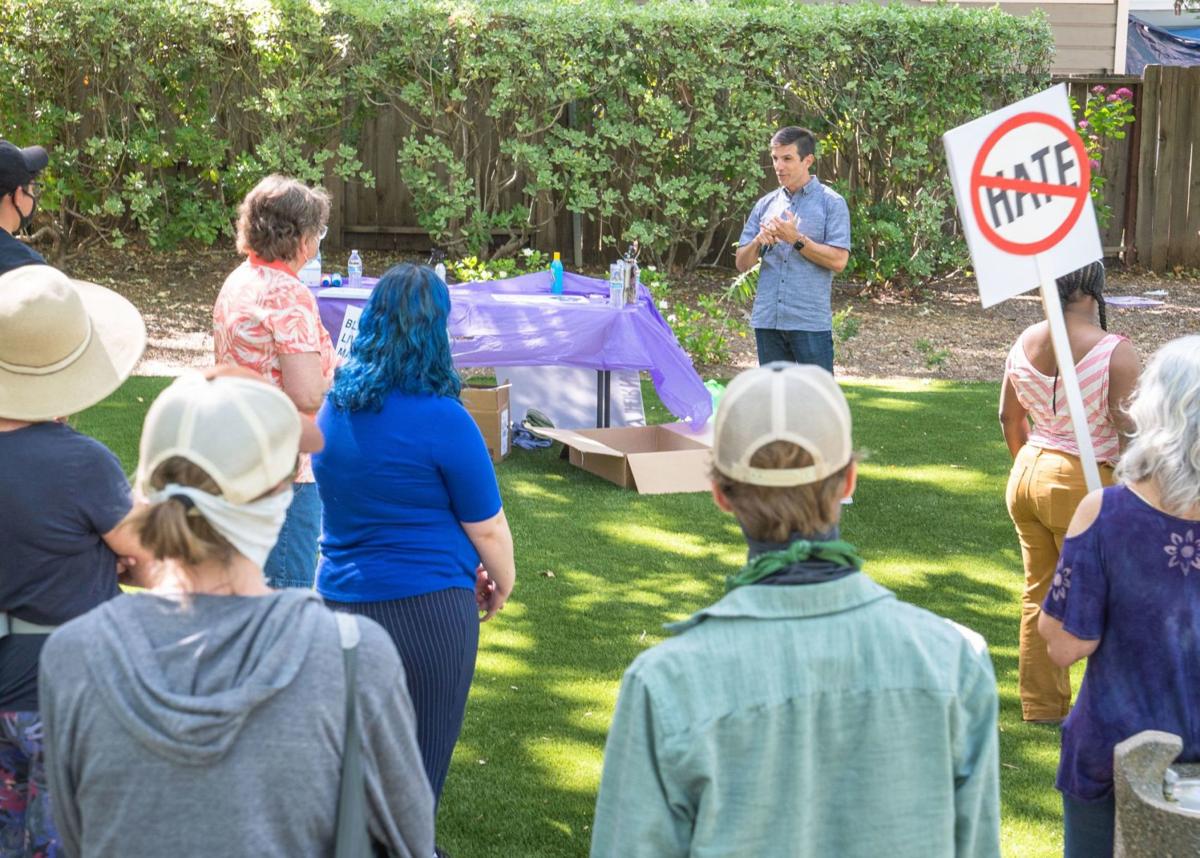 Calistoga Mayor Chris Canning addressed the crowd of BLM protesters in Pioneer Park on June 20, saying the community is fortunate to be "collectively supportive" of one another.

Calistoga is a small, ethnically diverse community that has been spared the violent protests associated with the murder of George Floyd by a police officer. Still, residents were motivated to stage peaceful protests on Friday and Saturday in support of the Black Lives Matter movement sweeping the nation and the globe.

About three dozen demonstrators turned out over the weekend, starting at Pioneer Park, where they chanted and carried signs to the Lincoln Avenue Bridge. Many of those driving by honked and shouted their support.

Mayor Chris Canning, speaking to the crowd at the park, praised the protesters, saying, “It’s good to get out of our little bubble.”

He also said he has been receiving texts and phone calls regarding the nation-wide call to defund police departments. Such a measure is not needed in Calistoga, however, where there has been no escalated procurement of military-type equipment within the department.

Canning also spoke in support of Police Chief Mitch Celaya, who came to Calistoga after a 30-year career as police captain at UC Berkeley.

“You could not find a more progressive police chief,” he said.

As an example, Calistoga was the first police department in the county to adopt body cameras for its officers. Since video of police encounters has become available, arguments of police brutality have steeply declined in the city, Canning said.

Celaya also spoke briefly to the protesters, saying the department is very community-centered.

“I’m blessed to work in this supportive community. Not all communities are like that,” he said. There is room for improvement across the nation, “But we’ll get there.”

Celaya also said the issue of police brutality hits close to home. He has two African American sons whom he worries about when they go out in the world, he said. “This is something that needs to be brought out there and paid attention to.”

Canning also noted that his brother is a police officer on the East Coast.

The mayor also spoke to the national push to implement ‘8 Can’t wait’, or eight use-of-force policies to reduce violence. He outlined many that have already been in place within the department including a de-escalation process, a ban on chokeholds, a duty to intervene, extensive reporting requirements, and “the last resort is hostility,” he said.

Asked if the city has a civilian review board, Canning said one hasn’t been needed, with next to no incidents where the city has had to intervene with officer conduct.

Canning also noted with the population almost 50/50 Hispanic and Caucasian, “We are by far the most diverse population in Napa County. We live in a special place and are not impacted (by recent violence.) We work collectively to take care of one another,” he said.

Officials: More than 250 marched in Napa on Sunday against police brutality

Calistoga welcomes two new police officers and the retention of Chief Mitch Celay for another year.

After string of Napa protests against police brutality, We Back Blue rally supports law enforcement

Supporters of law enforcement officers rallied Wednesday on Napa's Third Street bridge, steps from where anti-racism, anti-brutality protests have played out for the last three weekends.

Protesters against police violence return to Napa, and seek to create future change

Demonstrators returned to downtown Napa on Sunday for their third protest against police brutality and racism since the death of George Floyd.

Peaceful demonstrations against racism and police brutality continued this week in St. Helena and Angwin.

Photos as seen in The Weekly Calistoga, the week of June 25

Here's a look at what was happening in Calistoga the week of June 25.

Letters: Thanks for working to end it.

The Advising Dean: Continuing the challenging conversation on race

Conversations about race are difficult, but needed. As Americans we can examine our biases and change ourselves or not.

BLM activities give us all a chance to pause

“These are the descendants of survivors of genocide which took place throughout northern California.”

A memorable road trip led to a lifetime of joy, awe, and appreciation of cultural diversity.

Calistoga’s Silverado Pharmacy on Lincoln Avenue was broken into early in the morning on July 16.

Fourth Friday Walk for Democracy is back, meeting at noon, Friday, Aug. 28, in front of Calistoga Library.

Peaceful demonstrators waved signs and chanted in support of Black Lives Matter on the Lincoln Avenue Bridge in Calistoga on June 20, as drivers honked in support.

Police Chief Mitch Celaya told BLM protesters on Friday that the Calistoga Police Department has created a culture that is "very community-centered."

On June 20-21, Calistogans participated in peaceful protests carrying signs and chanting from Pioneer Park to the Lincoln Avenue Bridge.

Friday's peaceful protest in Calistoga for the Black Lives Matter movement drew demonstrators of all ages.

Calistoga Mayor Chris Canning addressed the crowd of BLM protesters in Pioneer Park on June 20, saying the community is fortunate to be "collectively supportive" of one another.