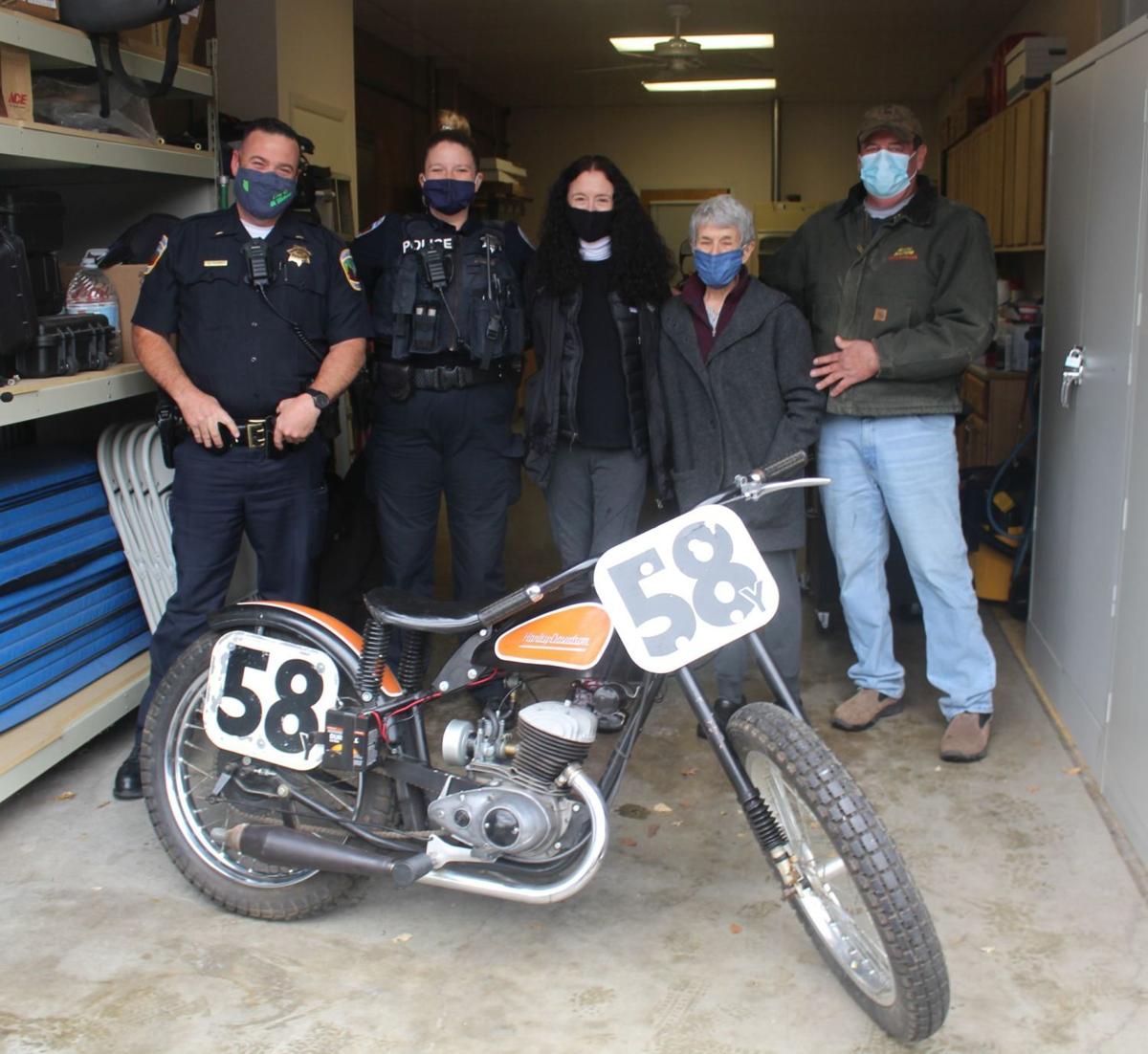 Members of the St. Helena Police Department recovered a stolen motorcycle and returned it to the family of the late Jack Christianson, who had restored it. From left are Lt. Justin Tharp, Officer Melissa Brown, Julie Christianson, Helen Christianson, and family friend Paul Roussopoulos. 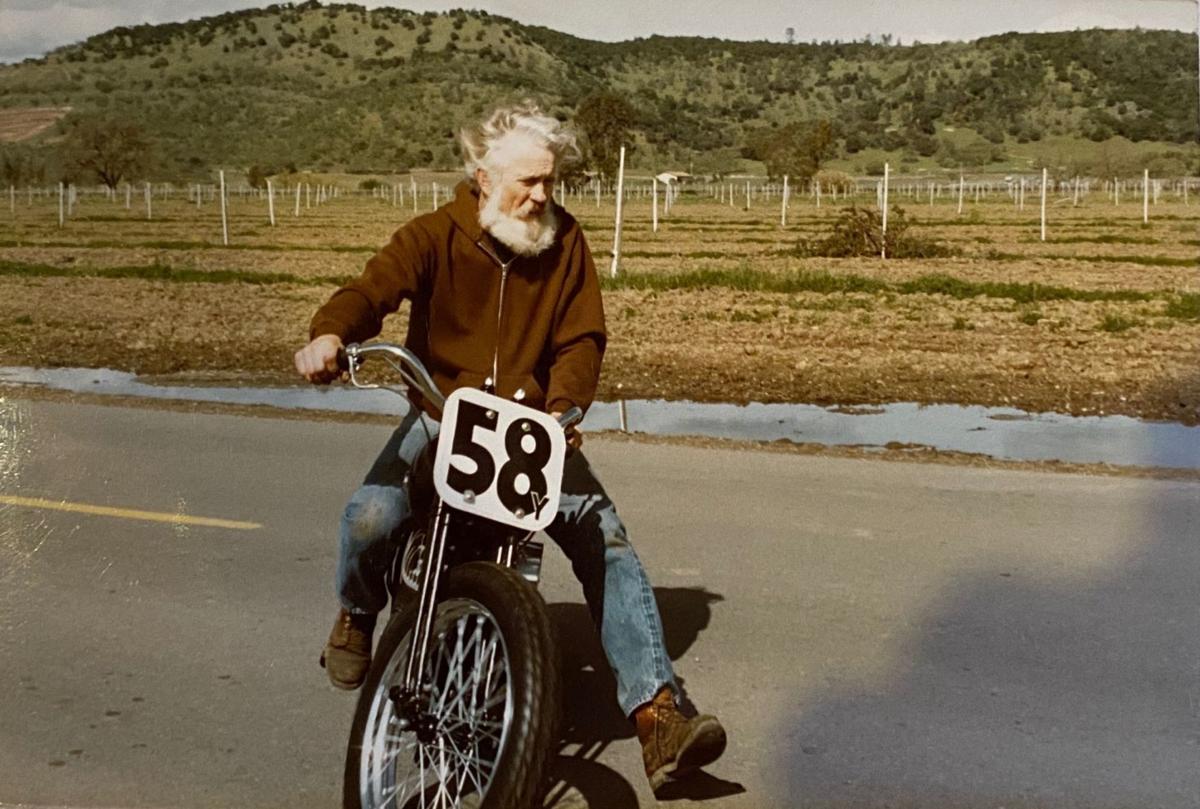 Jack Christianson rides one of the many Harley-Davidsons he restored over the years. 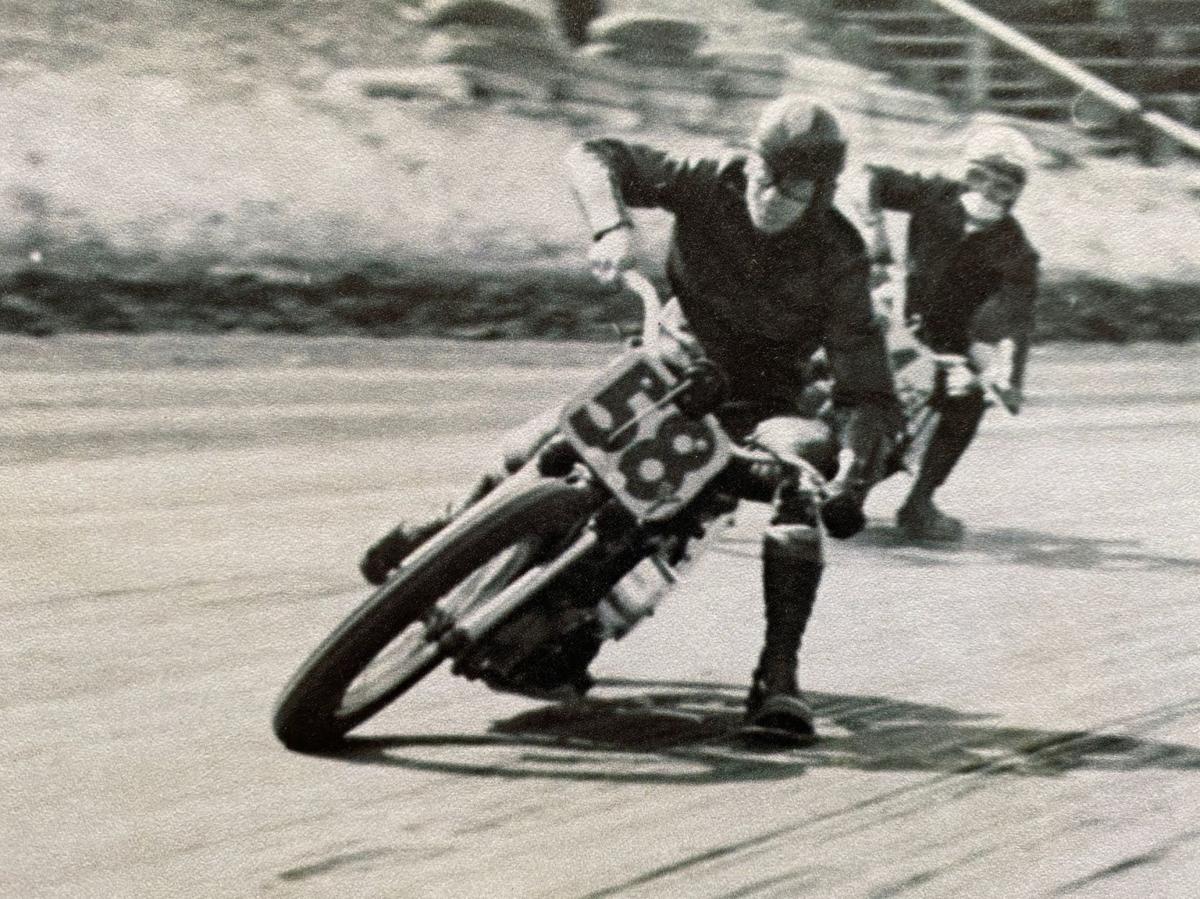 Before starting a family, the late Jack Christianson raced Harley-Davidsons on flat tracks throughout the country.

With a big assist from the St. Helena Police Department, the Christianson family was overjoyed last week to recover the bike, which was restored by the late Jack Christianson.

“This bike is a testament to his passion and his talent,” said Julie Christianson, Jack’s daughter. “It’s a physical representation of my father that has so much sentimental value.”

A mechanical whiz, Jack Christianson worked on nuclear submarines at Mare Island Naval Station before spending the rest of his career working on farm equipment at Beckstoffer Vineyards. In his early years he used to race Harley-Davidsons on flat tracks around the country, and while he gave that up when he started a family, restoring Harleys became his passion.

Toward the end of his life, Christianson donated all but two of his Harleys to the Dudley Perkins Co. Harley-Davidson dealership in San Francisco.

After Christianson died in 2006, those last two bikes remained in the shop next to his house. His wife, Helen, was awakened by a prowler one night in May 2018, and it wasn’t until months later that her son, John, discovered that one of the bikes was missing.

The loss was a tremendous blow to the family. The bike was still missing when John Christianson was killed by a reckless driver in 2019.

Then in early March, Paul Roussopoulos, a close friend of the Christiansons who’d worked for Jack at Beckstoffer, found the stolen Harley for sale on Craigslist. It had been seemingly untouched, right down to Jack’s old #58 racing placard.

St. Helena Police Officer Melissa Brown posed as a buyer, met the seller in Napa and retrieved the stolen bike. The Christianson family, accompanied by Roussopoulos, picked it up from the St. Helena Police Department last Thursday, just three days after Julie’s birthday.

“I can’t say enough about Melissa,” Julie said. “She’s been wonderful, and we’re so grateful to her.”

The motorcycle seems to have changed hands several times before popping up on Craigslist, and the seller is not a suspect. The Christianson family has some suspicions about who stole it, but police have made no arrests in connection with the theft, and the case remains under investigation.

For now, the family is just happy to have Jack’s bike back.

“To get it back after almost three years — it’s astonishing,” Julie said.

THE WEEK IN CARTOONS

With the sale of the Napa County Fairgrounds still up in the air, the County has been negotiating with OLE Health for possible space on the property.

Carol Bush has been operating North Star on Lincoln Avenue for 40 years this month. That longevity has brought life-long relationships with friends, neighbors.

Police said the suspect took vehicle keys from businesses when no one was looking.

The man, who had been missing overnight, was found Thursday morning.

The owner of the stolen car spotted it being driven in Napa three days later, police said.

The defendant is being held on $2 million bail pending sentencing on April 29.

Members of the St. Helena Police Department recovered a stolen motorcycle and returned it to the family of the late Jack Christianson, who had restored it. From left are Lt. Justin Tharp, Officer Melissa Brown, Julie Christianson, Helen Christianson, and family friend Paul Roussopoulos.

Jack Christianson rides one of the many Harley-Davidsons he restored over the years.

Before starting a family, the late Jack Christianson raced Harley-Davidsons on flat tracks throughout the country.