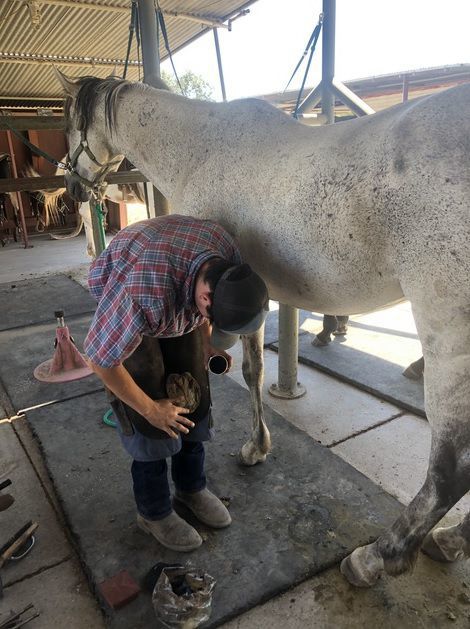 Sebastián Verbera of Pope Valley is training to become a farrier, or someone who works on horse hooves. This past summer, he had been enrolled at the the Pacific Coast Horseshoeing School in Plymouth, California. 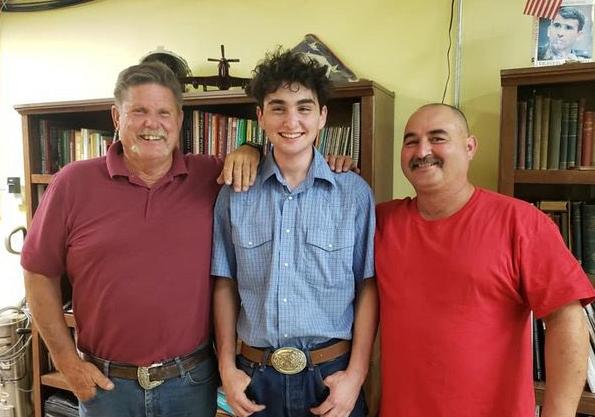 Sebastián Verbera (center) with his father Roberto Verbera (right) and Bob Smith from the Pacific Coast Horseshoeing School in Plymouth, California. Sebastián is training to become a farrier and plans to make that his career after he graduates from St. Helena High School in 2020.

Although Sebastián Verbera has just started his senior year at St. Helena High, this almost 17-year-old not only knows what he plans to do after graduation — he’s already training and working in his field.

Verbera is a farrier, a craftsman who trims and shoes horses’ hooves. So is his father and grandfather, making Verbera the third generation in his family to choose such a career.

The young man, who lives in Pope Valley, said that he grew up around horses and horseshoeing.

“I’ve been doing it since I was 12,” said Verbera. He likes the temperament of most horses, and the idea of being his own boss. “I don’t think I could see myself doing anything else.”

But not all horses are like that, he said. “You can’t let one ruin it all for you.”

This summer, Verbera has spent the past two months at the Pacific Coast Horseshoeing School in Plymouth.

It happens to be the same equine farrier school his father, Roberto Verbera, graduated from in 1995.

That training includes some instructional time but Verbera prefers the hands-on work.

“I’ve never really been the kind of person who enjoys being in the classroom” for very long, he said.

The normal tuition for the eight-week program runs about $6,000, according to the school website. Verbera said he received a scholarship.

“At first, I was a little hesitant” about giving up his summer for the training, the student said. Because he’d move into a dorm at the farrier school in Amador County, he knew that meant he’d see a lot less of his friends and family back in Napa.

“But I made a new group of friends here,” he said. Of the six students total, three are around his age. “It’s like a little family.”

Verbera said one of the most common questions he gets is to explain what a farrier is.

“I just say I take shoes off horses and trim their feet and put shoes back on.”

People often wonder if shoeing or trimming a hoof hurts the horse, he said. The answer is no. “It’s basically like cutting their fingernails,” said Verbera.

Nailing on a horseshoe shouldn’t hurt either, he said.

“If you’re doing everything right, the horse won’t feel a thing.”

And not every horse wears shoes, he noted. “A lot of horses are barefoot.” In that case, he just trims the hoof itself, said Verbera.

People sometimes ask Verbera if he’s ever been injured while working.

“I’ve been stomped on,” but nothing worse, he said. Luckily, “It doesn’t happen too often.”

And if a horse isn’t cooperating, he can always decline the job, said Verbera.

This apprentice farrier said he will most likely charge $50 for hoof trimming, $150 for front feet shoeing and $200 for all four shoes.

Once he’s working full time, Verbera said he estimates he’ll work on as many as five horses a day. “That’s a pretty good average.”

At first, he’ll partner with his dad. “He has lot to teach me and I have a lot to learn,” said Verbera.

After that, the new farrier hopes to build his own clientele.

Between Napa and Sonoma County, there are enough horses to keep him busy, said Verbera.

“There will always be work,” he said.

Sebastián Verbera of Pope Valley is training to become a farrier, or someone who works on horse hooves. This past summer, he had been enrolled at the the Pacific Coast Horseshoeing School in Plymouth, California.

Sebastián Verbera (center) with his father Roberto Verbera (right) and Bob Smith from the Pacific Coast Horseshoeing School in Plymouth, California. Sebastián is training to become a farrier and plans to make that his career after he graduates from St. Helena High School in 2020.