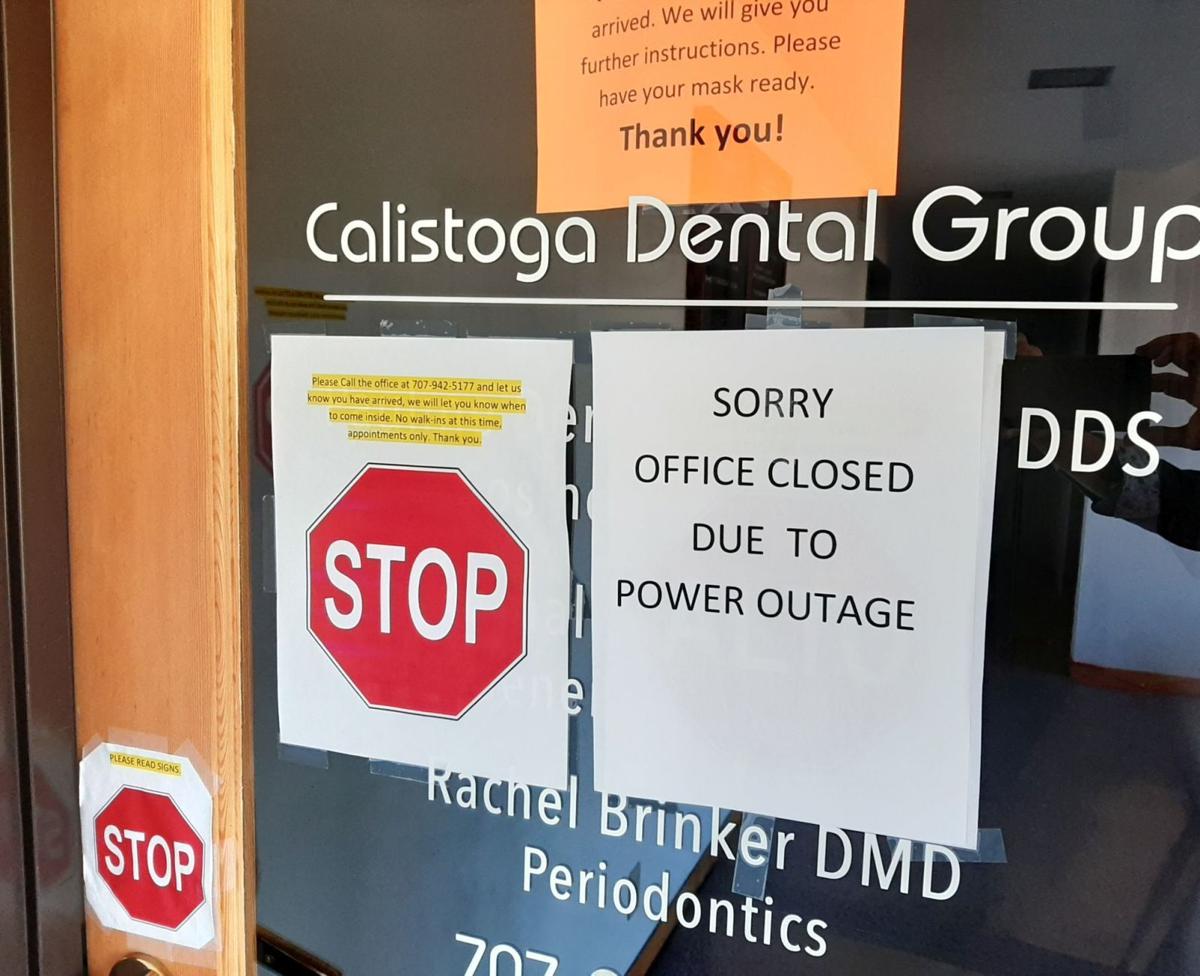 Homes and businesses on the west side of Calistoga were without power Monday as part of PG&E's pre-emptory shutdown Sunday affecting 11,026 Napa County customers. Some businesses brought in generators. Calistoga Dental Group was closed. 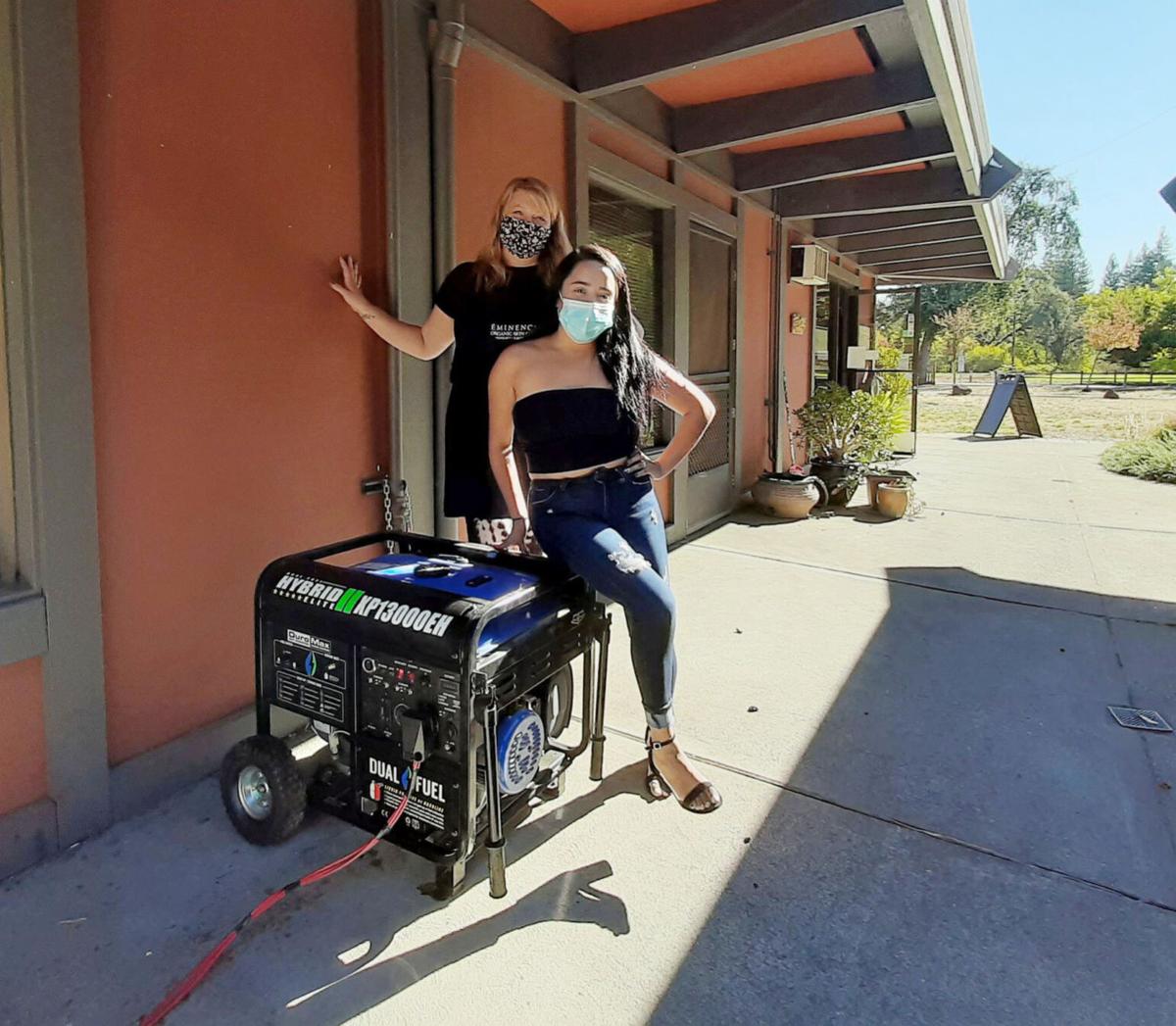 360 Salon & Day Spa owner Kyla Terry, rear, and stylist Liz Hernandez pose with the generator that has been powering lights and blow dryers during PG&E PSPS events. The salon is on the west side of town, which is not powered by the city's main generators. 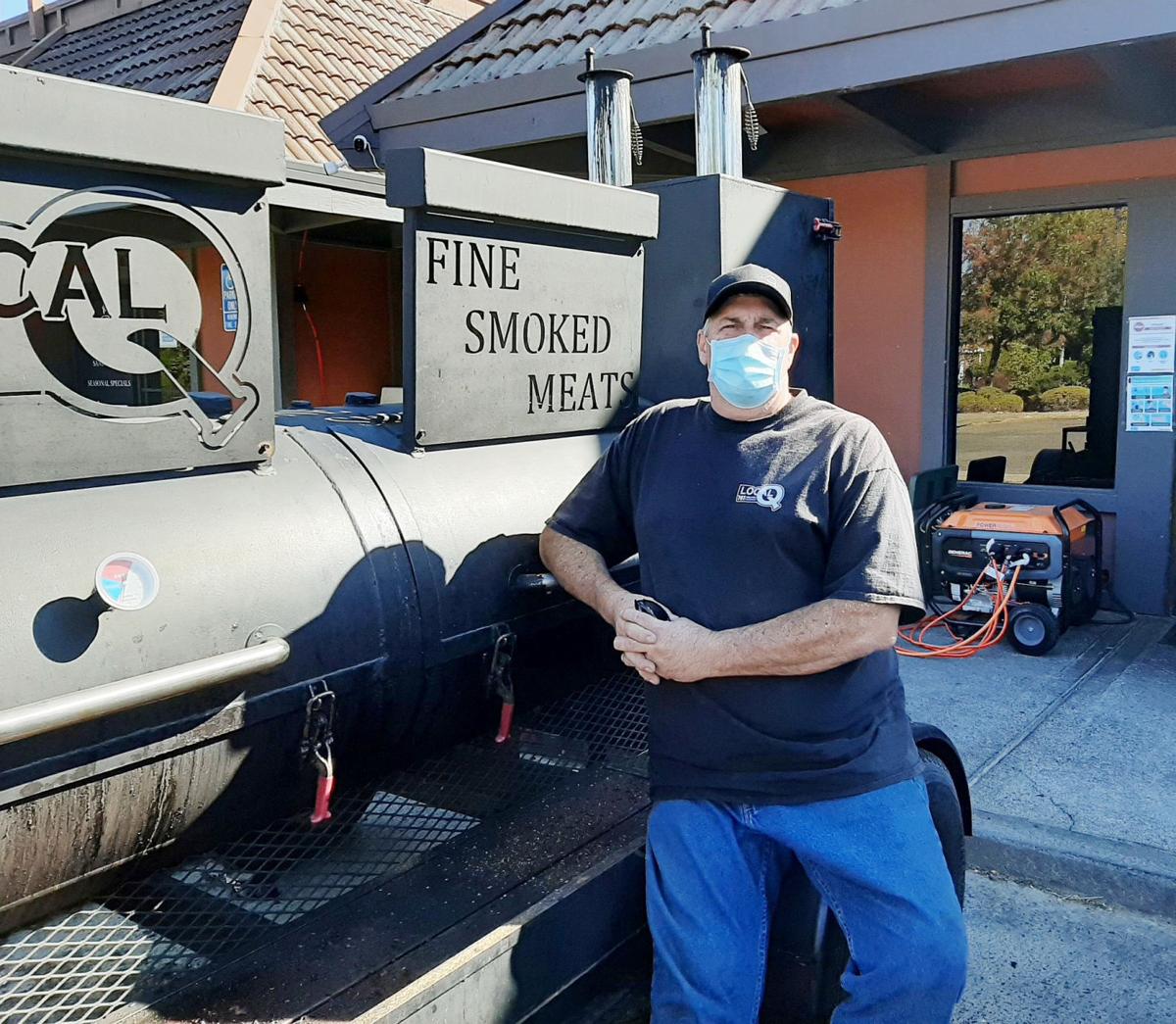 On the west side of town, Local Q 707 restaurant owner Rob Sereni can only power up a couple of appliances with a generator during PG&E's PSPS events which can last several days.

Calistoga has been operating on two sets of generators for the past several weeks, since the Glass Fire damaged the transmission mains that deliver electricity to the town.

Even so, that still leaves the west side of town without power during PG&E’s Public Safety Power Shutoff (PSPS) events.

The utility installed new diesel-powered backup generators on lower Washington Street that went online at the end of August, at a cost of $4 million to the company, however, the town has also been operating on generators installed at the substation on Highway 29, according to City Manager Mike Kirn.

“It is my understanding that the city is, and has been, powered by the lower Washington generators since the evening of Sept. 29 for both non-PSPS events and PSPS events. The Hwy. 29 Substation Generators were installed and put into service on or about Oct. 2.”

Complicating matters, PG&E initiated yet another PSPS event on Sunday that was due to last until Tuesday night, as the forecast called for high winds, leaving the west side of Calistoga once again without power.

The new generators still only energize the town east of the Napa River. Power boundaries are defined by PG&E, and the west side of town is very close to tiers 1 and 2, which are at greater fire risk.

In the past, businesses in Riverlea Square Shopping Center at the corner of Petrified Forest Road and Foothill Boulevard have gone without power for as long as a week.

“We haven’t been able to open because we can’t run all of our equipment inside,” said Local Q owner Rob Serini. “Right now the generators are just keeping the refrigerators and freezers cold. We’re just scrambling right now.”

During previous PSPS events Serini said he just closed the restaurant. But he did plan on opening Tuesday by erecting a tent outside and cooking on a grill.

“No French fries or anything like that,” he said, adding he hoped to be fully operational for take-out by Friday.

Serini said he purchased the generator after losing six cases of hamburger during a previous PSPS event. The power outages also play havoc with how much food to order from suppliers.

Behind the restaurant, 360 Salon & Day Spa has also been running on a small generator that minimally powers lights and blow dryers, said owner Kyla Terry. The generator also serves to power the refrigerator and freezer next door at Soul Rebel Coffee, owned by Terry’s husband, Nick Gutierrez.

Clients that come to the salon share their feelings about the fires and PSPS events, with a few “crying in the chair,” Terry said.

“They’re feeling for all the people who are affected. ‘What can we do to help? How will this get better?’” she said.

Terry and Gutierrez also live in the neighborhood. Gutierrez has been making pots of coffee and giving them to neighbors who don’t have hot water during the PSPS event.

“Our motto is, take it day by day,” Terry said.

Keep the generators on

Letter: Writer is against a petition to turn the town's backup generators off at night.

Peter Kay and Terry Goldin are installing a microgrid that will power up their Cedar Street home during further PG&E power shut off events.

Pacific Gas and Electric Company is on track to complete a microgrid that will provide temporary power to most of downtown Calisotga.

Still no damage to Calistoga from the Glass Fire, mandatory evacuation remains

Expected overnight winds did not materialize and the fire remained relatively static. At this time there has been no fire or fire damage within the city limits, and the evacuation order is still in place. The Glass Fire is at 5% containment.

Calistoga Firefighters save the day for visitors during recent PSPS event

Wisconsinite is grateful the Fire Department provided a workspace for her 2nd-grader to attend online classes during last week's PSPS.

Calistoga's Nixle alerts: An outstanding way to serve the community

All the county's governments have improved their crisis communication since 2017, but Calistoga stood out amid the Glass Fire.

PG&E: Essentially all Napa County customers had their power restored by Tuesday night

PG&E reported a peak gust of 82 mph Sunday night on the Napa/Sonoma line.

California wildfire victims in line for $25,000 payments from PG&E trust this month

Victims of Napa's Atlas and Partrick fires in 2017 qualify for early payments.

From the editor: It's the Calistoga spirit

Despite the challenges of 2020, the editor cites examples of Calistoga's enduring community spirit.

The Calistoga voting center was "very busy" on Tuesday as residents cast their ballots in the 2020 election.

Letter: Councilmember Don Williams shares an email he sent to PG&E regarding the generators.

Planned power outage for parts of Calistoga on Friday, Nov. 13

PG&E is planning a power outage between 10 p.m. Friday, and 5 a.m. Saturday, as the company conducts a power transfer.

PG&E is planning a power outage starting at 10 p.m. Saturday, lasting no later than Monday evening, as the company conducts a power transfer.

The City of Calistoga had some harsh words for PG&E on Tuesday, as officials met with representatives of the company to problem solve on-going power outage issues.

An improving weather forecast has led PG&E to remove all Bay Area counties, including Napa, from a planned power shutdown Monday and Tuesday.

Residents may experience power outages as PG&E continues to replace power poles and equipment throughout December.

The new dog park on south Washington Street shares its location with the temporary PG&E generators when they are needed.

Homes and businesses on the west side of Calistoga were without power Monday as part of PG&E's pre-emptory shutdown Sunday affecting 11,026 Napa County customers. Some businesses brought in generators. Calistoga Dental Group was closed.

360 Salon & Day Spa owner Kyla Terry, rear, and stylist Liz Hernandez pose with the generator that has been powering lights and blow dryers during PG&E PSPS events. The salon is on the west side of town, which is not powered by the city's main generators.

On the west side of town, Local Q 707 restaurant owner Rob Sereni can only power up a couple of appliances with a generator during PG&E's PSPS events which can last several days.