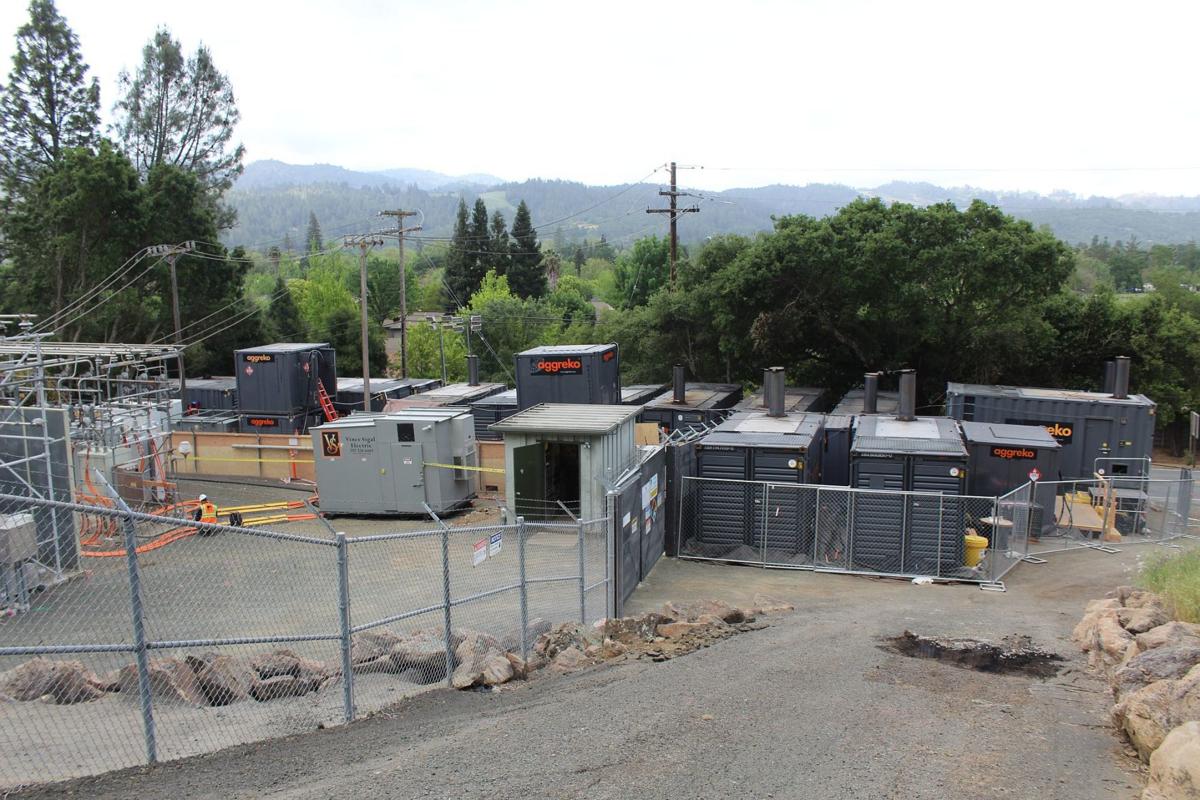 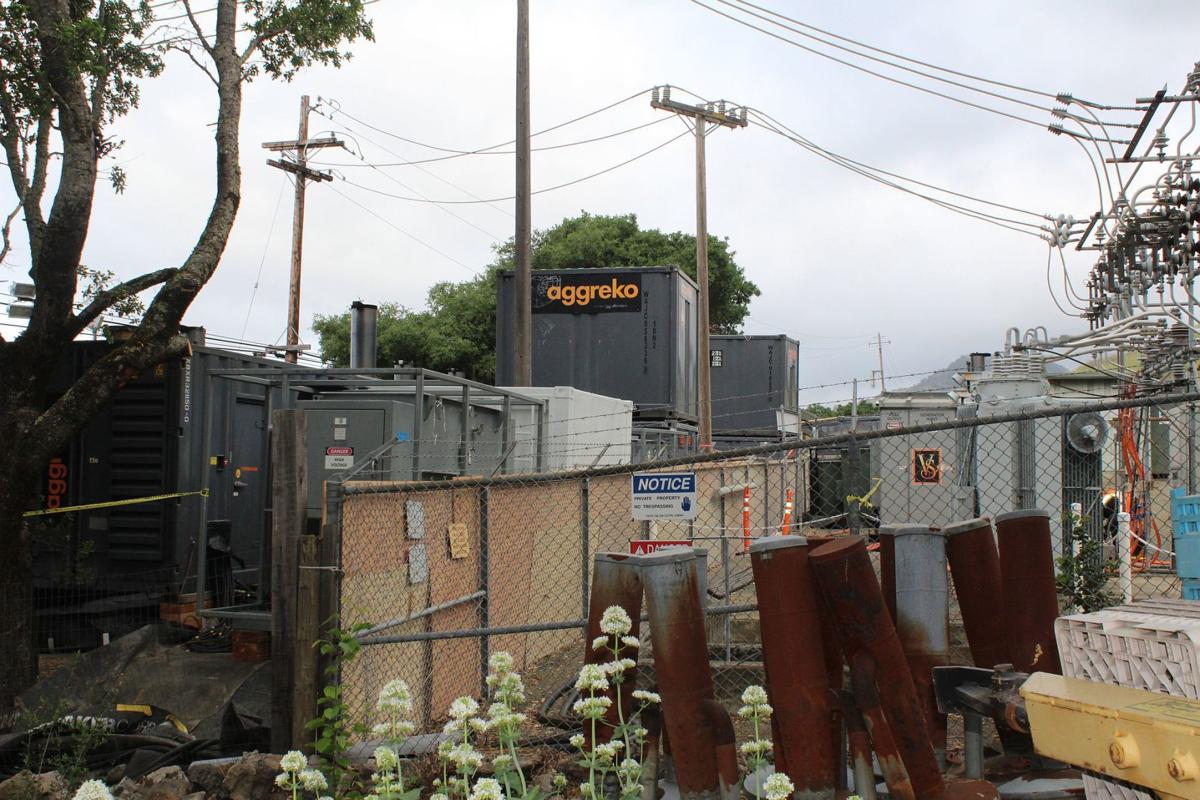 Large PG&E generators were installed at the Calistoga substation next to Laura and Mike Swanton's home/winery. The Swantons have filed a complaint with the county about noise and pollution levels.

Pacific Gas & Electric created both a roar and uproar in Calistoga Monday when it fired up 14 diesel-powered generators within earshot of a residential area.

The generators have been installed for backup power at the Calistoga substation while the utility replaces transmission lines in surrounding areas, but town officials complained that they hadn’t been notified in advance of the start-up.

The city issued a Nixle alert to the community at 11:30 p.m. on Monday after complaints flooded in about the racket and diesel smoke.

“The City has vigorously expressed its displeasure and concern about the lack of communication and coordination of this situation. We are urging PG&E to immediately work on noise mitigation and to address the diesel smells,” the Nixle message said.

Calistoga Mayor Chris Canning said he understood the importance of the work being done, but expressed frustration at the lack of communication from PG&E.

“We didn’t know when or how long the generators would be on, or how environmentally intrusive they would be,” he said. “They missed an opportunity give people the heads-up.”

After multiple calls to the utility by Canning, the generators were shut off at about 1:30 a.m. Tuesday morning.

PG&E spokesperson Deanna Contreras said on Tuesday she was getting a lot of calls about the Nixle alert.

“As PG&E continues to inspect and upgrade our system in high fire threat areas, as part of our Community Wildfire Safety Program, we occasionally have to take lines out of service and we are installing the generator to help mitigate any impacts,” she said.

“Although most of the work is happening in St. Helena, we need to take the line out of service that feeds Calistoga. The generator, along with other lines, will be the back-up power source.”

Contreras also apologized for the inconvenience, and said PG&E is working to remedy communication with its customers and the city.

“We will do a better job of letting people know exactly when we’ll be running them,” she said Tuesday morning.

Generators were initially scheduled to be turned on again on Wednesday, Thursday and Friday of this week from 5:30 a.m. to approximately 9 p.m., and then on and off throughout the month of May. After pressure from Calistoga officials on Tuesday afternoon, the utility relented to the hours of 6 a.m to 10 p.m., Canning said. The generators will not run on weekends.

PG&E also told city officials on Tuesday afternoon that it would be sending a customer representative on Wednesday to knock on doors in the neighborhood around the substation. City officials said that wasn’t enough and pressured the utility to send someone on Tuesday evening, to let residents know of the impending schedule.

Canning also said that the city is tired of apologies from the company, and instead asked that the generators remain at the substation until the whole safety project is completed, and into the fall.

Laura and Mike Swanton own a home and winery next to the substation, which is just off Lincoln Avenue and Silverado Trail. Swanton said he measured the noise from the generators to be between 90–112 decibels all day on Monday.

The Napa County General Plan says for industry, anything greater than 85 decibels is completely incompatible.

Contreras said the company is looking at sound-dampening solutions such as curtains and other materials, but those solutions won’t be ready by tomorrow.

“We will be measuring for sound. Our preliminary measurements were for 75 decibels, but we’re going to go back out there and check tomorrow,” she said.

The Swantons, who had potential customers leave due to the noise and smell, have filed a formal complaint with the county.

PG&E began installing the generators about three weeks ago, and started a few of them up on Thursday. At about 9:30 Monday morning they were all running, Swanton said, and “smoke was pouring out of the stacks. They have an industrial solution that was put in a residential, agricultural area. What kind of permit did they get to do this?”

These generators are located on the same site where PG&E temporarily installed backup power last November in case electricity to Calistoga had to be shut down as a wildfire safety measure.

PG&E to Calistoga: We're still learning on how to manage your safety

CALISTOGA — Pacific Gas & Electric is still in the process of learning how to implement its Planned Safety Power Shutoff program, a compan…

PG&E working to provide electricity to Angwin during wildfire shutoffs

PG&E and Pacific Union College are collaborating on a project in Angwin to support wildfire prevention.

The generators at PG&E’s Calistoga substation will be in use again starting Sunday, May 19.

Calistoga partners with PG&E for backup power during shutoffs

Come the high fire threat season this fall, most of Calistoga will not be left in the dark and without power as it has been in the past.

Large PG&E generators were installed at the Calistoga substation next to Laura and Mike Swanton's home/winery. The Swantons have filed a complaint with the county about noise and pollution levels.