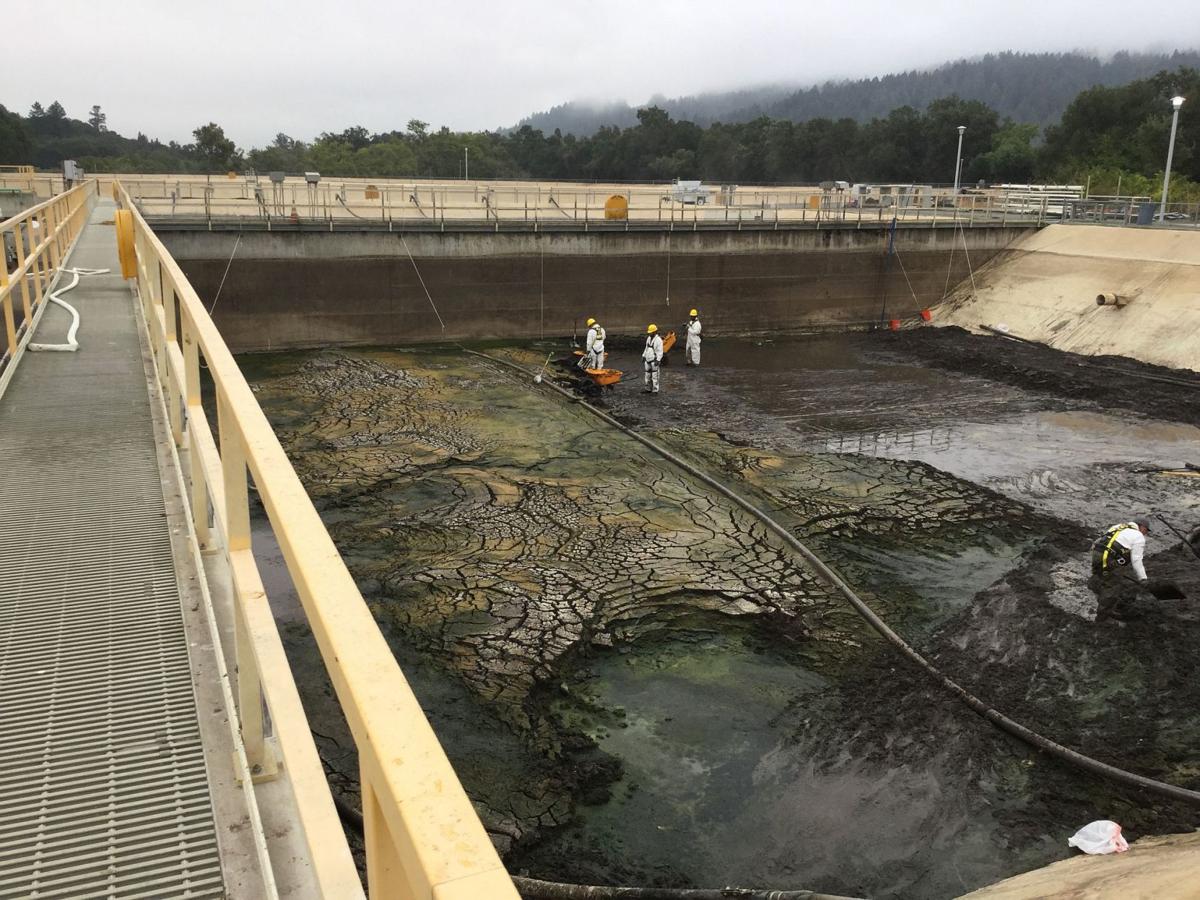 With proper funding in place, the city began removing settled waste product. Settled waste – which should normally be 11 inches deep – was found to be over 48 inches deep. 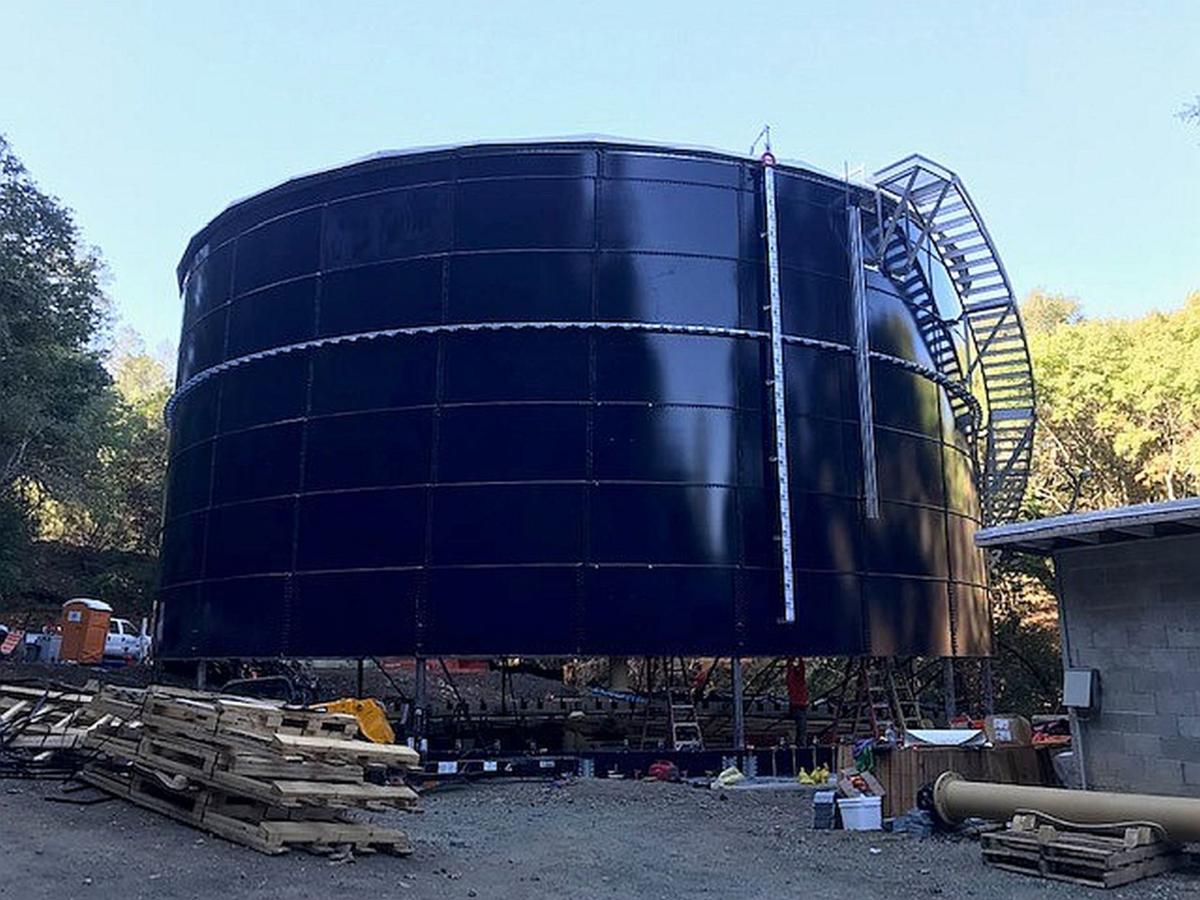 Have you have ever complained about the quality of water in Calistoga? Well you are certainly not alone. In fact, in recent months, several residents have reached out to the City of Calistoga and questioned the quality of water coming to the tap. Each time the city receives a call or complaint, we promptly investigate to determine a cause. There can be many causes for a water complaint – no flow, discoloration, turbidity, low chlorine residual or simply “tastes funny.” Each complaint has its own, unique cause. But I’d like to share a few things the city is doing to address issues related to water quality.

The Feige Canyon Water Storage Tank is a one-million gallon storage tank originally constructed in 1966. It is structurally and seismically deficient and its replacement has been identified as critical for public health and safety. Consider this … during the Tubbs Fire and the recent PG&E Public Safety Power Shutdown, all systems which move water into Calistoga are shut down, meaning the city must rely on water storage until power can be restored.

The city’s Public Works Department successfully secured a Hazard Mitigation Grant (HMGP) from FEMA for the replacement of Feige Water Tank. The grant will fund 75 percent of the $2,125,000 project cost with the city responsible for 25 percent. This infrastructure necessarily needs to be replaced and if not for the grant, the city’s ratepayers would be responsible for 100 percent of the cost.

The grant for phase one of the project cam in January 2016, and the phase two award (construction) was received in July 2017.

The design of the new tank is quite impressive. It will withstand an earthquake. It has bracing for high winds. The walls are constructed with glass-infused steel which do not require repainting for 40 or more years. There are over 33,000 bolts – not including the floor or the roof. The tank’s design improves efficiency and circulation of water/chemical mixture which reduces staleness of stored water. The list goes on and on but the project is nearing completion. Residents along Foothill Boulevard, especially those north of Petrified Forest Road, may have noticed their water pressure is slightly less than normal, or that the water may taste slightly different. That happens when the City demolishes and replaces a one-million gallon storage tank which is interconnected to the entire public water system.

General Cleaning Can Have a Huge Impact

Across town on Dunaweal Lane, public works staff are also finally able to undertake major maintenance efforts. At the wastewater plant, systems are used to remove solids/waste from wastewater, treat the water and discharge clean water back into the environment. Here is a crazy story for you …

The sewer plant has two, large aeration basins which allow water, oxygen and chemical “bugs,” to mix together whereby the bugs join to waste products and separate from the water. This process requires an extreme amount of electricity (24/7) to mix millions of gallons of wastewater. Three large blowers are used to power the process and the city spends in excess of $300,000 per year to do this. It is the costliest operation of the wastewater enterprise.

With new wastewater rates that took effect earlier this year, the city can sufficiently fund its operations budget which includes maintenance items like cleaning these aeration basins. With proper funding in place, the city began removing settled waste product. Settled waste – which should normally be 11 inches deep – was found to be over 48 inches deep. This waste was removed, one shovel at a time, and weighed over 476.86 tons – for only one of the two basins. By the time the project is completed, over 800 tons of solid waste will be removed from basins, allowing air, chemicals and water to mix more freely.

Thus far, staff has already reduced the number of blowers used from 3 to 2 and anticipates a 33 percent drop in electricity usage also…estimated annual savings potential of nearly $100,000. In addition, removing this organic matter from the wastewater process will likely result in reduced wastewater discharge violations in years to come … another public issue Calistogans are keenly aware of.

Each year, the Calistoga City Council adopts goals and objectives to guide the city. You may hear the city discuss financial sustainability and housing as top goals, but did you know that “Establish, improve and maintain city infrastructure” is on the same plane?

The city continues to have an ambitious plan to replace old, deteriorated infrastructure. The city requires new development to contribute incredibly large sums of money to pay for such infrastructure. There will be more projects to come, water mains to be ripped out and replaced, and sewer lift stations to be erected … all of which improve the quality of life Calistogans have grown to love and enjoy.

Please pardon our dust and thank you, THANK YOU for your support and help!

Construction was just completed on the “tie-in” from new Feige water tank to the distribution system in the City of Calistoga, and workers are…

See all that water flowing into the ocean? Bill by Sen. Hertzberg aims to save it

In stormy winters like this, residents of drought-prone Southern California fret about how much rainfall flows into the ocean, a reminder of t…

Due to this year’s above average precipitation, the City of Calistoga will be conducting its water main flushing program beginning Monday, Apr…

City of Calistoga moves ahead with wastewater storage improvements

The City of Calistoga is moving ahead with wastewater storage improvements on Dunaweal Lane.

Calistoga has a sufficient water supply to accomodate current and potential demand through 2035,

With proper funding in place, the city began removing settled waste product. Settled waste – which should normally be 11 inches deep – was found to be over 48 inches deep.