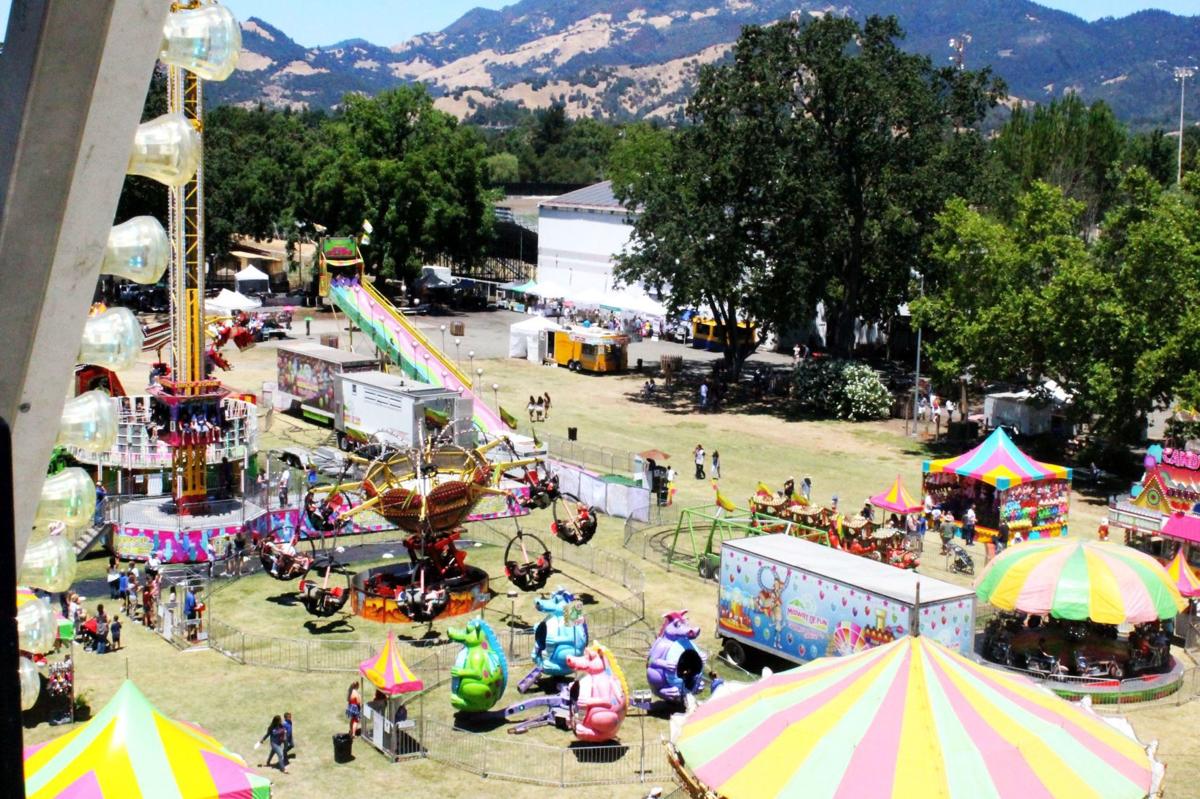 The bird’s-eye view of the Napa County Fairgrounds from atop the iconic Ferris wheel on July 4, 2016. 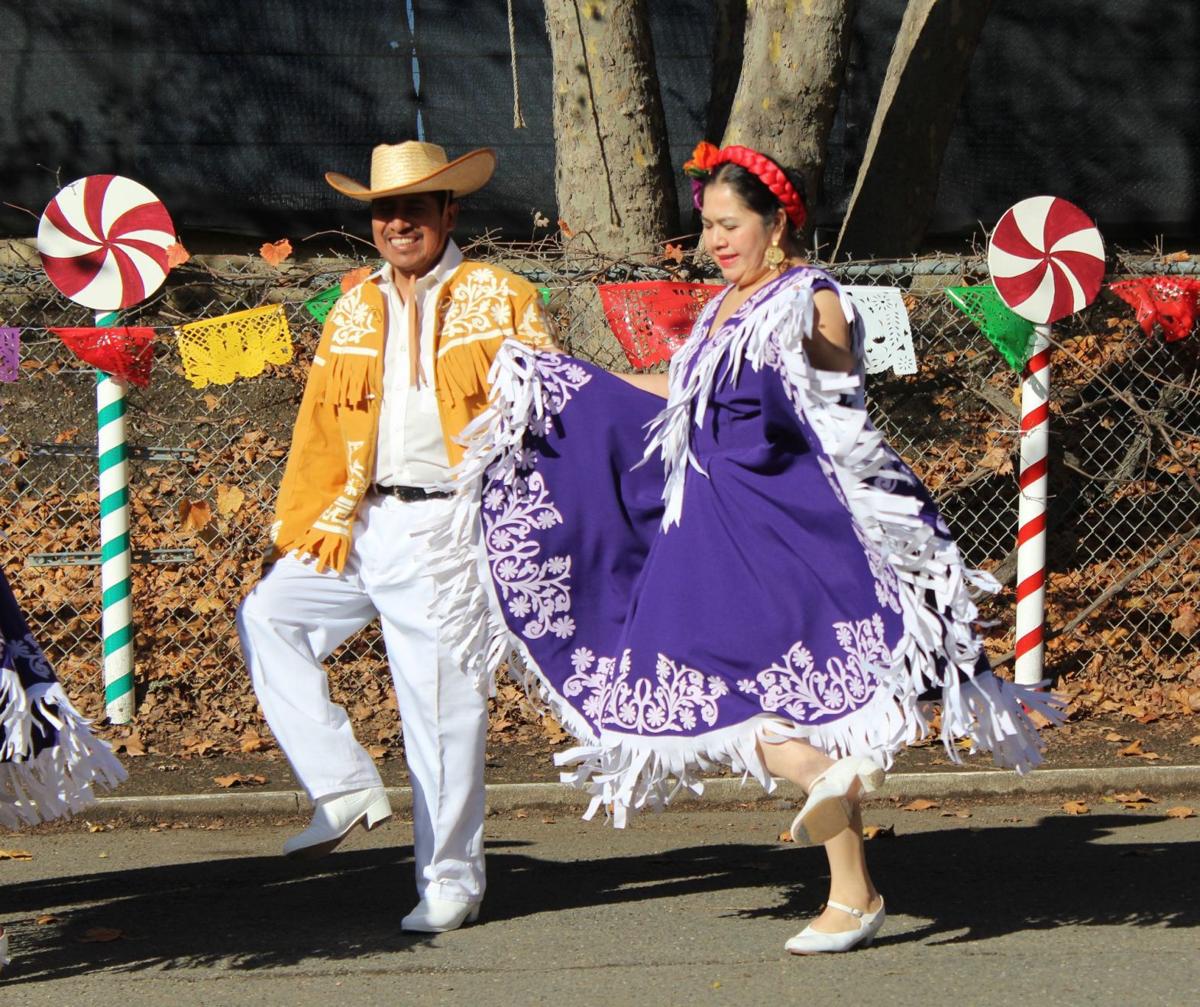 Ballet Folklorico was performed with colorful costumes at the Christmas Faire Dec. 1, 2018. 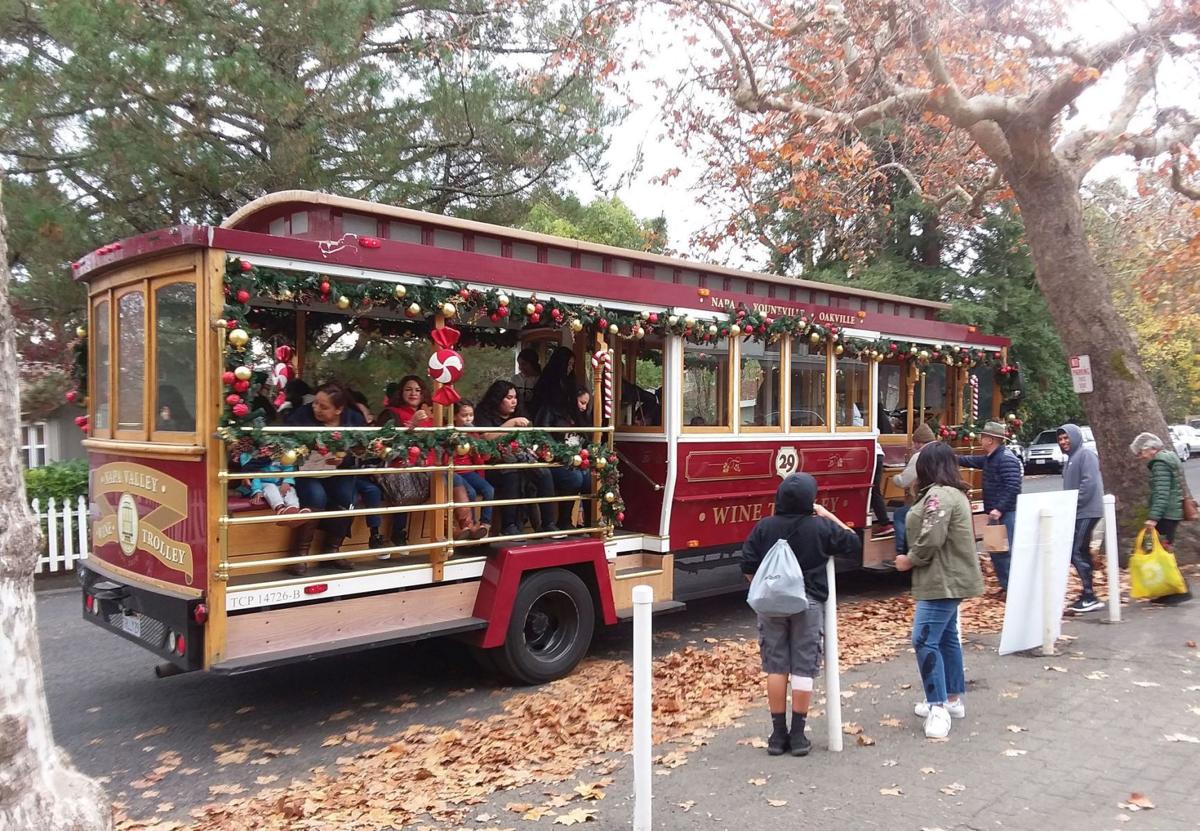 Shoppers ride the free holiday trolley from The Christmas Faire to downtown Calistoga.

The events begin with Engage Art Fair in April, followed by the Napa Valley Olive Oil Competition, and the County Fair & Fiesta, both in May.

The 4th of July Parade & Star Spangled Social, which will also include a one-day carnival, will continue, as will the annual Christmas Faire, taking place in December.

This year, there will be a change-up in the fair portion of the July 4th celebration, which has been moved ahead to May to coincide with the County Fair & Fiesta.

It is an effort to get more entries from students while they are still in school, said Karan Schlegel, board president of the Napa County Fair Association, responsible for putting on the events.

Schlegel is the sole remaining member of the board, which disbanded in December. She volunteered to stay on per the board’s agreement with the county, although she said eventually she would step down once the new board is up and running.

“Right now I’m the one that has all the history information so that we can transition,” she said. “We’re excited, and once we get the board in place our focus will be on fundraising to be able to sustain those events and even enhance them if we can.”

In November, it was announced the City of Calistoga had reached a tentative agreement with the county to buy most of the fairgrounds, except for the golf course. Those negotiations are still on-going, however.

“We have a contract with the county to hold the events like we did before, including use of the buildings. Even if there were a sale to the city they would still honor that contract through the end of the year,” Schlegel said.

While the above-mentioned events are moving forward, the new racing season at Calistoga Speedway at the fairgrounds is in limbo, awaiting the sale to go through. The Speedway is not managed by the fair association. Calistoga Speedway Hall of Fame Induction and Dinner is tentatively scheduled for Aug. 30, the 12th annual Louie Vermeil Classic and Sprint Car races are slated for Aug. 31 and Sept. 1, and the Wine Country Showdown World of Outlaws is projected for Sept. 14, according to HMC which puts on the races.

Meanwhile, two new fair association board members have joined the organization, including Rose Beck and Page Monte, both from Calistoga. The board is continuing to recruit new members, as the bylaws allow for up to 11, and Schlegel said she hopes to have eight or nine by the end of April. Board members don’t all need to be from Calistoga.

“We want diversity,” Schlegel said. “There are (also) people who live in Yountville, Napa, who are very involved in our community.”

“We thought it would be a fresh start,” Schlegel said, stressing the fair will be keeping a lot of the old traditions.

“We felt that was a good vision statement for us to use. We wanted to stress the celebration of Napa Valley and the events that we have. It’s not that we don’t want to keep the tradition of the fair association, but we thought with that being in the forefront, any derogatory comments would not follow us. By restructuring our legal entity and redefining the roles of the board, I’m confident that we can elevate our programming to better enrich, cultivate and connect with our community,” Schlegel said.

The county is allowing Celebrate to operate out of the house on the Mount St. Helena golf course property, on Grant Street, formerly occupied by Napa County Fairgrounds CEO Carlene Moore.

“We’re excited about the events and hope people will come, and will continue to volunteer where we need volunteers,” Schlegel said.

CALISTOGA — The city of Calistoga has reached a tentative agreement with the county to buy a portion of the Napa County Fairgrounds.

As of Jan. 1, operations at Napa County Fairgrounds will be ‘sort of’ business as usual.

I have to express my extreme displeasure that negotiations are holding up scheduling of events, including sprint car races at the Napa County …

Get ready for 3-days of boot stomping fun during Fair & Fiesta at The Napa County Fairgrounds in Calistoga, May 3-5. Enjoy unlimited carni…

Fun for all at Calistoga's Fair & Fiesta

A sloth, a snake, and a lemur were just a few of the surprises at this year's Fair & Fiesta, as the Napa County Fairgrounds became home to…

After more than two years of negotiations, the City of Calistoga and Napa County have come to a tentative agreement for the sale of a portion …

The Grinch really is stealing Christmas this year.

Expect the Napa County Fairgrounds to be revitalized if Calistoga completes its purchase.

The bird’s-eye view of the Napa County Fairgrounds from atop the iconic Ferris wheel on July 4, 2016.

Ballet Folklorico was performed with colorful costumes at the Christmas Faire Dec. 1, 2018.

Shoppers ride the free holiday trolley from The Christmas Faire to downtown Calistoga.