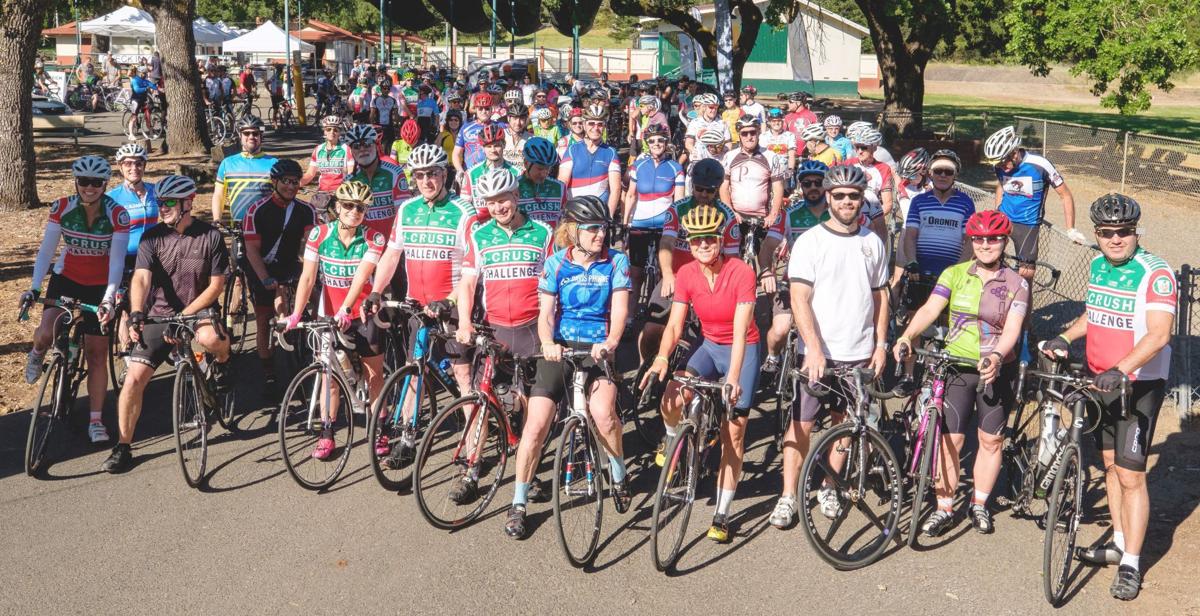 Cyclists line up for the May 2018 annual Crush Challenge, a fundraising ride sponsored by Rutherford's ZD Wines and its owners the deLeuze family. At the front of the line are Congressman Mike Thompson, fourth from left, and Brett deLeuze, president of ZD Wines, next to him. 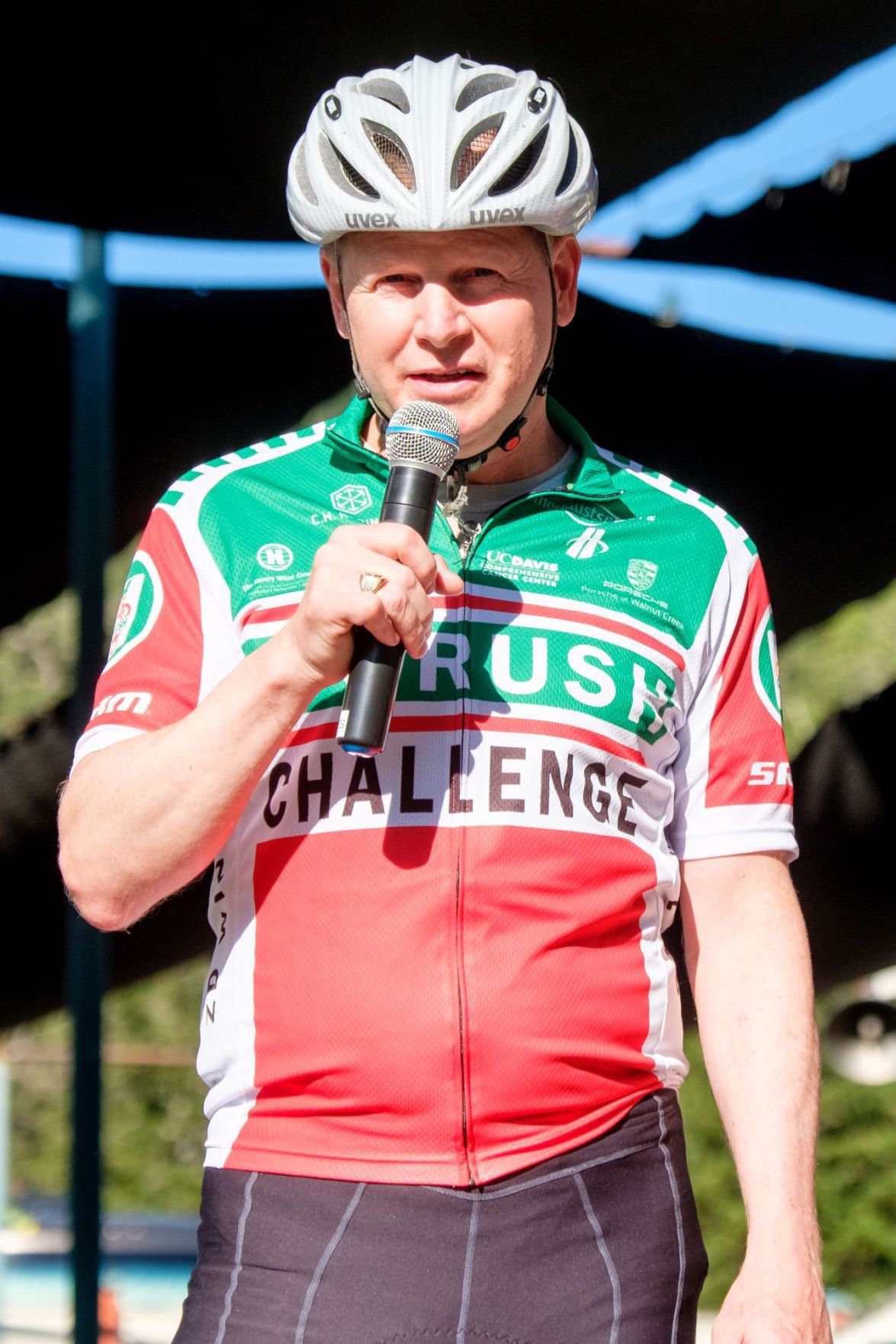 Brett deLeuze, president of ZD Wines, welcomes the attendees to the Crush Challenge on May 12, 2018.

The fifth annual Crush Challenge, to be held Saturday, Oct. 12, is more than a bike ride through the Napa Valley. It is an opportunity for participants to help find a cure for cancer by funding its research.

The event, hosted by Rutherford’s ZD Wines and its founding family, the deLeuze family, is called “the ultimate food, wine and cycling event in the Napa Valley.” It includes a bike ride with three distances, barrel tasting at ZD Wines, the Yountville marketplace with 10 wineries and 10 restaurants, and a sold-out dinner with dishes from five chefs at St. Helena’s Acacia House.

Since its beginning in 2014, the deLeuze family has donated $225,000 in proceeds from the Crush Challenge. The ride supports three charities, the UC Davis Comprehensive Cancer Center, the event’s presenting sponsor; the Davis Phinney Foundation for Parkinson’s; and the Boys & Girls Club of Napa Valley.

ZD Wines’ Dustin Moilanen, who is in overall charge of planning the Crush Challenge, said this year, they have added a 50-mile route in addition to rides of 38 miles and 27 miles. All three start and end at the Yountville Community Park. The 50-mile ride starts at 8:30 a.m., the other two at 9 a.m.

Moilanen said he expects 225 riders to participate, which is about 100 more than last year, because of the participation of their new presenting partner, the UC Davis Comprehensive Cancer Center. Riders expected to turn out for the event include Connie Carpenter Phinney, representing the Davis Phinney Foundation For Parkinson’s; former pro cyclist Chris Horner, who covered the Tour de France on TV this year; and former pro cyclist and sprinter “Fast Freddie” Rodriguez, a four-time U.S. National Road Race champion. Moilanen said Carpenter Phinney is the most decorated American cyclist, adding, “There’s nobody on her level.”

For those who don’t ride bikes, ZD Wines will host a barrel tasting with small bites at its Rutherford facility from 10 a.m. to noon, with shuttle buses from Yountville.

“What is unique about our event that I haven’t seen a lot of places is that we offer an alternative activity for people that don’t cycle,” Moilanen said. “My wife is one of those people and she would drop me off at a ride someplace and said, ‘I guess I’ll go hang out at Starbucks for six hours while you ride.’ That’s not great.”

Instead, non-riders can see their friends ride off, get on a shuttle bus and head over to ZD Wines. “You can have some food, have some wine and since this is a rest stop as well, you will cross paths with the riders as they come through.

From noon to 3 p.m., the Marketplace will be held in Yountville featuring food and wine, live music by Bay Area’s Carte Blanche and a silent auction. “We do 10 wineries, 10 restaurants, which has always been our format, and it’s mostly a great afternoon at the park, eating and drinking,” Moilanen said. “There’s no reason not to do this. You don’t have to be a cyclist to enjoy a full day of tasting and eating,” and he added, “Ninety-five dollars is the deal of the century, when it costs $30 or $40 to go to just one winery.”

A group of 120 people will attend the sold-out dinner, which features dishes from chefs Chris Cosentino, Matt Gennuso, Chris Kollar, Nic Jones and Rogelio Garcia. “There will be five incredible food pairings with wines, a silent and live auction and entertainment by Las Vegas mentalist and illusionist David Magee.

“I’ve known David for a very long time and he is a mentalist, who does really incredible sorts of manipulation,” Moilanen said. “He will do things like pick a random person in the audience, ask them to stand up and think about the name of their favorite person from the second grade. Without the person saying anything, he will write the name on a notebook, turn it around and it is exactly right.”

Magee performs all around the country in large venues, Moilanen said, adding, “He’s a friend, so he does this for us, for the charities.”

ZD Wines may well be known for its Napa Valley wines, including Pinot Noirs, Chardonnays and Cabernet Sauvignons, and someday it may become known for funding research that discovered a cure for some cancers.

One of those riding will be Dr. Joseph Tuscano, who has worked at the UC Davis Comprehensive Cancer Center for the past 23 years. For the past dozen years, he has worked with ZD Wines and the deLeuze family to find a non-toxic cure for lymphoma.

ZD Wines’ founder Norman deLeuze’s doctor was Tuscano, who said he sees patients with blood cancers, including a lot of lymphoma. “I do research to develop new treatments for patients with lymphoma,” he said. Every year, Tuscano and the cancer center used to do a fundraiser in Sacramento and used to solicit donations from Napa Valley winery, including ZD Wines, who would always donate some wine. “They became familiar with some of the work we were doing here,” he added.

Subsequently, deLeuze came down with a “particularly bad form of lymphoma,” Tuscano said, so he sought opinions on treatments. All the doctors he consulted said he needed chemotherapy, otherwise the lymphoma would take his life, Tuscano said. “He came and got my opinion and I said chemotherapy is the best thing we have, but there are a lot of other things out there,” the doctor said.

DeLeuze was a smart man, an aeronautical engineer before he was a winemaker. “He was very intelligent and felt there was something better than chemotherapy,” Tuscano said. The founder of ZD Wines researched different options and looked for alternative therapies that weren’t toxic. He brought Tuscano articles and data on those therapies. One of those was fermented wheat germ from Hungary, which deLeuze was taking. “He came in and his lymphoma was shrinking.” Tuscano tested it in the lab and it seemed to kill lymphoma cells. “So we started doing research on it and research on alternative therapies and supplements,” but he added, “It is very difficult to find funding or money for it, because a lot of people don’t believe in it.”

The deLeuze family decided to support the research, held a winemakers’ dinner in Davis and other fundraisers and eventually raised $700,000 for an endowment, to fund the research forever. Tuscano said the university “kicked in a little bit to get it over a million dollars,” which turned the endowment into a professorship, to support a professor to do the research into finding a non-toxic cure for lymphoma. “That’s been going on six or seven years,” he said.

At last year’s Crush Challenge, held in May 2018, the winery and family presented Tuscano with a check for $50,000. The professor calls the family “very, very generous,” who make “amazing wine, too.”

“I feel so honored to be a part of that. I have a Catholic upbringing and so I have a lot of guilt. Whenever they do all this fundraising, I think, oh my gosh, I have to work even harder.”

Currently, Tuscano and others have created a more potent form of the wheat germ and have a patent on it. “We just got a big grant from the federal government to hopefully identify the active component,” which will stimulate the immune system, Tuscano said. The new drug will “hopefully help to fight some of these terrible cancers. A lot has come out of the research that they’ve supported.”

He added, “Norman went on this quest to find something better. He knew he had a deadly disease and he was taking an awful chance by trying all of these things, and not doing the standard treatment approach. I commend him, he was a smart man but also very brave and generous.”

Along with a renovated interior, Calistoga Bikeshop has shifted inventory to ride the wave of new electric assist bikes.

Cyclists line up for the May 2018 annual Crush Challenge, a fundraising ride sponsored by Rutherford's ZD Wines and its owners the deLeuze family. At the front of the line are Congressman Mike Thompson, fourth from left, and Brett deLeuze, president of ZD Wines, next to him.

Brett deLeuze, president of ZD Wines, welcomes the attendees to the Crush Challenge on May 12, 2018.