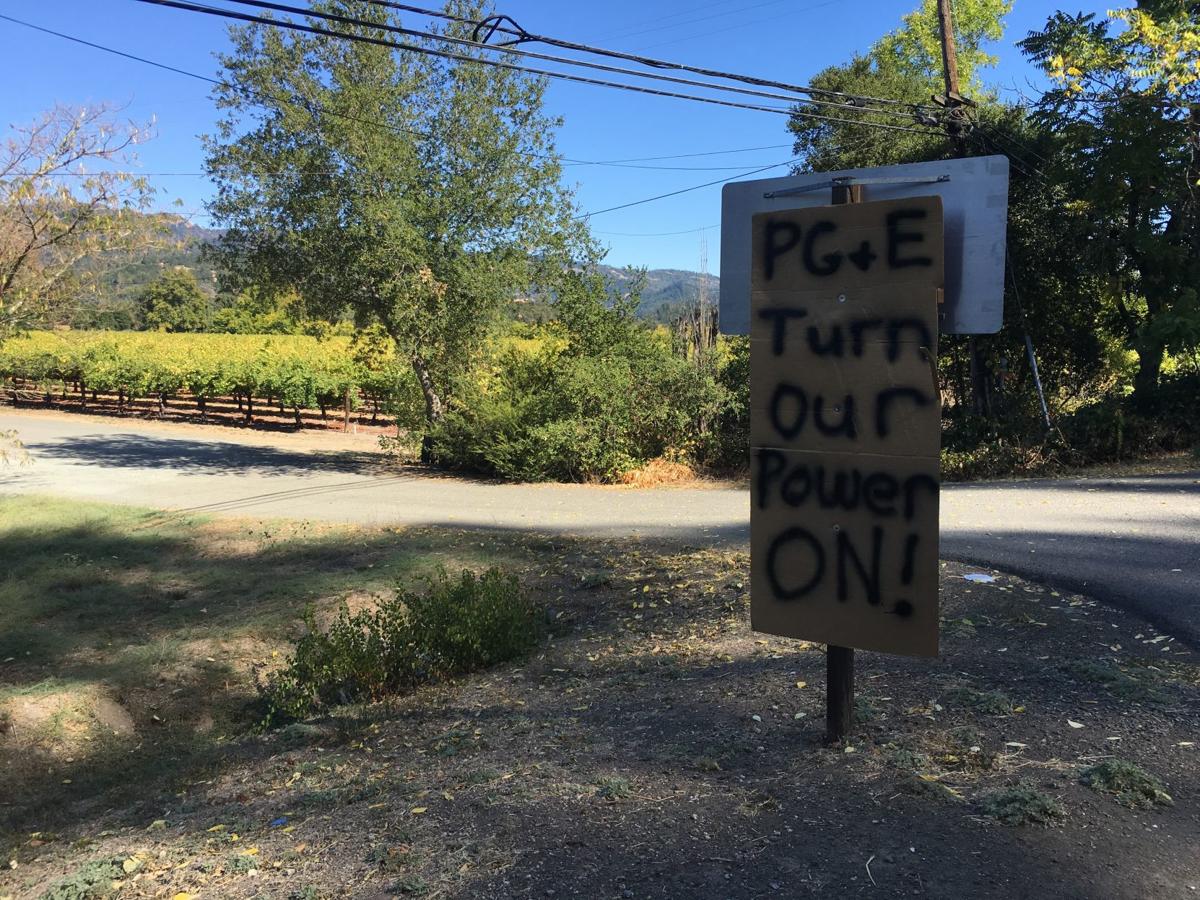 A sign on Highway 29 at the Calistoga city limits in October asking PG&E to "Turn Our Power On."

A sign on Highway 29 at the Calistoga city limits in October asking PG&E to "Turn Our Power On."

This column started as a play by play about what it was like reporting on the Kincade Fire, but somehow it devolved into a diatribe about PG&E. Go figure.

I’m not even going to try to recount PG&E’s PSPS schedule of outage events this past two weeks, let alone two months, and the sheer scope of people without power, because it makes my head hurt.

However, despite this massive PSPS program, the Kincade Fire started anyway, Wednesday night (Oct. 23) in Geyserville, and PG&E as much as admitted they started it.

Pause for a deep breath and a sip of water.

Jump ahead to Sunday when the fire had spread towards the Napa County line, getting so close to Calistoga an evacuation warning was issued and many people packed and left. The rest of us just packed and sat on pins and needles.

By Sunday night, already sleep deprived, I was getting Nixles from Sonoma County OES every hour, all night long.

Then, on top of the Sonoma County OES, Napa County OES, and City of Calistoga, and Cal Fire, PG&E started texting and calling me with pre-recorded messages. This is on top of getting emails, three at a time, from PG&E announcing who, in all of California, county by county, has power, and who, in all of California, county by county, does not have power. At one point, I kid you not, they actually told people to be prepared because there would be another PSPS before the current PSPS was even over. How does one experience two PSPS events at the same time is what I want to know. “Dear PG&E, is the first PSPS over? I can’t tell as I’m still without power.”

As comedian Lewis Black pointed out, and I paraphrase, “PG&E, the only @$!% light comes from the fires!”

Pause, deep breath, and another sip of water.

First thing Monday morning, after the all-night Nixle fest, I headed over to the Napa County Fairgrounds to see what was going on at the PG&E Calistoga Community Resource Center (a tent with folding tables) only to find the tent had blown away overnight in the 80-plus mph winds. The nice people who manned the center just kind of stood around and said the company had no back-up plan.

If there is a journalism class on how to do reporting during a natural disaster, I missed that day. Not that it could have prepared me for this.

Tuesday afternoon I had to jump off the reporting bus (think the movie “Speed” with Keanu Reeves) and put together the paper for a Wednesday morning deadline.

Late Tuesday evening, I was surprised with an email from our high school freelancer, Saida Morales. Unbeknownst to me, she had taken the initiative to quickly write and submit a story and photos about the community putting together a hot meal for the firefighters at the fairgrounds. The story, and the way she had written it, nearly had me in tears. It was written with tenderness verging on schmaltz and I hardly edited a thing and put it on the front page. It went viral on Facebook. Keep an eye on that one, she’s going far.

Back to the fire. The sky was clearing and so was the smoky air. And Calistoga still waited on the same pins and needles for the evacuation warning to lift.

Remembering to eat, I went downtown and spotted two guys from ABC10 in Sacramento, waiting to interview the mayor. “What’s interesting?” the reporter says to me as his camera guy tinkers with his camera.

I told him how despite everything we’ve been through people in town are trying to press on with daily life. I tell him that Rosa at the post office drives up from Napa to be here at 5 o’clock every morning, and when the power is out they sort the mail wearing headlamps. I tell him that over in Riverlea Square, a husband and wife team who own a couple of businesses, and have three children, have lost most of their income for October. Over at Duffy’s Rehab there’s a bunch of people probably wishing they had delayed their check-in date.

I start to walk away and something snapped, the way it does when you’re really tired and you don’t care what you say. “You know what’s really interesting?” I said. “It’s how reporters come up here from Sacramento, and Oakland, and San Francisco, and they don’t know where they are, don’t get the names of the streets right, and go back and report that all of Napa Valley has burned to the ground.”

I apologized, but I don’t really think he was listening anyway. But I probably should have taken my card back because it’s by now probably a sure thing I’ll never work in any of those towns in the near future.

Not that I would want to.

After watching the first responders do their thing, reading Saida’s story, and having the evacuation warning lifted just in time for the town to turn out for one of the best Halloween Parades ever....

On Monday morning, I checked my email and there were three from PG&E that proclaimed “100 percent” of customer power has been restored. ... except for “about 1,000 customers.”

There’s more, but I ran out of room a little while ago.

Some families affected by the new round of shutoffs were still in the dark from the last round.