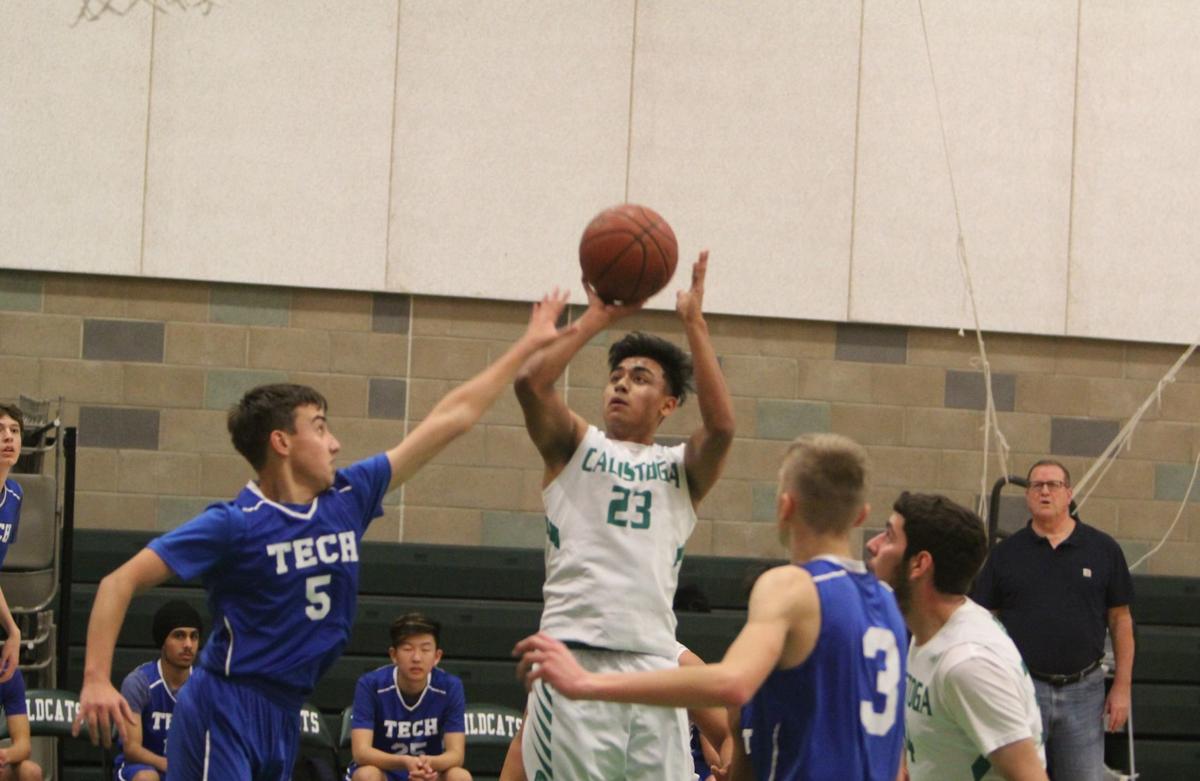 Calistoga's Isaac Garcia shoots a jumper over a Technology defender during the Wildcats 55-42 win over the Titans at Calistoga High on Tuesday. 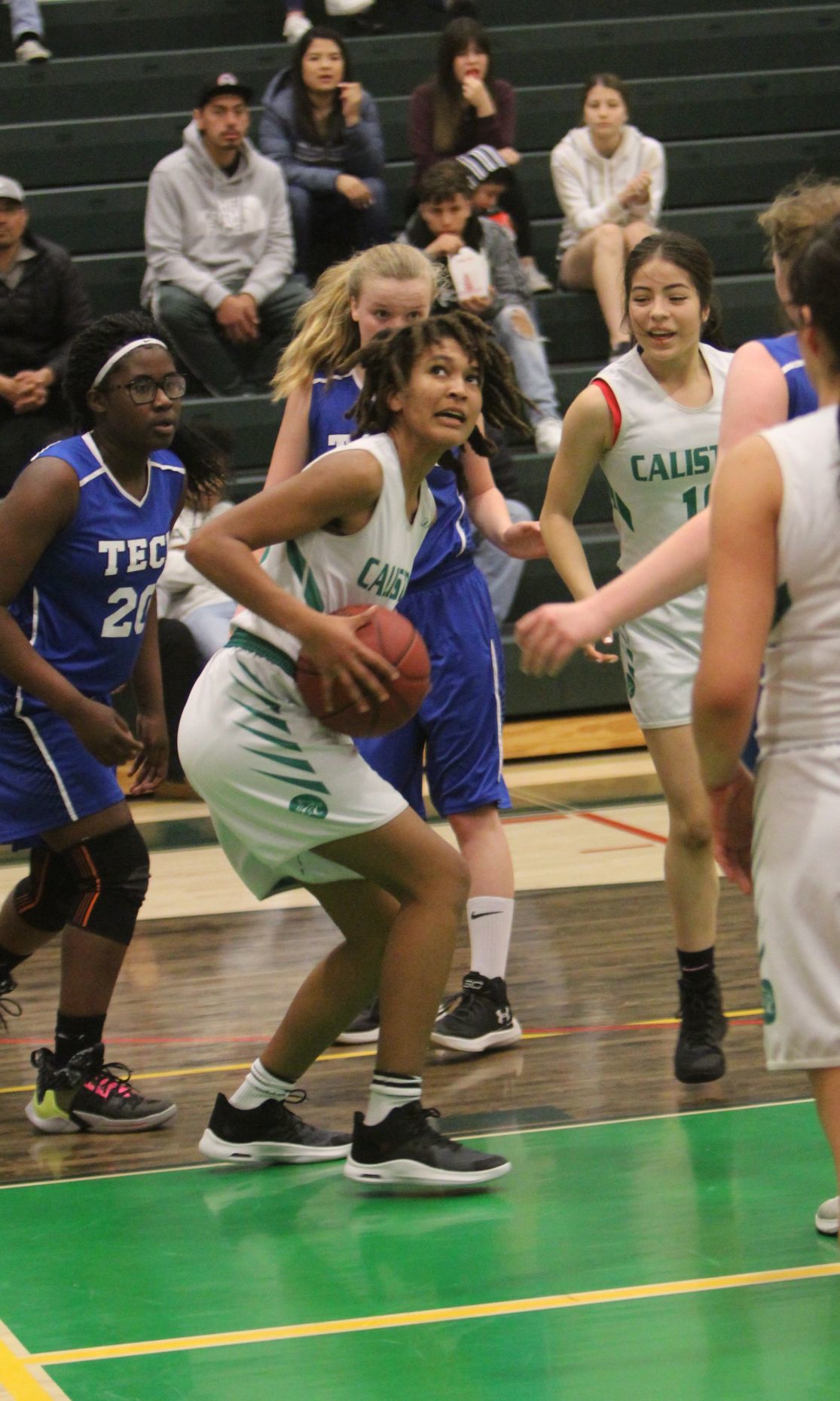 Calistoga's Tully Leonard look towards the hoop in the midst of Technogloy defenders during the Wildcats 51-27 win over the Titans at Calistoga High on Tuesday. 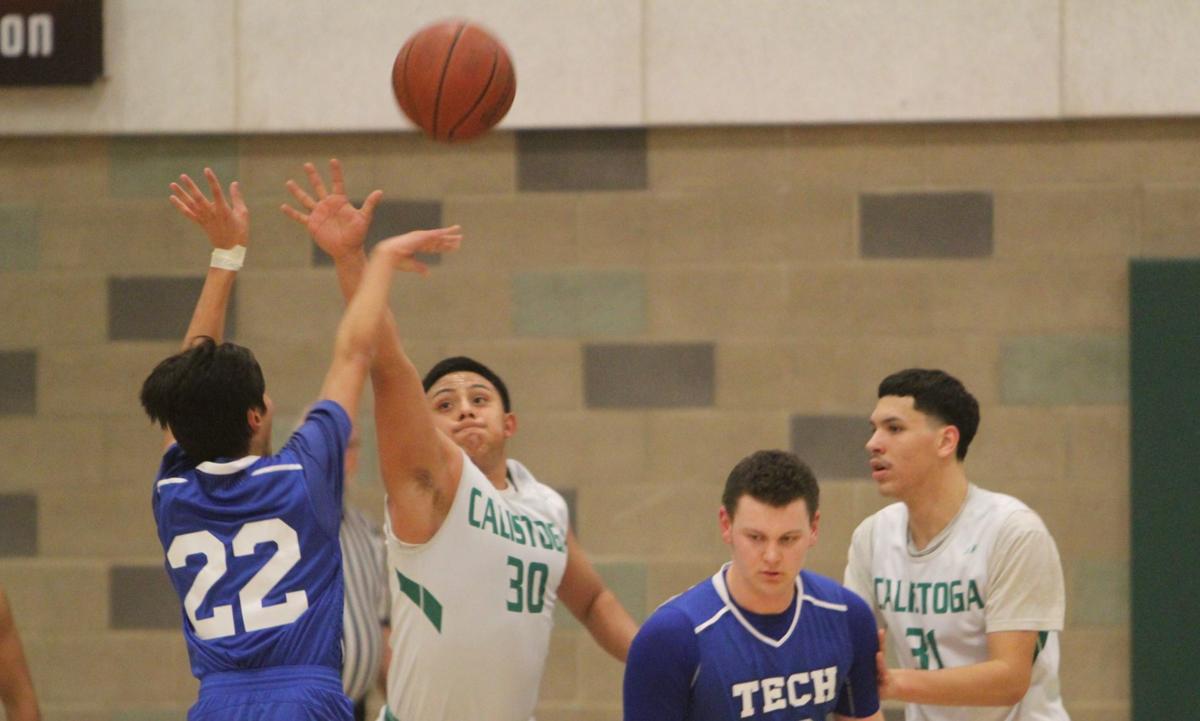 Calistoga's Jesus Rojas-Mendoza contests a Technology jumpshot during the Wildcats 55-42 win over the Titans at Calistoga High on Tuesday. 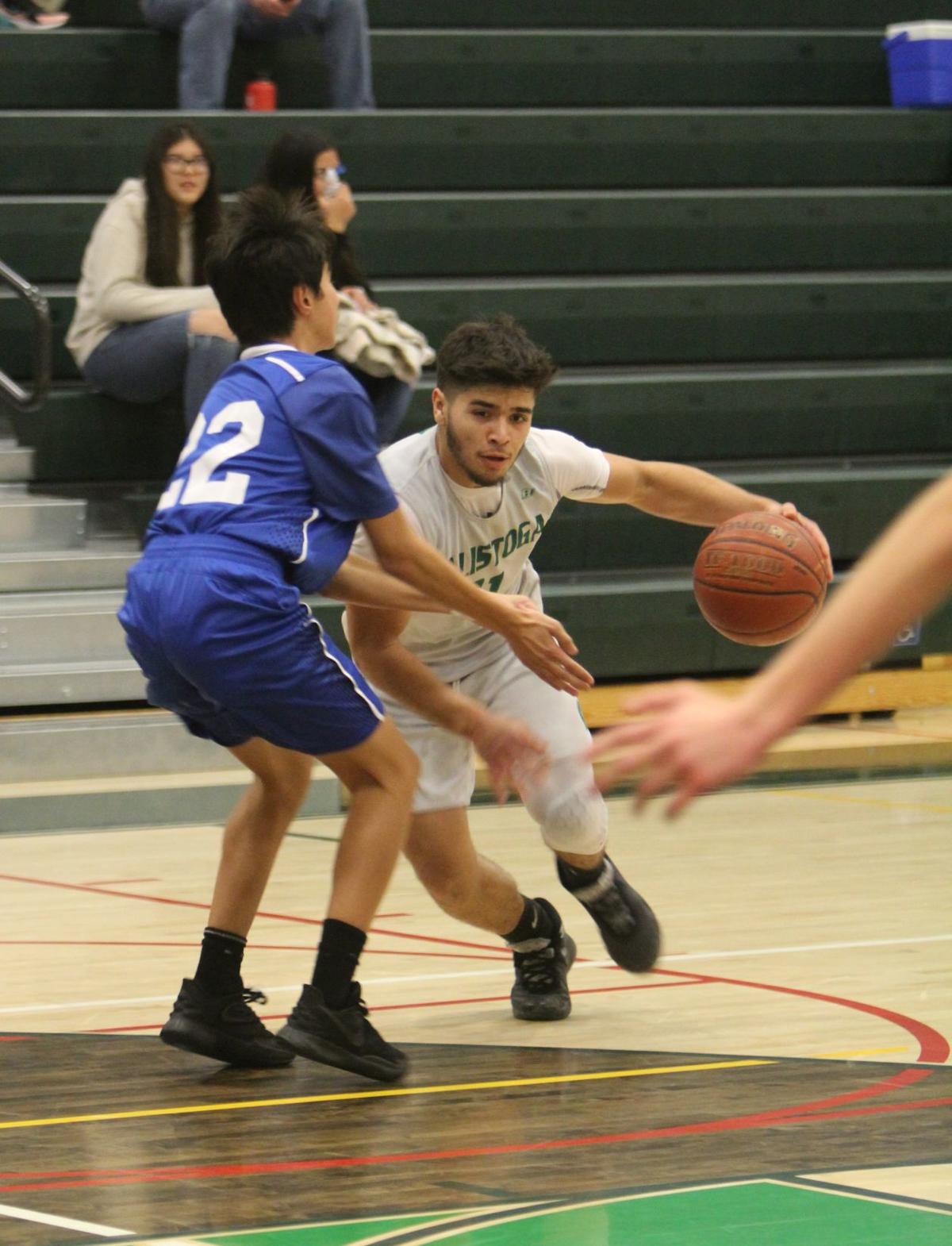 Calistoga's Christian Caldera tries to drive past a Technology defender during the Wildcats 55-42 win over the Titans at Calistoga High on Tuesday.

Calistoga's Isaac Garcia shoots a jumper over a Technology defender during the Wildcats 55-42 win over the Titans at Calistoga High on Tuesday.

Calistoga's Tully Leonard look towards the hoop in the midst of Technogloy defenders during the Wildcats 51-27 win over the Titans at Calistoga High on Tuesday.

Calistoga's Jesus Rojas-Mendoza contests a Technology jumpshot during the Wildcats 55-42 win over the Titans at Calistoga High on Tuesday.

Calistoga's Christian Caldera tries to drive past a Technology defender during the Wildcats 55-42 win over the Titans at Calistoga High on Tuesday.

It was a clean sweep for the Calistoga High boys and girls basketball teams in their North Central League IV openers against Technology on Tuesday.

The boys brought an end to their three-game losing streak with a 55-42 win over the Titans following a 51-27 rout by the girls that pushed their record to 12-2 overall.

But even with both teams atop the North Central League IV standings at 1-0 and showing clear signs of all-around improvement, coaches Ray Particelli and Cesar Cruz said their teams are far from finished products at this point in the season.

The girls are off to a historic start and are currently one of the top teams in Division 6 of the North Coast Section, but this new territory has actually come with some drawbacks. Particelli said following their blowout of the Titans (4-8, 0-1 NCL IV) that he feels the Wildcats have been “coasting” the last several weeks. He said they know how good they are and how good they can be, but said that complacency has come with that knowledge.

Tuesday’s game was a perfect example of that. The Wildcats got off to a slow start against Tech and took a 12-11 lead into the second quarter only because Vanesa Quiepo hit a layup in the final minute of the first.

Particelli gathered the girls on the bench between quarters and told them to just play their game. They took that advice to heart and rattled off a 14-2 second quarter to go into the half with a 26-13 lead.

But the third brought more of the same issues, as Calistoga again let its foot off the gas. Tech got as close as 32-25 with two minutes left on the clock and was within 36-25 entering the fourth.

Once again, though, the Wildcats flipped the switch and flashed their dangerous potential. They outscored Tech 13-2 in the fourth to comfortably pull away.

Quiepo scored 12 points to pace the Wildcats. Hayseel Barrera wasn’t far behind with 10, while Tully Leonard chipped in 8, Laila Elkeshen had 7 and Litzy Infante scored 6.

Postgame, Particelli explained that he’s seen a lack of urgency in practices the past few weeks that have led to the Wildcats’ first defeats of the season. Their 59-35 loss to Maria Carrillo in the Amber Division finale of the West Coast Jamboree at Benicia in late December was followed not long after by a 41-35 loss to Sonoma Academy. Particelli said it was a game they had in their grasp but let slip away down the stretch.

Both Particelli and Cruz do believe, though, that those losses helped serve as motivation for a team that needs it right now.

“Our intensity in practice has to step up,” Cruz said. “We’re feeling that comfort zone I can’t stand. I get it: we’re 12-2 and we’ve earned that lack of urgency. But we need to step it back up.”

Added Particelli, “Enjoying it and losing focus are two different things. They can enjoy and be proud of being 12-2 all they want. But when they show up to practice, it’s time to go to work so we can go 13-2.

“We’re like a beautiful knife that’s a little bit dull. We’ve lost that edge a little bit, but we’ll find it. I’ll sharpen them up.”

So with league play starting and winless Tech coming to town, they knew they needed to turn in a good performance.

From the opening tip, they were locked in. Fueled by a combined 18 points from Christian Caldera and Jesus Rojas-Mendoza, they built a 20-6 lead by the end of one quarter. Their offense slowed some in the second, but they still went into the half with a 26-15 lead.

The teams played the final two quarters nearly step for step. Calistoga (5-7, 1-0 NCL IV) would extend its lead, and then Tech (0-8, 0-1) would rattle off a few baskets in succession to keep the hosts from feeling comfortable. The Titans were as close as 44-37 with four minutes left in the game. But like the girls, the boys pulled away down stretch with an 11-5 run to close things out.

“Hey, whatever is behind us is behind us,” Particelli said. “We’re 1-0 in league and we played better than we’ve been playing. We got a ways to go but everything looked a little bit better.”

Caldera led the way with 16 points, 14 of which came in the first half. Christopher Olivares picked up the slack in the second when he scored all 14 of his points. Rojas-Mendoza finished with 11, most on three 3-pointers.

Particelli said the three-game skid they ended Tuesday was the mainly the result of two factors: better competition and a lack of cohesiveness.

“We’re just not all on the same page at the same time,” he said. “Everyone has a pretty good idea of what we need to do, but we fade in and out of that focus. ... It’s just hard to build up any continuity when you play that way.”

“We have a decent amount of talent, for sure, but we just need to get it all together more.”

Cruz added that what he saw from his team postgame was encouraging.

“The good thing for me is that, coming into the locker room, Christian (Caldera) was saying ‘I wasn’t happy with my performance. We only beat them by 13.’ So, that’s good. He thinks we can play better,” the coach said. “He’s not satisfied with the win. He looked up at the scoreboard and was like, ‘Don’t like it. We should’ve beat them by more.’

“So, in my mind, they think they can play better and that’s great.”

Both Wildcats teams were to play nonleague games at PUC Prep on Wednesday. Tomales comes to town Friday, when the varsity girls tip at 5 p.m. and the varsity boys game follows.