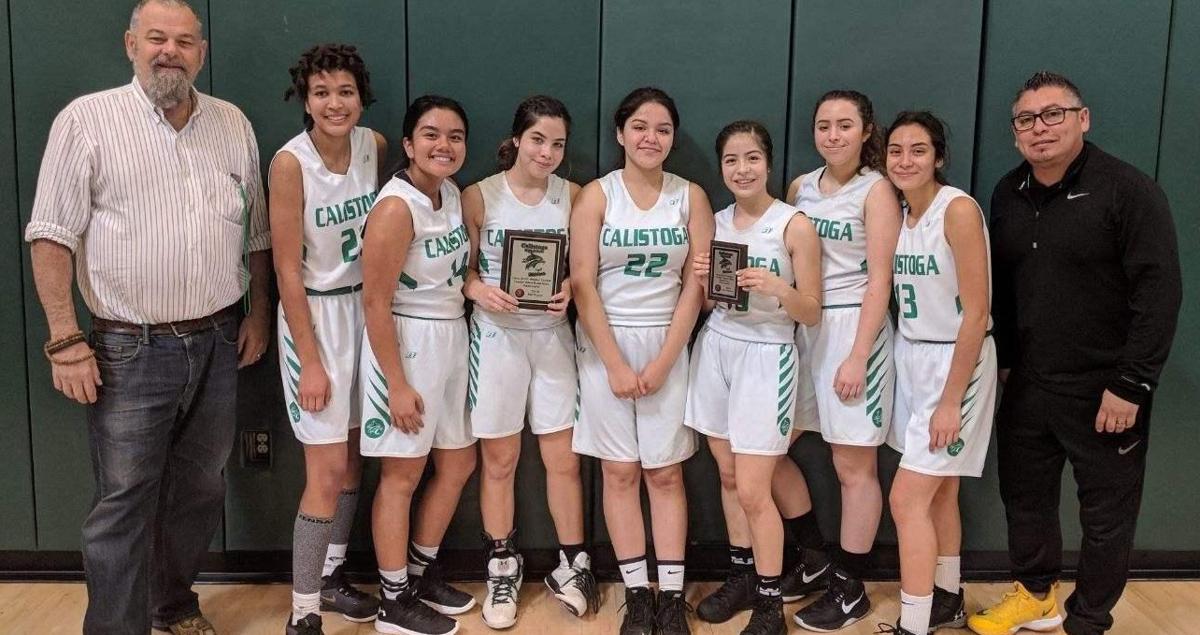 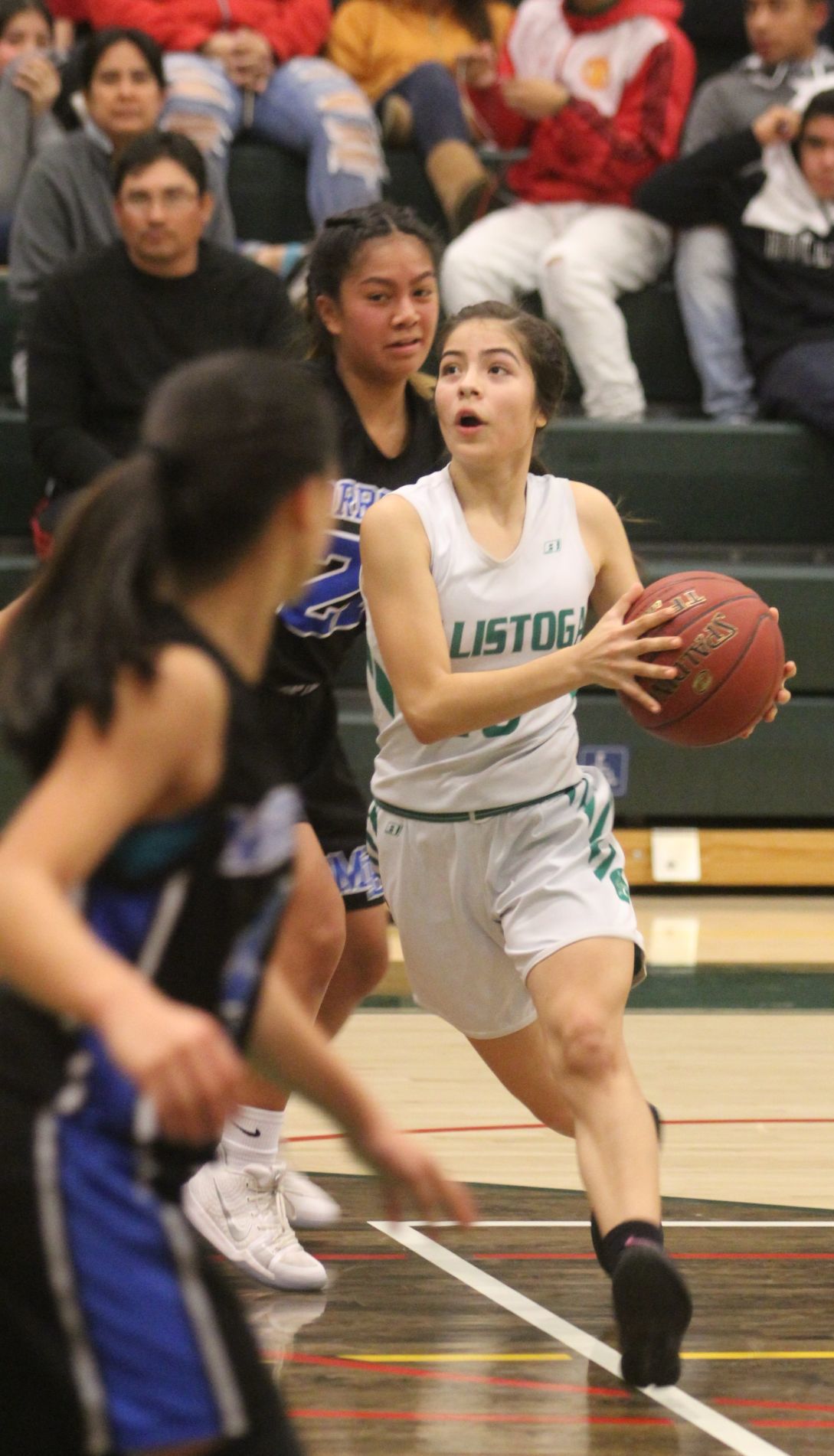 Lizbeth Escobedo drives to the hoop during Calistoga's girls basketball game against Morro Bay at the Gene Duffy Sr. Holiday Classic. At the Stokes Tournament in Kelseyville over the weekend, Escobedo was named to the All-Tournament team. 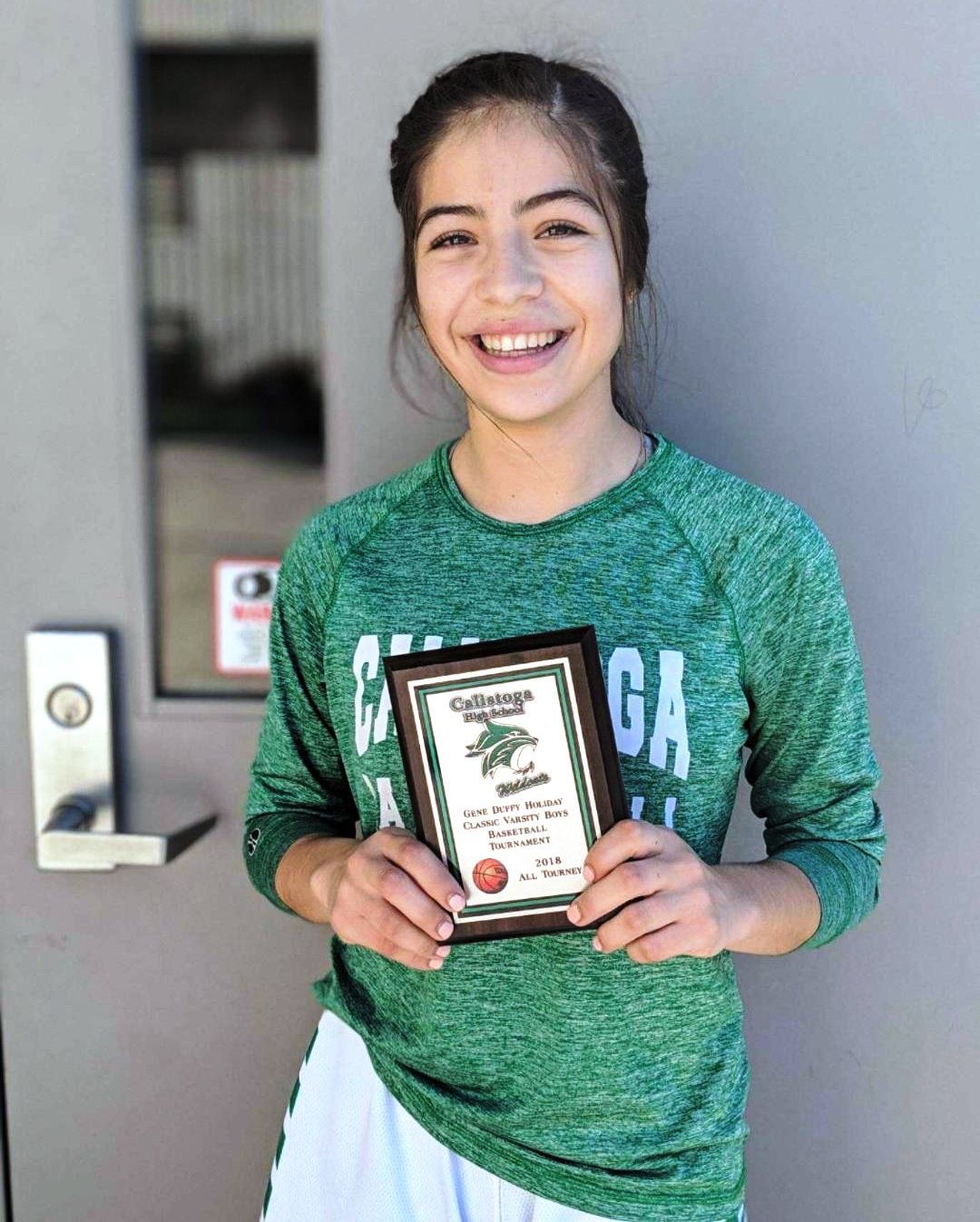 Lizbeth Escobedo drives to the hoop during Calistoga's girls basketball game against Morro Bay at the Gene Duffy Sr. Holiday Classic. At the Stokes Tournament in Kelseyville over the weekend, Escobedo was named to the All-Tournament team.

The Calistoga girls won three of their four games to secure third place in the Gene Duffy Sr. Holiday Classic over the weekend at Calistoga High School.

The 3-1 weekend improved their record to 3-3 on the season.

Here’s how the games went:

The first day of the Gene Duffy Sr. Holiday Classic went almost as well as it could have for the Calistoga girls basketball program on Wednesday. The Wildcats completed the day with two clinical victories over North Hills Christian-Vallejo, 65-18, and Elsie Allen-Santa Rosa, 60-20

The victories were the first two wins of the season for the young squad, as the Wildcats improved to 2-2 on the year. In game one, Calistoga opened with a 12-0 run, while North Hills Christian didn’t get on the board until through the opening quarter. The Eagles matched the Wildcats scoring for the remainder of the frame but the hosts entered the second with a 20-11 lead. The Eagles would only score seven points for the rest of the game.

Heading into the season it wasn’t clear who would take over the scoring hole left by graduated lead guard Gilda Rojas. After Wednesday, Lizbeth Escobedo may have grabbed that role with both hands. The junior guard finished the first game with a triple-double. Escobedo had as many points as North Hills Christian with 18, and she passed out 10 assists while adding 12 steals for the game.

“She does a lot for us and we run everything through her. She has the ball in her and she starts us. She has endless energy and she averaged about three points a game last year. We were on here all summer that she has to look and get her points,” Calistoga co-coach Ray Particelli said. “We had Gilda who averaged about 15 points and we certainly are going to miss her, but if everyone picks up a couple points we won’t miss her points.”

Calistoga picked up 34 steals as a team and the Eagles committed 41 turnovers for the contest. The Wildcats ballooned their lead to 33-14 at the halftime break.

“It feels pretty good to put up that stat line and it feels good to share it with my team, but I know I could have done better,” Escobedo said.

The smaller Calistoga squad outrebounded North Hills Christian by a margin of 41-27. Tully Leonard notched a bulk of the rebounds, as the sophomore center ended the game with nine points, 10 rebounds and five steals.

“We executed and we ran and we ran up and down the floor and we rebounded,” Particelli said. “We did a lot of stuff pretty well. So I am happy with their conditioning.”

Calistoga’s lead continued to grow in the third quarter, as the Wildcats had another 20-point frame. Hayseel Barrera did most of her damage in the first half, but the junior ended the game with 15 points and four rebounds. The Eagles continued to struggle from the field in the fourth quarter, with North Hills Christian only managing one point in the final quarter.

“I think we could have played better defense in the first half. In the beginning we were kind of lost and all over the place,” Escobedo said. “We knew we should have done better so by the second half we had talked to each other and knew what we had to do. Once we got up in the second half we were more communicative and we executed better.”

The second game of the day saw Calistoga jumped out to a 13-0 run to start the contest before breezing to a 60-20 victory over Elsie Allen. The Wildcats nearly held the Lobos scoreless in the first quarter. Elsie Allen scored with less than one minute remaining in the quarter to the escape the frame with two points.

Once again Escobedo filled up the stat sheet. The junior guard ended game two with 10 points, 18 rebounds, nine steals and eight assists, just two assists and one steal away from a quadruple-double.

The Lobos had their best shooting quarter in the second, when they scored nine points. The Wildcats ran away with it after the first and scored 18 points before halftime. A major key for Calistoga was rebounding, as the hosts had a rebounding advantage of 39-12 for the game.

Barrera led the way on the scoring front in game two, as the junior scored a game-high 15 points while pulling down two rebounds.

Calistoga only allowed the Lobos to score six total points in the second half, while forcing Elsie Allen into 26 turnovers.

“That was a Division 2 school and it looks good on the resume,” Particelli said. “It’s not about the score, it is about the execution. They weren’t very good, but we executed pretty well on both sides of the floor.”

Even though a six-point margin is slim, neither team had led by more than three points in a tightly contested second half, so the slight advantage felt huge at the time.

But that feeling was fleeting and Morro Bay tied the game at 32-32 three minutes later. From there, the two teams battled with new intensity for every basket. The Pirates eventually took a 36-32 lead with 22 seconds left before Calistoga’s Laila Elkeshen converted a layup with eight seconds left to bring the margin back within two.

Morro Bay called a timeout after it nearly turned the ball over on the ensuing inbounds. Out of the timeout, Calistoga fouled Morro Bay’s Phoebe Knighton intentionally to send her to the free throw line in a high pressure situation. The Calistoga home crowd was rowdy at this point, stomping the bleachers and shouting during Knighton’s free throw. She missed both, but then secured the loose-ball rebound, was fouled again, and then sunk both to give Morro Bay a 38-34 advantage that it would hang on to for the final seconds.

It was an unfamiliar situation for the Wildcats (2-3) and it showed to Particelli.

“I see a little bit of anxiety over that opportunity to grab the ribbon,” he said. “It’s right there in front of them but it gets a little bit more tense. The flow of the game, especially when the tempo is up, you don’t realize the score and you don’t play possession by possession but as the clock is running out you realize there’s two and a half minutes left, then we got two minutes, then you start to tighten up a little bit and that cost us.”

Smothering defense and a team-first mentality propelled the Calistoga past Roseland Collegiate Prep, 43-13, in the third-place game of the Gene Duffy Sr. Holiday Classic on Saturday afternoon.

The Wildcats held their four opponents for the tournament to an average of only 23 points per game.

“Our success this year and last year has always been defense-based. The offense is doing a solid job for us and everyone is chipping in,” Particelli said. “Our bread and butter will always be on the defensive end. Even last year, when we couldn’t score, our defense won us 19 games. I am so very happy with the defense today and for the tournament.”

A familiar theme for the Wildcats during the three-day tournament was early runs to start the game. Calistoga opened Saturday’s game on a 10-2 run and had extended its advantage to 12 points by the end of the quarter.

Escobedo led the Wildcats with a game-high 13 points. She also grabbed six rebounds, dished out seven assists and nabbed five steals. The guard was named to the All-Tournament team for her strong showing across all three days.

“It’s a great feeling (to finish third) and honestly we wanted to take it all the way,” she said. “We need to learn from our mistakes.”

The Wildcats tightened their stranglehold in the second frame, holding the visitors from Santa Rosa to one point while extending their lead to 23-6 at halftime.

Leonard was a key in the post in the second quarter, as Calistoga’s lone sophomore finished with a double-double of 10 points and 10 rebounds.

The Wildcats cruised in the final frame, with Roseland Collegiate Prep struggling to keep a hold of the ball. Elkeshen and Barrera each added four points for the Wildcats and were solid in the post. The duo combined for 12 rebounds.

“Honestly, we are like a family,” Escobedo said. “We support each other and keep each other up. If one of us is down we have to encourage them. We are all to blame if we lose or if we win. We have had to play bigger roles since our top scorer Gilda (Rojas) left last year, and we have learned that this tournament.”

The Wildcats also received a solid performance from Infante. The junior had nine points, seven of them in the second half. She singlehandedly outscored the Grizzlies after the break.

Calistoga was the taller team, for once, and the Wildcats took advantage on the boards. The hosts outrebounded the Grizzlies 33-24.

“We are star-less and for us to be successful, we have to be a good team,” Particelli said. “We are decent individual players, but the total of our parts makes us better. That’s how we have to play. We wouldn’t be successful if Lizbeth had everything she had and everyone else hoping she would carry us. The girls understand that.”

Lindsey Arellano was most of the offense for Roseland Collegiate Prep, the guard scoring nine points.

The Wildcats forced 22 turnovers for the game.

“There is a learning curve to winning. We just need to have a little more poise at the end of close games. All the success that they are seeing will hopefully lead to that,” added Particelli. “The reason we didn’t win on Friday was we got a little bit tired in the last two minutes. We were 10 possessions from beating a very, very good team.

“A solid tournament for us, for sure, and the game we lost, we went wire to wire with them. We are all juniors (except for sophomore Tully) and there are things you need to learn to become a solid program. We are still going through that process for sure.”

Calistoga will travel to Kelseyville next Thursday to take part in the Stokes Tournament.

Due to a team dropping out, the Gene Duffy boys and girls basketball tournaments have had to reshuffle brackets and reschedule several games. Read about the changes here. The tournament will still be held Thursday thru Saturday.