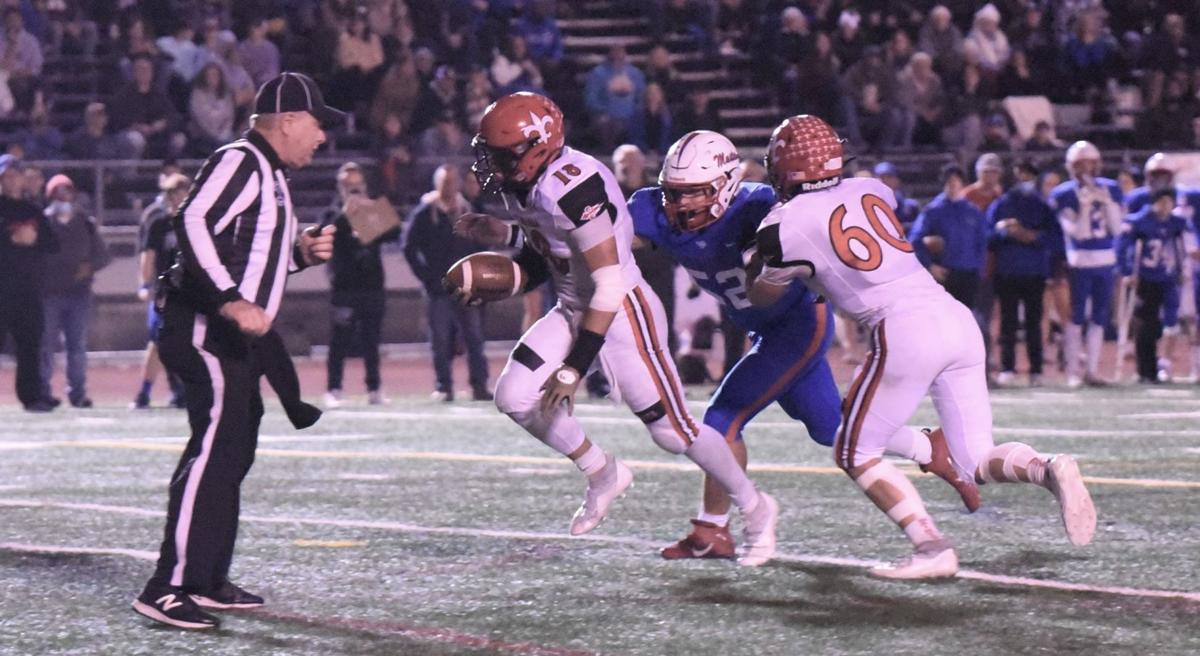 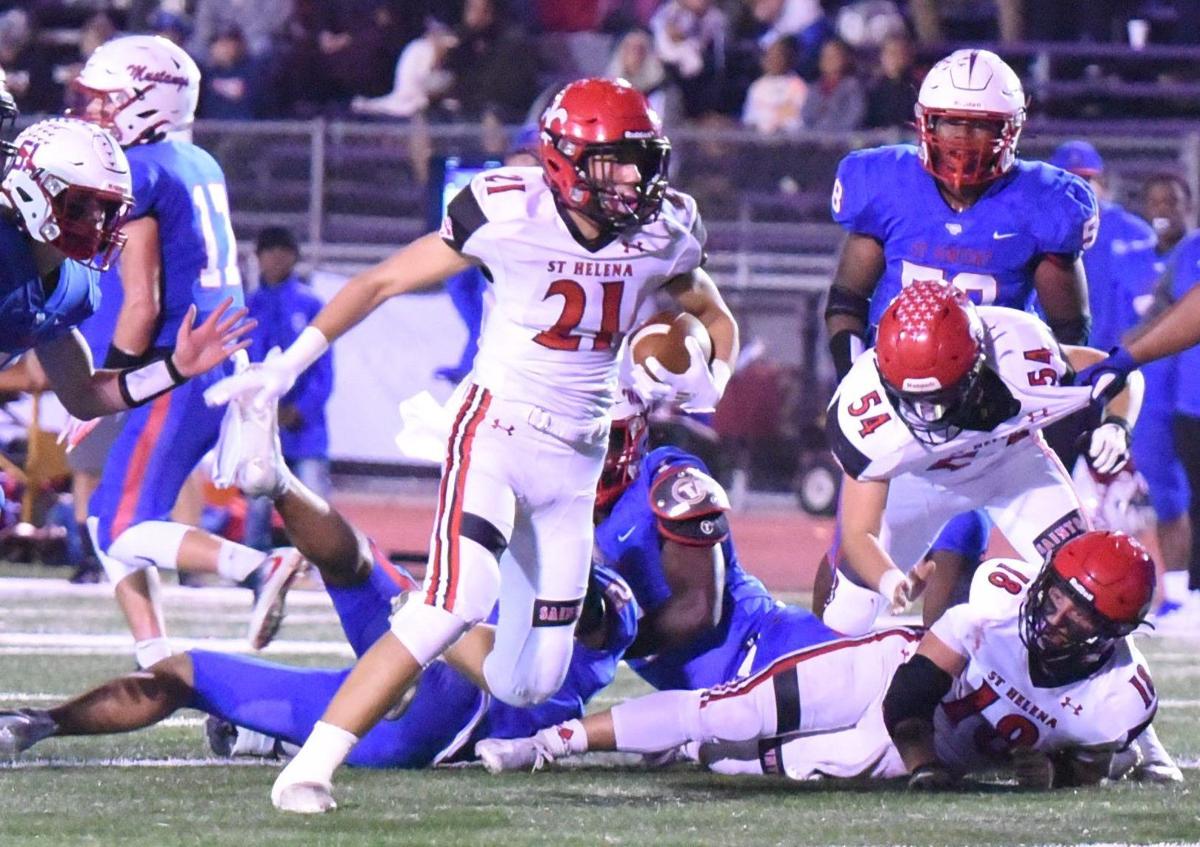 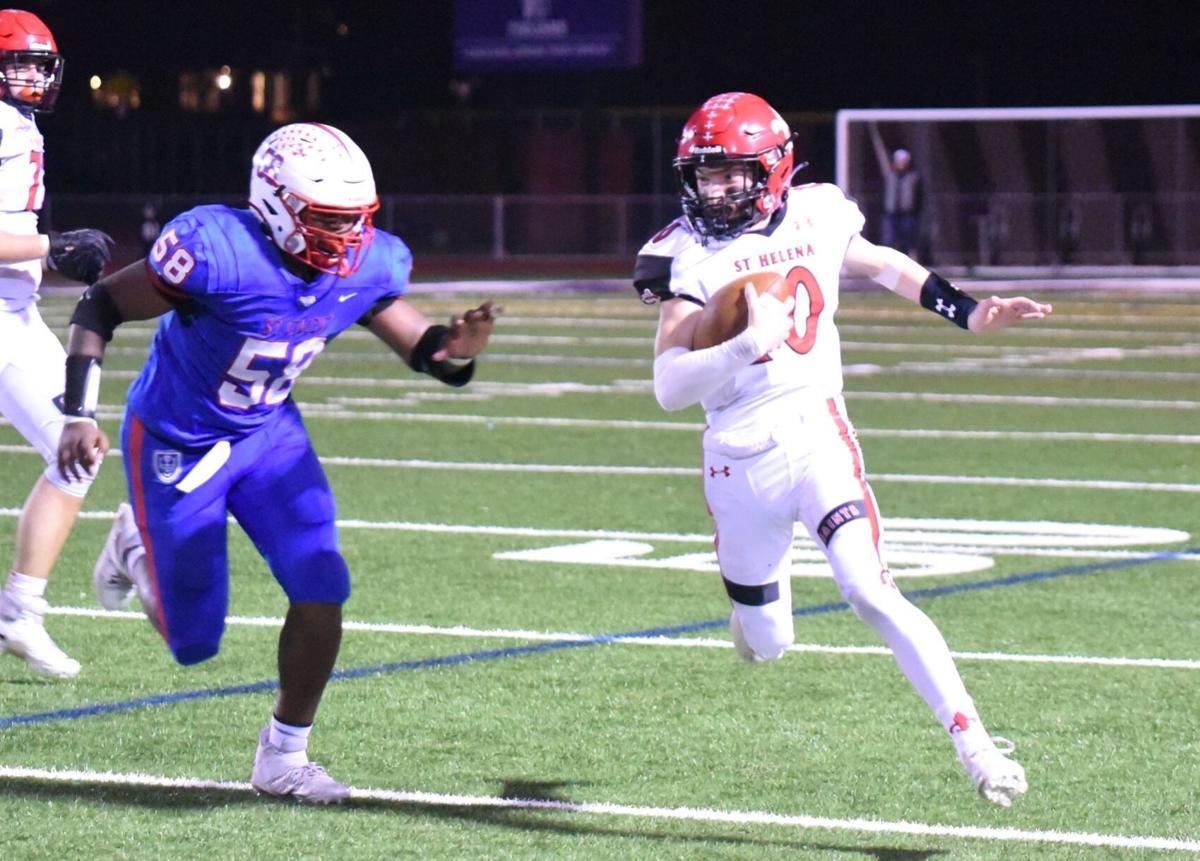 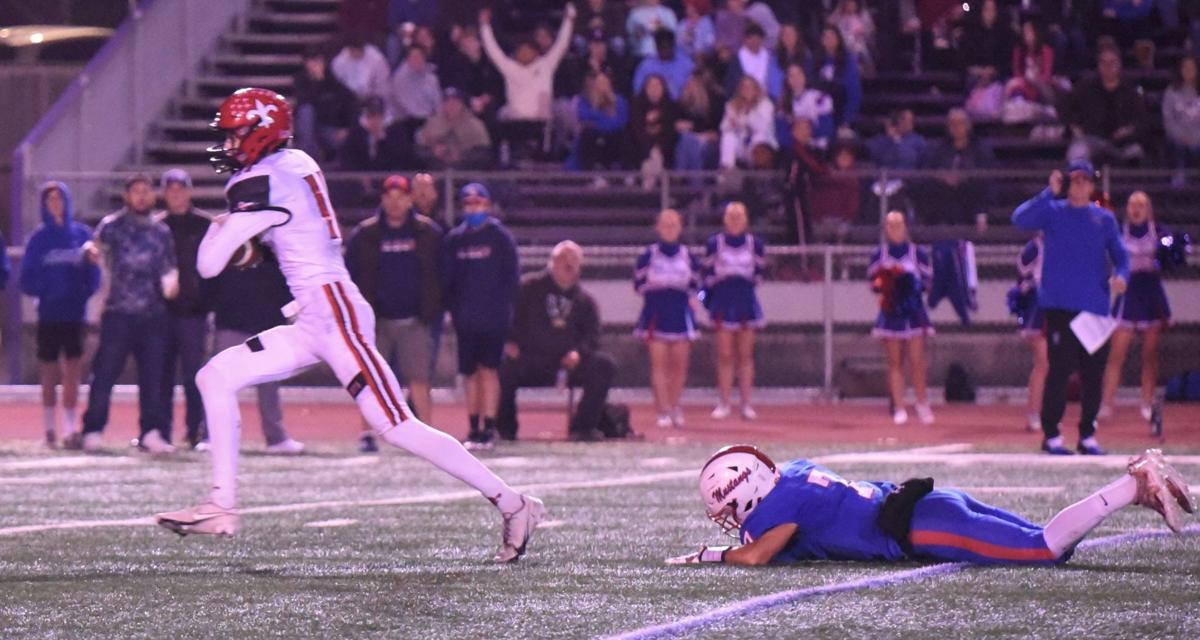 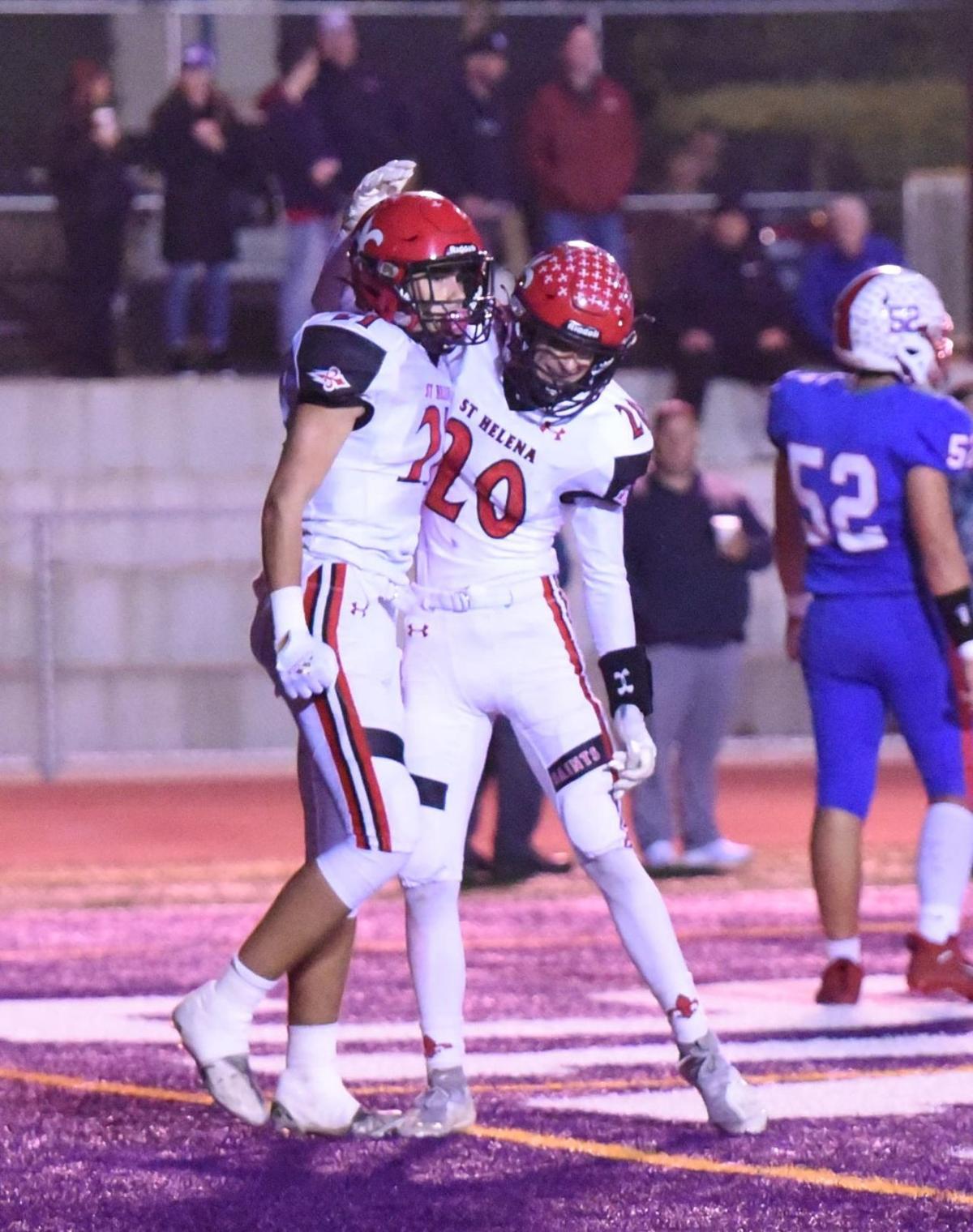 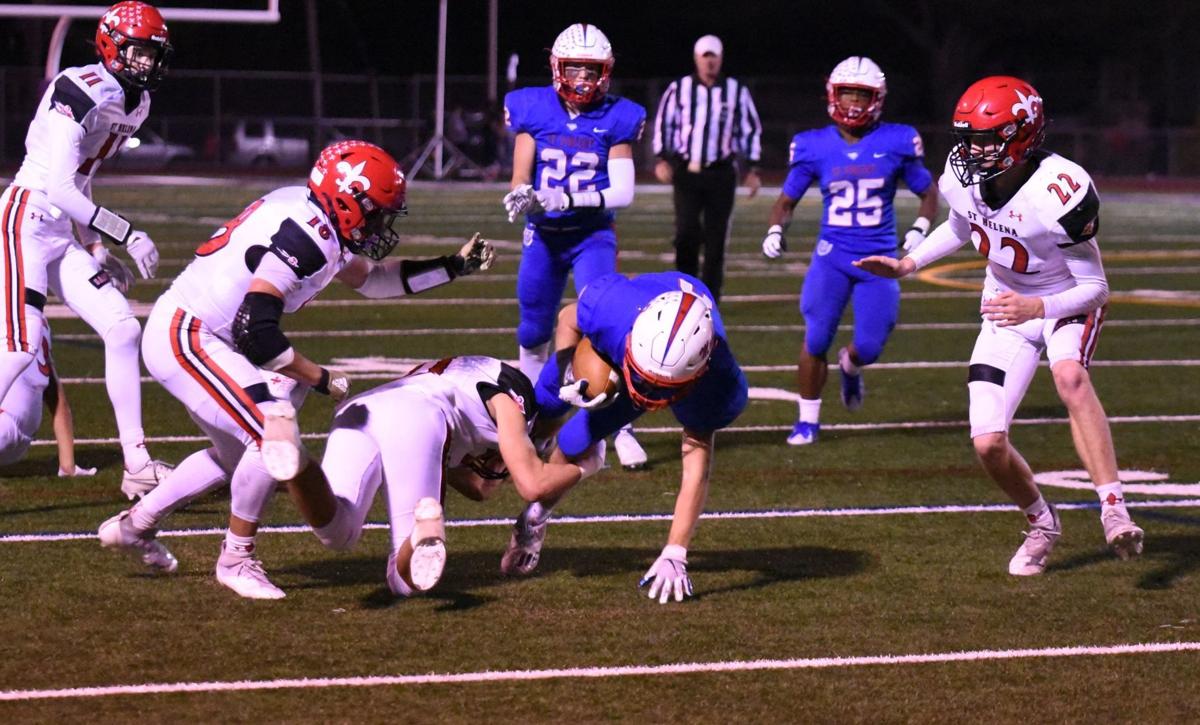 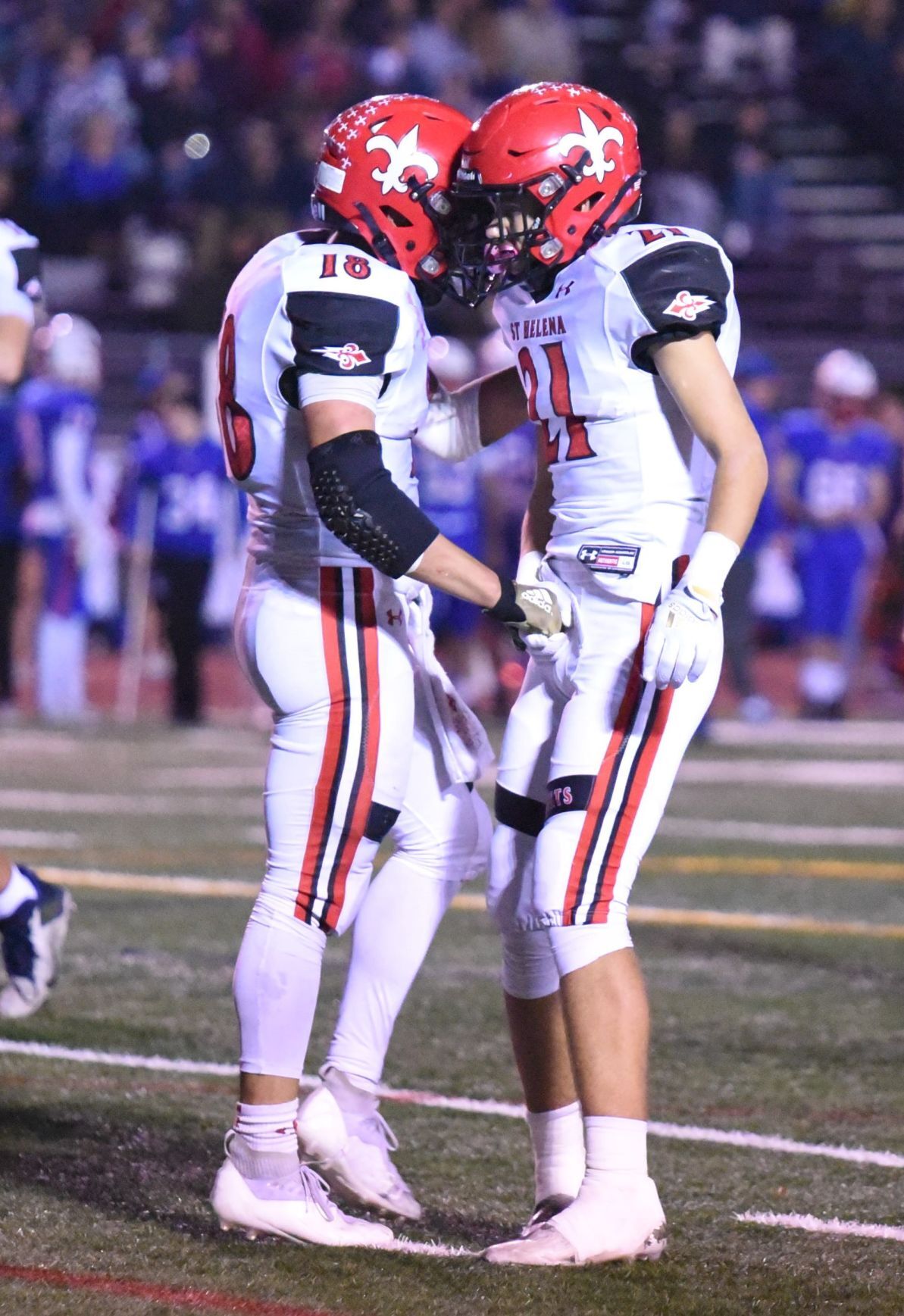 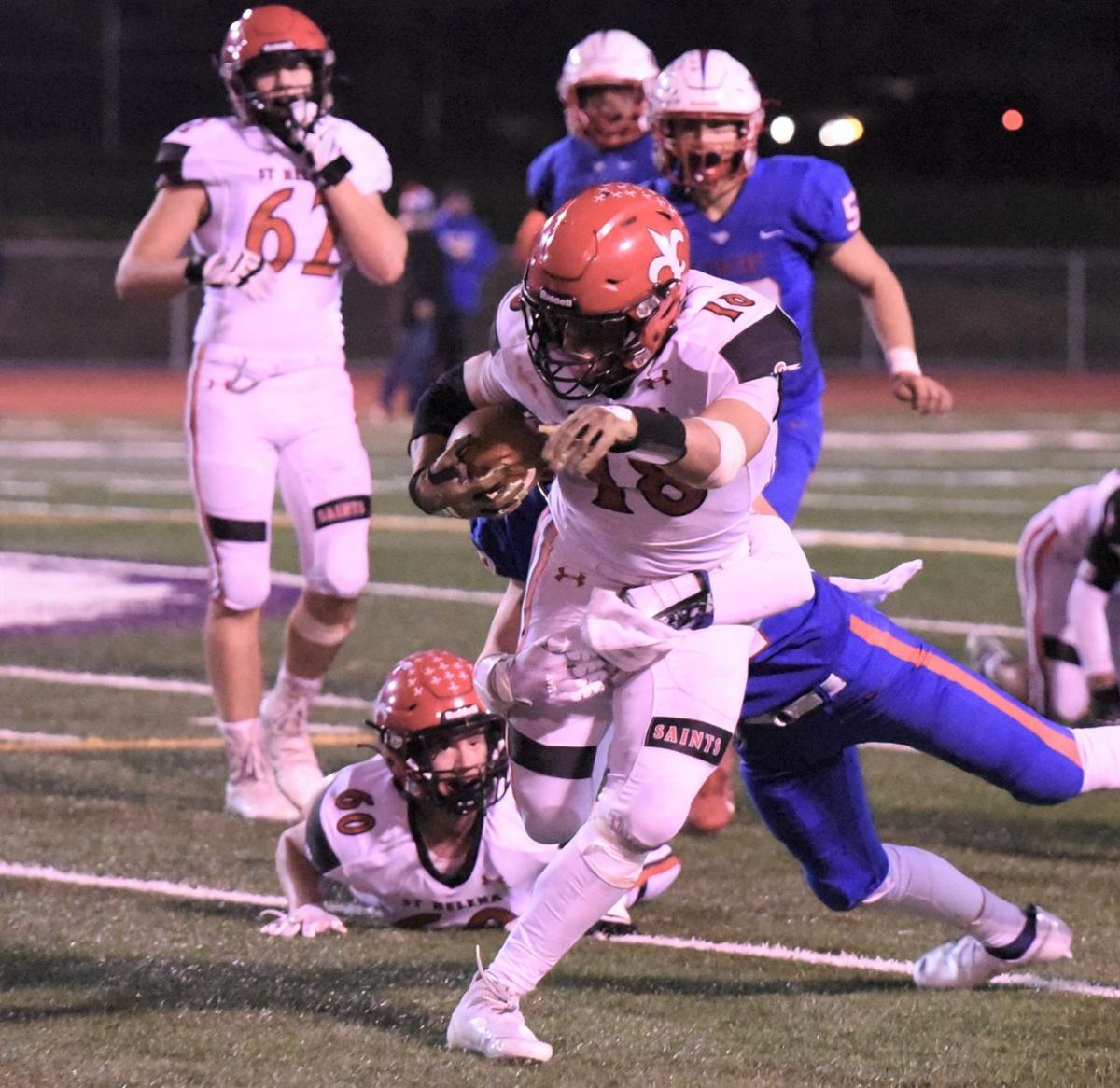 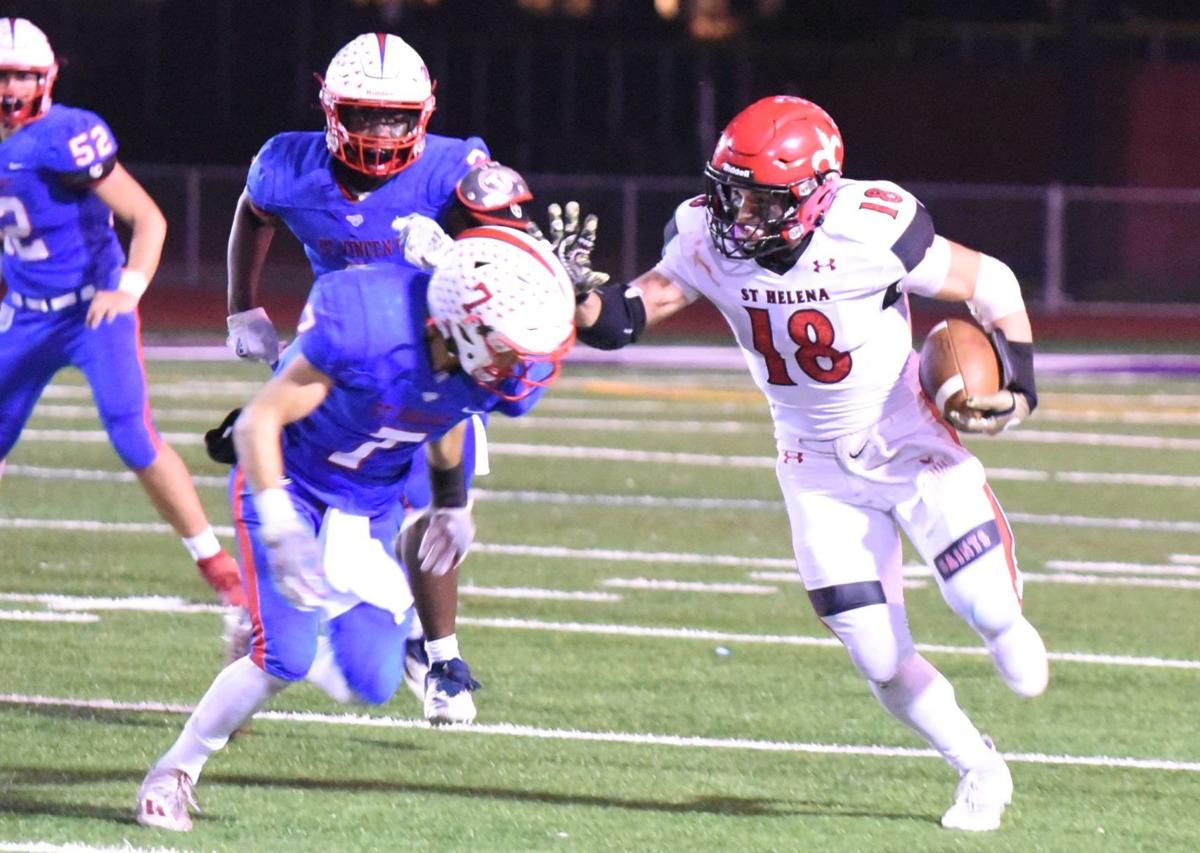 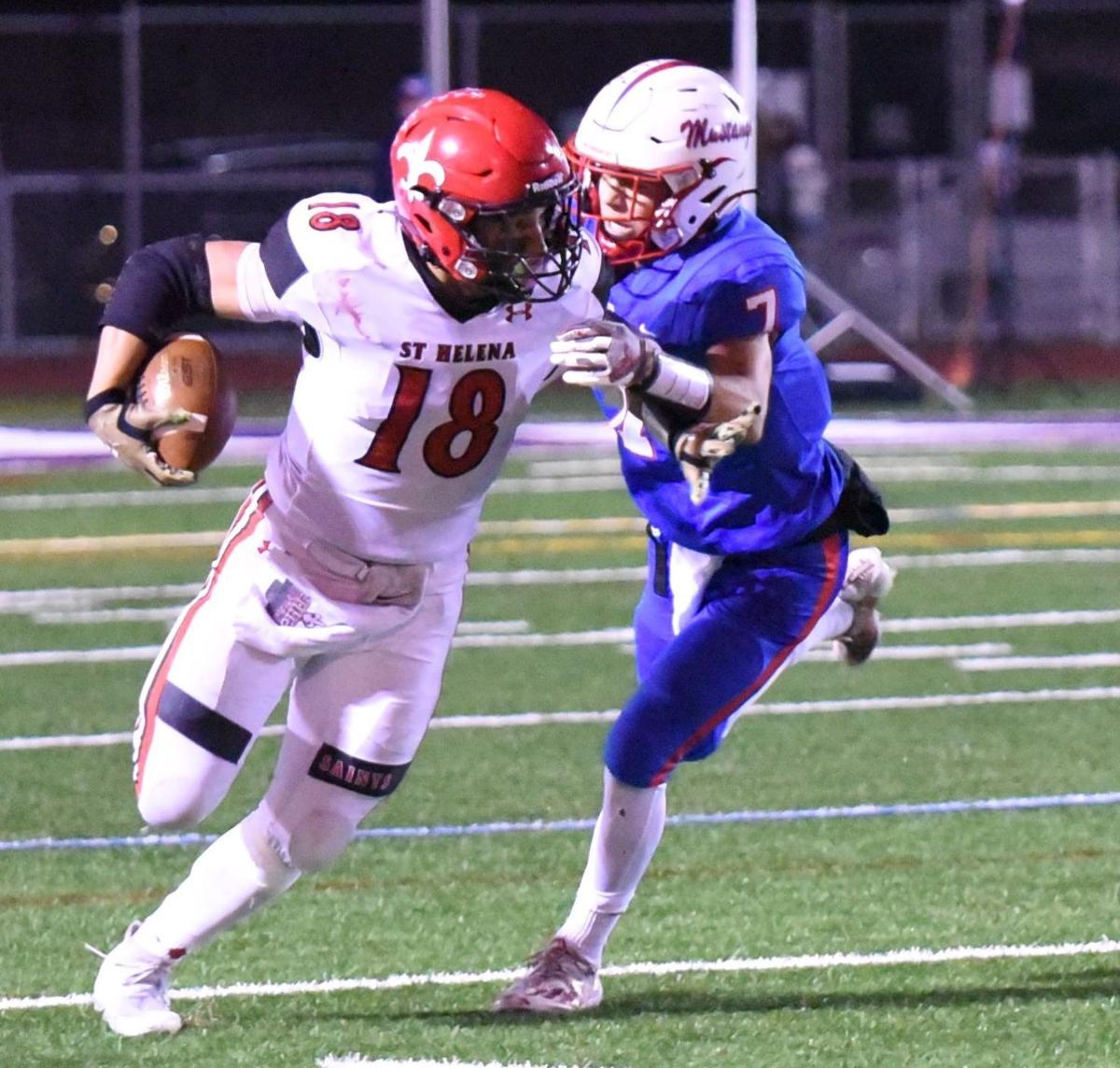 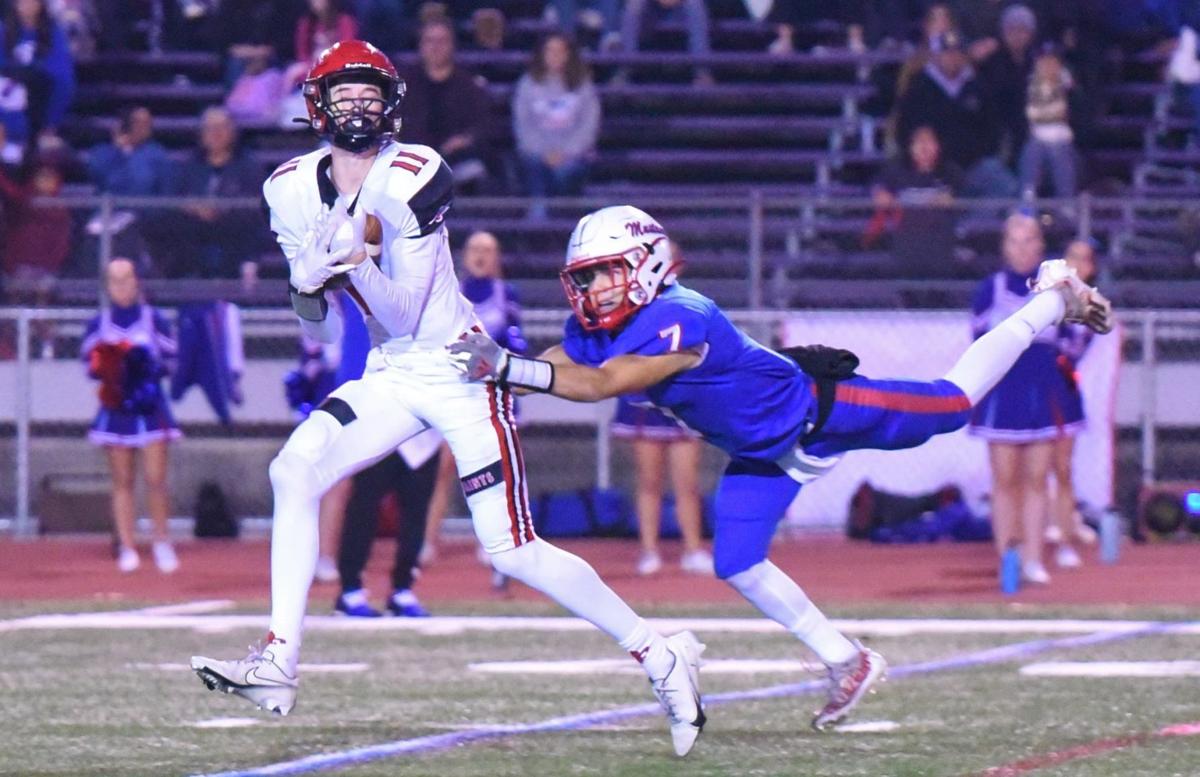 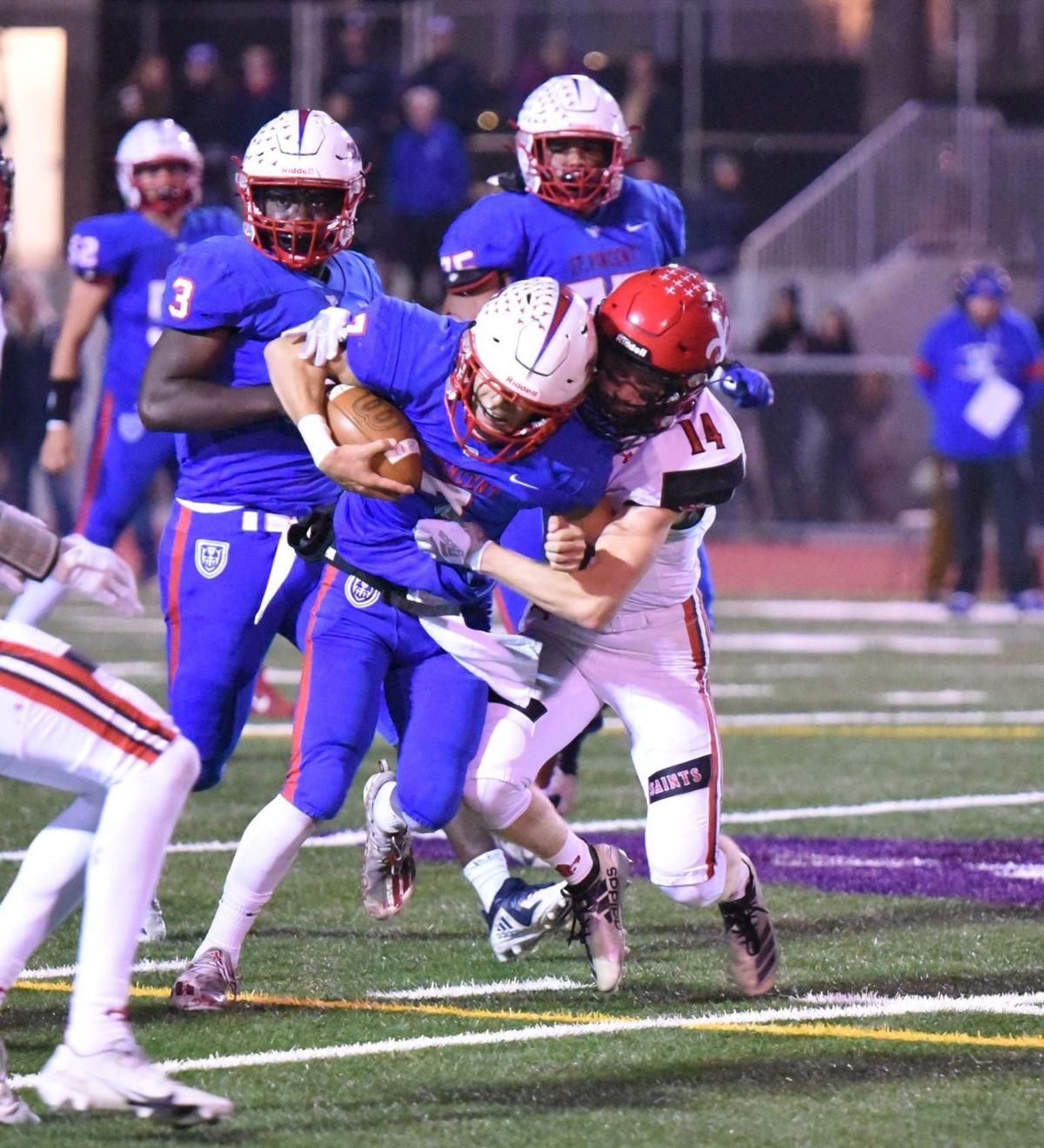 Only it was the Mustangs that got the Saints.

Top-seeded St. Vincent de Paul put No. 2 seed St. Helena on its heels in the early going and led wire-to-wire in a 54-32 win over the Saints. The Mustangs had yet to learn of their Northern California bowl game, but signs pointed toward a matchup with unbeaten University Prep of Redding.

St. Vincent (11-1) had handed the Saints (10-2) their only defeat of the regular season, a 14-13 setback at St. Helena in Week 3. The Saints were eager to avenge that loss and deliver their first section title since 1977.

“We knew this was going to be a challenge,” St. Helena head coach Ian MacMillan said. “It wasn’t going to be like our other playoff games. Turnovers will get you.”

Though the Saints gained 522 yards of total offense, three turnovers that created two St. Vincent touchdowns and a field goal were a significant undoing. St. Helena’s normally strong defense also did not have many answers, as the Mustangs piled up 367 yards of total offense. The hidden yards, however, came in field position. St. Helena’s average drive start was its own 27-yard line while the Mustangs average drive commencement was at midfield.

“I take nothing away from St. Vincent. They had a great game plan,” MacMillan said. “They’re very physical. They got a good push on us up front. That caused us problems both on offense and defense. We got a little momentum toward the end of the half. We were within one score. We had to match their scoring, but unfortunately we fumble it right back. From there we’re playing catchup and we’re a running team. It’s hard for us to come back from that.”

St. Vincent had takeaways that gave its offense field position at the St. Helena 20, 13 and 12. The first came when St. Helena fumbled the opening kickoff and the Mustangs recovered at the Saints’ 20, but the defense answered and St. Vincent settled for a 32 yard Gavin Crestetto field goal.

“That was a great sudden change as far as holding them down,” MacMillan said. “The defense did a great job, but then it got away from us a little bit. We tried to make some adjustments. But when you have three turnovers, it’s hard to win any kind of championship game.”

The Saints, however, looked like they would have the momentum they needed when Harrison Ronayne completed a 56-yard halfback option pass to Charlie Knight to get the Saints within striking distance, 23-18 at halftime. Knight later added an 18-yard touchdown catch from quarterback Spencer Printz, making a stupendous diving grab.

St. Vincent got the ball to start the second half and faced a third and 15, but St. Helena was flagged for a pass interference penalty that its coaches deemed questionable.

The Mustangs then scored 24 unanswered points to go in front 47-18. Bosarge connected with Dante Antonini for a 53-yard touchdown and conversion and Nathan Rooks scored on a 1-yard run and Liam O’Hare hit paydirt from 3 yards, with conversion runs from Antonini and Bosarge, respectively.

The Saints scored two touchdowns to make the score respectable, on Knight’s aforementioned touchdown grab and a 13-yard run by Printz.

“I give them credit for not quitting,” MacMillan said of the Saints. “They kept fighting to the very last minute. Not everything in life is going to go your way, but it doesn’t mean you just throw up your hands and say ‘Poor me.’ We don’t agree with some of the calls, but you can’t say ‘Poor me.’ The refs are against us. Life throws you curveballs, but how you handle them is what defines you as a man, father, husband. They handled it well.”

For the Saints on defense, Orlando Segura, Vincent Altemus, Jadon Meyer and Robledo each had a tackle for a loss. Robledo had five impact tackles (gains resulting in 1-3 yards), while Cal Lehman added three, Jorge Gonzalez had two, and Segura added one.

Though the aftermath of the victory stung in the moment, MacMillan exuded pride in St. Helena’s season. The Saints won sole possession of the North Central League I for the first time since 2011 and reached the section title game for the fourth time in school history.

“From a coaching standpoint, I don’t think we played our best game,” MacMillan said. “That’s tough when it happens in the section championship game, but the ride and the journey we’ve had with these young men was impressive. It’s been a pleasure to coach them. It’s like what (JV) coach Sam Licina told them: Everyone comes Friday night and sees the product, but no one comes during the week to see the hard work they put in. I know it stings for them right now.”