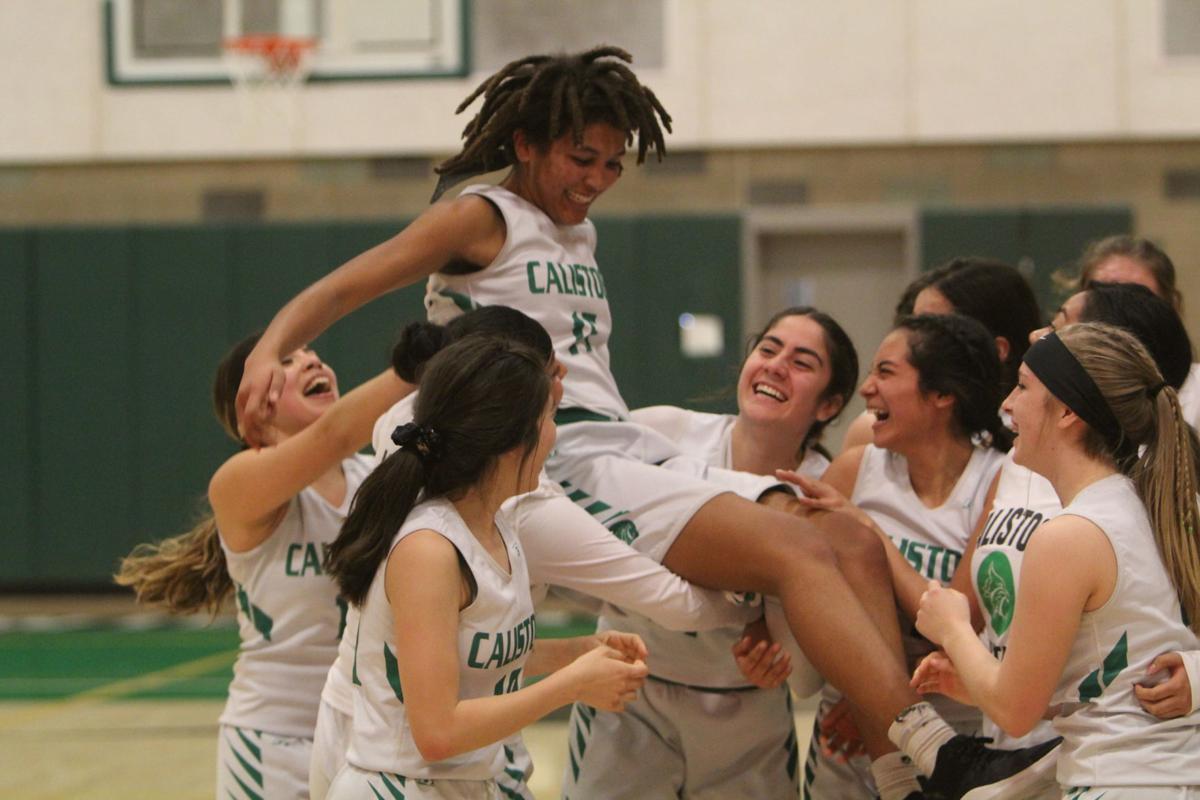 Calistoga junior Tully Leonard is lifted into the air by her teammates after her last-second putback layup gave the No. 2 seed Wildcats a 46-45 win over No. 7 seed Ferndale in the quarterfinals of the North Coast Section Division 6 girls basketball playoffs at Calistoga High on Saturday. 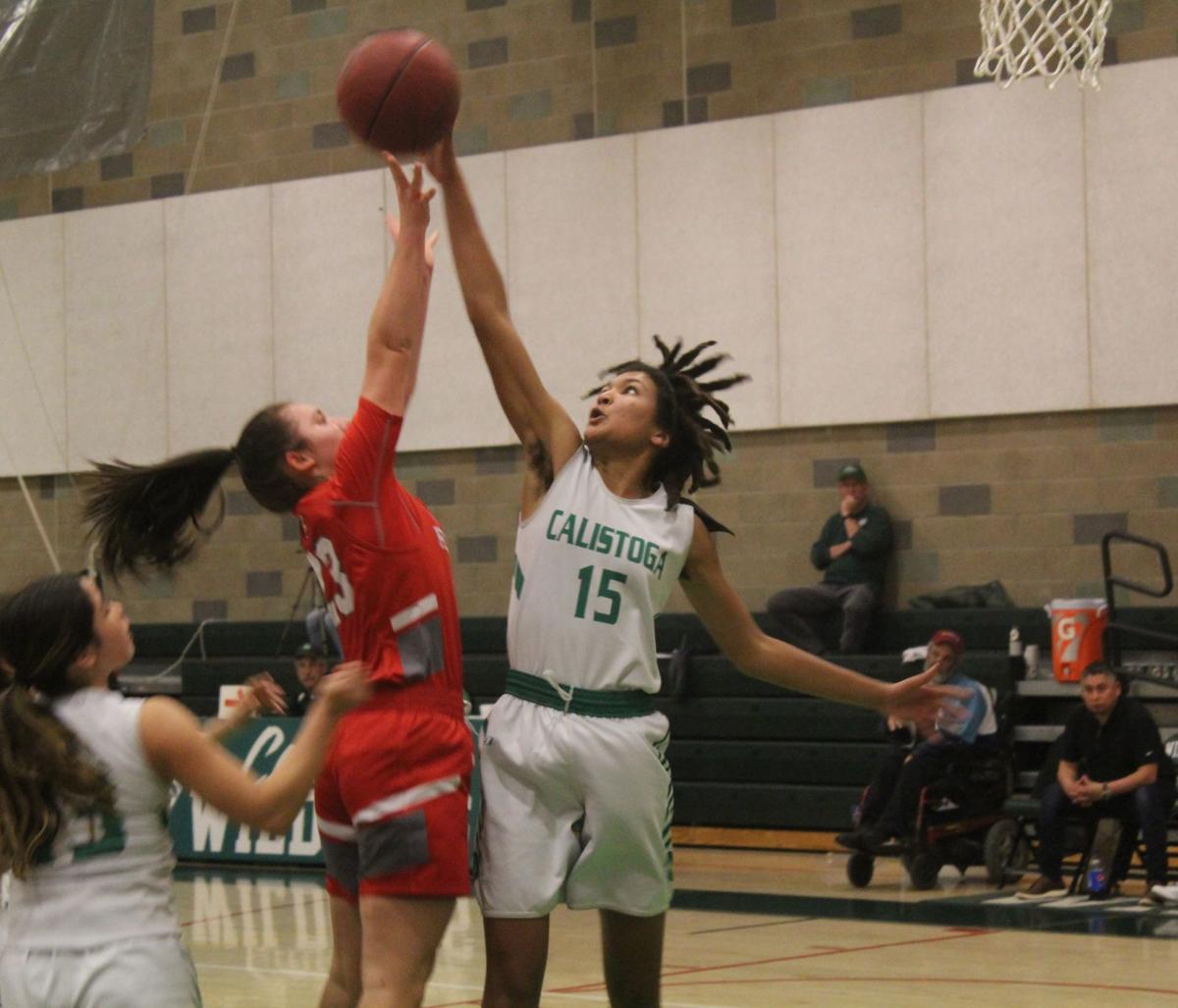 Tully Leonard gets one of her team-high five blocked shots against Ferndale on Saturday. 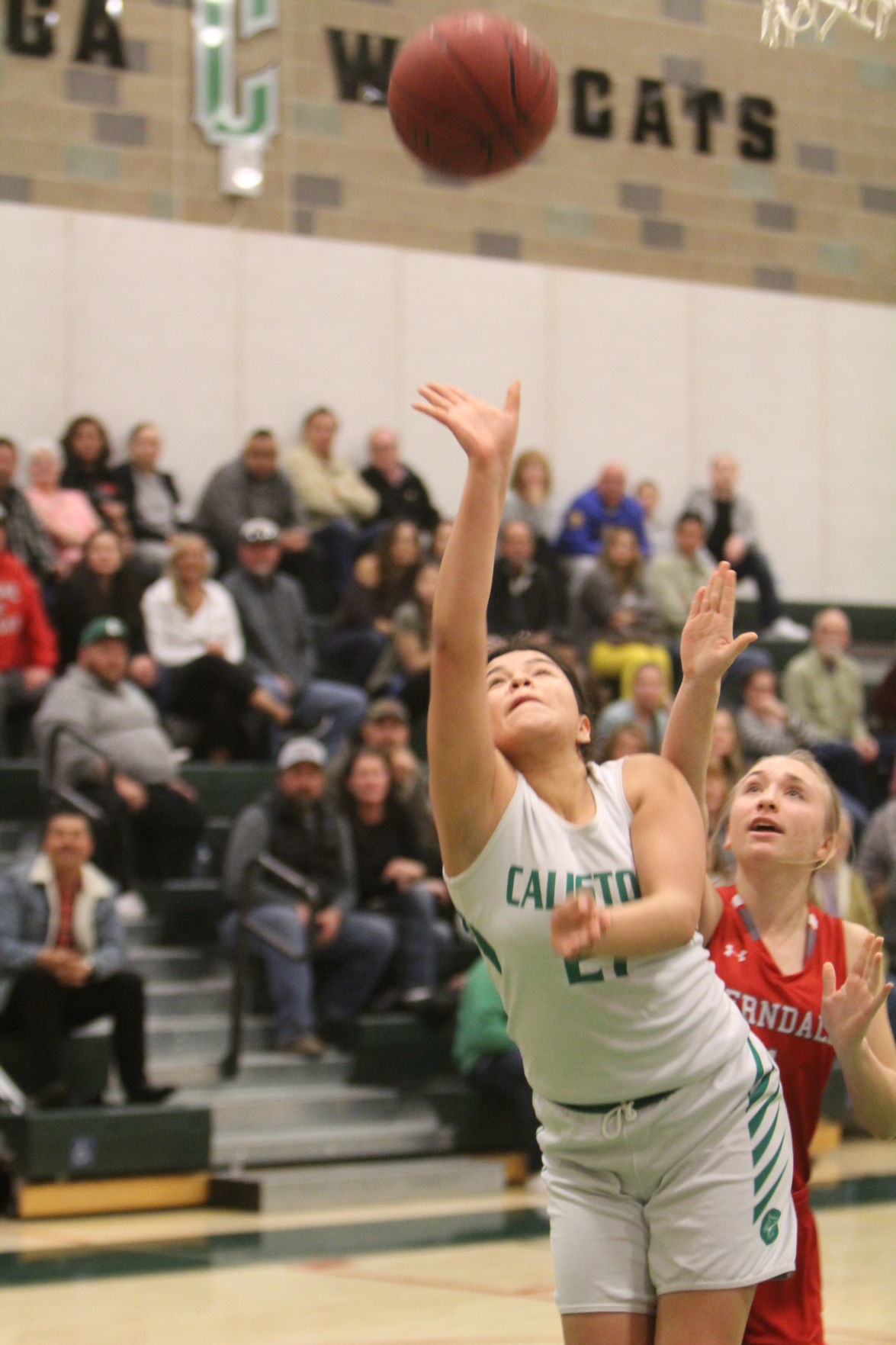 Calistoga's Hayseel Barrera puts up a layup during the Wildcats 46-45 win over Ferndale in the North Coast Section Division 6 girls basketball playoff quarterfinals on Saturday. 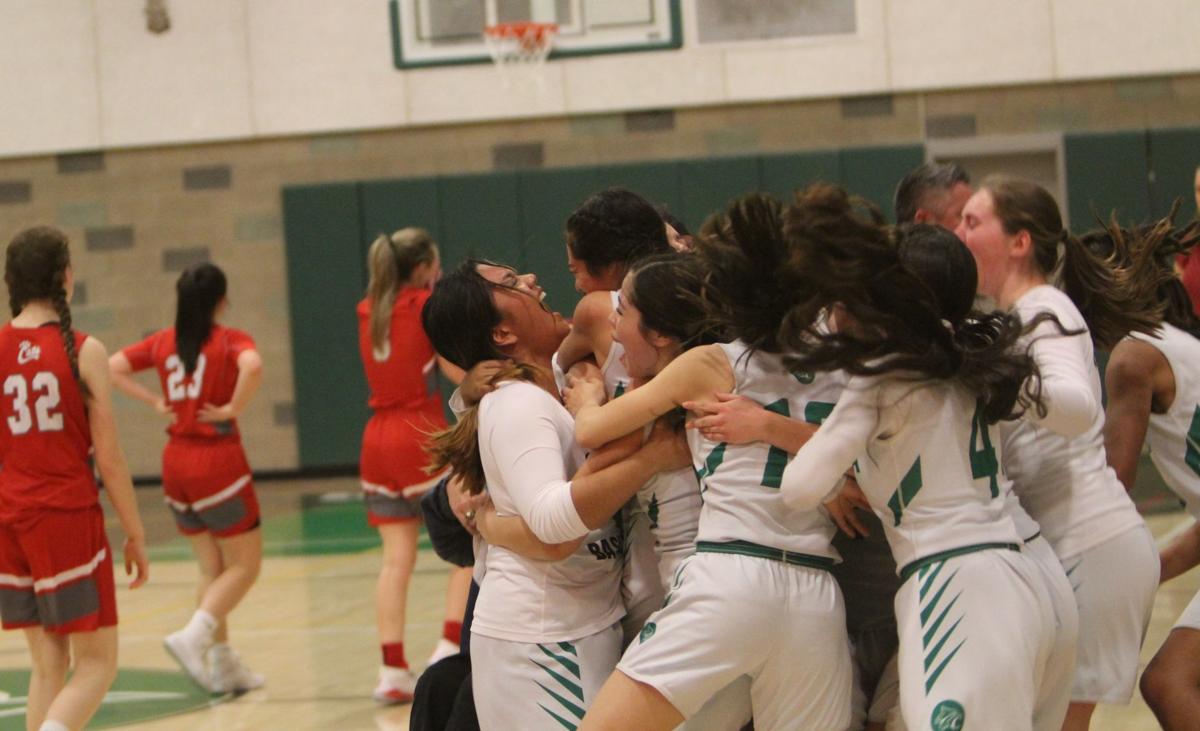 Calistoga after beating Ferndale on a last-second shot in the quarterfinals of the North Coast Section Division 6 girls basketball playoffs on Saturday. 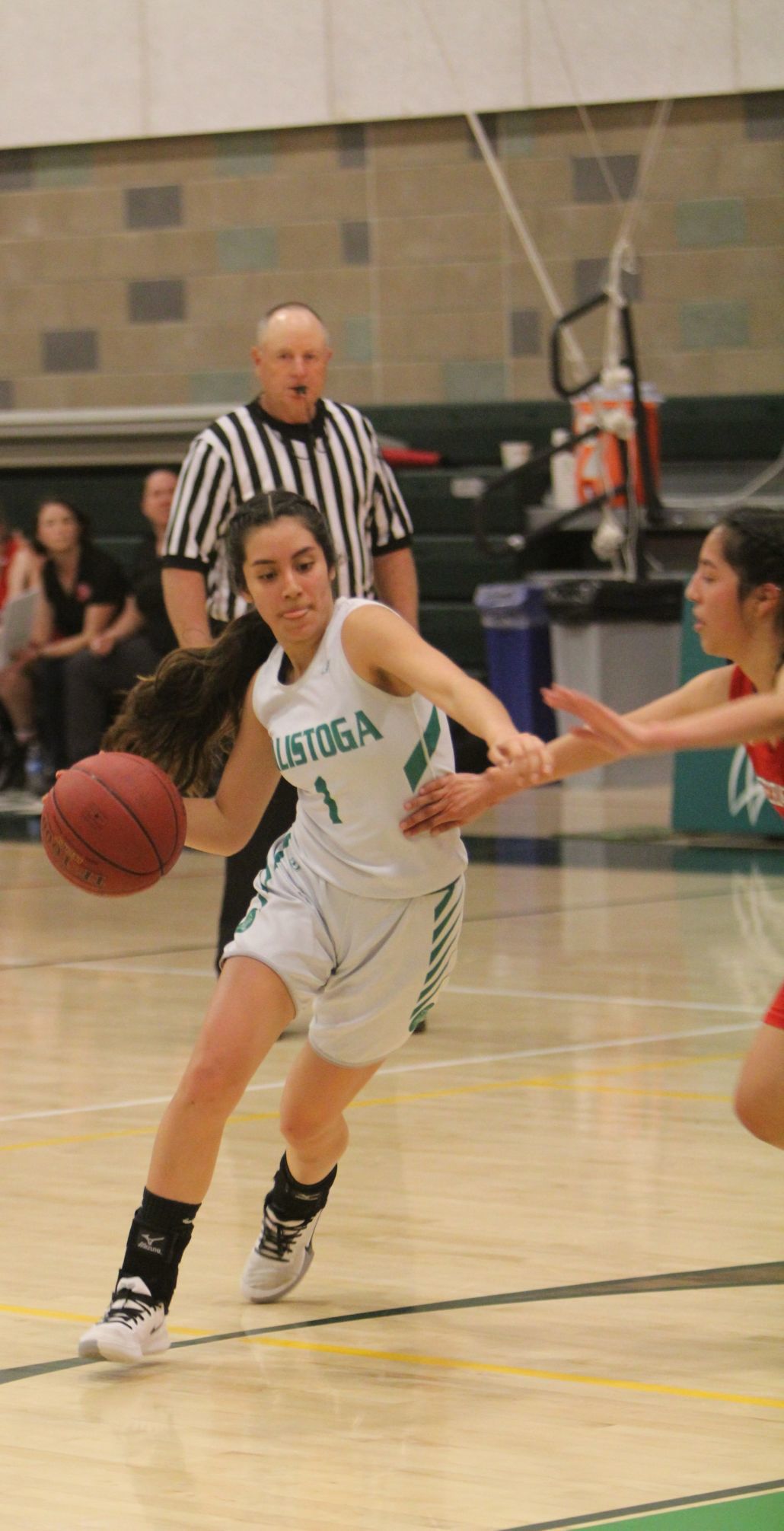 Calistoga's Litzy Infante tries to drive past a Ferndale defender during the Wildcats 46-45 win in the North Coast Section Division 6 girls basketball playoffs quarterfinals on Saturday.

Tully Leonard was on a mission as she dipped and dodged through a mob of Calistoga fans on Saturday night.

The Wildcat faithful still buzzing with excitement in the postgame scene at Calistoga High wanted to congratulate her on the thrilling win she had just helped her team secure, but the adulation and praise could wait. Leonard had another priority.

“Do you know where their coach is?” she asked about Ferndale head coach Jaime Ellsmore. “I need to shake her hand.”

Leonard hadn’t gotten the chance in the immediate moments following her last-second putback layup, which gave No. 2 seed Calistoga its 46-45 win over No. 7 seed Ferndale in the quarterfinals of the North Coast Section Division 6 playoffs on Saturday.

The final scene was pure pandemonium as teammates and fans had streamed onto the court to celebrate as soon as final buzzer rang.

Handshakes hadn’t exactly been the first thing on her mind.

The final sequence gave a fitting end to a dramatic and hard-fought game. After leading for a majority of the contest, Calistoga had to suddenly play catchup late in the fourth quarter. The Wildcats had cut the 43-38 deficit they faced with 1:30 left on the clock to just 45-44 with 17 seconds left. But Ferndale was at the line shooting two free throws and missed both.

A scramble for the rebound drained valuable seconds off the clock, but Calistoga’s Hayseel Barrera emerged with the ball from a tangle of bodies and found Lizbet Escobedo with an outlet pass. With 10 seconds left, Escobedo crossed halfcourt, took one more dribble and found Leonard under the hoop. The 6-foot junior rushed the first shot and missed but grabbed her own rebound and followed with another try. It bounced and bounced on the rim, and then dropped through.

With one second left, Ferndale scrambled to inbound the ball and try to get off a heave. But the final buzzer rang before the vistors had a chance, and Calistoga’s gym descended into chaos. The student section rushed the court, joining the players off the bench in a dogpile.

“As soon as I saw Lizbet pass me the ball, I thought ‘Oh, I can’t miss this shot,” Leonard said postgame. “This is like the last shot of the game.’ So as soon as the first one missed I knew I had to grab the rebound and shoot it again immediately and that’s just what I did.”

She scored only 5 points but grabbed a team-high 11 rebounds and blocked 5 shots. She also made her free throws when they mattered, knocking down a crucial pair down the stretch after going 1 for 5 in the first half.

As a team, the Wildcats followed a similar trend. They went 2 for 14 from the stripe in the first half but hit 8 of 12 in the fourth quarter. They went into halftime with a 24-18 lead after surging ahead with a commanding 13-0 run that stretched from the end of the first quarter into the second. But they watched their lead slowly disappear as the game entered its later stages.

Ferndale took its first lead of the second half 15 seconds into the fourth quarter at 31-30 then put together a three-minute stretch that pushed Calistoga to the brink of elimination. With a combination of 3-pointers, free throws and points off turnovers, Ferndale went on a 12-5 run and had firm control of the game with about four minutes left.

Then Calistoga (22-3) dug deep. It hasn’t been in many close games this season, but this is a veteran group with deep playoff experience already under its belts. They knew what they had to do.

They cut it to 43-38 with 3:40 left and then clamped down on defense until Vanesa Quiepo’s layup with 1:30 left made it 43-40. With 1:05 on the clock, Ferndale was back at the line shooting two but missed both and fouled Escobedo, who turned around and sunk both her foul shots to bring it 43-42 with a minute left.

Calistoga got the ball back 10 seconds later on a Ferndale travel. But the hosts failed to convert the free possession into points, instead fouling the visitors and sending them back to the line. This time, they sank both to take a 45-42 lead with 30 seconds remaining. Calistoga quickly came down and scored to make it 45-44 and called timeout, wanting to regroup and get on the same page as their historic season hung in the balance.

Coming out of the stoppage, they fouled again to send Ferndale back to the line with 17 seconds left. The following sequence – two misses, scramble, loose ball, rebound, outlet, breakaway, entry pass, layup, miss, putback, good, buzzer, chaos – will be remembered for a long time in Calistoga.

“I’ve never felt so much panic,” said senior Litzy Infante. “But I never had a negative thought in my mind. When they were taking their free throws, I don’t even know how many seconds were left, but I was like ‘We got this, we got this.’”

Infante finished with 6 points, 4 rebounds and 2 steals. Quiepo led the way for Calistoga with a game-high 21 points with 5 steals.

The Wildcats will look to keep the magic going as they move on to the NCS semifinals for the second straight season. Being one of the final four teams left in the NCS also likely means they’ve secured a bid to the NorCal playoffs once again as well.

They’ll host No. 14 seed Tomales (12-7), a league foe, in the semifinals on Wednesday. The Braves are on their own Cinderella run this postseason, having upset No. 3 seed SF Waldorf, 49-29, in the first round and No. 6 seed Round Valley, 56-49, on Saturday. Calistoga swept Tomales in league play this year.

The Calistoga girls basketball team had their 11-game winning streak snapped by St. Vincent in a non-league game on the road Feb. 13.

The Wildcat girls took care of business in the first round while the boys succumbed to a second-half comeback.

Calistoga junior Tully Leonard is lifted into the air by her teammates after her last-second putback layup gave the No. 2 seed Wildcats a 46-45 win over No. 7 seed Ferndale in the quarterfinals of the North Coast Section Division 6 girls basketball playoffs at Calistoga High on Saturday.

Tully Leonard gets one of her team-high five blocked shots against Ferndale on Saturday.

Calistoga's Hayseel Barrera puts up a layup during the Wildcats 46-45 win over Ferndale in the North Coast Section Division 6 girls basketball playoff quarterfinals on Saturday.

Calistoga after beating Ferndale on a last-second shot in the quarterfinals of the North Coast Section Division 6 girls basketball playoffs on Saturday.

Calistoga's Litzy Infante tries to drive past a Ferndale defender during the Wildcats 46-45 win in the North Coast Section Division 6 girls basketball playoffs quarterfinals on Saturday.