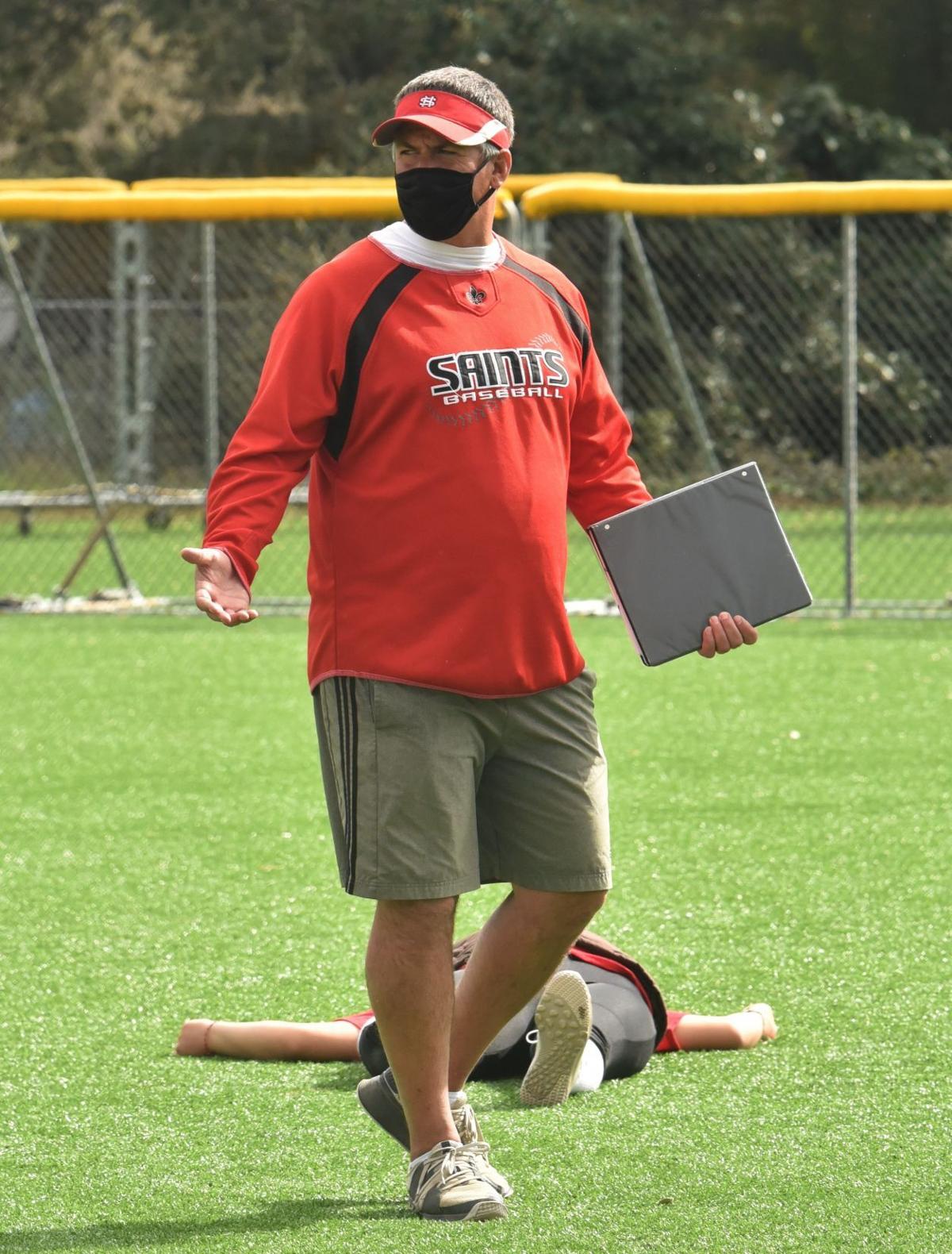 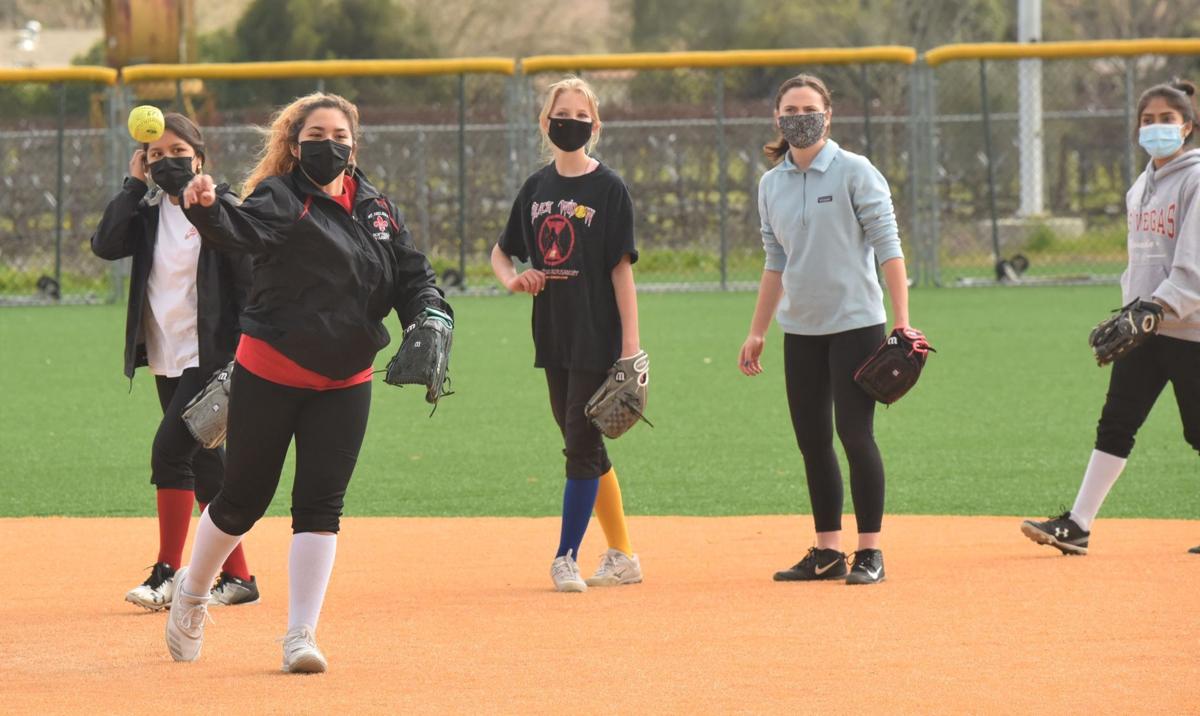 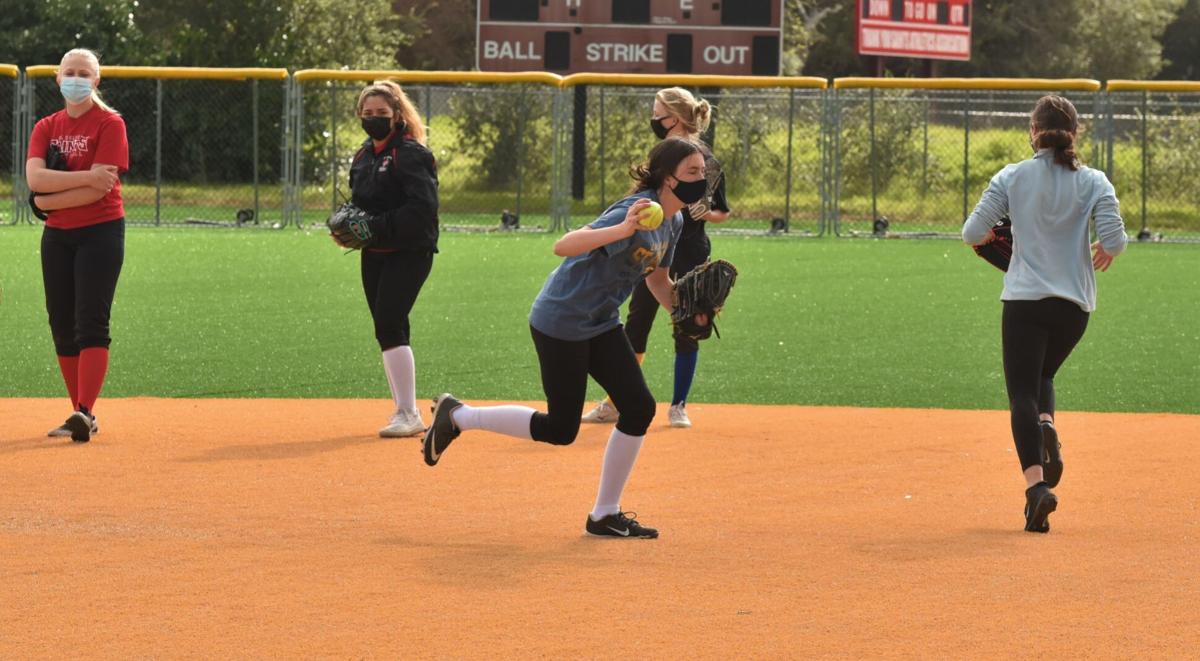 Sofia Cupp looks to throw as Lily Desmond rans back to the line during a drill at practice March 9. Looking on are, from left, Carter Dahline, Gema Jimenez and Reese Dahline. 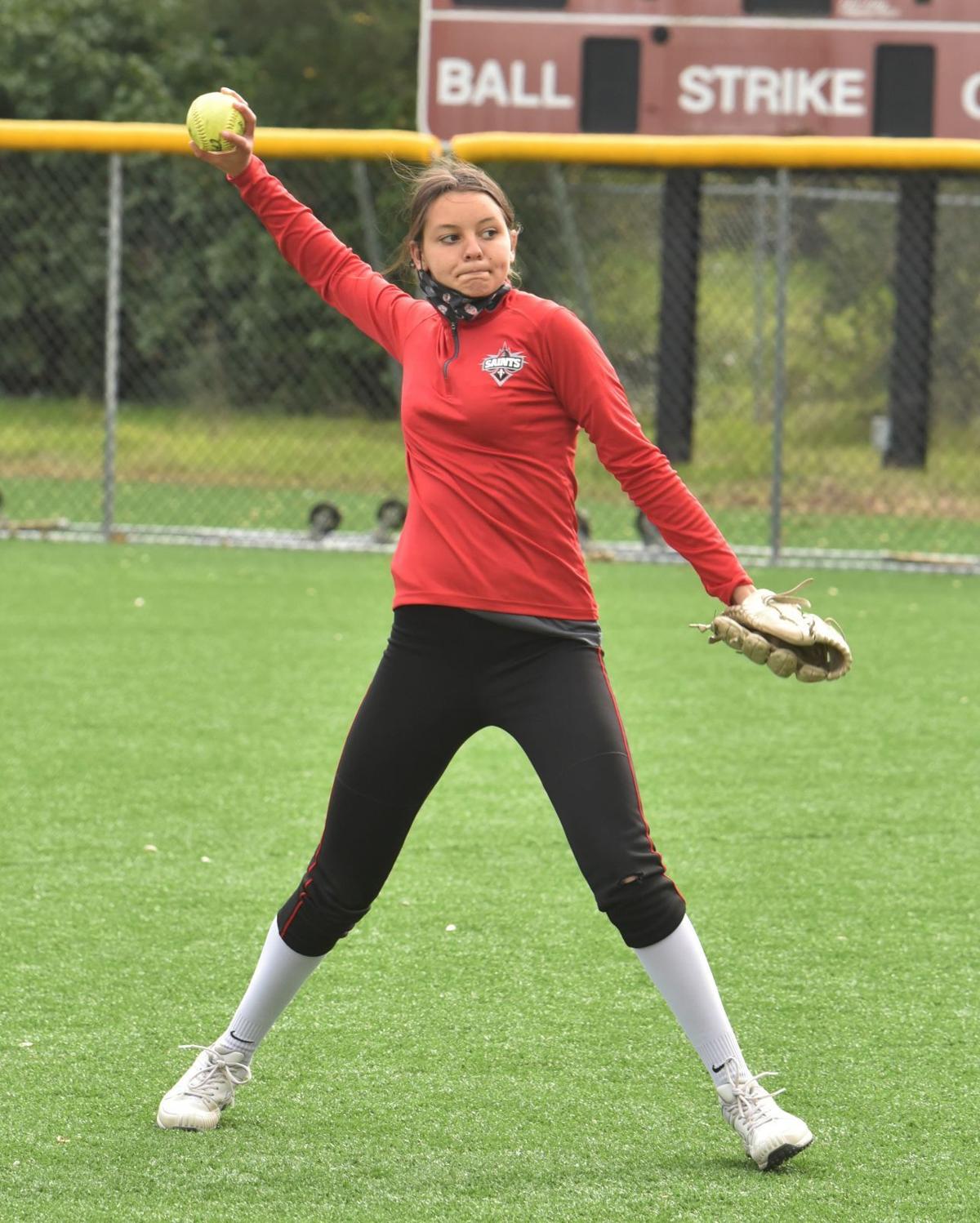 St. Helena High sophomore Aribella Farrell, one of the Saints' two returning pitchers, warms up at their March 9 practice.

The St. Helena High softball team may be young in that it has only three seniors, but 10 of the 13 Saints played at the varsity level last year or the year before.

They would be more than happy to be the first St. Helena team to play this school year, and they would love to play the opponent that was next on their schedule before the COVID-19 pandemic canceled their 2020 season.

St. Helena was 2-1-1 then and had seven seniors who are now gone. They were to host Healdsburg in their fifth game on March 12, 2020. Now they will visit the Greyhounds for their opener at 4 p.m. Monday.

“We’re at the same place we were last year when we shut it down,” noted second-year head coach Brandon Farrell, who stepped down last month as football head coach after 12 seasons.

Leading the Saints in her fourth varsity season as the pitching ace is senior Carter Dahline, who also plays volleyball and is on the St. Helena Thunderbirds mountain biking team.

New to the varsity are seniors Daniela Mendoza and Alexa Avila. All three juniors, Alexandra Hill, Andrea Tobon and Jessica Ramirez, last played during the 2019 season.

Dahline led the 2019 team with a .488 batting average, 21 hits, six doubles and the Saints’ only home run, and also pitched 76 of their 83 innings that season. Hill led that team with 11 RBIs and added four doubles.

“We’ve been practicing for a month off and on, about every other day, and the girls have had a lot of positive energy at practice,” Farrell said March 8. “We’re still a young team. We’re going to have five sophomores and a freshman out there, so there’s still plenty of youth on this team, which is nice, but at the same time they make youthful errors.

“We have pretty good pitching depth. I feel comfortable with our pitchers when they’re healthy, and it’s nice to have a third one. Multiple pitchers is a luxury that most high school programs this size don’t have.”

The Saints are slated to play 20 games in seven weeks, ending with a road game against league rival Middletown on May 21.

“We still have to determine how some of the logistics and protocols work and things like that and we’ve got to be patient, as things change frequently over the course of a day and a week and a month,” Farrell added on March 8. “The girls don’t have to wear masks while they play but it’s recommended, and in the dugout they have to wear masks and sit apart.

“But they’ve been coming out here wearing their masks and they are enthusiastic about the season. “They know that after last season, every opportunity to play is an important one.”

WATCH NOW: HOW CAN WE MAKE UP FOR NOT HAVING MARCH MADNESS LAST SEASON?

The Napa High football team routed visiting Casa Grande of Petaluma on Friday night, 40-14, bouncing back from a last-second, 14-13 loss at Pe…

Sofia Cupp looks to throw as Lily Desmond rans back to the line during a drill at practice March 9. Looking on are, from left, Carter Dahline, Gema Jimenez and Reese Dahline.

St. Helena High sophomore Aribella Farrell, one of the Saints' two returning pitchers, warms up at their March 9 practice.