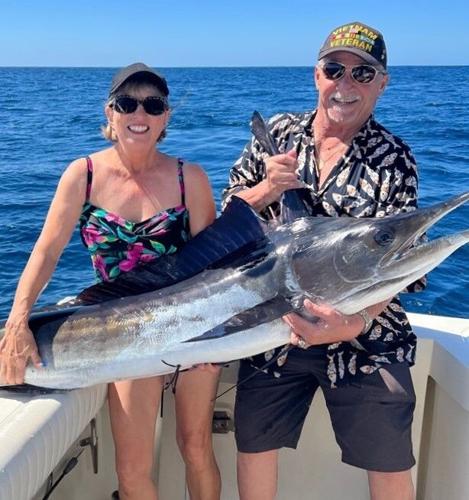 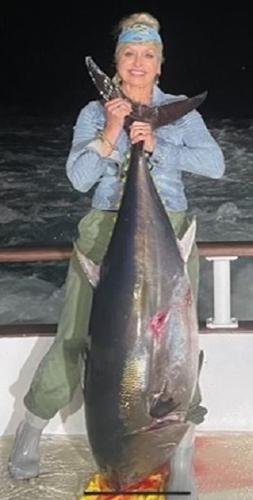 Malia Gianelli of Napa had a successful day fishing in San Diego aboard the Polaris Supreme, reeling in this 175-pound blue fin tuna. 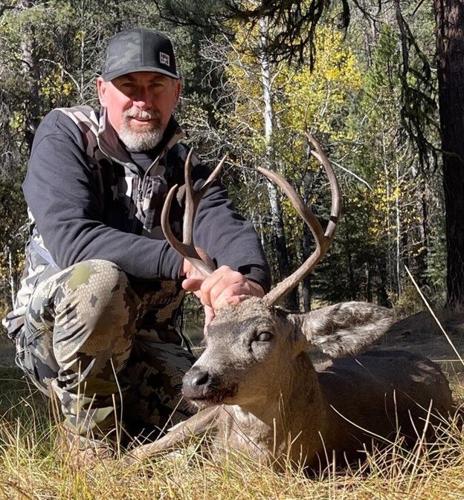 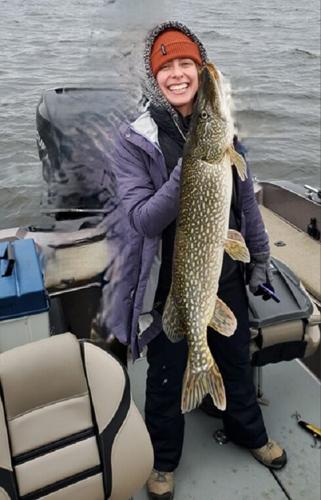 Natalie Murray traveled to Lake of the Woods in Canada with her father and landed this beautiful Northern Pike. 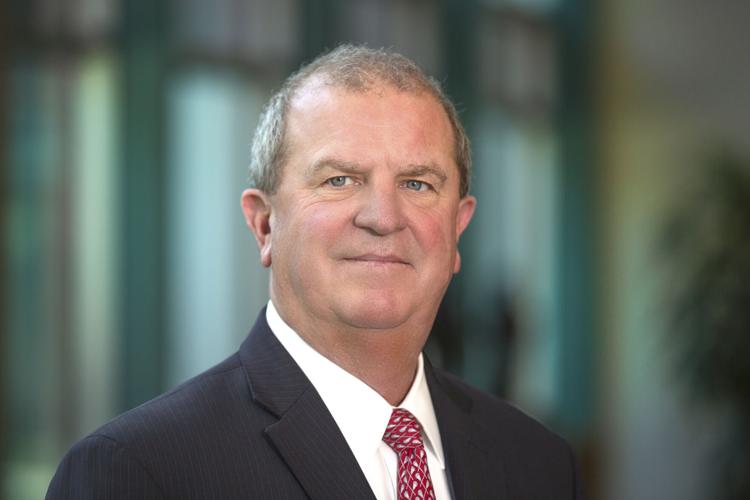 The sportfishing fleets operating out of the San Francisco and Bodega bays continue to see limits of Dungeness crab and rockfish. The California Department of Fish and Wildlife will conduct another whale entanglement assessment on the first of December and the results will determine the opening of the commercial crab season.

Golden State Sportfishing has experienced limits action on white sturgeon fishing in the Carquinez Strait. Many of the fish are within the slot limit of 40-60 inches, however, all fish above and below that size must be released. The daily limit is one per day and up to three per season. A bite this good without much rain is a promising sign for the remainder of the season.

The water is very cold in Tomales Bay and the chances of a halibut in November are slim, but not zero. There was at least one caught on dead bait by Hog Island on Sunday. But halibut fishing conditions do not get too much worse than they are now — except when there is too much freshwater in the bay, which hasn't been an issue for a few years — so if one or two are biting now, who knows?

I jumped aboard the Playin Hooky out of Emeryville with some friends. We headed to Stinson Beach to set our crab hoops, then headed to double point for some rockfish. After catching 60 rockfish, we headed back to the crab gear and caught 65 crabs in the 22 hoop nets.

The commercial season has been delayed until at least December due to whale entanglement risk. The crabbing should remain strong for the recreation anglers without the commercial competition.

There is still good water clarity in the Napa River despite the recent rain. With the onset of cooler weather, we will begin to see the bite become less active. The striper bite has slowed down for the first time in weeks. Anglers are still reporting a decent bite, just fewer numbers of fish being caught.

The most current reports indicate the bank anglers are catching the usual schoolie size with a few 18- to 24-inch stripers with anchovies and sardines being the most effective bait. Live bullheads, mudsuckers, and jumbo minnows seem to be fairing the best. Trolling, and casting Rattletraps, LV-500's, Swimbaits and Broken Backs throughout the river will still produce fish, but much patience is needed when casting in the colder water.

This time of year, the spooning method with 2-4 ounces of P-Line Lazer Minnows is most effective when looking for stripers in the cooler shallow depths. The sturgeon bite in the river is still slow to fair at best, but a few are being caught each week. Look for more fish to start moving into the system. This time of year, try salmon roe as a top bait.

At Lake Berryessa, crappie, smallmouth bass and catfish are showing up within the shad schools, and the slabs are taken on small spoons. The crappie bite will continue to improve as the water cools. The trout and salmon are spread out; trollers who spend the time are finding limits. As the lake cools, I would expect the bite to pick up once the lake turns over. The lake held at 50% capacity with the surface 394 feet above sea level, 46 feet below the Glory Hole.

To volunteer for this project, look for acorns on your property or local parks. Valley oak, coast live oak, blue oak and black oak acorns are ones that need to be collected.

Refer to naparcd.org/collect-local-acorns for information on the most viable acorns and the documentation needed when submitting them to the drop off at 1303 Jefferson St., Suite 500B, in Napa.

A new study from Stanford has revealed the staggering and concerning amount of microplastics whales eat every day. The biggest mammals on Earth are forced to consume up to 10,000 of the tiniest man-made pollutants daily, a number far higher than previously imagined. The study published in the Nature Communications Journal this week shows the consumption of microplastics comes not from the mammal gulping them down directly in ocean water, but through one giant step down in the food chain as they consume krill, their primary prey.

Microplastics are a growing concern to the health of the world's oceans, where they are now widespread. About the size of a grain of rice, the toxic particles are polymer fragments created through the erosion of plastic waste. They have also been found in a range of far-flung environments, from the floor of the Mariana Trench to the summit of Mount Everest, and even in the fresh Antarctic snow.

Krill, the shrimp-like crustaceans that form almost the entirety of a blue whale’s diet, can consume microplastics due to their "gastric mill" digestion system and complex digestive enzymes.

As part of a decades-long research project on the habits of whales, scientists at Stanford studied the feeding channels of blue, fin and humpback whales around 50 to 250 yards below the water surface. This region of the ocean is home to the highest population of microplastics-filled krill. The amount of microplastics at that depth, largely in the intestines of the crustacean, is tenfold higher than on the surface, the study found.

Specifically, the study found that blue whales, which can weigh up to 200 tons, consume approximately four tons of krill and eat 10,000 toxic particles a day, while the humpback whale primarily eats small fish but still consumes around 200,000 pieces of microplastics. Fin whales, which eat both krill and fish, ingest between 3 million and 10 million pieces.

Scientists think the consumption of microplastics by krill may make them less fleshy, reducing the caloric value to their giant predators.

The Napa Valley Ducks Unlimited chapter held its annual banquet at the Napa Elks Lodge on Nov. 5. Funds raised will go to conservation and restoration of habitat for waterfowl and over 900 other species. As a past dinner chairman in Napa this is a fun event for a good cause. Visit napadu.org for more information.

The California Department of Fish and Wildlife is offering free swan tours in Yuba County near Marysville on select Saturdays, November through early January, in partnership with the Mathews Rice farming operation. This area boasts one of the largest populations of overwintering tundra swans in the Central Valley, as well as abundant geese, ducks, shorebirds and raptors. More information can be found wildlife.ca.gov.

In September, Governor Newsom signed SB 856, a bill sponsored by Bill Dodd, as a response to the increased destruction and pressure that overabundant wild pig populations place on wildlife habitats and ecosystems throughout California.

Beginning in 2024, this law will allow hunters to purchase a single wild pig validation to harvest multiple pigs, rather than one pig per tag under current law. It also includes changing the classification of wild pig from "big game mammal" to "exotic game mammal," which will now allow youth age 11 and younger to purchase a validation.

Because they are game mammals, prohibition of night hunting and use of lights will remain in effect. Full implementation and changes will require adoption of regulations to address pursuit, take methods, and additional details.

California’s recreational ocean salmon season has come to an end, and so is the California Department of Fish and Wildlife’s ocean salmon monitoring program. Anglers assist CDFW employees or agents who ask about their trip or request to examine the catch, as the information collected is essential to the science needed to support continued ocean salmon fishing opportunities in future years.

Each year, approximately 40 million fall-run Chinook salmon are produced at California hatcheries. A minimum of 25% of those juvenile salmon are implanted with a Coded Wire Tag in their snout prior to release into California’s rivers, bays, and estuaries. A CWT is small (less than or equal to 1 millimeter in length) metal tag with a laser-engraved code that corresponds to a specific release group of hatchery salmon. Each code provides biologists with information about that fish, such as the hatchery of origin, brood year, run type, release date, release location, and the number of tagged and untagged salmon in that release group.

Each salmon containing a CWT is also externally marked with a clipped adipose fin (the small, fleshy fin between the dorsal and caudal fin) to allow for easy visual identification in the field.

When a sampler identifies an adipose fin-clipped salmon on the docks, they will measure the length of the fish and remove the head for recovery of the CWT. The heads are then transported back to the CDFW lab, where the CWT will be removed and decoded under a microscope.

Survey participants who have their salmon head collected have the option to receive the CWT information obtained from their fish after it is processed at the lab. On rare occasions, salmon raised at hatcheries in Alaska or British Columbia make a long journey to waters off California and are taken in our ocean salmon fishery. On request, the CDFW Ocean Salmon Project will provide anglers with the biological information for their tagged salmon, including the age, hatchery of origin and release information.

Angler participation in the ocean salmon sampling program is critical to fishery managers and biologists tasked with ensuring the future use and conservation of this iconic species. The data are used to make stock abundance forecasts, which inform the development of annual fishing regulations that allow for harvest of more abundant stocks and meet conservation objectives designed to protect stocks of concern.

1959: Connie Dierking fouls out of game in first quarter

Caen Healy, a 2016 Napa High grad who kicked for the football team, played defense for the soccer team and founded a campus cricket club, is now a sale associated for the Barracuda Championship golf tournament played each July in Truckee.

Napa Force Lacrosse is registering players through Dec. 1 for one of the Napa Valley’s fastest-growing sports.

The fourth-seeded Calistoga High boys soccer team saw its season with a 2-0 loss to No. 1 seed College Prep of Oakland in a North Coast Section Division 2 semifinal at St. Helena High on Wednesday.

Family and friends of Presley Anderson, the former Napa High, Indiana University and USC swim standout and mother of four who recently received the shocking news that she has Stage IV lung cancer, are hosting an event in Napa called “Fight on, Presley” Nov. 18-21 and Nov. 26 to help raise money to assist Anderson’s family with medical costs.

St. Helena High senior Cleo McClain finished first out of 31 varsity boys in the North Central League I at the cross country championships for…

Malia Gianelli of Napa had a successful day fishing in San Diego aboard the Polaris Supreme, reeling in this 175-pound blue fin tuna.

Natalie Murray traveled to Lake of the Woods in Canada with her father and landed this beautiful Northern Pike.