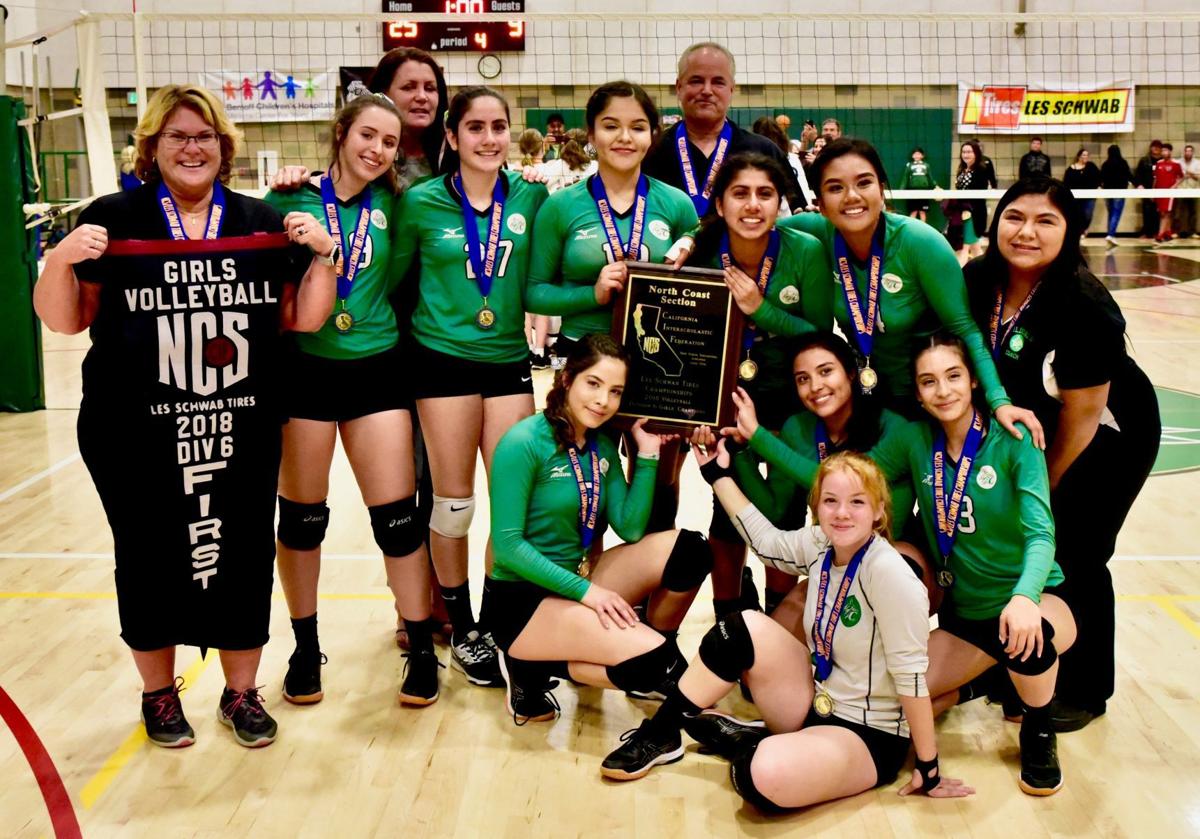 The Calistoga High volleyball team poses with its section championship pennant and plaque after a win over Jewish Community. 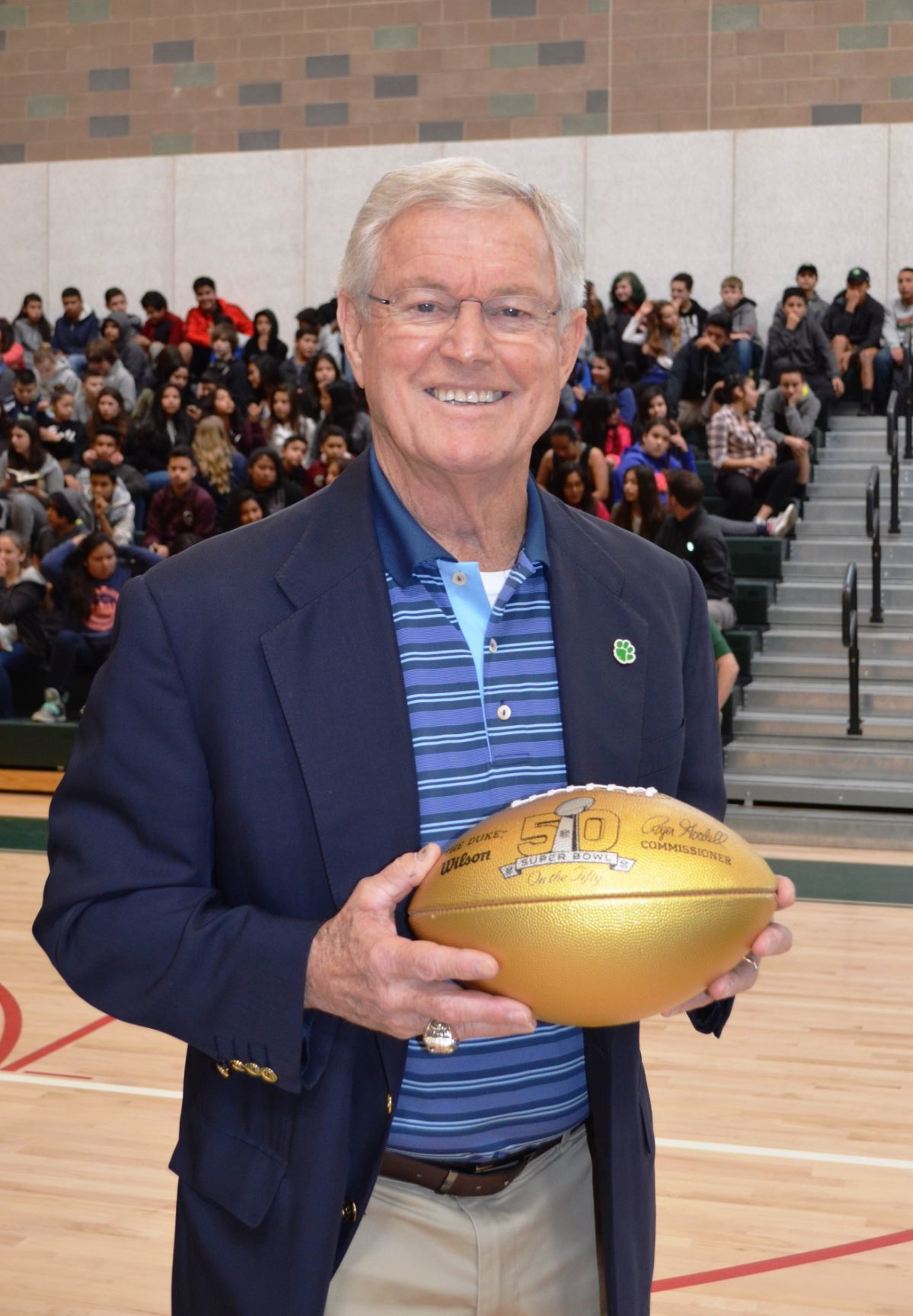 Legendary football coach and Calistoga native Dick Vermeil poses for a photo with a golden football commemorating his two Super Bowl appearances on Feb. 1, 2016, in the main gym at Calistoga High. 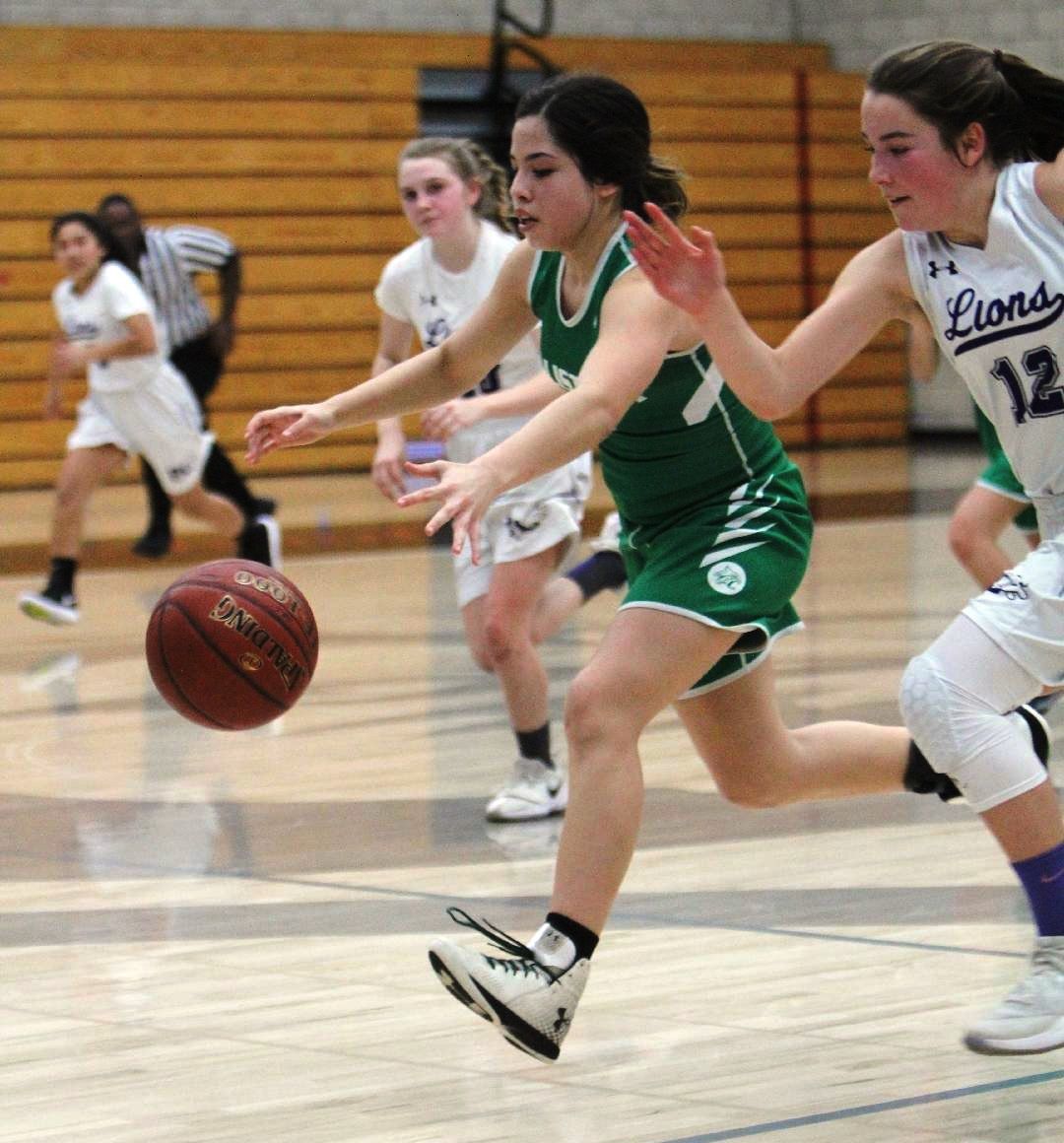 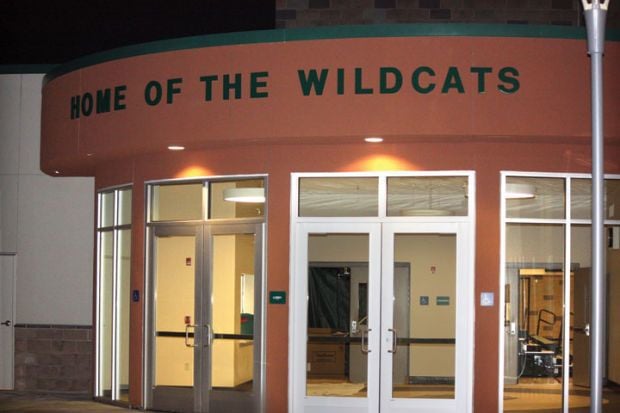 Calistoga High's large gym officially opened for use in 2014. 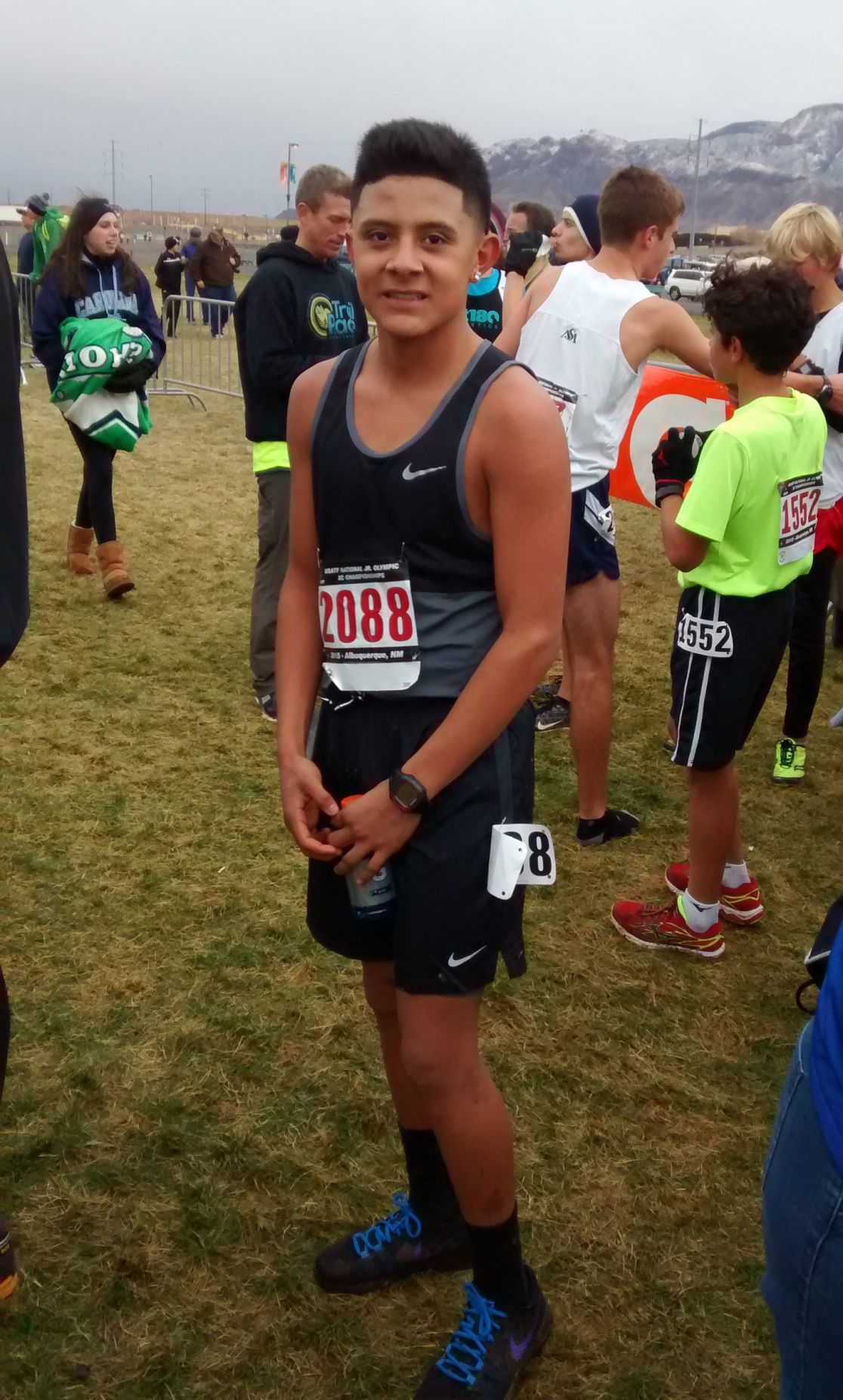 Jesus Rojas-Mendoza poses for a photo after finishing his race at the 2015 Junior Olympics cross country national championship at Balloon Fiesta Park in Albuquerque, New Mexico. 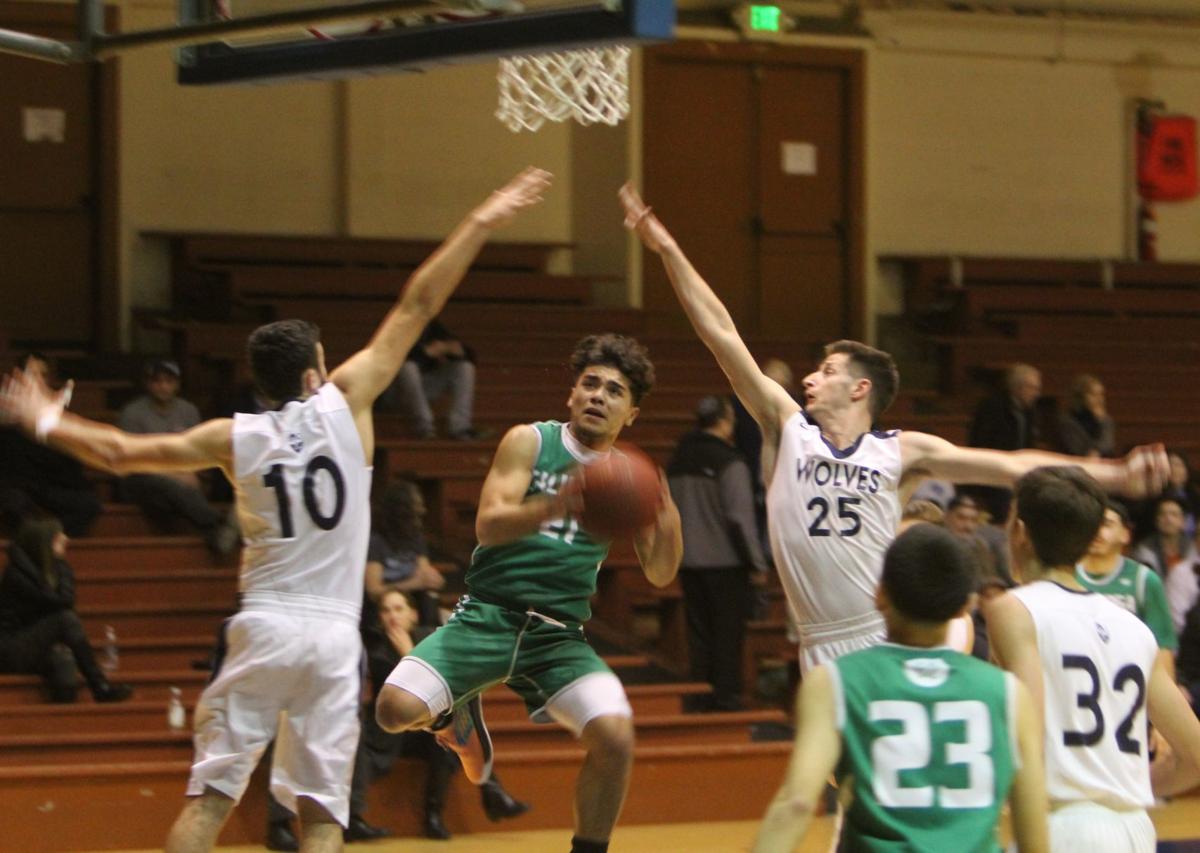 Calistoga's Christian Caldera (21) avoids Jewish Community defenders on his way to the rim during the 2018-19 Division 6 NCS playoff opener at Kezar Pavilion. 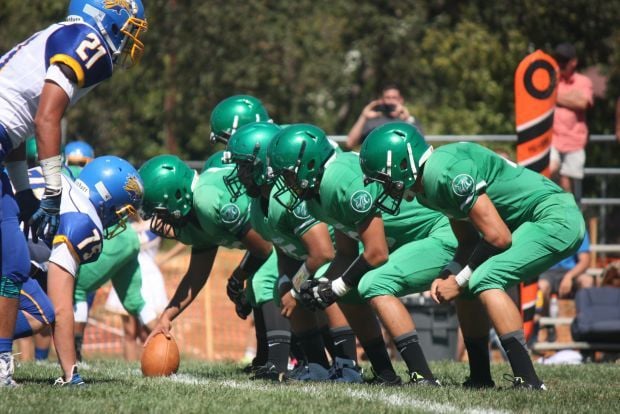 The Calistoga High football team played its first year an 8-man program in 2015.

Where has the time gone?

And as if picking the best sports stories from the last year wasn’t difficult enough, the Calistogan staff decided to go back and look at the most memorable stories from the past decade and tried to compile them as best we could.

Here’s what we thought were the most memorable sports stories from 2010 to 2019.

of the bestNicole Taylor, a 2011 Calistoga High graduate, closed out an impressive athletic career with a near-perfect pitching performance. The three-sport athlete led the varsity softball team to a league championship from the mound, threw nine shutouts with a .44 earned run average, struck out 174 batters and walked only 19.

Offensively, she also posted a .633 batting average with 39 runs batted in.

She was not only named the Napa County Pitcher of the Year but also the North Central League II-South Most Valuable Player. She also received the Calistoga Funke Blanket award and got a nod on the Cal-Hi Sports All-State softball team for small schools.

She was also a finalist for the All-Napa County Athlete of the Year for her exploits as a volleyball and basketball player.

2013: New gymIn 2012, the Calistoga Joint Unified School District continued its proposed 12-year renovation program, funded by $42 million worth of bonds approved by voters last fall and known as Measure A, by upgrading the school’s gymnasium.

Now simply called “the big gym,” the updated facilities were officially put to use for the first time in December 2013.

Had the Wildcats not had their 8-0 season spoiled by St. Vincent, 27-14, in their league finale, they would have also clinched their first undefeated season since 1986.

Calistoga went on to earn the 6 seed in the North Coast Section Division 7 playoffs but fell in the opening round to 3 seed Ferndale, 50-28, to finish the season 8-2, the most wins the program has had in a season all decade.

Mendoza, thanks an outpouring of support from the community, quickly raised the money he needed to make the trip .

Mendoza finished the 4K race in 14 minutes, 59 seconds, good for 84th place overall. He was also the 17th-best finisher from California.

moves to 8-manDue to shrinking numbers and an unstable league, the Calistoga football team went from playing 12-man football to 8-man.

Numerous other school that Calistoga now sees regularly made the change as well for similar reasons. The decision was officially made in December of 2014. The Wildcats went 6-2 their first year as an 8-man team in 2015 and have had a positive record every season since.

More than 2,000 high schools around the world received commemorative Wilson Golden Footballs for each player or coach who was on an active Super Bowl roster.

Calistoga received two. One was to honor legendary alum Dick Vermeil, who won a Super Bowl as head coach of the St. Louis Rams in 2000, and the other for his nephew Louie Giammona, who also played in the NFL.

Vermeil commemorated the arrival of the footballs on campus with a visit, delivering an impassioned and motivating speech to the student body during a rally.

down local sportsIn fall of 2017, regular life in Calistoga was brought to a standstill for weeks due to the deadly Tubbs Fire.

Even after the town was repopulated from a mandatory evacuation, air quality was poor and forced residents to take shelter indoors until the fires were put out. This also forced the cancellation of multiple prep football, volleyball and soccer game as well as cross country meets.

first girls section titleThe 2018 Calistoga volleyball team will go down as one of the best teams in Calistoga High history. The Wildcats made an underdog run to capture the Division 6 NCS volleyball title, the first section title for a girls sport in school history.

As the 8 seed in the playoffs, the Wildcats upset 1 seed Fremont Christian, 3-1, and 4 seed St. Bernard’s, 3-1, on the road before defeating 10 seed Jewish Community, 3-1, in front a capacity crowd at Calistoga High.

2019: Girls basketball makes NorCalsComing on the heels of the volleyball team’s Cinderella run to a section title, the Calistoga girls basketball team also went on the deepest postseason run in program history.

With a roster of most of the same players from volleyball, the Wildcats went 15-12 overall and were named the 5 seed for the NCS playoffs, beating 13 seed Mendocino, 51-41, in their opener then rallying to defeat 4 seed El Sobrante Christian, 57-52, on the road to reach the semifinals.

Reaching the semis earned them a trip to the NorCal playoffs for the first time ever.

2019: Boys basketball breaks 12-year playoff droughtWhile the girls put together their best season in program history, the boys also had their most successful season on the hardwood in recent memory.

They snapped a 12-year playoff drought, going 11-15 overall and earning the 15 seed in the NCS playoffs.

While they too were dealt a first-round exit, falling to 2 seed Jewish Community, 65-19, coaches and players on the team felt that reaching the playoffs would inject some much-needed energy back into the program.

Prep sports in the Napa Valley this past year provided some incredible stories I was honored to tell. Here are some I thought stood out from t…

Here are the Top 10 Weekly Calistogan Sports Stories of 2019, as picked by Sports Editor Gus Morris.

Napa Valley Register's Top 10 Sports Stories of the 2010-2019: Decade of big stories both good and bad

Tickets for the 11th annual Soup-er Bowl to benefit the Calistoga Art Center go on sale at noon, Monday, Jan. 6.

Upcoming events in Calistoga and Napa Valley the week of Jan. 9.

The Boys & Girl's Club of Calistoga and St. Helena will announce the Youth of the Year on Thursday.

When is the right time to look back on a decade?

I am one of those grumpy old purists who likes to point out that decades, centuries and millennia end on the “0” years, not on the "9"s.

Calistogans comment on what they are looking forward to in the year 2020.

The results of the 2019 Calistoga Community Survey show residents are concernced about affordable housing, water rates, and road conditions.

It's your chance to taste haggis, tatties and peeps at NapaShakes' celebration of Robert Burns.

A memorial for the late Jim Caudill, a wine industry marketing and public relations professional, will be held Saturday at the St. Helena United Methodist Church.

Diane Dillon, the new chairperson of the Napa County Board of Supervisors, will focus on climate change.

Due to an issue withe the Speedway, Napa County has agreed to another extension of due diligence in the sale of the Napa County Fairgrounds to the City of Calistoga.

Girls on the Run Napa & Solano is looking for volunteers to inspire girls to boldly pursue their dreams and live happy, healthy lives.

The Calistoga High volleyball team poses with its section championship pennant and plaque after a win over Jewish Community.

Legendary football coach and Calistoga native Dick Vermeil poses for a photo with a golden football commemorating his two Super Bowl appearances on Feb. 1, 2016, in the main gym at Calistoga High.

Calistoga High's large gym officially opened for use in 2014.

Jesus Rojas-Mendoza poses for a photo after finishing his race at the 2015 Junior Olympics cross country national championship at Balloon Fiesta Park in Albuquerque, New Mexico.

Calistoga's Christian Caldera (21) avoids Jewish Community defenders on his way to the rim during the 2018-19 Division 6 NCS playoff opener at Kezar Pavilion.

The Calistoga High football team played its first year an 8-man program in 2015.