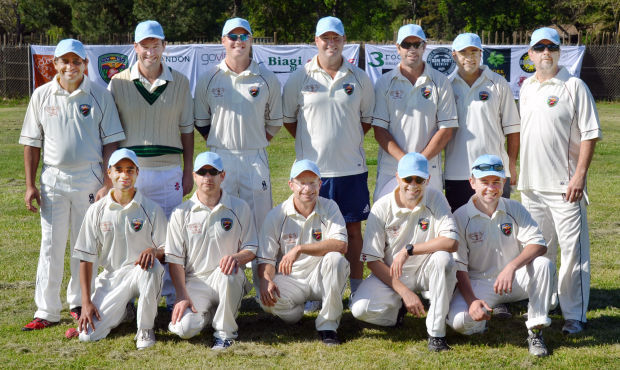 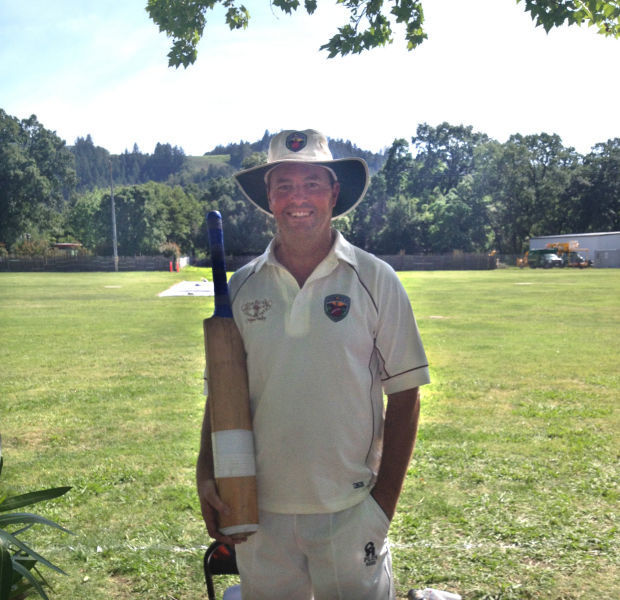 Rest of the World captain Bill Nancarrow plays the wicket-keeper position and opens the batting for the World Series of Cricket's defending champions. 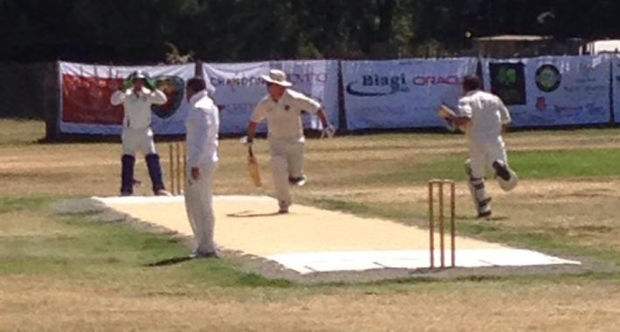 America/Australia captain Rob Bolch, with bat during a 2014 game, hopes to see his team win its third World Series of Cricket games in four years on Saturday.

The Napa Valley Cricket Club will kick off its 2015 season with the annual World Series of Cricket game at 10 a.m. Saturday, April 18 at the Napa County Fairgrounds in Calistoga.

As always, the game should be hotly contested as the American/Australian team of NVCC members look to wrestle the trophy back from the Rest of the World team, which won convincingly in 2014.

Cricket is the second-most popular sport in the world – it is played in over 100 countries worldwide – and the NVCC is a firmly established member of that community.

Both of the teams’ captains took time out to share some of their background and their thoughts on who might win this weekend.

Bill Nancarrow, who moved to St. Helena in 2003 from the North Island of New Zealand to work at Duckhorn Wine Company, is the captain of the Rest of the World team.

He recalls playing “backyard” cricket as a 4-year old as his earliest cricketing memory. His favorite cricketing moment goes back to 1978, when his native New Zealand beat England in a test (five-day) match. He said more Americans should get involved in cricket.

“It’s a great game of strategy, statistics and skill that provides great social and entertainment opportunities for spectators,” he said. “I think these are all things that appeal to the American sports fan.”

Asked about the result on Saturday, he expects “it will be close, very close.”

Nancarrow, who captains the team from the wicket-keeper position, also opens the batting for the ROW team and has made some high scores while playing for the club over the last couple of seasons.

He said his fielding position of wicket-keeper is similar to that of a catcher in baseball.

“I wear padded gloves and my goal is to make ‘out’ plays by catching the ball from a hit or collecting throws from the fielders and getting a run-out,” he explained. “I also help the bowlers (pitchers) strategize for the different batsmen and game situation.”

Nancarrow is looking forward to the family element of the World Series game of Saturday as the NVCC will be providing plenty of activities for kids, including a bouncy house and a kids game during the mid-innings (halftime) break. He said he tries to play cricket at home with his two kids, who enjoy a “backyard” game every now and again.

The American/Australian team will be captained this year by Rob Bolch, who is also NVCC’s club captain. Bolch hails from the town of Clyde in Victoria, Australia and has lived in the Napa Valley since 2005, working in various facets of the wine industry.

Having won the first two World Series games in 2012 and 2013, Bolch looks forward to winning the trophy back in what he says will be a close game.

“We have a strong base of members as we head into our fourth season and I think this will benefit both teams,” he said. “But, and I’m biased, I think the AA team will sneak the win by four wickets.”

That means Bolch is guessing that the AA team will bat second and surpass the ROW score while still having four of their players who are available to bat.

Bolch has played cricket all his life. He shared memories of playing in the front paddock at home his version of “test cricket” with his three sisters and their cousins. He recalls how those games would seem to go on “all summer long.”

Bolch’s earliest memories of seeing cricket at the top level stretches back to 1981, when Australia played the West Indies – a team made up of players from a number of Caribbean countries – at the hallowed Melbourne Cricket Ground. Both teams of that era were made up of players now considered cricketing legends, and Bolch recalls the experience fondly.

On the topic of Americans taking up cricket, Bolch points to its popularity around the globe.

“Given that it’s the world’s second biggest sport after soccer, how can the USA not take it seriously? It’s full of great traditions, lots of strategy, and more recently has become a very fast-paced game in the T20 format,” he said of playing only 20 overs, similar to innings, of six balls each. “I think this shorter format will suit the American preference for a three-hour game versus one that lasts several hours or days.

“In addition to that, as a result of the baseball tradition, Americans have great arms, so their fielding is always very impressive when they make the transition to cricket. We now have four American members and we are always looking for new converts to the cause.”

Rest of the World captain Bill Nancarrow plays the wicket-keeper position and opens the batting for the World Series of Cricket's defending champions.

America/Australia captain Rob Bolch, with bat during a 2014 game, hopes to see his team win its third World Series of Cricket games in four years on Saturday.