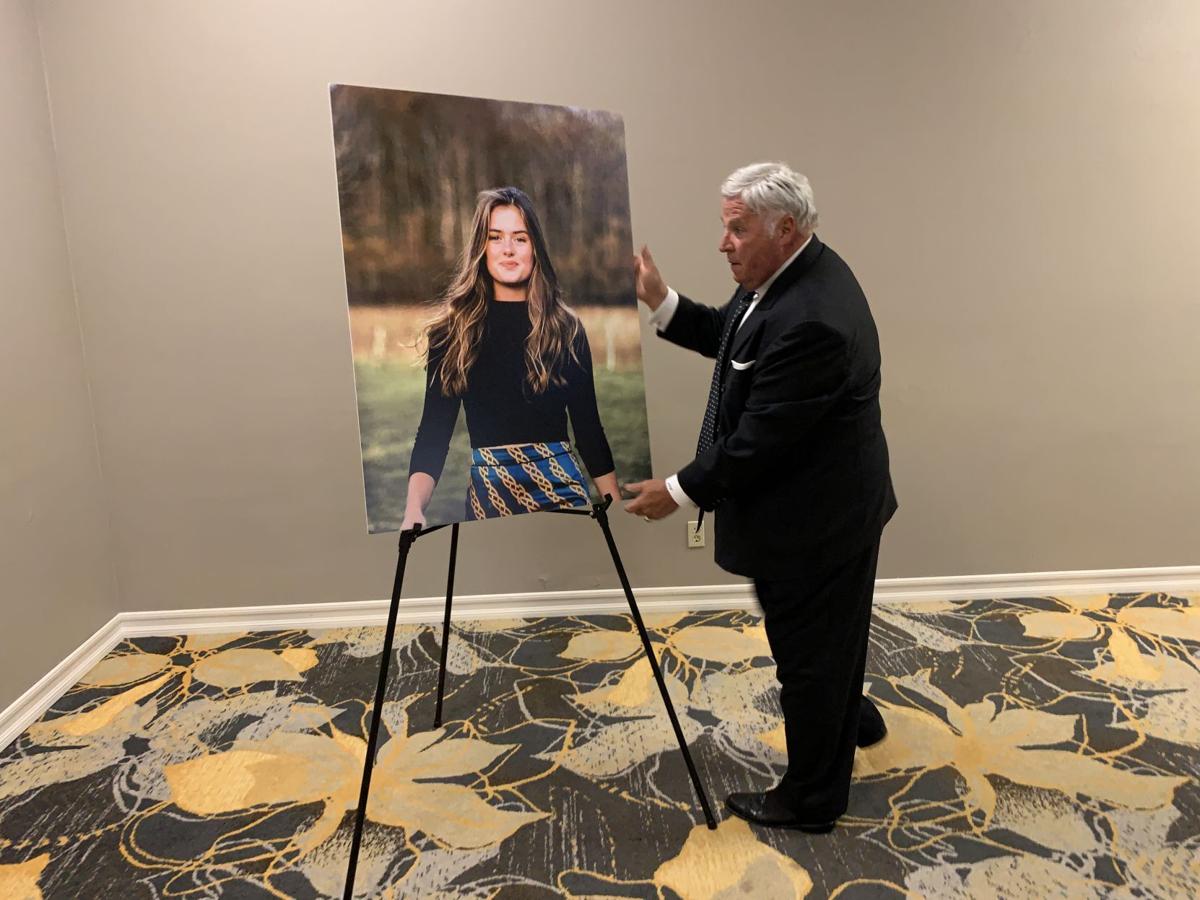 Attorney Matt Bishop displays a photo of Michaella "Meme" Hanifan. The teenager was killed in an auto accident near Silverado Resort in June 2019. The family has filed a wrongful death complaint against Silverado, a former resort manager and others. 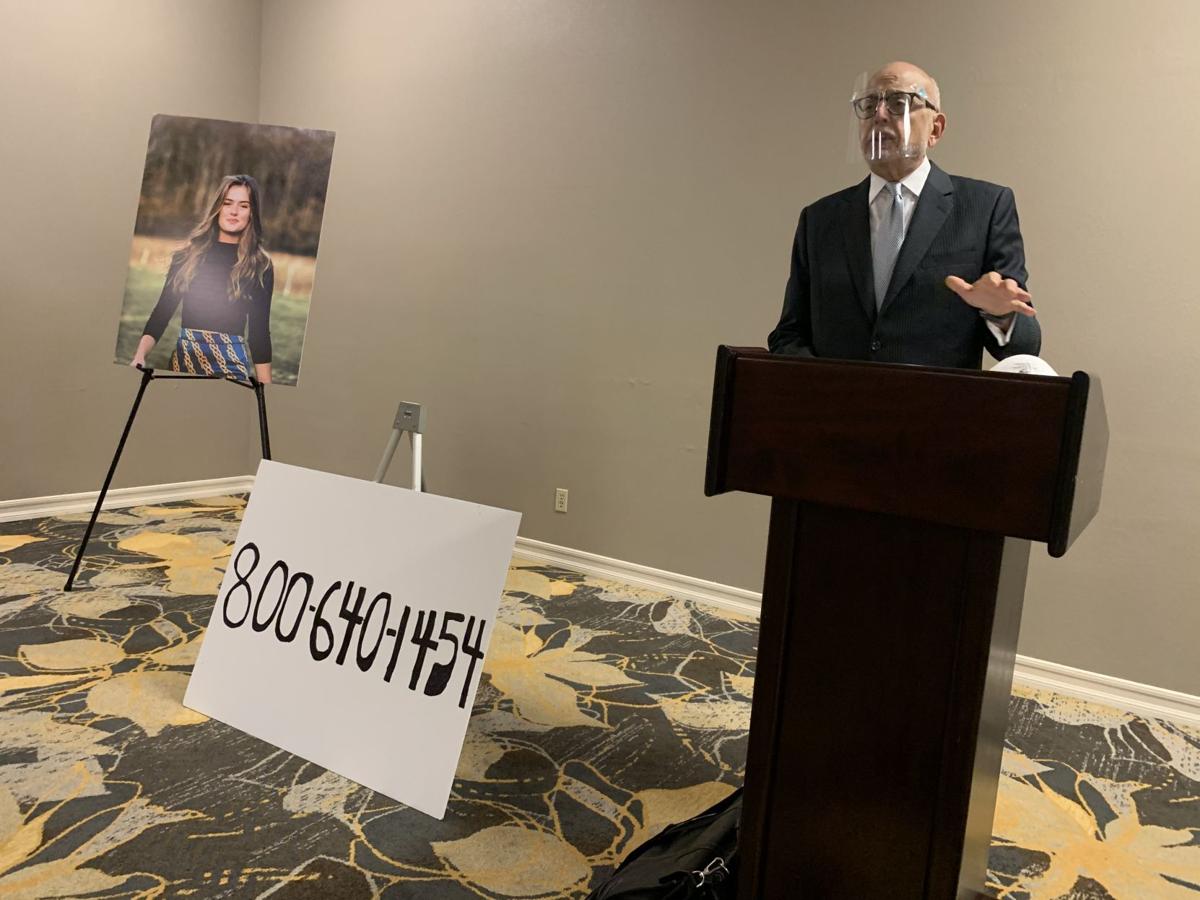 Attorney Daniel Russo at a Friday news conference about Michaella "Meme" Hanifan. The teenager was killed in an auto accident near Silverado Resort in June 2019. Attorneys are publicizing an 800 number, seeking others who may have information about the resort's management. 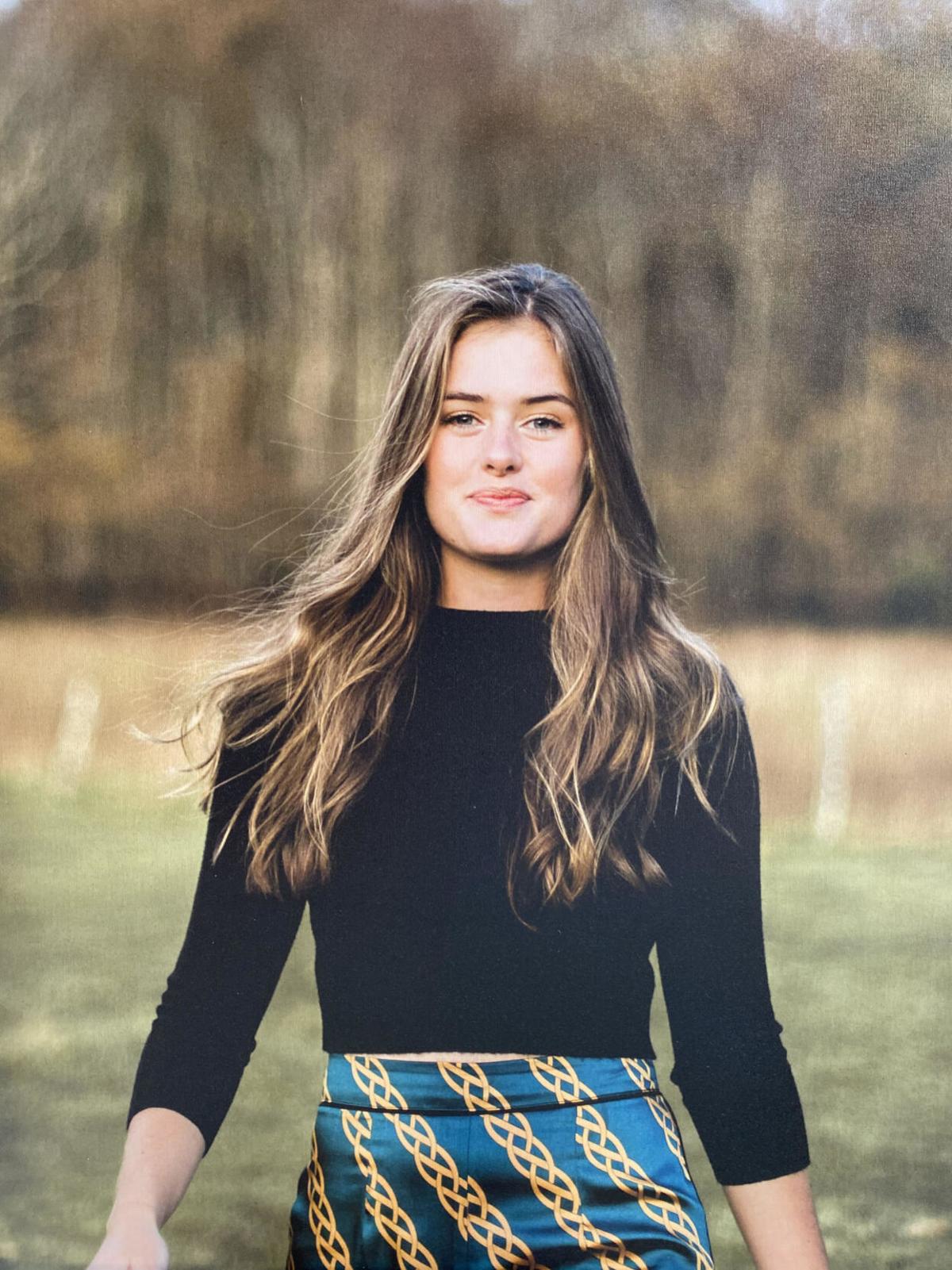 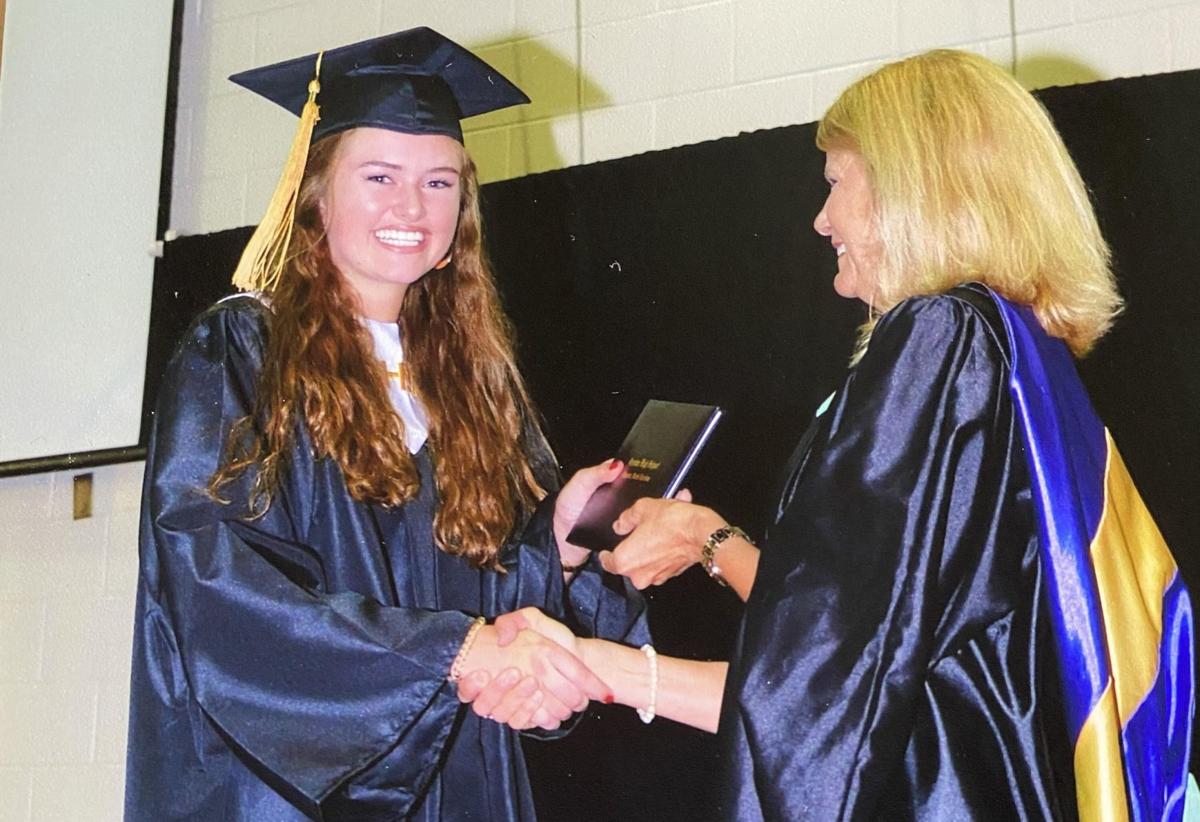 Michaella "Meme" Hanifan at her high school graduation. The teenager was killed in an auto accident in June 2019 near Silverado Resort. The family has filed a wrongful death complaint against Silverado, a former resort manager and others. 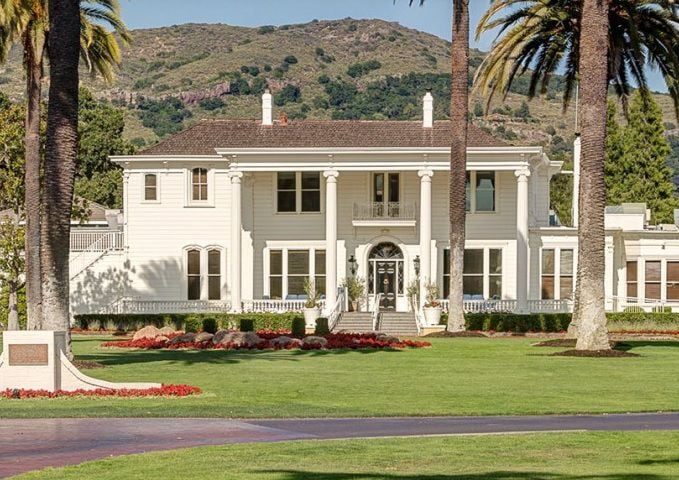 The parents of Michaella Hanifan, a young woman killed in a car crash at Silverado Resort and Spa in June 2019, have filed a wrongful death complaint against the resort and others involved with the property.

In a separate “demand” letter sent to the defendants’ attorneys before the complaint was filed, the Hanifan’s attorneys said that Gonzalez used the resort as his own “sexual hunting preserve” to bring young women to the property to supply them with free drinks, meals and hotel stays for “one night stands” and “hookups.”

Resort management knew what Gonzalez was doing, but did nothing to stop him, the complaint alleges. Gonzalez’ behavior and the alcohol he provided led to the wrongful death of their daughter, said the complaint.

Michaella’s parents, Gerald and Jennifer Hanifan, are asking for economic compensation for their daughter’s loss of life in the amount of $1.7 million to $2.4 million, plus punitive damages.

Attorneys for Gonzalez and the other defendants named in the suit could not be immediately reached to comment for this story. An attorney for Wyndham hotels declined to comment.

Sisters Michaella (known as Meme) and Finnuala Hanifan, ages 18 and 21, flew to San Francisco on June 22, 2019 to celebrate Meme’s graduation from high school.

Meme was about to start college and Finn, as she was known, was continuing her college education. The two are from North Carolina, and had never been to San Francisco before, according to Matt Bishop, one of the family’s attorneys.

Finn knew Gonzalez, age 59 at the time, via Instagram, said Bishop. While in the city they met in person where Finn and Gonzalez went out to dinner and “clubbing.” Gonzalez then invited the two sisters to come to the Napa Valley resort, he said.

On June 23, the sisters checked into the hotel, where Gonzalez gave them a free room with champagne, according to the letter.

The letter alleges that Gonzalez had a key to their room, #406, and used it at least once.

That night, the three went to downtown Napa for a meal and drinks. After returning to the resort, the sisters borrowed Gonzalez’ Porsche, the suit contends.

With Gonzalez’ help, Finn got behind the wheel with Meme in the passenger seat, according to the suit.

In January, Finn was charged by the Napa County District Attorney with felony gross vehicular manslaughter while intoxicated, DUI and other related charges. More than three hours after the crash, her blood alcohol level was .057%. Finn’s criminal case continues.

Gonzalez was not criminally charged.

Attorneys for the family said that the sisters were victims of Gonzalez, a man who used the resort as a “feeder system” for encounters with young women while resort executives looked the other way.

According to the civil complaint, filed in Napa Superior Court on Thursday, the defendants have “obvious and indefensible legal liability” for the death of Meme.

Alcohol had been delivered to their room, yet no one from the resort stopped them from getting into Gonzalez’ Porsche on the night of June 23, 2019.

During an interview 16 days after the accident, Gonzalez confirmed his romantic involvements and trysts, according to the letter from the attorneys.

Gonzalez told the Napa District Attorney’s office that he had been married (three times) and “was not looking for a committed relationship, but rather many short relationships with young girls for a good time,” and then to part ways.

According to attorneys for the Hanifan family, Gonzalez’ “rakish pursuit of young women eventually became a workplace obsession,” well known to co-workers and resort General Manager John Evans. The resort allowed Gonzalez to “score,” as Gonzalez put it.

The letter states that Gonzalez was commonly observed flirting with guests “but more aggressive and dissolute female pursuits occurred at nighttime.” Employees said Gonzalez would walk around the resort “flirting with young women (who) would fall victim to Adrian’s trap.”

He regularly entertained female guests, putting the costs on co-owner Tim Wall’s account or his expense account. Some employees claim he ordered and then served drinks to women under 21, according to the letter.

“He was allowed to provide alcohol without any expense” to himself, said attorney Russo.

Despite Evans being notified of Gonzalez’ “Don Juan” behavior, “nothing was done to rein in Gonzalez,” said the attorneys.

On the night of Meme’s death, champagne had been sent to the room that Gonzalez obtained for the young women, alleges the letter, citing accounts by resort staff. Finn had two alcoholic drinks that afternoon at the resort pool and that evening the three dined at Gran Eléctrica in Napa.

Reports noted that while at Gran Eléctrica, Gonzalez had three beers and a shot of Mescal. Finn reportedly had five Mojitos.

According to the complaint, Meme drank a “spiked hot chocolate” and took sips of her sister’s alcohol “when she thought nobody was looking.” They left the restaurant about 10:15 p.m.

Back at the resort, Gonzalez reportedly gave the sisters white wine.

The complaint said Finn was “visibly intoxicated” and in a state of high suggestibility.

Gonzalez was then seen with the sisters next to his Porsche parked near the Silverado Mansion, according to the letter.

Silverado Sous Chef Nick Williams said he saw the sisters in the car and that they seemed excited to be taking the Porsche for a drive.

Gonzalez reportedly fastened Finn’s seat belt and helped her adjust her seat. Meme was also wearing her seat belt, according to the CHP.

Around 10:45 p.m., Finn drove away quickly. Williams said he then heard the engine racing, a tire screech and then a loud crash.

The car left the west edge of the roadway, crashed into a culvert, then continued south, striking two wooden poles and a traffic signal.

The car overturned and came to rest on the west shoulder of Atlas Peak Road in front of the resort, the CHP said.

Williams said he saw the Porsche flipping into the air and then hitting a power pole. The car was on fire so Williams ran to get a fire extinguisher.

Both women were pulled from the car, but Meme was not moving.

Finn was taken by ambulance to Queen of the Valley Medical Center and later airlifted to Kaiser Vacaville. Meme was pronounced dead at the scene.

As of Aug. 9, 2019, Gonzalez no longer worked for Silverado Resort and Spa, said the complaint. Bishop said the attorneys believe he may be in Mexico.

Speaking for the family

On Friday morning at the Embassy Suites in Napa, Russo and Bishop held a news conference to announce the complaint.

Bishop put two large pictures of Meme on display. The first was a senior portrait.

The second was Meme after she died.

In the photo, the teenager’s body is shown on a stretcher on the grass near the resort. She is wearing jeans and a black top. Her toenails are painted light blue.

That’s Meme, “before and after Adrian,” said Bishop.

The death of their daughter “has torn a hole in” and “devastated” their family, Russo said of the Hanifans. “This should have never have happened.”

At the conference, the attorneys also posted a sign with a toll-free number printed on it. They suspect there are other possible victims that Gonzalez had encounters with. “We know there are other women out there,” said Russo.

“I don’t think a leopard changes his spots,” said Russo. “We want to make sure this doesn’t happen to someone else.”

Bishop said he anticipates that the defendants will claim that Meme’s death is Finn’s fault. After all, she was driving the car that crashed.

“Of course she bears some responsibility but she’s 21 and here’s a 59-year-old guy feeding her alcohol,” he said.

A case management conference for the complaint is scheduled for Feb. 10, 2021.

Watch now: how to navigate flu season during the COVID-19 pandemic

American Canyon fire chief retires; search on for his successor

Two experienced fire professionals are running the department in the interim.

If things keep up, Napa County could move from red to orange on the state rankings, allowing greater business opening.

Critical fire weather is expected in Napa and surrounding areas from Saturday night into Monday, the National Weather Service said.

Attorney Matt Bishop displays a photo of Michaella "Meme" Hanifan. The teenager was killed in an auto accident near Silverado Resort in June 2019. The family has filed a wrongful death complaint against Silverado, a former resort manager and others.

Attorney Daniel Russo at a Friday news conference about Michaella "Meme" Hanifan. The teenager was killed in an auto accident near Silverado Resort in June 2019. Attorneys are publicizing an 800 number, seeking others who may have information about the resort's management.

Michaella "Meme" Hanifan at her high school graduation. The teenager was killed in an auto accident in June 2019 near Silverado Resort. The family has filed a wrongful death complaint against Silverado, a former resort manager and others.