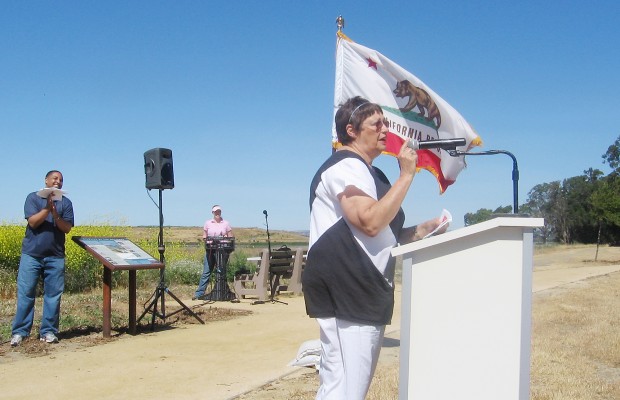 City Councilwoman Joan Bennett speaks at Saturday’s grand opening of the Napa River and Bay Trail. “Rome was not built in a day, and American Canyon has only been going since 1992,” Bennett said. Scott Hankins photo 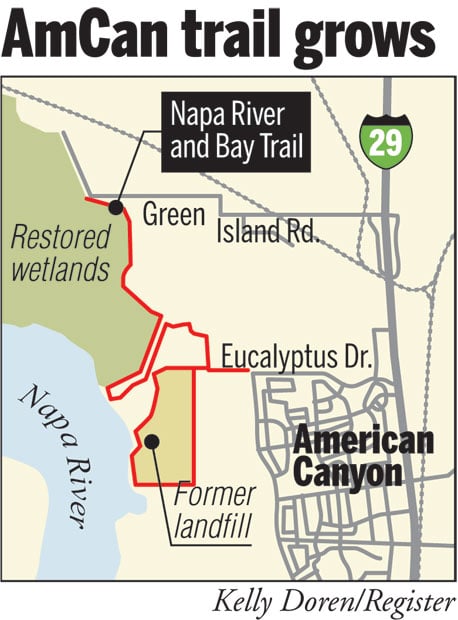 AMERICAN CANYON — About 50 people, including U.S. Rep. Mike Thompson, enjoyed perfect weather at the grand opening of American Canyon segments of the Napa River and Bay Trail on Saturday.

The festivities were held at the trailhead at the wetlands viewing area at Wetlands Edge Road and Eucalyptus Drive.

Several Napa County, American Canyon and Department of Fish and Game officials dedicated the 2.1-mile stretch of river trail and a 1.8-mile loop trail around the city’s old landfill. The loop trail was named in honor of Thompson.

The river trail, built with funds from state Fish and Game and other government grants, leads to new wetlands near the end of Green Island Road that were formerly commercial salt ponds.

“What do you do with an old landfill?” American Canyon Mayor Leon Garcia asked. “The community comes up with some creative ideas.”

American Canyon City Councilman Mark Joseph provided some of the history of the wetlands, noting that a $3.2 million grant in the 1990s allowed the city to buy some 460 acres that includes wetlands and the Clark Ranch property.

Cooperation between the city and Fish and Game led to the restoration of more than 2,000 acres of open space, Joseph said.

“It’s a good example of how competing and sometimes mutually exclusive interests can benefit from working together,” he said.

“For example, we’ve already talked about all of the recreational assets and opportunities. But it’s also an excellent habitat for endangered species, such as the saltwater marsh mouse. Also, because of the wetlands and upland areas, it’s an excellent opportunity for hunting and other outdoor activities.”

“When I first came to American Canyon, the landfill was a gesture of how we are not being treated well,” he recalled. “Here we are, the home of a dump and junkyards. So it’s ironic that now we can say that this is ground zero for recreation.”

Joseph said the landfill would soon contribute to alternative energy with solar panels. For more than a decade, the former dump has been generating electricity by burning methane produced by decaying trash.

AmCan City Councilwoman Joan Bennett said one man, Barry Christian, was responsible for getting the ball rolling on river access.

Christian wanted a place to take his kayak to the river, Bennett said. He pored over documents, chided council members and county officials, until he happened on an old easement. The trail became a city priority.

“Rome was not built in a day, and American Canyon has only been going since 1992,” Bennett said.

“The idea of a loop trail around the landfill started

40 years ago,” said Myrna Abramowicz, a director with Napa County’s open space district. “That was forgotten until Barry Christian found it and started talking about it to anybody who would listen.

“The federal dollars made it possible to get a million-dollar state grant to build a trail,” she said.

“Mike is an avid fisherman, an avid hunter,” Ramos Bennett said. “He loves open spaces. He has made it his lifelong mission, through his 22 years of public service, to make sure that he is working toward preservation of open space and to assure public access to open space.”

“I’m really honored to have a loop trail named after me,” Thompson said. “There was some criticism. Some of the key people in Napa were critical. They said some things that I thought were kind of mean. They said, well, you know, it’s a trail around a garbage dump.

“That’s not right,” he said. “This is actually a good thing for American Canyon. It promotes recreation.”

City Councilwoman Joan Bennett speaks at Saturday’s grand opening of the Napa River and Bay Trail. “Rome was not built in a day, and American Canyon has only been going since 1992,” Bennett said. Scott Hankins photo