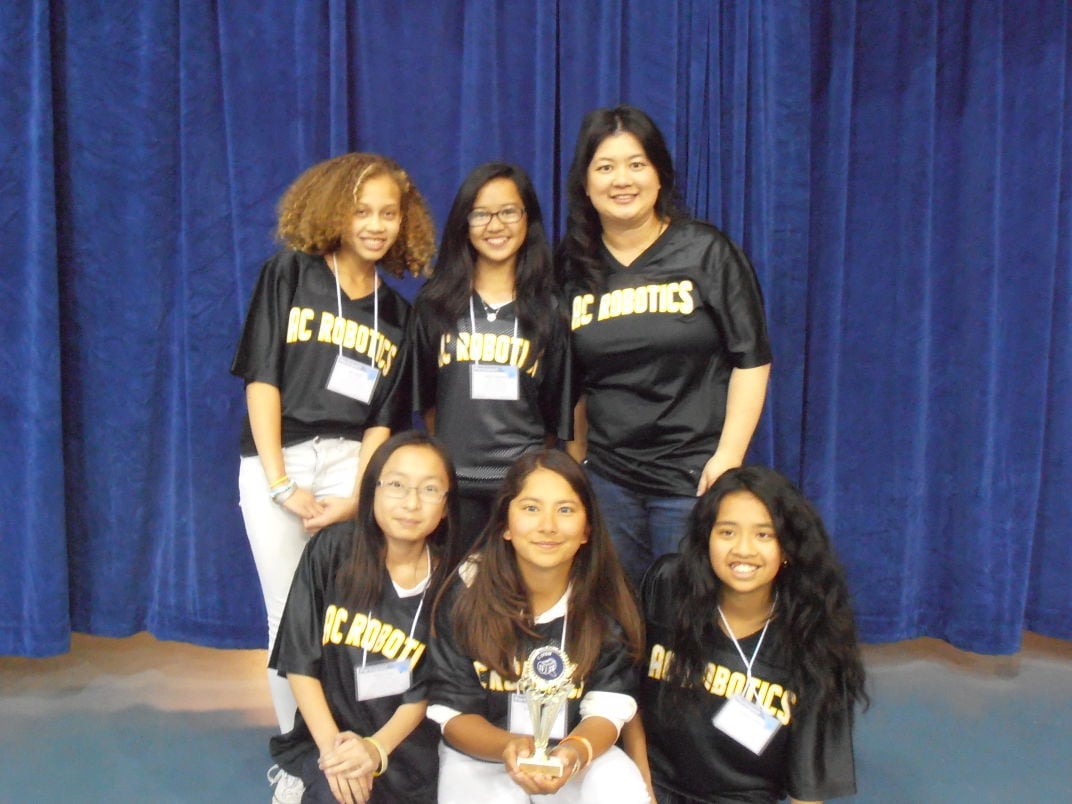 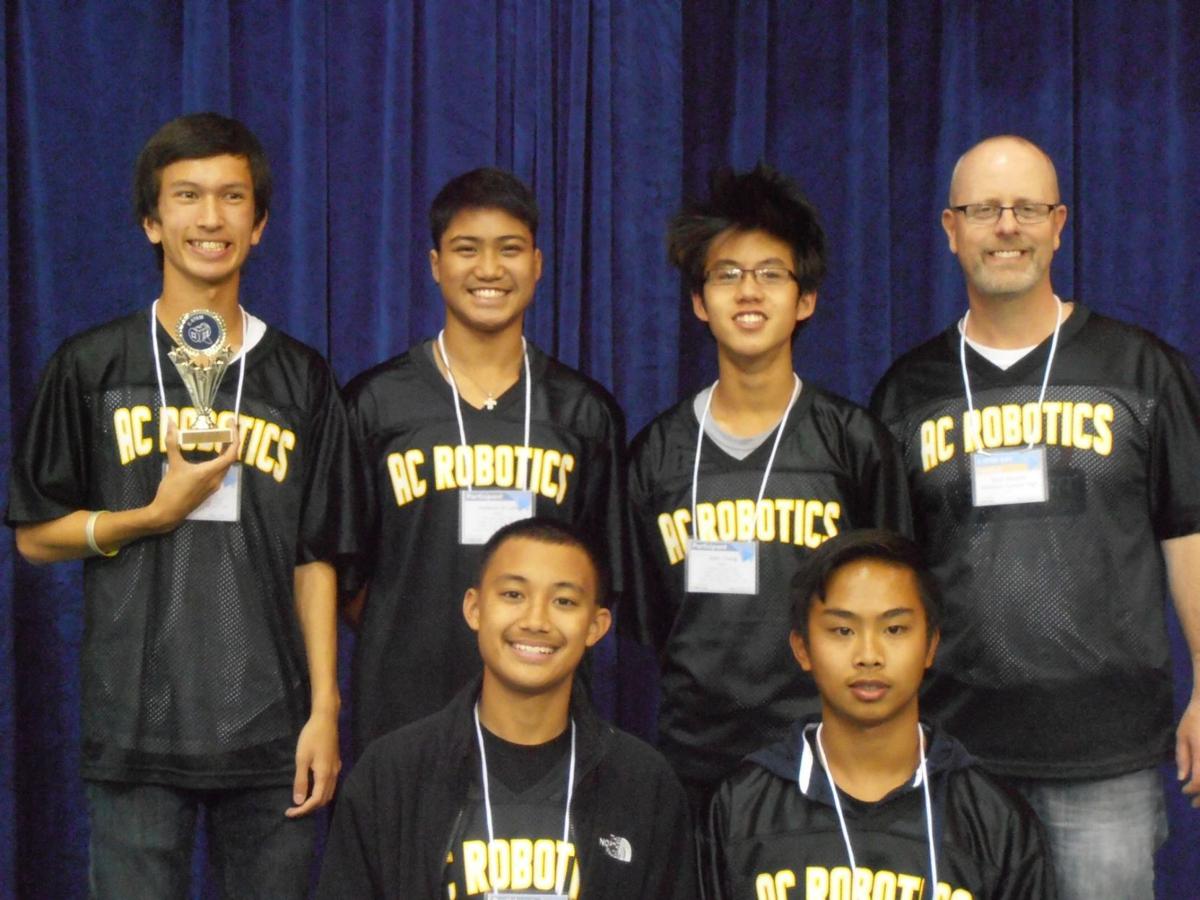 American Canyon high school and middle school students have so enjoyed working with robotics that they sometimes don’t realize that they’re also learning mathematics in the process.

This kind of learning has delighted educators and parents, particularly with respect to young girls, who often struggle or lose interest in math and science once they reach middle school.

“What kid is not going to like playing with robotics,” said American Canyon Middle School Principal Dan Scudero. “They don’t always realize they’re learning math at the same time initially. Later on they realize, ‘Oh, I’m learning math,’ and having fun, which is what it should be.”

The addition of robotics excited many students at ACMS, including sophomore Sara Jahangiri and freshman Katrina Cole, both of whom are now at American Canyon High School.

“It’s just a great experience,” said Jahangiri. “The main reason I do it is because of the team. I play sports but robotics is always a team I can depend on. We work well together, and we learn together.”

Cole said she enjoyed math before working with Linkbots, but also admitted the subject was challenging for her at times when she was younger.

But “when we were able to incorporate robots in it, it helped you pick up on the topics quicker” in math classes, she said.

Her mother, Melissa Cole, has seen nothing but good things come of her daughter’s participation in robotics.

“She has grown with it [the program],” said Melissa Cole outside ACHS teacher Scott Marsden’s classroom, where high school robotics has steadily grown the past two years.

When Katrina was in seventh grade and preparing to attend UC Davis’ C-STEM Day, a type of Super Bowl for Linkbot students, her mother remarked how good the activity was for her math skills.

Katrina insisted to her mother that she wasn’t employing math.

“It was so much fun for her,” said mom, echoing Principal Scudero’s words, “she didn’t even realize she was using math.”

“When she talks about it [robotics], she’s speaking a whole other language,” her mother added. “She speaks code, and I don’t understand one bit of it.”

The program has been good for Katrina in other ways.

“She has become a lot more confident in it [robotics],” Melissa Cole said. “As the years have progressed, she’s understanding what she is doing and knows how to resolve a problem when she sees it on the board.”

“This program has definitely kept her more involved in math,” she added.

“You can see it in the research over and over again,” said Scudero. “Girls fall out of math at the middle school level, and science too.”

“It’s a weird societal thing we gotta break,” he added. “They’re just becoming teenagers, they’re trying to figure out who they are, and if you look at the media, until recently there haven’t been a lot of positive images of women in mathematical fields or scientific fields.”

The goal is to instill in all young girls that “it’s OK to be a brainiac,” he said. “It’s a good thing.”

That feeling is shared by officials at the Center for Integrated Computing and STEM [Science, Technology, Engineering, and Mathematics] Education at UC Davis, which has been pushing for K-12 schools to blend robotics with math curriculum.

“Our goal is to get kids from first grade to twelfth interested in math and robotics,” said Assistant Director Calvin Chen.

Giving students “something tangible, a robot they can play with,” motivates them to learn the math and programming behind making the technology operate.

“It’s not all abstract,” said Chen, referring to the traditional model of teaching math exclusively out of a textbook.

The Center for Integrated Computing and STEM Education is also emphasizing math/robotics for teen girls. It runs a summer camp at UC Davis for them — one for boys is coming soon, too — and it has helped school districts in Benicia and Mount Diablo start their own camps as well.

The Center hosts the annual C-STEM Day competition, in which student teams from high schools and middle schools throughout California spend an entire day programming Linkbots.

American Canyon students have made an impression at the competition, winning awards the last three years, including an ACMS team that place first in the state in 2015.

“They did really well,” said Chen about this year’s teams from ACHS and ACMS. “They were by far the most represented [school] district at the event.”

“At the awards ceremony they were doing cheers and chants,” Chen said. “Everybody else was [claps his hands], you just heard clapping” from the other schools.

But the American Canyon students behaved as if they were at a football rally. “They were cheering AC!” said Chen. “It was like a sports event.”

He said the enthusiasm “was good. I think it motivated some of the other kids [from other districts]” to do more next year, according to Chen.

Chen was complimentary of Lee and Marsden for working so well together and building a “pipeline” between the middle school and high school for robotics.

Marsden agreed, saying: “The strength of our AC Robotics team, and what distinguishes us from other schools is that we have a strong middle-high school collaboration that allows students to transition from middle school robotics to high school robotics.”

“We also have an amazing parent support network that is unmatched by any of the other schools in Northern California who were competing at C-STEM Day,” he said.