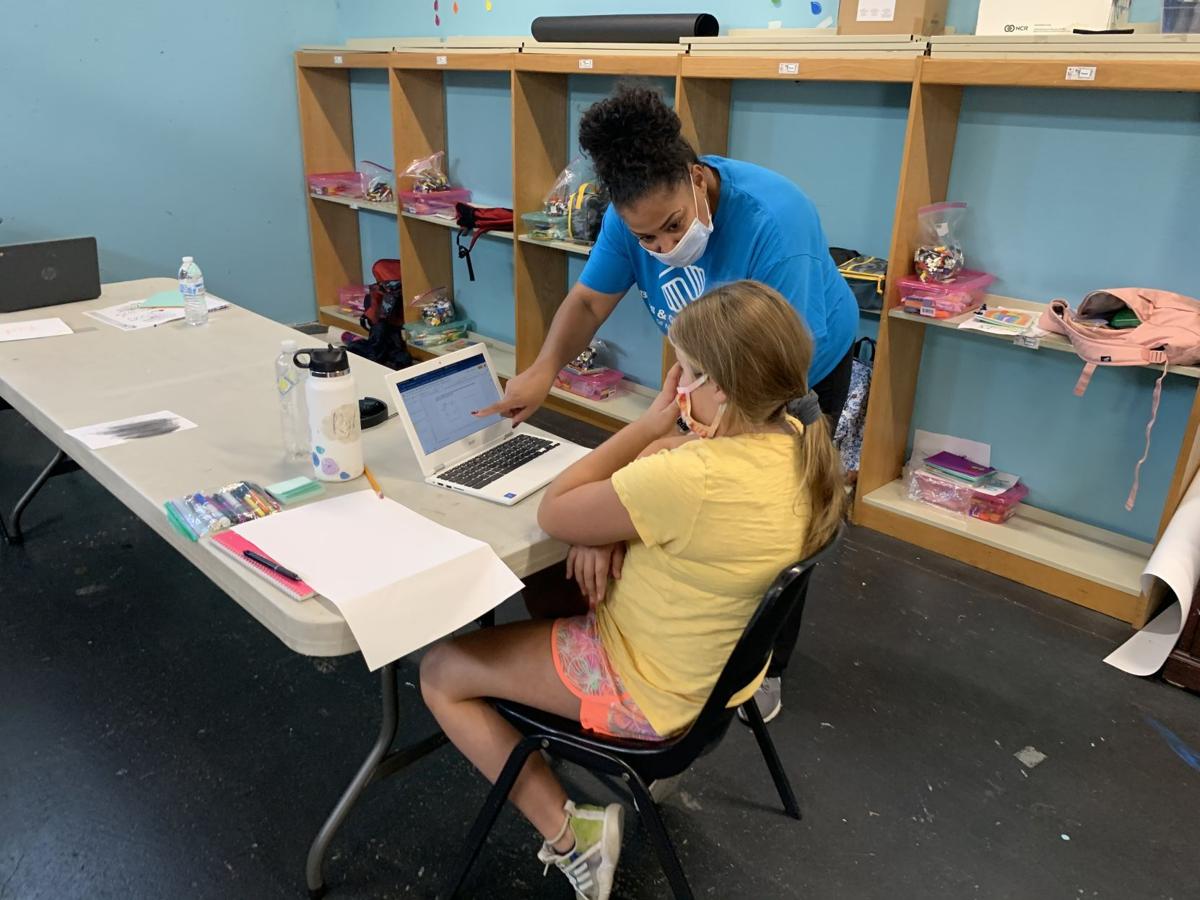 A student at the Boys & Girls Clubs of Napa Valley works on her distance learning school work while at the club last week. The club is looking to create additional space to try and accommodate demand from essential workers, like farmworkers, and other residents. 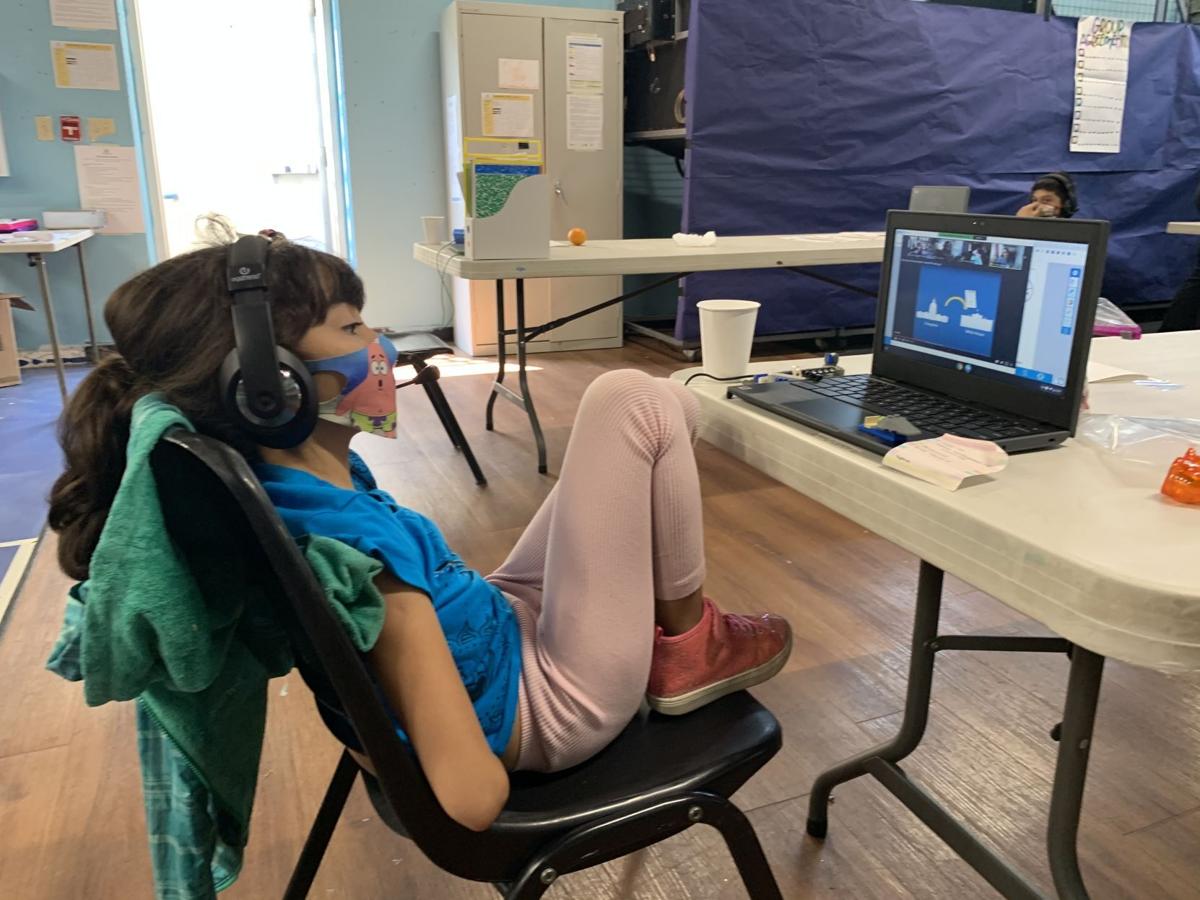 A student at the Boys & Girls Clubs of Napa Valley works on her distance learning school work while at the club. Parent Alejandrina Rumbos, a Napa resident who makes a living as a farmworker, said that the club's guidance has been critical for her daughter Alexia, especially because of Rumbos' limited knowledge of English.

With both harvest and the virtual school year underway, child care is among the most pressing needs of Napa Valley’s agricultural workforce, experts say.

Of course, they’re not alone; adequate child care is a need of working parents across the spectrum of industry. But for low-wage essential workers who continue to work outside their homes, an inability to find child care during work hours can force impossible decisions – either to give up a job and a source of income, or to leave an underage child home alone during the virtual school day.

“(These workers either) don’t have child care providers available to them (or they) don’t have the financial means to cover the cost of child care,” said Lupe Maldonado, family services manager at Upvalley Family Centers. Maldonado typically directs families to Community Resources for Children, which can subsidize child care, or suggests coordinating with extended family. Otherwise, “we don’t have very many options,” Maldonado said.

Farmworkers, upon whom the Napa Valley relies so heavily for its wine grape crop, often work long, unconventional hours – especially during the harvest season. Intermittent heat waves, smoke and the coronavirus pandemic this year have prompted some growers to turn to an almost nocturnal harvesting schedule, hoping to avoid having crews working in masks amid the highest of daytime temperatures.

During harvest, Maria Hurtado’s husband Jose might work as many as 14 hours in one day, said Hurtado, who works for Community Action Napa Valley. The two have been sending their oldest daughter, Ximena, now a fourth grader, to the Boys & Girls Clubs of Napa Valley for the last four years. The pair are grateful, Hurtado said, to now have the option to send Ximena there during the school day.

“If we weren’t members of the club, my options would honestly be almost none,” Hurtado wrote in a text message in Spanish. Ximena’s grandmother has been staying with the family and had been able to help with childcare at the onset of the pandemic. But she will soon be returning to her home in Mexico, Hurtado explained.

“For that reason, when the club let us know that we could bring (Ximena) there, it was a huge relief, because we know it’s a safe and trustworthy place,” Hurtado said.

Farmworkers and other essential workers may also seek childcare during the school day because they do not have the resources to help their children through the virtual school day – whether that’s a lack of WiFi connection for residents of rural areas, or due to a language barrier, Upvalley Family Centers’ Ocón said.

That’s been the case for Napa resident Alejandrina Rumbos, a farmworker whose daughter Alexia, a second grader, is set to spend her school day at the Boys & Girls Clubs as well. Not only will the club provide much-needed childcare for Rumbos, who has been grappling with an on-again, off-again work in the vineyards since the pandemic began – it will serve as an educational resource for Alexia.

“It’s difficult for me to help her, because I don’t know much English,” Rumbos said in an interview in Spanish. “She’s going to learn more at school there than she would (at home) with me.”

Sensing additional need in the community, the Napa Valley Farmworker Foundation (FWF) last week announced they would be partnering with the Boys & Girls Clubs to provide funding for two months’ worth of childcare for the children of farmworkers.

The Napa Valley and American Canyon campuses opened for fall with expanded hours on Sept. 1, according to Executive Director Greg Bouillerce. The $50,000 fund – composed of $25,000 donations from the Foley family and Vintners Harmon and Joanne Brown – will cover 62 slots.

The club has had to raise fees to cover the cost of expanded hours—from $100 monthly to $300, Bouillerce said. The organization has identified 30 member families, who qualify for and will be retroactively awarded the scholarships, including Rumbos and Hurtado.

Second-generation vintner Courtney Foley said the family had previously worked with Corazon, an organization in Healdsburg, on a child care initiative for farmworkers in Sonoma County. The Napa Valley Grapegrowers (NVG) together with FWF was already attuned to the issue, Foley said, and brought up the potential partnership. In making the donation, Foley said, the family hoped to make a meaningful difference for workers so they could know their children were “safe and comfortable” during work hours.

At least 100 families (one for each of the 62 slots plus a waitlist of around 40) as of the end of August had expressed interest in the scholarships, according to NVG and FWF CEO and Executive Director Jennifer Putnam.

“If (the Boys & Girls Clubs) can, they’ll open it up right away, because these families need childcare immediately,” Putnam said. “The minute we sent the newsletter (announcing the program) to our vineyard owners in Napa, the slots were filled up.”

The club is already reassessing its numbers, Bouillerce said, and by this week may very well have expanded its capacity to 160 from 120. It will prioritize farmworkers along with all essential workers if it is able to create the additional slots, he added.

Watch Now: How to navigate flu season in light of the coronavirus pandemic

A lawsuit alleges a Silverado Resort manager lured two young women to the Valley, resulting in the death of one of them.

Napa County needs to see further case reductions to make the jump from red to orange on the state's COVID-19 rating system.

Deputy Jarecki returned fire, killing her assailant, after being shot at three times.

A student at the Boys & Girls Clubs of Napa Valley works on her distance learning school work while at the club last week. The club is looking to create additional space to try and accommodate demand from essential workers, like farmworkers, and other residents.

A student at the Boys & Girls Clubs of Napa Valley works on her distance learning school work while at the club. Parent Alejandrina Rumbos, a Napa resident who makes a living as a farmworker, said that the club's guidance has been critical for her daughter Alexia, especially because of Rumbos' limited knowledge of English.