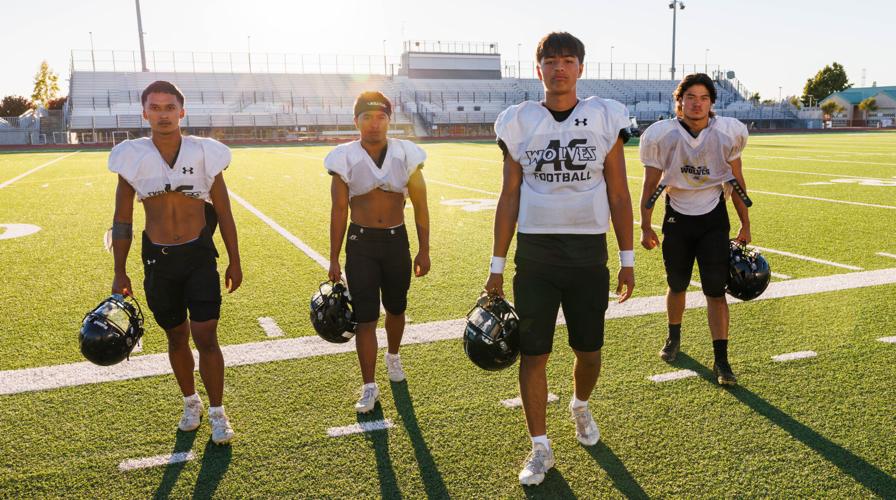 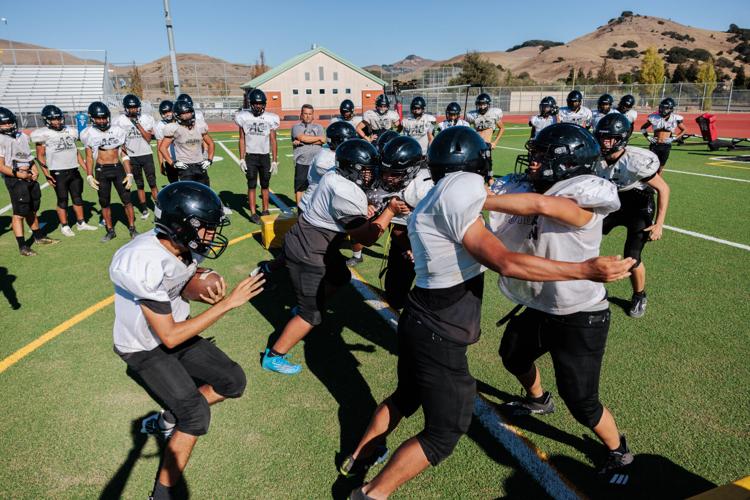 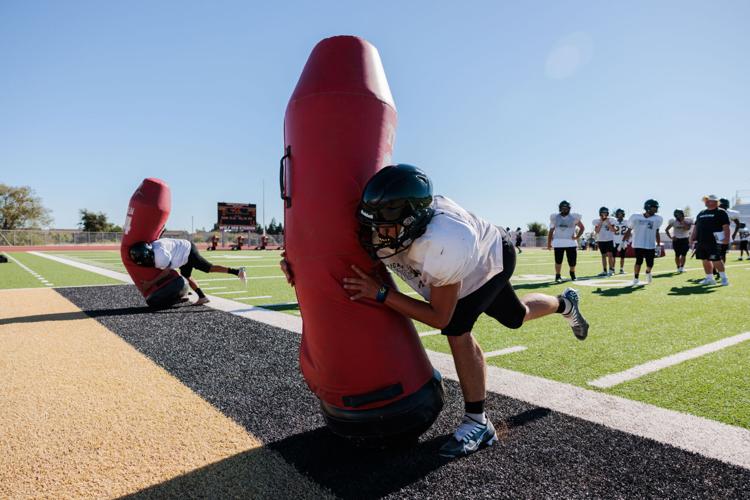 AMERICAN CANYON — Some head coaches ask their players to aim high and keep their eyes on the prize.

American Canyon’s John Montante wants his Wolves to keep their eyes on the game they’re playing that week, and nothing else.

The Wolves ran into bad luck last year with injuries to starting quarterback-safety Kaleb Anderson, who missed two games due to concussion protocol and a positive coronavirus test, and running back-linebacker Kapono Liu, who had more than 1,200 yards rushing in seven games before missing the last three games with a broken left foot. Liu had broken the single-game school record with 369 yards and 4 touchdowns in a 33-14 preseason win at Berkeley.

Thankfully, American Canyon had versatile slotback Sean Yumang to fill in for Anderson and guide the Wolves past Berkeley and in the Vine Valley Athletic League and season finale against Petaluma. Also against Petaluma, lineman-turned-fullback James Aken had a strong rushing game behind an inspired offensive line.

All four of those skill players are back as seniors, wanting to see the first North Coast Section playoff action of their careers. Montante said the team will cross that bridge when it comes to it.

“We’re not even looking that far ahead. We’re working on getting better every day. It’s a win-the-day mentality,” the coach said. “If they do that, all of that other stuff takes care of itself. The process yields the product.”

“We’re still kinda emerging from the COVID situation a little bit; that really hit our program hard,” Montante said. “It stunted some development among the classes. But seniors like Elijah De Vera, Kapono, Kaleb and Sean have done a really good job this offseason taking ownership of things.

“This season’s got the capacity to be really, really fun.”

American Canyon’s offense was hard to predict last year with the varying personnel available. The Berkeley game was run after run, but the Wolves handed Casa Grande its only league loss, 44-30, on the road with long passes by Anderson.

“In those nonleague games (like Berkeley), you’re trying figure out what your identity is,” Montante said. “We thought we’d be able to be a little bit more balanced last year. We learned at the Berkeley game with (offensive) linemen, what really lit their fire, and we rode that because we have a physical runner in Kapono.

“This year, we have a couple of decent runners. We’re still trying to figure out what our identity is, but we are further ahead than we were at this point last year. We’ll see what these next few weeks show us what we’ve learned.

Asked if there’s anything Anderson can do to keep from getting injured, Montante quipped, ‘Yeah, don’t play. It’s football, man, next man up. You do what you gotta do. You never want to lose your quarterback, but you roll with it.”

Anderson certainly stepped up against Casa Grande, as did seemingly the entire team.

“The Casa game was its own kind of deal. The kids really answered the bell,” Montante said. “Sometimes adversity can sharpen you, and against Casa, they were ready to go. Last year sometimes we didn’t know what kind of (American Canyon) team was going to show up. This year it’s a little bit less like that, where we have more of a sense of who we are and who we could be. But they’re kids, and sometimes when you take three steps forward you take one step back, but the overall progress has to be forward.”

He'll let them focus on getting payback against Rodriguez for beating them 15-13 on a last-minute field goal in last season’s opener, also in Fairfield. But they’ll have to wait to think about last year’s 31-22 VVAL loss at home to Justin-Siena, or running the table.

“It’s a one-game table right now,” he said. “We need to get better every day and respect the process.”

He said the Wolves have a blend of leaders.

“Kapono doesn’t say much. But when he does, you listen. Same with Kaleb,” he said. “Sean doesn’t have a problem telling people what’s going on. Same with Elijah. We’ve got some young leaders and like with (most) young leaders you have to mentor them, teach them how to really lead. But they’re doing a good job.”

Montante said there’s not so much a battle at each position as packages.

“The O-line had done a good job of jelling; they’re ahead of where last year’s group was at this point,” he said. “They have the capacity to be really good. (Junior) Dominic Ford is the center and he’s doing a good job. He’s young, but big (6-2, 210 pounds) and really intelligent. Ren (Ducut, 5-9, 215-pound senior) and Tyler (James, junior) are a couple of goofballs, but they’re my goofballs and I wouldn’t trade them for anything.

“You’ve got Rigo (Hurtado, 5-foot-11, 220-pound senior), who doesn’t say much. He just smiles at you and goes to work. Ryan (Landaverde, 5-10, 205-pound senior) does such a good job and works so hard, is very coachable and very intelligent. They’re a group with a lot of potential.”

Along with slotbacks Yumang and De Vera, catching passes will be junior wide receivers-kickers-punters Noel Angel and Xavier Lopez, and freshman Abdul Kates.

“There are some good kids in that receivers group that could really contribute, and it’s really fun because they do a good job of pushing each other,” Montante said. “They all want the ball. When the ball goes to one guy, there’s always a little bit of chatter, but it’s good-natured.

“If the mantra of competition works for Pete Carroll, it works for us.”

Along with Aken and Liu in the backfield is junior Ohani Castillo.

“Ohani’s come on real well, and Kapono is Kapono, so we feel pretty good about the guys who are going to be toting the rock,” Montante said.

“Our D-line has the ability to be really good. They’re quick. We don’t have a lot of size, but we’ve got some good guys, like (senior returner) David Garcia and Aken. Delano Murray is playing noseguard and he’s hard to move. He doesn’t say a whole lot. He just goes to work, Kapono runs around behind him and makes tackles. We’ve got different kinds of packages and some depth in the secondary.”

The coach said Anderson is ready to roll again.

“He’s got good command of the offense,” the coach said. “A lot of things have to fall into place for a passing game to work, but I think he’ll be OK in that department.”

So the Wolves will never be a 30-pass-a-game kind of offense?

“At the end of the day, you want to put the kids in position to be successful. You want to win football games. I don’t care what we do on offense, as long as it leads to points.”

The American Canyon High football team was like an octopus, as eight players touched the ball on offense and seven scored in its 52-6 hammering of Napa High at Memorial Stadium on Friday night.

When the dust settled on the first-ever win by little sister over big sister, the American Canyon High volleyball players didn’t scream or eve…

The American Canyon High football team, a week after giving up twice as many points as usual, nearly pitched a shutout in a 57-7 homecoming rout of Sonoma Valley in each team's Vine Valley Athletic League opener Friday night.

American Canyon brothers Bryce and Curtis Berry are piling up yards and points in youth football for the Junior Wolves in their 8-and-under and 12-and-under age divisions.