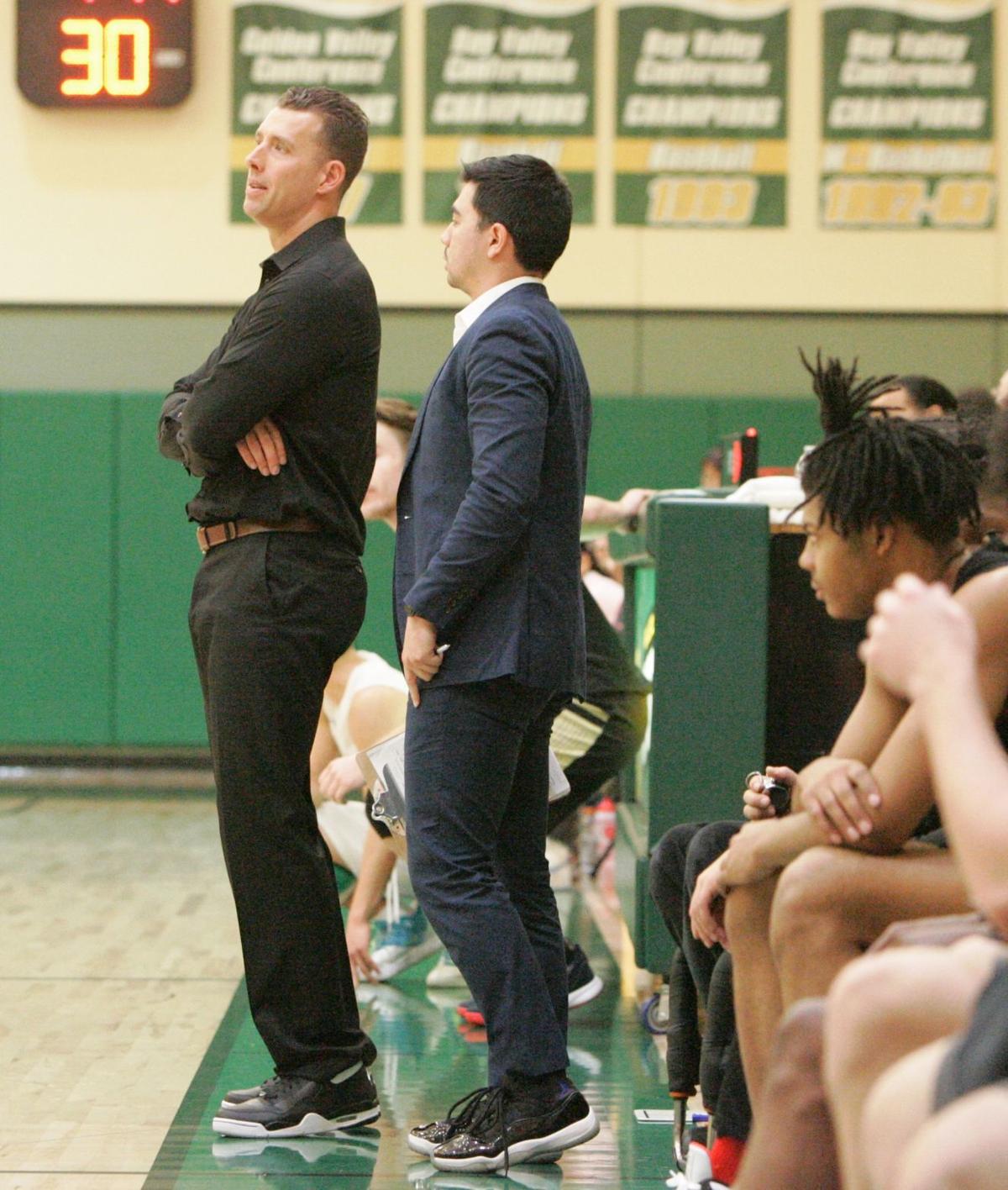 Malik Ghiden, the Napa Valley Register’s 2017-18 All-Napa County Boys Basketball Player of the Year, and Ethan Battistini, one of five finalists that season, are still chasing their hoop dreams in Marin County.

Two of five sophomores on the College of Marin team, they helped the Mariners cap a two-game season sweep of Napa Valley with a 77-74 Bay Valley Conference win Wednesday night in Napa.

The Mariners remained fifth in the nine-team conference after avenging last month’s 71-69 home loss to the Storm (5-17, 3-7 BVC).

Ghiden netted 7.3 points, 2.9 rebounds and 1.3 assists for Marin in 21 games last season, while Battistini averaged 1.2 points and 1.4 rebounds in 25 games. The Mariners finished fourth in the BVC at 10-6, just a game behind second-place teams Los Medanos and Merritt.

Thom, a 1997 Vintage High graduate who coached his alma mater’s varsity boys from 2007-2010, is in his third season at the Marin helm after seven years as a strength and conditioning coach for men’s basketball at UC Berkeley and Washington State.

Battistini, a 2018 St. Helena High graduate, said he first heard about Thom from his high school coach, Joe Densberger, who coached Thom’s younger brother Kevin during his 10 years as the Vintage JV coach.

“He’s really the reason I wanted to play for Marin,” Battistini said of Scott Thom. “Basketball is the game I love and Coach Thom is a coach that you want to play for. A lot of us wouldn’t be there if he wasn’t there. He’s the easiest coach to play for.”

Added Ghiden, “We love Coach Thom. He treats us like a family. He knows what’s best for us. He knows what can get us to the next level and just what we’ve got to do. He has a lot of experience everywhere, so he knows what he’s doing.”

Many expect a county player of the year to sign with a four-year university right out of high school, but that didn’t happen for Ghiden.

“I had a solid 3.0 GPA. I just didn’t get that much exposure out of high school,” he said. “It was a humbling experience, most definitely. My first year at Marin, I was trying to get my feet back and my confidence went down a little bit. But everything’s for a reason and I’m just trying to make the best out of this. (Playing for a four-year school) is still an opportunity I’d love to have and I’m still working and working hard for it. I’m starting to develop more of who I am and my game and develop more of a defensive game, and offensive game as well. I’m just trying to be a complete player.”

Since losing five of their first six BVC games, the Mariners have won three of four to get back in the mix.

“It’s a lot of competition in community college,” Ghiden said. “We were off to a little bit of a rough start, but we’re starting to pick it up, starting to get our flow, get our team chemistry on and everything like that. Everybody was all over the place, so we just had to integrate our playstyles into one and just go with that.

“Cameron was a redshirt at first, but he got moved up when Tyler got injured. But it’s been great playing with my old teammates. I’m more comfortable at this school because I know people I’ve known for years.”

Battistini commuted from Angwin during his first year at Marin. He recently found a place to live in Marin County, but said he’s moving back to Napa County because “it’s just so expensive down there.”

Being from Upvalley, with St. Helena in a lower division than American Canyon, Battistini said he never met Ghiden, Sims nor Williams until they converged at College of Marin.

“St. Helena was small, so we didn’t really play any good competition,” he said. ““It’s fun and different at Marin. Malik is a beast on the court, man. Everyone on the team looks all hard on the court, but outside they’re all sweethearts. We’re all really close, which is good because a lot of times teams have cliques and stuff.”

Battistini said he’s hoping to play at the four-year level.

“Last year I was behind Joey (Potts), who was a bigger and taller and more experienced guy than me, but now I’m starting,” he said. “I’m kinda weaving through the offers right now and seeing where I can also get in academically. I’m still in the process of doing that right now.”

Ghiden led the Mariners with 22 points in Wednesday night’s win, while Battistini added 4.

“Every time we play Napa, it’s always a huge crowd and a lot of competition,” Ghiden said.

Same with when they play Contra Costa, which also has former American Canyon standouts Sam Johannessen and John Wade. The Comets visit the Mariners at 5:30 p.m. Friday.

“John and Sam, we love ‘em to death, but we got to beat them, too,” Ghiden said. “We’re playing them Friday so we got to get after them.”

Napa High grad Charles Boyett was selected to UC Davis’ All-Decade Team for the years 2010 through 2019.