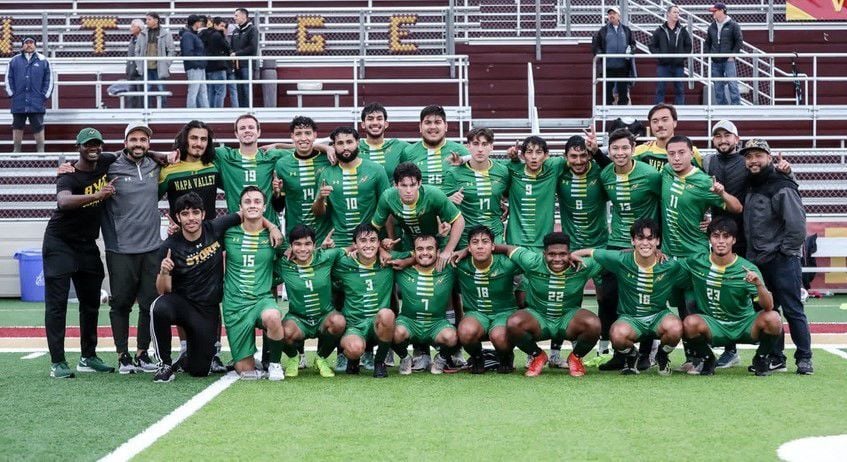 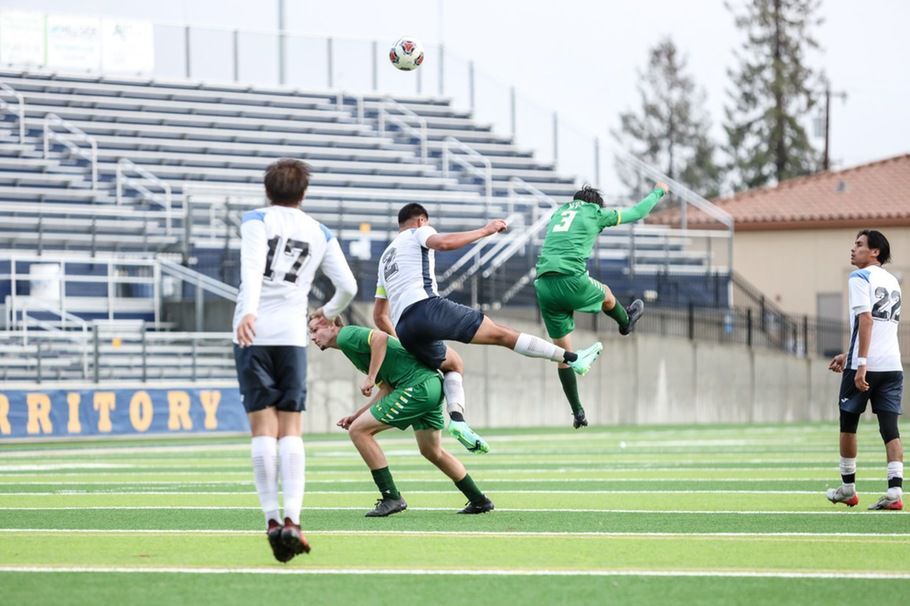 Justin-Siena graduate Josiah Gutierrez (3) and American Canyon product Billy Biondini fall after going up for a header against visiting Yuba at Memorial Stadium during a recent game. The Storm had to use the stadium after their field was rendered unplayable by a torrential rainstorm. 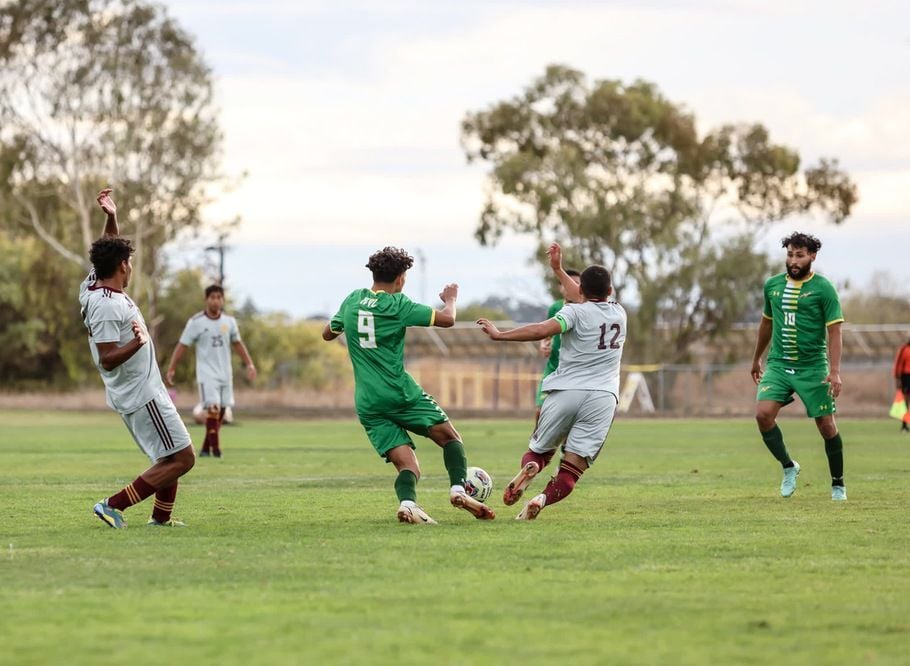 With 15 of its 25 players from Vine Valley Athletic League high schools, the Napa Valley College men’s soccer team was like a band of brothers.

But the Storm didn’t act like brothers from a typical family, driving the one in charge of them crazy by messing around or getting into trouble.

The one in charge of these brothers around the pitch was not their parents. It was NVC head coach Rogelio Ochoa and assistant coaches Max Alvarez and Yami McHombo, and Ochoa said it was a team of mature, driven student-athletes who were all business around the soccer field.

“These are officially adults,” he said Friday. “If you’re here (in college), no one told you to be. It’s not your mom or dad forcing you to do it. You wanted to be a student-athlete. We teach them time management and talk about academics and being on track to transfer out, but at the end of the day they’re choosing to be here.

“I do have some who try it and after a week or two they decide it’s not for them, and we respectfully go our separate ways. But for the most part, they’re adults and they want to be here. It’s new and it is different. It’s not high school. It’s not club. They are adults, and most of them work, so it’s just managing time and being able to use resources needed to make sure they’re successful not just on the field but in the classroom.”

The Storm were quite the draw not just because most of them were from the area, but because they managed to recover from an 0-8 start. The eighth loss was to Marin in their Bay Valley Conference opener.

“When you’re 0-8, there’s a thin line between turning the season around and just (not being motivated anymore),” Ochoa said. “We had quite a bit of challenges, whether it was COVID, having too many games within a small period of time, or injuries. But it’s the new norm; everyone has a COVID story.

“When we lost that first one versus Marin. It was tough, so the players and coaching staff got together because we had just assumed we would go into conference and play well and win. We played tough teams in our nonconference schedule, so losing our first (BVC) game gave a spark to the team and actually made us closer and we never looked back.”

They didn’t lose another BVC game, brushing aside a 4-4 tie at perennial rival Contra Costa to finish 8-1-1 in conference play, win their fourth straight BVC title, and qualify for the playoffs. The tie was in San Pablo after a storm that almost made Contra Costa’s field unplayable.

“Six of the eight goals were because of people slipping. The ball’s doing something that you don’t want it to do, whether it got stuck on the water or it didn’t roll fast because of the wet grass,” Ochoa said. “There was a lot of emotion and it went back and forth. Our field was the same so (after playing at Santa Rosa and Merritt) we played our last two home games at the Raiders Field (behind Redwood Middle School) and at Memorial Stadium (where they beat Mendocino 8-1 and Yuba 2-1, respectively).”

They fell to Hartnell and Santa Rosa in the middle of their conference schedule, “but we played well compared to the first eight losses,” Ochoa said.

The fact NVC men’s soccer has never won a California Community College Athletic Association Northern California Regional game, it’s never seemed surprising when the Storm won the BVC each year only to get shut out in the first round of the playoffs.

That all changed on Saturday. Napa Valley didn’t win, but the 16th-seeded Storm did manage to score in a postseason game for the first time in recent memory — twice, in fact. It was a remarkable performance they traveled all the way down to Salinas in Monterey County to face the No. 1 seed, Hartnell. In their 3-2 win, the Panthers didn’t score the winning goal until the final minutes.

“It was literally a first shot. He won the ball and took a shot on his own," Ochoa said in a story at nvcstorm.com on the team page. "Everyone was kind of stunned – like, wow. We couldn't ask for a better beginning to the match."

Hartnell (18-1-2) took a 2-1 halftime lead with goals in the 18th and 27th minutes, but freshman striker Emmanuel Duran tied it for the Storm in the 81st minute.

The story on the team’s webpage noted that Duran — the Offensive Player of the Year on the 2021 All-Napa County team — had scored the winning goals in 1-0 and 2-1 conference wins over Yuba, with assists from freshman left wing Josiah Gutierrez out of Justin-Siena and Rodriguez product Jacob Peppard.

“He may not score a lot, but he scores when it truly matters most," said Ochoa on the team page. “When he has a ball, he knows how to move and put his body between a defender and the ball, so he doesn't lose a ball. He just understands what to do with the ball. He's a special player. And lastly, he doesn't get nervous in front of the goal. He puts his chances away.”

Duran finished with 4 goals and 5 assists for 11 points, ranking on the team behind only sophomore co-captains Billy Biondi out of American Canyon (8 goals, 7 assists, 23 points) and Marco Manzo out of Vintage (8 goals, 3 assists, 19 points).

Billy Biondini is the Forward of the Year and Offensive MVP on this year’s All-BVC Team, while freshman Jesus Tapia out of Vintage is the Goalkeeper of the Year.

Also on the First Team are defender Edgar Correa-Saenz out of Vintage, Manzo and Duran.

were named to the All-Conference team. Josiah Gutierrez and Peppard are on the Second Team, and Ochoa is the Co-Coach of the Year.

The Storm players also included James Han out of Pacific Union College Prep and Reynaldo Gonzalez out of St. Helena.

“We usually have one St. Helena player a year, but this year we have three, and we also have one from Angwin (Han),” Ochoa said.

Rounding out the Storm were Daniel Torres out of American Canyon, Erik Vargas and Irving Flores-Hernandez out of Napa High, Alejandro Cano-Munoz out of Bethel, Eduardo Tinoco out of Armijo, and David Duran from Fairfield High.

Billy Biondini’s American Canyon program went from winning a Solano County Athletic League title in 2016-17 team to placing third in its first VVAL campaign in 2018-19. The Wolves haven’t improved on that since, but it didn’t six American Canyon players from playing for the Storm with the Vintage and Napa players who finished above them in high school.

“There’s a lot of individual talent out there that doesn’t always translate to team success and Billy is a perfect example,” Ochoa said. “I have had many great American Canyon players in the past (at NVC). I went to Vintage, I have an assistant coach who went to American Canyon (McHombo) and my other assistant went to Napa High (Alvarez. We’re a soccer community and whoever is willing to come out has a chance. There’s no such thing as favorites here. I mean, I teach at Napa High but I went to Vintage. I just love that I can give back to my community.”

The players from Vintage, which has won Monticello Empire League or VVAL titles over Napa High seven of the last eight years, and Napa, which broke through for the 2015 league title, are used to not only reaching the playoffs but having playoff runs. Those that have moved on to the Storm the last four years have continued to make the postseason but hit a wall there. Unlike in high school, smaller community colleges like NVC have to play big ones in the playoffs.

“Unlike in high school where you have different sections, everyone is together, so it’s not easy to make playoffs and it’s even harder to win a playoff game or have a deep run,” Ochoa said. “No matter what school you are, they’ll tell you it’s a beast,” Ochoa said the day before his playoff game. “I think the most important thing is that we’re healthy. I don’t think we’ve ever had a playoff game where everyone available and healthy after 2½, almost 3, months of games, 19-20 games. The fact that we’re healthy gives us a better chance.”

Now that the season is over, the three sophomores will look to make rosters at four-year schools.

“We have a handful of players who have done well academically and are ready to transfer in the spring or fall of 2022,” Ochoa said. “That’s our goal, to get them as exposed as much as possible and hopefully get them to play somewhere. Right now a lot of (four-year) coaches are still in season and have what they need, but because of COVID a lot of students will stay another year and maybe go to school and not play because of COVID. So once the coaches figure out who they have next year, they can assess and figure what exactly what they need for the following season.”

Those who move on will have helped put NVC on the map by nearly upsetting the top seed, and just on the scoreboard, in the playoffs. Ochoa hopes the others come back and pull out that elusive playoff win. All he’s sure of is the Storm won’t give trying.

“Most people would probably write off a team that is 0-8 at the beginning of the season and this team was extremely resilient and showed that they were able to turn it around. Every season has challenges and we definitely had them until the middle of the season,” he summed. “They were coachable and understanding that even though the results weren’t favorable, our style of play was.”

Justin-Siena graduate Josiah Gutierrez (3) and American Canyon product Billy Biondini fall after going up for a header against visiting Yuba at Memorial Stadium during a recent game. The Storm had to use the stadium after their field was rendered unplayable by a torrential rainstorm.