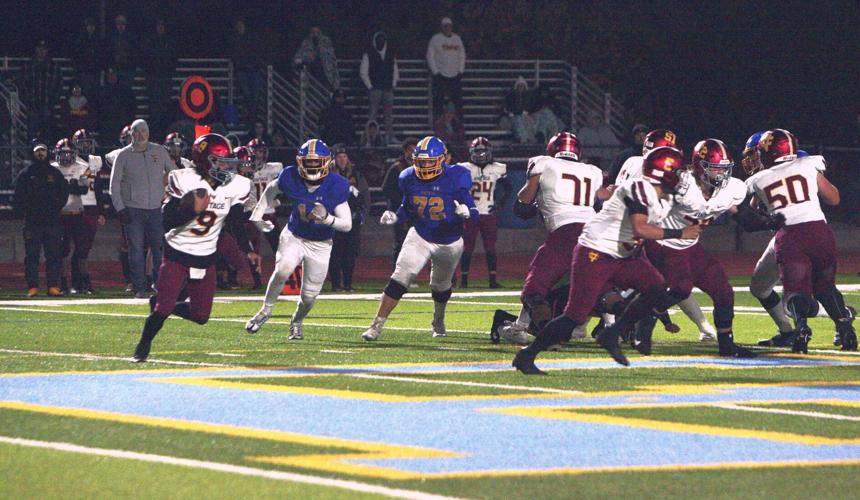 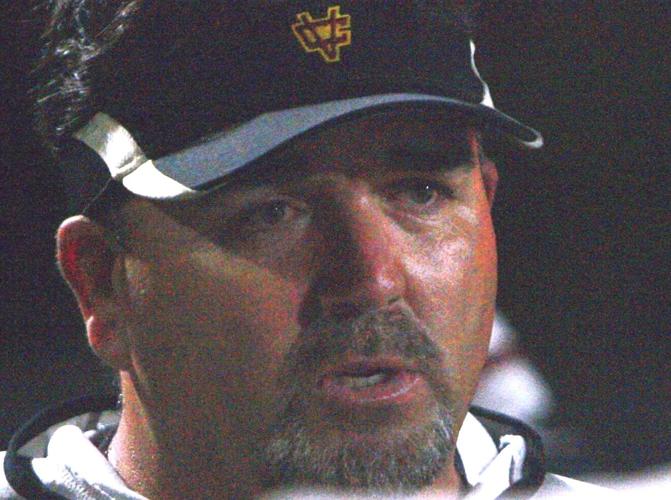 Vintage head coach Dylan Leach talks to his players after their 34-28 loss to Foothill in Friday night's NCS Division 2 playoff opener in Pleasanton. 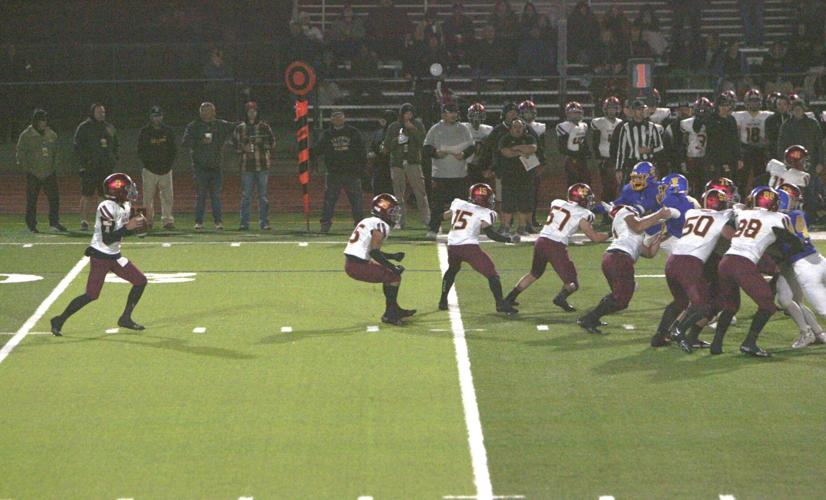 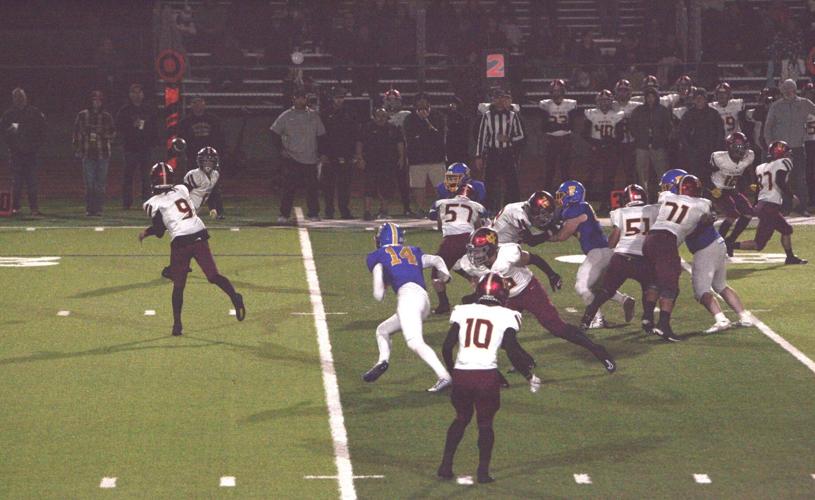 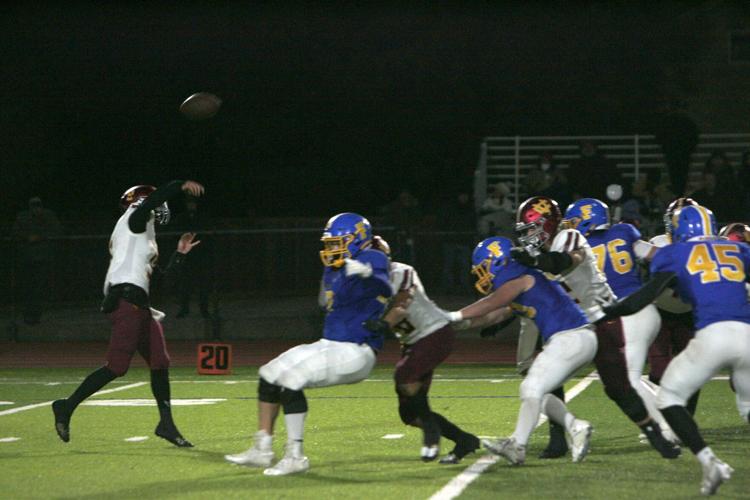 PLEASANTON — Si Sabbagha was just being the “next man up,” the sports saying the reminds every first backup they’re one injury away from starting.

The Vintage High junior got that first varsity start at quarterback Friday night, two weeks after a first-quarter injury to senior Elias Alvarez in the Big Game against Napa High had forced Sabbagha to call signals for the last three quarters.

Playing his first full game behind center in a North Coast Section Division 2 playoff opener at No. 4 seed Foothill, almost an hour from home, Sabbagha didn’t look like a first-time varsity starter until all the pressure in the world was on him during a last-gasp drive.

He was off the mark on all three pass attempts during that final drive, including an overthrow on fourth down from the Foothill 15-yard line that allowed the Falcons to run out the clock on a thrilling 34-28 victory over the fifth-seeded Crushers.

“When you’re coming into your first start and it’s in a playoff game, you’re going to be pretty nervous,” Sabbagha said afterward. “But I knew I had a great team around me. I knew there would be mistakes like in every game and that as the game went on we would make up for them. There’s no one to blame. We’ve just got to go out there and play.”

With the Crushers (6-5) getting a league bye last week while becoming league co-champions with American Canyon’s win at Petaluma, Sabbagha had two weeks to prepare for his monumental first start. He had a great first half, completing 4 of 5 throws with two touchdown passes—a pretty 47-yarder to Jacob Fiene and a 27-yarder to a wide-open Matt Ackman — after Ackman had opened the scoring with a 10-yard scoring run on a direct snap — that put Vintage up 21-14 with 6:14 left in the half.

But Foothill (7-4) answered once again. A 39-yard pass from the Falcons’ own junior quarterback, Erik Olsen, to senior Luke Haviley (four catches, 78 yards, TD) led to Conor Baesemann’s 3-yard scoop-and-score of his own team’s fumble. A bad hold on the extra point kept Vintage ahead at halftime, 21-20.

But on a night when Vintage’s potent ground game was held to 143 yards, it seemed inevitable that Sabbagha’s arm would continue to get tested. It was after Foothill sandwiched two long scoring drives around a three-and-out by its defense.

Vintage was trailing 34-21 with 10 minutes left when a receiver dropped a well-thrown Sabbagha bomb. But a pass interference call on Foothill on the next play kept the drive alive. Sabbagha finally capped the march with a 6-yard scoring strike to senior Nick Sims. Henry Drozdowicz added his fourth extra point to make it a six-point game with 2:51 left.

Vintage then recovered an onside kick at the Falcons’ 49. Runs by Jeffery Page and Riley Anderson got the ball down to the 15. But with 36 seconds left, Sabbagha threw incomplete on third and fourth down and Foothill ran out the clock.

“It was a great game,” Vintage head coach Dylan Leach said. “They played hard, we played hard, and sometimes in life you fall short. Life goes on. We’ve got to be better at the things we do so we’re not in this position, being a No. 5 seed on the road.”

Olsen was 16 of 18 pass for 168 yards and two scores for Foothill, which will visit No. 1 seed San Ramon Valley (9-2) next Friday night in the semifinals.

Leach said Vintage uses passes only when the defense looks especially vulnerable to them.

“We’re not a passing team. But I’m going to take what they give me, and they were giving us those opportunities to pass,” he said of the Falcons. “They were trying to match up outside linebackers on our fast guys and that just wasn’t going to work. Si has a lot of moxie. He comes out and just plays hard. We’ll fine-tune some small things that he’s got to work on for next year. We like Si. He puts a lot of effort into what he does.

“We’d love to have had Alvarez out there. Elias has been a rock for us for four years here, but that’s the game of football. These seniors have done so much for us and we appreciate them.”

It was a far cry from Vintage’s previous visit to Roger Dabney Memorial Field, a 52-6 preseason rout by Foothill in 2013 that was three years before the Leach Era began. Still, Leach doesn’t want a feather in his cap for taking the perennially strong Falcons to the wire this time.

“I feel like we are (a perennial power), too,” Leach said. “We’re 26-2 in our league over the last five years and a perennial playoff team except for last year. We’ve been to the section semifinals twice, against Campolindo and San Ramon Valley, so I feel like we’re one of those programs also.

“The thing for us is consistency. We need to make sure we’re back here (in the playoffs) and winning and so we can put ourselves back on the map.”

“They were a tough opponent. It was a really good matchup. We were excited for it,” he said. “Of course it didn’t turn out the way we wanted it, but hopefully we get an opportunity to play them again. As a team, we put in the work to prepare and the coaching staff put us in a great position this week and really helped me prepare for this game. I’m really grateful they gave me the opportunity.”

Vintage head coach Dylan Leach talks to his players after their 34-28 loss to Foothill in Friday night's NCS Division 2 playoff opener in Pleasanton.