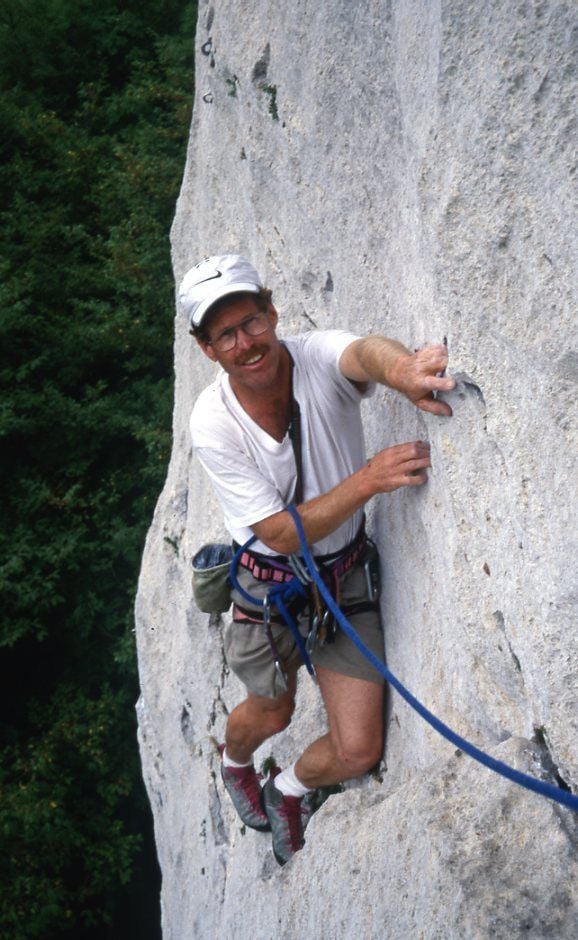 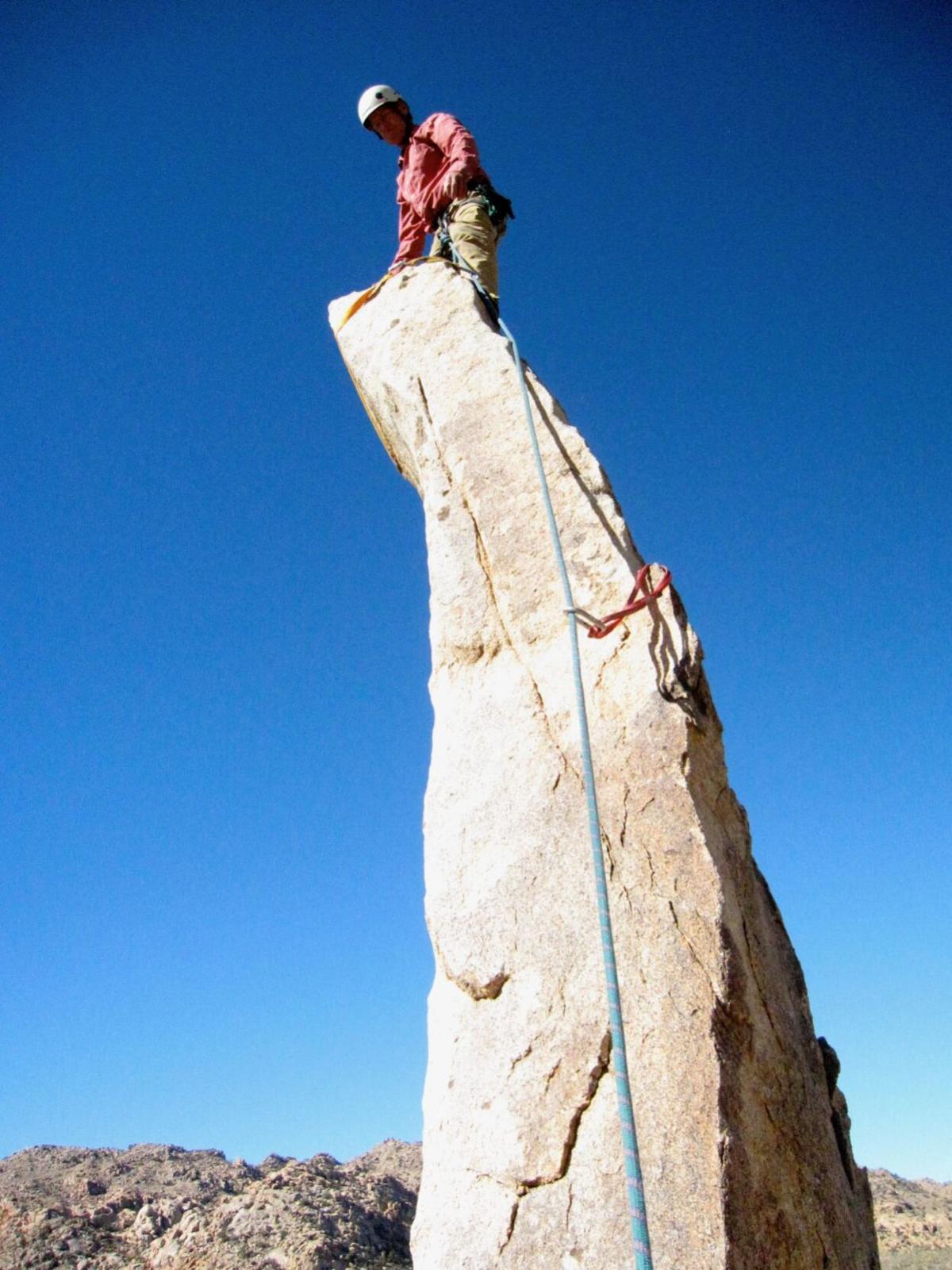 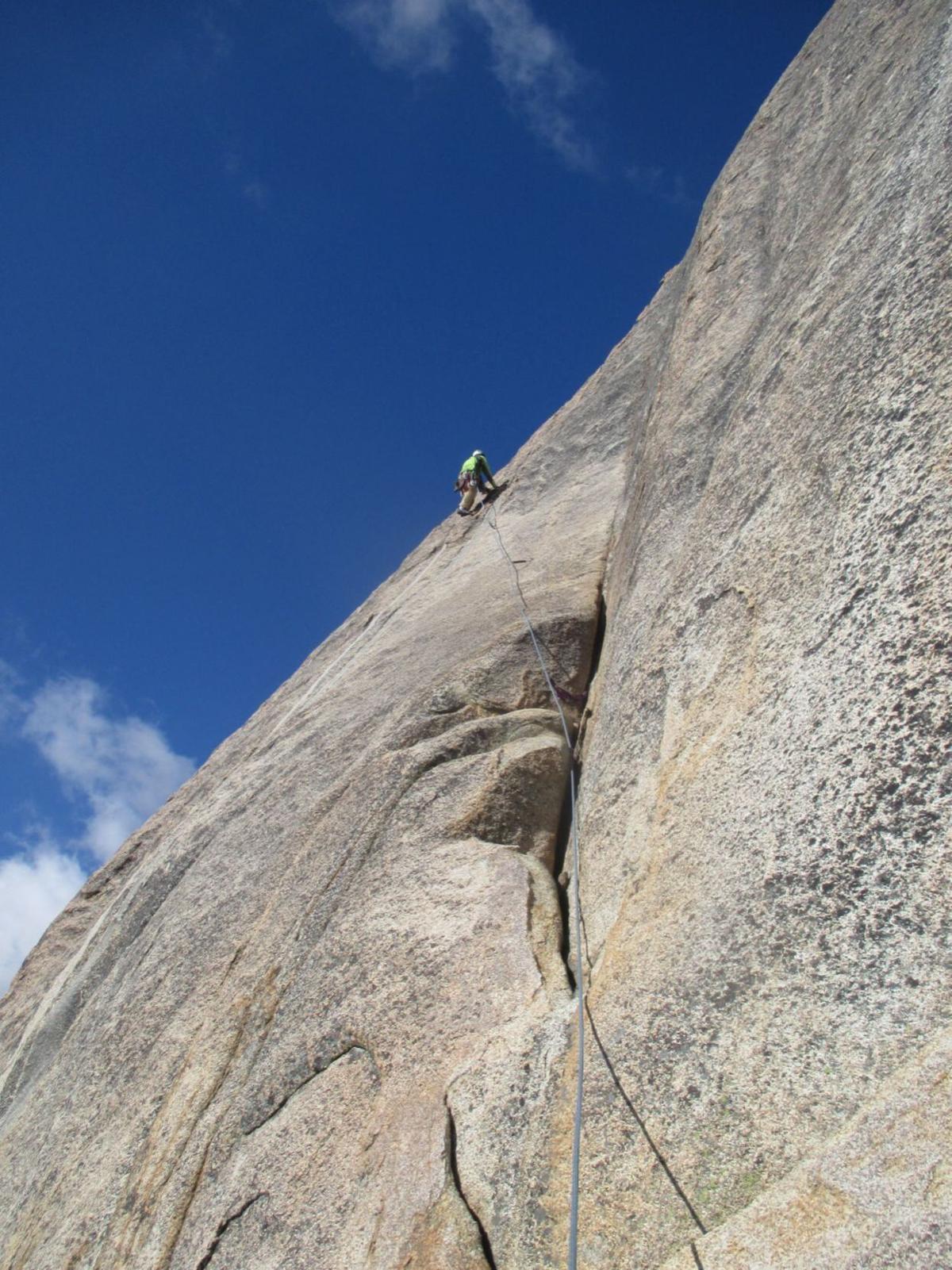 Ken Stanton fulfills a lifelong dream of climbing Half Dome in 2004. 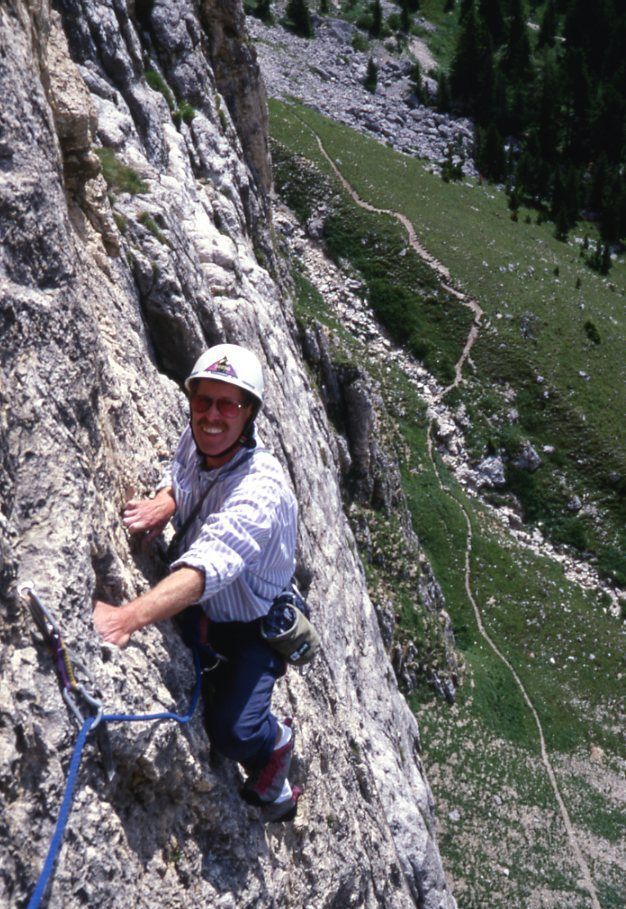 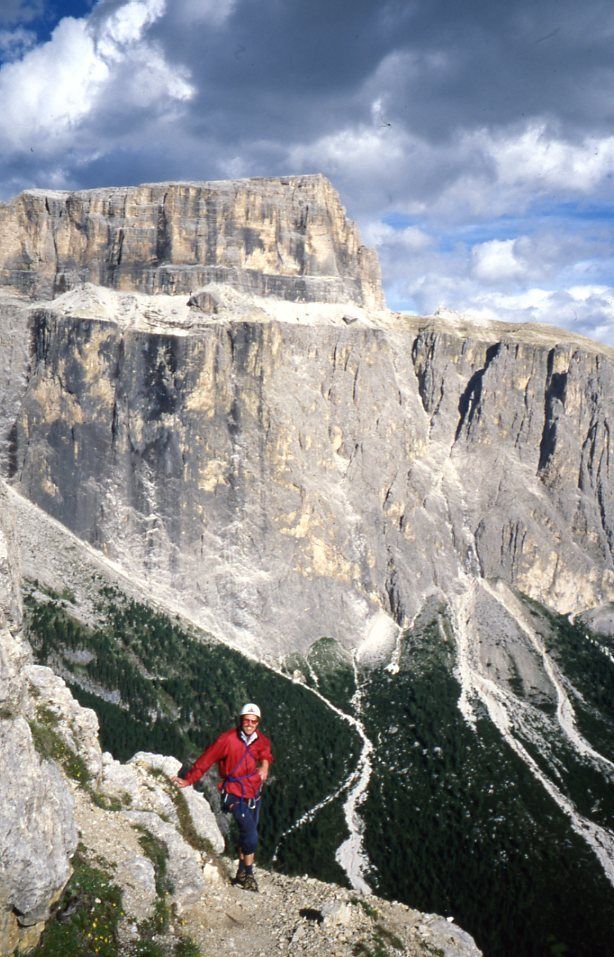 Ken Stanton in the Dolemites of Italy. 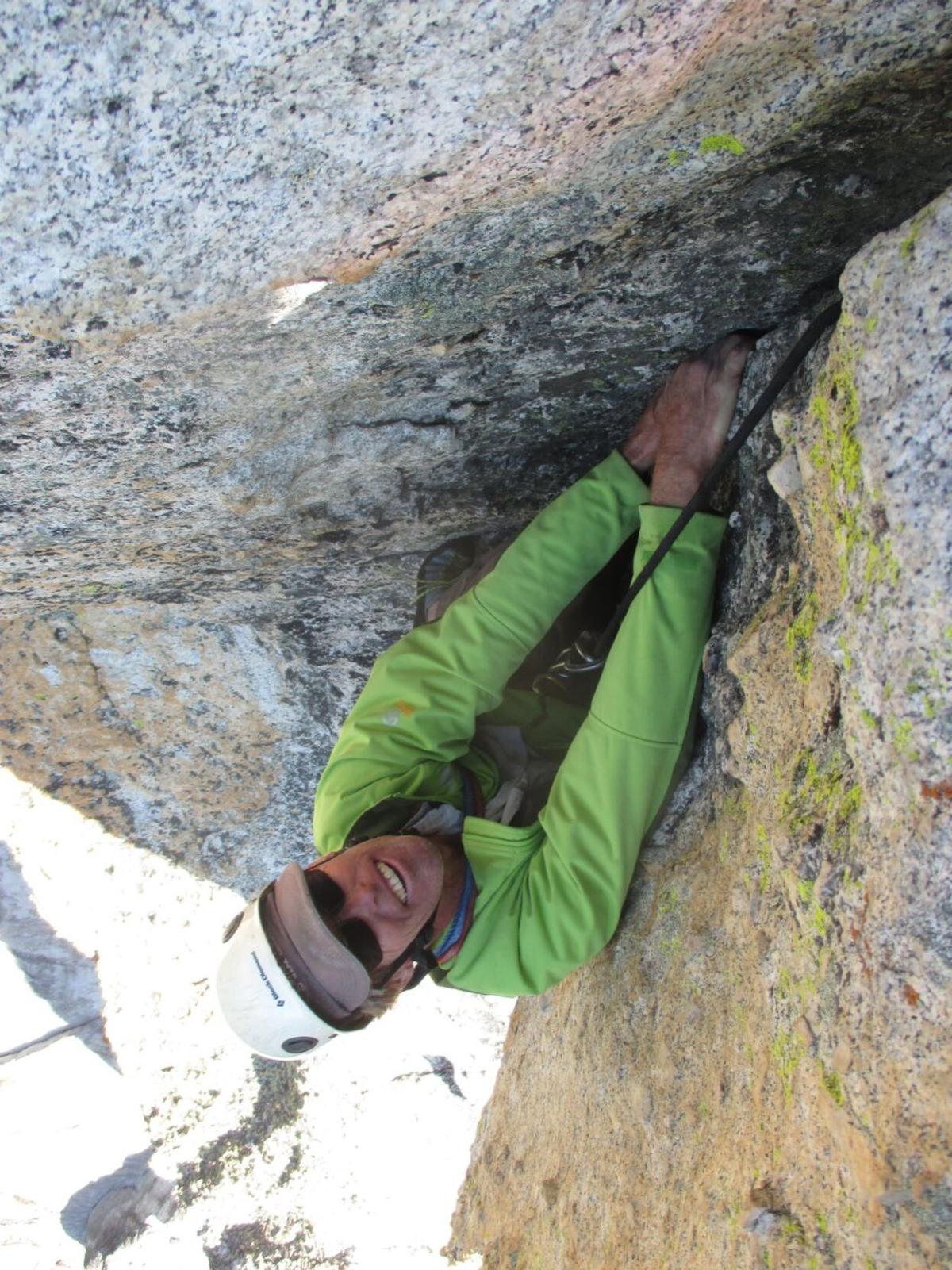 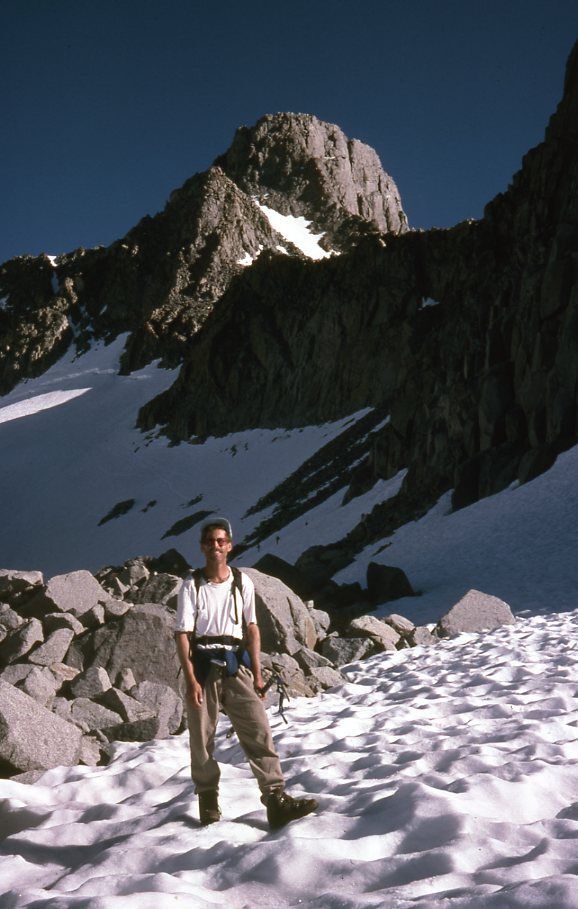 Ken Stanton standing below Mt. Sill, a "fourteener" in the Palisades range of the High Sierra. 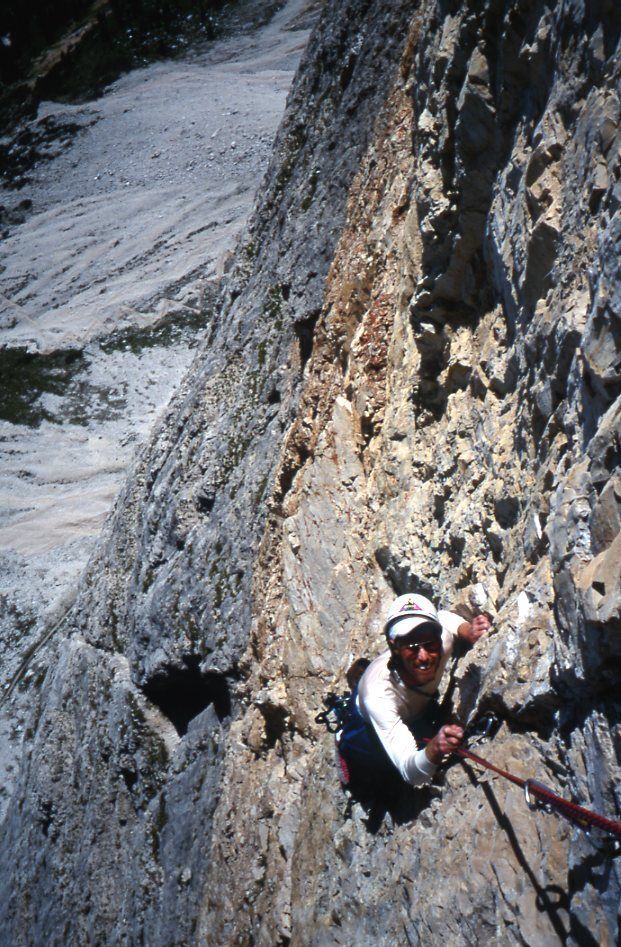 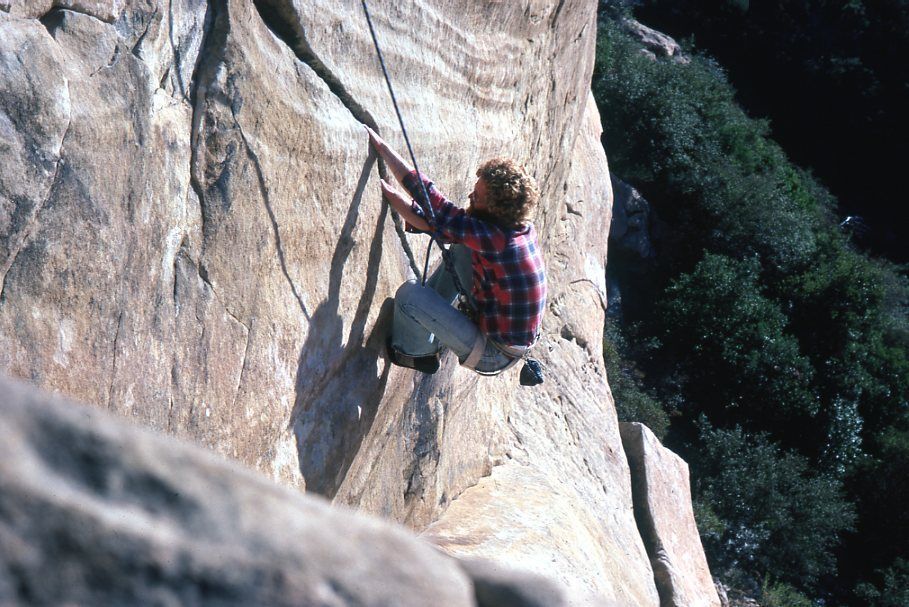 Ken Stanton, shown here in 1974, climbs T-Crack on Gibraltar Rock in Santa Barbara, the route that taught him about crack climbing. 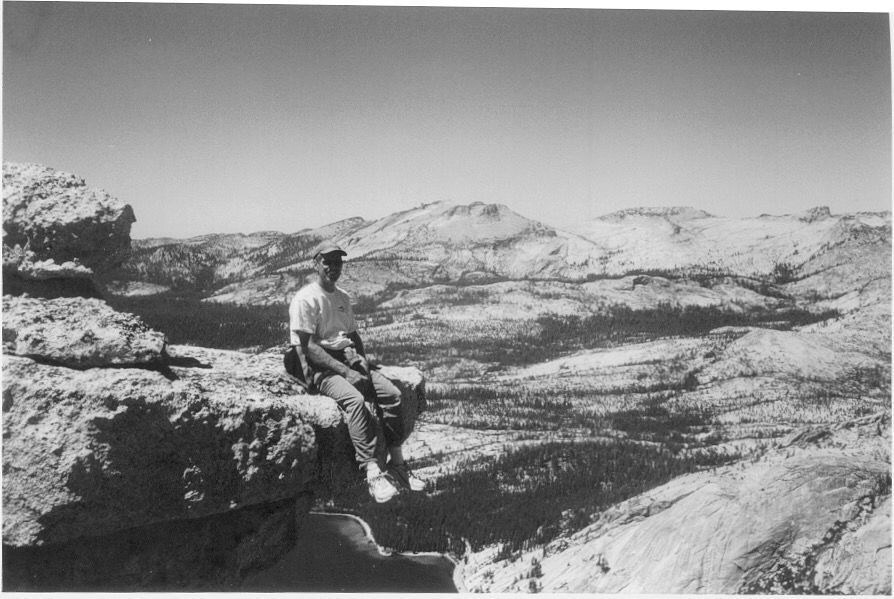 Ken Stanton on Tenaya Peak, in the high country of Yosemite.

You might assume that the kind of guy who sees a sheer cliff towering thousands of feet in the air and decides to climb it would be a daredevil.

In the case of Angwin’s Ken Stanton, you’d be wrong.

“There are old climbers and there are bold climbers, but there are no old bold climbers,” he said, quoting an old adage. “I climb because I wish to live life in a really exciting fashion, but also in a rational way. It’s a balance between fear and desire.”

That could be so, but Stanton’s achievements still aren’t for the faint of heart. He’s climbed El Capitan and Half Dome in Yosemite, clambered up the limestone cliff faces of Italy’s Dolomites, reached the summit of California’s “fourteeners” (peaks exceeding 14,000 feet), and marveled at Pakistan’s majestic Karakoram range.

Stanton looks back on his decades of climbing in a new book, “No Mere Pastime: A Life in High Places,” published by Alive Book Publishing. The title alludes to Ernest Hemingway's line about bullfighting, auto racing and mountaineering being the only real sports — "all the rest are merely games."

To Stanton, rock climbing isn’t about machismo or adrenaline. It’s about finding his limits and experiencing something that transcends humdrum human existence.

“Climbing is a full immersion endeavor,” he said. “It’s body, mind, emotion, and eventually it gets to the spirit too.”

Stanton was an athletic youth, excelling at sports like tennis. At the age of 15 he participated in a mountaineering program through the Explorer Scouts. In the High Sierras he had an epiphany and realized that rock climbing would become a life pursuit.

Another epiphany came years later during an unplanned bivouac at 13,000 feet in the Tetons with no sleeping bags, no warm clothes, virtually no food, and a storm on the horizon.

On the verge of panic, Stanton perceived a message telling him that if he calmed down and hunkered down with his friends for the night, he’d walk off the mountain safely the next day. Stanton’s not sure whether the message came in the form of a voice or a thought, but he knows it came “from outside myself.”

He struggled to put the experience into words for his book, rewriting the passage dozens of times so it wouldn’t come off as too “weird.”

Stanton never felt the urge to climb K2 or Everest, although he did see the Himalayan giants during an unforgettable trek through the Karakoram range. He knows and respects his physical limits, and he’s most drawn to crag climbing, not long snowy slogs.

He noted that crag climbing and mountaineering demand completely different skill sets. For instance, someone could be capable of climbing Everest but stand no chance of climbing El Capitan.

“To visit the Karakoram, just to be there, that was enough,” he said.

Instead of the Himalayan giants, Stanton’s life ambition was to climb the forbidding northwest face of Half Dome. It took five tries over a 25-year span, but he finally did it in 2004.

He’d just climbed the even more intimidating El Capitan, which he calls “the greatest thing I’ve ever done.” Half Dome, with its abundant ledges and cracks, felt like a relative cakewalk, even though it was the culmination of a lifelong dream.

“It’s normal to have a completely sleepless night before a big climb, wondering whether you’re going to die the next day,” Stanton said. “But there were no sleepless nights before Half Dome. I was so relaxed. It was just pure fun.”

“I’m not pushing my limits anymore,” he said. “It’s just about having fun now.”

He hopes “No Mere Pastime” will inspire readers to follow their dreams.

“Whatever you want to do — change your job, change your life,” he said. “Your dreams are the most important thing you’ve got in life, so don’t lose them.”

“No Mere Pastime” is available at Napa Bookmine, Main Street Bookmine, and through online retailers.

Experts share tips on how to prepare for an outdoor workout

Find other ways to fuel up

Work out in a populated area

Know what to do if you end up in trouble

Err on the side of shorter

Listen to your body

Have an ending point

Be mindful of pandemic considerations

And bring a mask

From "No Mere Pastime" by Ken Stanton

"As a young boy and teen, I was good at knocking the ball around a tennis court or a baseball field. It looked like I was headed down the conventional-sports rabbit hole when at fifteen I had a tremendous stroke of luck — a friend on the tennis team invited me to join Explorer Post 356X, whose sole mission was to immerse kids in the world of mountains and mountaineering. On my first High Sierra adventure, we topped Bishop Pass at 12,000 feet and plunged into the glacially carved paradise of Dusy Basin. Two thousand feet above, the dark, serrated peaks of the Palisades towered over us, destined to become my favorite alpine climbing in California. Dusy Creek ripped and roared its way toward the Middle Fork Kings River, bounding over granite falls framed by penstemon and columbine. The spring runoff was high and wild that year and the very trail became a tributary stream for hundreds of yards. I had never experienced anything so alive before. It was like getting my hands on the Holy Grail.

"And that was the moment, the epiphany. Right then, I knew I'd be returning to the mountains for the rest of my life."

The property abuts over 400 acres that the Land Trust purchased in 2019.

Moore Creek Park, a wild and scenic 1,600 acre county park on Pope Valley Road, in the county's northwestern region is bursting with wildflowers such as poppy, lupine, blue dicks and more scattered along well-maintained trails.

Everybody is somebody's rockstar: The musical life of Napa's fire marshal

By day, Gregory Fortune is Napa’s respected fire marshal; and in his other life, he's a musician who has just released his first CD.

Ken Stanton fulfills a lifelong dream of climbing Half Dome in 2004.

Ken Stanton in the Dolemites of Italy.

Ken Stanton standing below Mt. Sill, a "fourteener" in the Palisades range of the High Sierra.

Ken Stanton, shown here in 1974, climbs T-Crack on Gibraltar Rock in Santa Barbara, the route that taught him about crack climbing.

Ken Stanton on Tenaya Peak, in the high country of Yosemite.