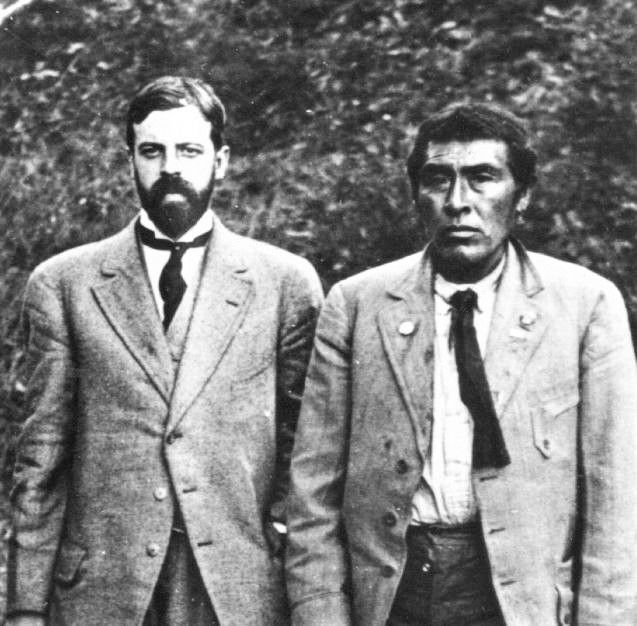 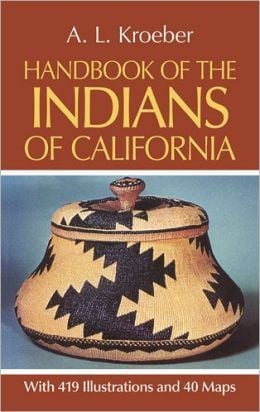 Alfred Kroeber's "Handbook of the Indians of California," published in 1925, is a seminal work about California's native people. 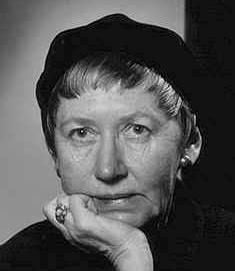 The last member of the Yahi tribe of Native Americans walked out of the mountains east of Chico in 1911. He was weak, emaciated and afraid of white men. Almost immediately he came under the protection of Dr. Alfred Kroeber, the anthropologist who was a professor at the University of California at Berkeley (UCB). Kroeber was also in charge of the UCB Anthropology Museum (now the Phoebe A. Hearst Museum of Anthropology). The Kroeber family spent their summers south of St. Helena.

Kroeber and Ishi became close friends. The history and culture of the Yahi tribe was preserved largely through their collaboration. The great tragedy was that Ishi had no immunity to European diseases and died of tuberculosis in 1916.

Kroeber went on to write the seminal work about Native Americans of California titled "Handbook of the Indians of California," published in 1925. His Berkeley students collected information on western tribes that had not been documented.

In 1926 Kroeber married Theodora Brown in Oakland. She had two sons, Clifton and Theodore Brown. Their son Karl was born in 1927 and daughter Ursula in 1929.

The Kroebers placed an ad in the Star in 1930 wanting to exchange his house in Berkeley for a “hill ranch home for children. Prefer no orchard.” Later the Star announced that the Kroebers bought the property of J. C. Watson for a summer home.

Theodora Kroeber writes in her 1970 book "Alfred Kroeber: A Personal Configuration," “In 1930 Kroeber and I bought a piece of land which in its own time and fashion became as intimately a backdrop for Kroeber’s life as the Arch Street house (his Berkeley house). Kishamish is its name. It comprises 40 acres in the hills on the west side of the Napa Valley, sixty miles north of San Francisco and once part of a Spanish Land Grant Carne Humana ... The redwood house and barn lean somewhat downhill and creekward; dry rock walls as old as the buildings, built by a French vintner many, many years ago, incline also toward the creek.”

When school let out for the summer in Berkeley the Kroeber clan, with pets, books and toys, packed up and moved to Napa Valley for the summer. The children roamed the hills for adventure, sometimes reaching Mt. St. John. The family guest book included many of Kroeber’s anthropology students, writers, scholars and colleagues.

Kroeber’s longtime friend Professor Robert Lowie met his future wife Luella Cole in 1933 at Kishamish. Dr. Lowie and Cole were married in Napa by a justice of the peace. Lowie was at the university from 1925 to 1950 in the Department of Anthropology.

Among the esteemed guests at Kishamish was Juan Dolores, a Tohono O’odham scholar, who spent the summers there. Dolores was one of the first linguists of the O’odham language who worked with Dr. Kroeber to study its grammar. Robert Spott, of the Yurok tribe, also spent summers at Kishamish.

Later Kroeber began to write his book Configurations of Culture Growth at Kishamish. During seven summers in Napa Valley he researched the book, which was published in 1947. He considered it to be among his greatest works.

Kroeber retired from the university in 1946. After “retirement” he taught at Harvard for a term, followed by a term at Columbia University. The family still spent their summers in Napa Valley. In 1951 he was honored by the American Anthropology Association on the fifty year anniversary of founding the UCB anthropology department.

In 1960 the 84-year-old and his wife were on the way home after a tour of European scientific meetings. Kroeber died in Paris in his sleep on Oct. 5, 1960. His obituary appeared in the St. Helena Star. “Dr. Kroeber left his mark on the University of California campus at Berkeley, where he was an institution for more than half a century … He was professor emeritus and director emeritus of the university’s museum of anthropology [Phoebe Apperson Hearst Museum of Anthropology]” wrote the Star. Burial was at Sunset View Cemetery, El Cerrito. Members of the family spend a considerable time here, wrote the Star.

Theodora Kroeber published the book "Ishi in Two Worlds" in 1961. The book received outstanding reviews with a full-page story in Time Magazine. The book probably came about during long conversations at Kishamish, which is still in the Kroeber family.

To this day Kroeber’s books are available for purchase, with 16 listed on the Barnes & Noble website.

Mariam Hansen is research director at St. Helena Historical Society. She can be reached at research.shstory@gmail.com.

Archaeologist John Holson will discuss “10,000 Years of a Changing Cultural Landscape in the Clear Lake Basin and Napa Valley” at 6:30 p.m. Tuesday, April 27.

Take a tour around Napa's historic Spencer House, located at 705 Seminary St. The house, divided into four units, was listed for sale for more…

Napa's Cambria hotel has been under construction for several years but in recent months work had stalled. However, contractors say work should…

Alfred Kroeber's "Handbook of the Indians of California," published in 1925, is a seminal work about California's native people.