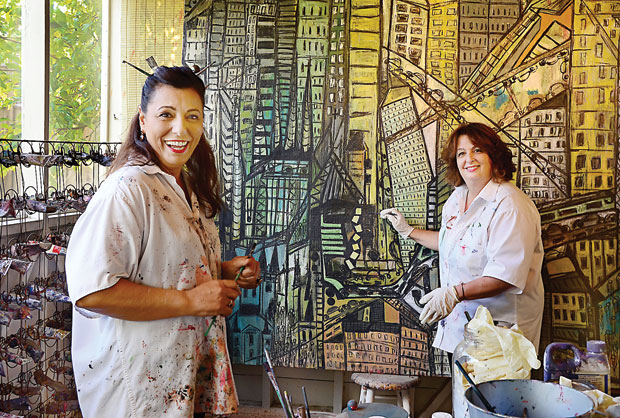 Moroccan artist Wafaâ Mezouar, left, during a light-hearted moment in the screened-in Charter Oak studio of St. Helena artist, Layla Fanucci. The internationally acclaimed artists are holding a joint exhibition of their recent work at the Robert Mondavi Winery in Oakville, November through December, with an opening reception from 2 to 4 p.m. Sunday, Nov. 18. In the background is one of Fanucci’s involved cityscapes, “City of the World.” Carolyn Younger photo 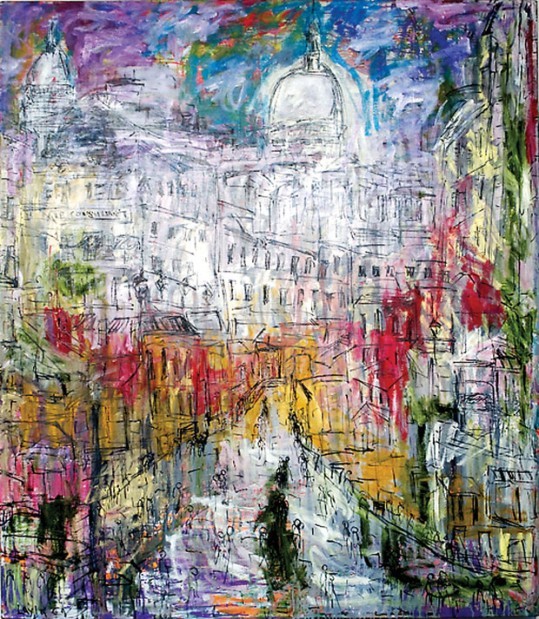 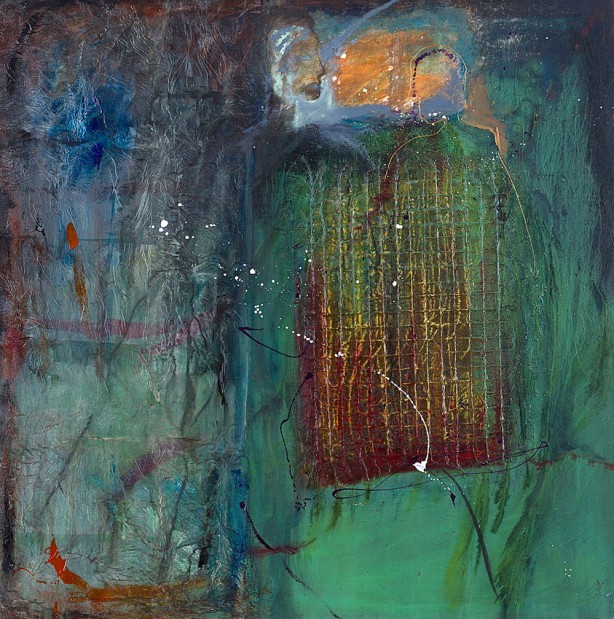 They are two artists with two different artistic styles — one textured and ethereal, the other structural and vibrant with color. They speak different languages and live and work on different continents

They will say, each in her own language, that these are superficial barriers to friendship.

Both are noted for their robust, infectious laughter. Both are thoughtful, accomplished and energetic artists with personalities that can fill any room they’re in.

Somewhere in their studios each has a well-used ladder because they both paint on canvases taller than the average man.

And in November and December they are exhibiting 10 to 15 examples of their most recent work at Robert Mondavi Winery.

Mezouar, with a sister, Amina Mezouar acting as translator, sat in the Fanuccis’ historic Charter Oak home/gallery/winery last week and talked about the unlikely friendship and the upcoming exhibition. Joining them was their mother, 86-year-old Fatima Naciri, also an artist.

Mezouar is a graduate of the Casablanca Institute of Fine Arts, who initially gained recognition for her work in the fiber arts, winning a gold medal at the Festival of Mahres, Tunisia in 1993 before switching to painting in acrylics and oils using historic natural pigments. (Their parents, the sisters said, made it clear that they and their nine siblings had no other option but to pursue a college degree or the equivalent.)

She earned a second gold medal for an entry in the Olympic Creative Cities Collection fine art exhibit in London this summer. The painting is on permanent exhibit in China’s Shanghai Museum. In between were awards from juried shows in France and the United States. Her work has been exhibited in Morocco, Britain, Germany, Spain, Mongolia, Washington, D.C., Birmingham, Ala., and Durham, N.C.

Although Mezouar lives and works in Casablanca, earlier this year she set up a satellite studio in the garage of her sister’s American Canyon home to work on paintings for the Mondavi show

Fanucci’s talents as a painter emerged 13 years ago when she was looking for a painting to fill a section of bare wall in the family’s Scott Street home.

The former music teacher couldn’t find what she wanted so she painted it herself. Before long — with no formal training to guide her — the walls were hung with her own bold still lifes and vibrant family portraits.

These were eventually joined, as space allowed, by her signature cityscapes — multilayered architectural visions of well-known cities inspired by friends’ travel photos from all over the world, even one taken from a helicopter buzzing over Paris.

Fanucci’s work has since appeared in Chuck O’Rear and Daphne Larkin’s book, “Napa Valley: The Land, The Wine, The People,” on the cover and in an article about her husband in SF State Magazine, and in the book, “Layla Fanucci: City of Dreams Unabridged 1999-2011,” published by Walter Wickiser Gallery.

She has exhibited in more than 200 shows from San Francisco to New York, Miami, Richmond, Va.; Andrews, N.C.; Sag Harbor, N.Y. and Toronto, Ontario as well as in the Napa Valley. She’s been interviewed on radio and television and her paintings are now part of more than 200 private collections.

Two years ago Fanucci had a solo, three-month show of 30 of her cityscapes at the Musée de Marrakech in Morocco. The colors and forms of her intricate paintings blended unexpectedly with the elegant Moorish design of the restored 19th century palace.

Behind the scenes, ensuring that all went smoothly, was Mezouar, whose own work was exhibited there the year before.

Fanucci’s paintings “were magnificent in the space,” Mezouar’s sister translated. “The goal is to get her back.”

The two artists met through Amina Mezouar, a client manager for the St. Helena branch of a local bank. In the course of meeting Fanucci’s husband, Rob (an attorney/winemaker), Mezouar learned about his artist wife and told him about her artist sister. On Wafaâ’s next visit to the States, Fanucci welcomed the sisters to her Scott Street studio and a friendship was forged.

When Rob and Layla Fanucci moved to his late grandfather, Guido’s home on Charter Oak — a registered historic site — and consolidated Layla’s studio and gallery with Rob’s winery and tasting room featuring his award winning wines, the Mezouars were at the opening reception to toast the new undertaking.

“Wafaâ has a very outgoing personality. [You see it in ] her character, her work, her joie de vivre,” Amina Mezouar said, explaining the artists’ friendship. “Layla is the same way. She expresses her style ... everything she has within. Layla has such an amazing way of reflecting the world by painting cities.”

Her sister, she added, is influenced by the beauty of life and by the women of Morocco. “She is devoted to translating their faces ...She had breast cancer and she ... worked with other women like her who had cancer and recovered. They are working to give hope to women ... The most beautiful way to express this is through her art.”

“Wafaâ is a huge artist with a huge personality and heart,” Fanucci agreed. “We get along well even though we don’t speak each other’s language.”

An opening reception for the exhibition of paintings by Wafaâ Mezouar and Layla Fanucci will be held from 2 to 4 p.m. Sunday, Nov. 18, at the Robert Mondavi Winery, 7801 St. Helena Highway. The reception will be followed by a wine tasting of Charter Oak Wines and appetizers from Morocco from 4:30 to 6:30 p.m. at Charter Oak Winery/Art Studio, 831 Charter Oak Ave. in St. Helena. Both are open to the public.

Moroccan artist Wafaâ Mezouar, left, during a light-hearted moment in the screened-in Charter Oak studio of St. Helena artist, Layla Fanucci. The internationally acclaimed artists are holding a joint exhibition of their recent work at the Robert Mondavi Winery in Oakville, November through December, with an opening reception from 2 to 4 p.m. Sunday, Nov. 18. In the background is one of Fanucci’s involved cityscapes, “City of the World.” Carolyn Younger photo