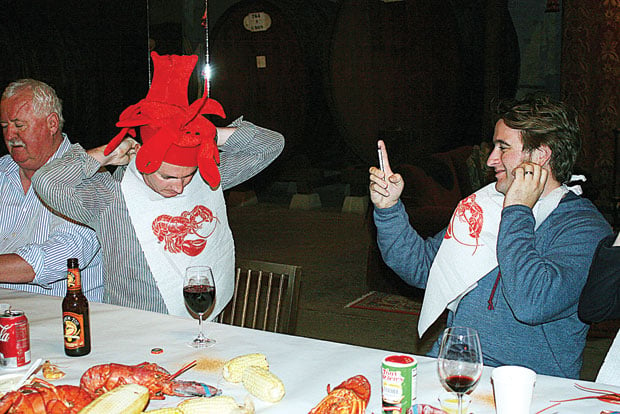 Chris Morisoli puts on a plush lobster hat to pose for Chris Hall. At left is Ray Coursen. About 50 friends and relatives attended a lobster feed at Inglenook welcoming Morisoli back from serving as a U.S. Army medevac pilot in Afghanistan. Jesse Duarte photos 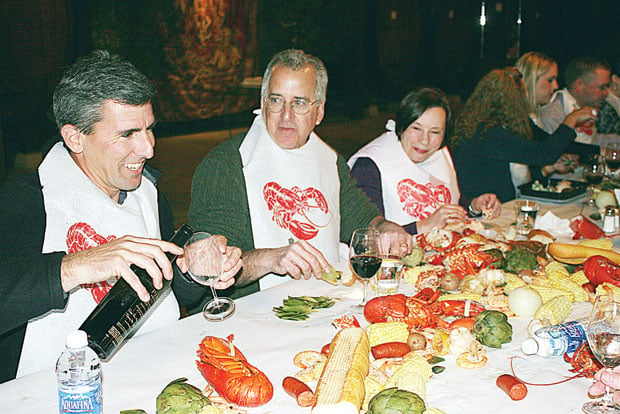 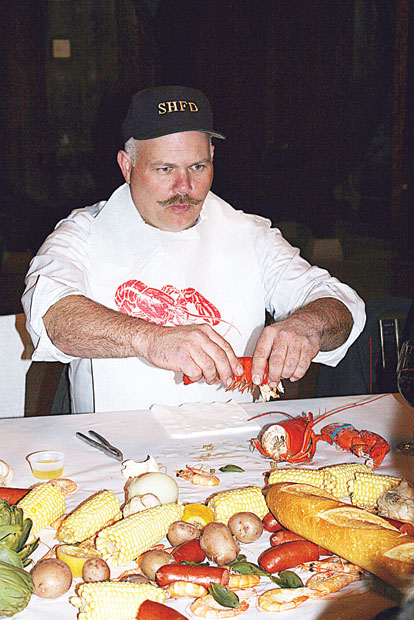 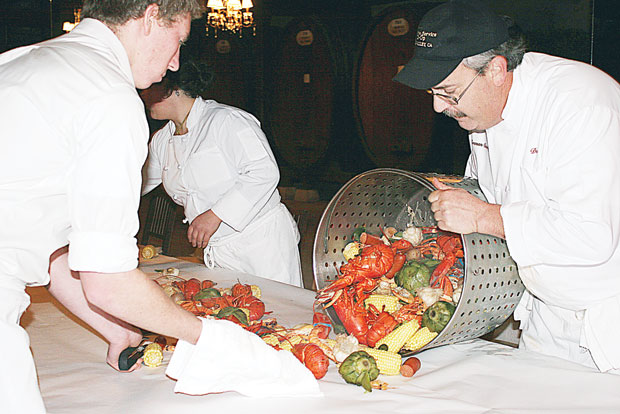 • A soldier’s return from a war zone, in Morisoli’s case Iraq and then Afghanistan, calls for a party;

• Morisoli was a member of the volunteer Rutherford Fire Department;

The logical flaw in that whole set-up — that Morisoli just can’t stand lobster — only added to the fun as 50 of Morisoli’s friends and relatives feasted on lobster in the Inglenook barrel room while Morisoli chowed down on a burger from Rutherford Grill.

“I guess that says something about who the feed’s for,” said former Rutherford Fire Chief Ron Wicker.

Pat Brown, a friend who organized the dinner, said it was “kind of hard to cut it down to 50 people. We could have had literally hundreds of people who know him.”

For Morisoli, the dinner was a chance to see old friends he hadn’t seen in two years. He’d spent the first five days of his leave “mostly hanging out with my parents, some friends and family; just trying to catch up with people.”

Guests recalled watching the St. Helena High School grad grow up from a precocious teenager who was so fascinated with firefighting that he owned his own scanner to a seasoned serviceman who piloted UH-60 Black Hawks in and out of combat zones to evacuate wounded servicemen and civilians.

Morisoli’s aunt, Marlene Eisan, remembered him wrestling with his dog Buster and hanging out with a friend who shared his interest in homemade pyrotechnics.

“They’d build these things and put them in the yard, and you’d never know where you could walk without setting off these fireworks,” she said. “But overall Chris was a great boy, a great student — never any trouble to his parents.”

“He was a good kid,” agreed uncle Mike Morisoli. “Always running around on four-wheelers, helping with anything he could — the typical all-American kid.”

At the age of 14, he was already a de facto member of the Rutherford Fire Department.

“He hung around and hung around until the day he turned 18 and put his application in,” said Wicker, who served as chief for 16 years before handing the reins to Davie Piña a few weeks ago. “He had a lot of enthusiasm for the department.”

“It’s been fun to see him grow up,” said CalFire firefighter Mike Parkes. “When he was 14 years old he was this baby-faced kid. He’s still a baby-faced kid, but now he’s a man.”

Morisoli rose through the ranks until he was named the executive officer of his unit, which was featured by CBS News as well as Stars and Stripes, the official newspaper of the U.S. military. The Stars and Stripes article, reprinted in the Star last September, tells of Morisoli and his crew flying into a firefight in southern Afghanistan and dodging RPGs and small-arms fire to rescue a soldier who’d lost his legs.

“Every time you read the news or hear a helicopter went down, it’s very, very scary,” Eisan said.

Mike Morisoli said his nephew doesn’t like to talk much about his missions. “I just always keep in mind that he’s doing what he loves. He’s serving his country and doing good things. And now he’s home, which is great.”

Wicker, who’s a pilot himself, has seen some of the videos Morisoli’s sent home. “I’ve watched some of the stuff he does with a helicopter, and it’s pretty incredible,” he said.

The 27-year-old Morisoli was all smiles Sunday, joking around and mugging for pictures in a big plush lobster hat.

Morisoli will be home on leave until March 3. Then he’s off to Fort Wainwright in Alaska, where his unit is based. He’ll stay there for most of the next year, and he’s not sure about his plans after that.

This was actually the second lobster feed in Morisoli’s honor; the first was held when he was back from Iraq in January 2010. That time he was joined by 25 buddies from his medevac unit. On a memorable Thursday morning, six Black Hawks flew over St. Helena on their way from Travis Air Force Base to Fort Lewis in Washington state.

“This is the first time I’ve seen a lot of these people since then,” Morisoli said Sunday. “So this is great, just a lot of fun.”

Chris Morisoli puts on a plush lobster hat to pose for Chris Hall. At left is Ray Coursen. About 50 friends and relatives attended a lobster feed at Inglenook welcoming Morisoli back from serving as a U.S. Army medevac pilot in Afghanistan. Jesse Duarte photos