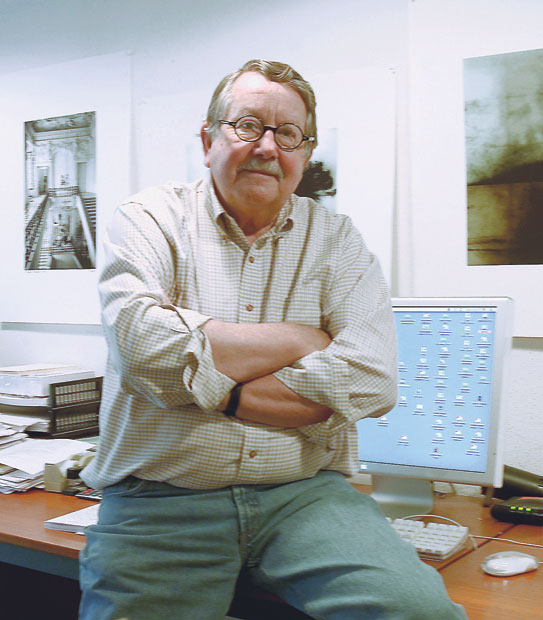 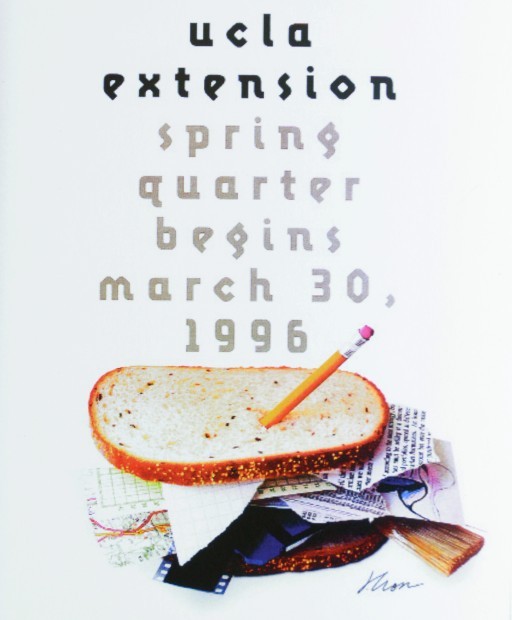 Cross' visual solution to portraying the many UCLA Extension programs. The image appeared on the spring 1996 catalog cover and poster. 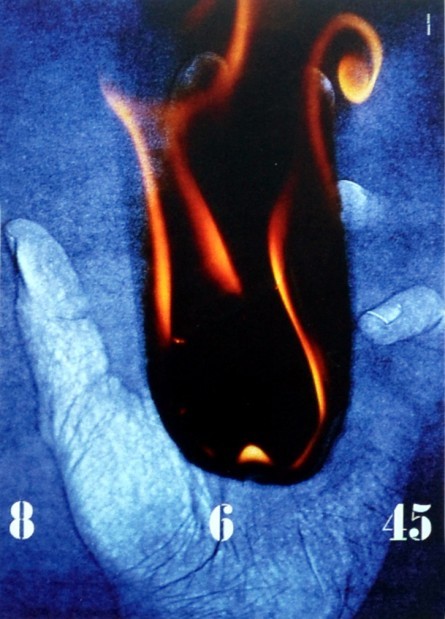 A poster commissioned by the Hiroshima Peace Museum in Japan,  memorializes Aug. 6, 1945, the day the atomic bomb was dropped on Hiroshima. 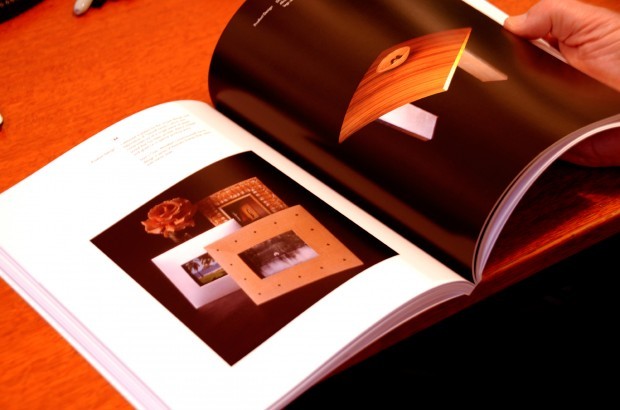 Included in Cross' book, "Metaphor," are some of his personal inventions and designs such as the paper photo frames, left, and a table top of African zebrawood, right, set on galvanized metal legs. Carolyn Younger photo 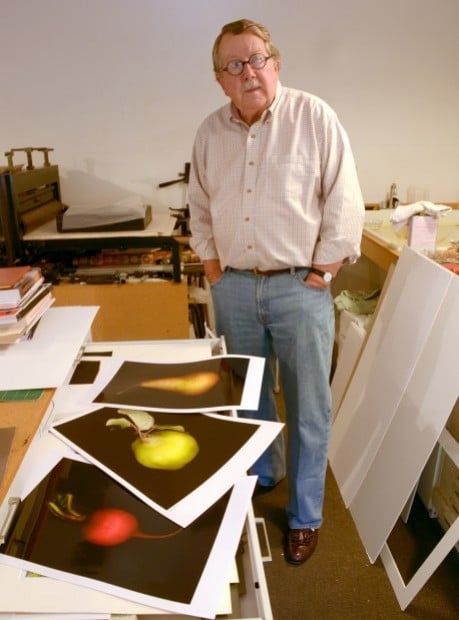 Jim Cross in his studio with examples of some of his fine art photography. Carolyn Younger photo

Chances are local residents have come across the products of Jim Cross’ fertile imagination and not realized it.

That Acura parked on Main Street, for instance, sports an emblem designed by his old firm, Cross Associates.

Over the years he and his company also turned traditionally mundane annual reports into visual works of art.

The award-winning designer recently compiled a retrospective of some of his commercial as well as personal projects — fine art photographs, prints, etchings and drawings and several inventions — in a book, “Metaphor: Fifty-Five Years of Work and Play.”

It wasn’t an easy task.

Cross, 77, has been a graphic designer since his student days at UCLA. By 1956 his career was off and running as graphic design director for the System Development Division of the Rand Corporation.

Eventually the Pasadena native would open three offices of his own — one in San Francisco, others in Los Angeles and Newport Beach.

“The book was an idea I had a couple of years ago about leaving something with my daughters and my grandchildren,” the St. Helena resident said. “You go through life and your kids see some of what you do ... but they don’t have anything tangible that says, ‘Here’s what Dad does or did.”

He also gave the book to a few friends and current clients and was surprised at the response.

The book’s title, “Metaphor,” reflects Cross’ approach to finding design solutions. When UCLA commissioned him to create a 1996 catalog cover and poster for its spring extension programs, the result was an image that incorporated part of a stock market page, a CD, a strip of film and a paint brush among other things, layered between two slices of rye and secured by a No. 2 pencil.

“In one image there are all the things representing different schools in the university — film, painting, poetry, business and economics,” Cross said last week. “I made a sandwich because a university is filled with all these wonderful things.”

Sitting in his studio, flanked by the electronic equipment he uses to create his commercial designs and fine art pieces, Cross talked about the emergence of computers — the first one he came across was run by the Rand Corporation and larger than his current home — and the digital age.

It’s a far cry from the days he and his father, a commercial artist and illustrator, would paint plein air landscapes together on weekends. But once young Cross gave up the idea of becoming a dentist — Latin and chemistry weren’t his strong suit, he joked — art seemed a natural path. He followed his high school art teacher’s recommendation and attended the UCLA school of fine art.

After graduation he became the Rand Corporation’s lone graphic designer and was soon heading an art department of nearly 20 people. While he was there he put together annual reports, security posters and learned about computers. From Rand he went to the Northrup Corporation where, as corporate design director he designed the airplane manufacturer’s corporate annual reports, designed exhibits for their airshows and wrote their capability and scientific brochures.

Cross was 29 when he went to work for himself and opened his own office.

“When you’re young you don’t know any better,” he said, and laughed. “As an artist you’re expected to think outside the box. I could go in and talk to the engineers who had no talent in the way of design and I was the expert, even at that age.”

Cross and the other designers in his office began entering and winning the design competitions sponsored by such groups as the American Institute of Graphic Arts and the Artists Club of Los Angeles — as many as 20, 30 and 40 awards a year, he said, and their reputation grew.

“We were always exploring, experimenting with inks, with printing presses and papers,” he recalled. “Those days were really a lot of fun.”

Years later he and his late son, also Jim, would take off on a photo shoot with a professional photographer for an annual report Cross was putting together for Computer Automation.

“They were opening offices and taking computer products to the East Coast and Europe ... So I took my son with me to Los Angeles, New York, Dublin,  London, Paris and Heidelberg. We shot the computers under the Brooklyn Bridge, at Notre Dame Cathedral and the Houses of Parliament in London.”

Those who imagine Cross spent most of his time mulling over design problems, would be wrong. In addition to serving on numerous boards, he has been a teacher, a lecturer at Smithsonian Institute and Tokyo School of Design, associate professor at UCLA, adjunct professor at Arizona State University, a judge in design competitions, held one-man shows of his drawings and prints and been part of several group shows, as well as curated the Napa Valley Museum’s eye-popping “Art & Wine — The Expressions of an Industry” last year.

He was named international president of Alliance Graphique Internationale, holds the Art Directors Club of Los Angeles Lifetime Achievement Award, the American Institute of Graphic Arts Legacy Medal and appears in “Who’s Who in Graphic Design.”

Eventually James Cross Design became Cross Associates until being purchased in 1988 by the British firm, Saatchi and Saatchi, and was folded into a  New York-based affiliate to become  Seigel+Gale/Cross. Cross stayed on as managing and creative director until 1994.

Following a move to St. Helena in 1996 it wasn’t long before he took on a new creative endeavor. He and his wife, Sue, are the proprietors of Cross Cellars. Using grapes from the Kelleher family vineyards the couple makes a Cross Oakville Cabernet Sauvignon found in more than 20 California restaurants and wine shops.

At a time when most men would be retired and working on their golf game, Cross continues take on commissions for wine labels, winery brochures and logos, and works on his personal fine arts projects.

He hasn’t forgotten past colleagues, however. His book acknowledges and names the men and women, “without whom the work in this book could not have been accomplished.”

He is a member in good standing of the Design- osaurs Club, based in Los Angeles, all guys in their 70s, and flies down to join them for lunch every so often.

If Cross’ life were to be summed up metaphorically, it could easily be portrayed as a sandwich of gigantic proportions — a Dagwood style sandwich — with a giant bite taken out of it.

Cross' visual solution to portraying the many UCLA Extension programs. The image appeared on the spring 1996 catalog cover and poster.

A poster commissioned by the Hiroshima Peace Museum in Japan,  memorializes Aug. 6, 1945, the day the atomic bomb was dropped on Hiroshima.

Included in Cross' book, "Metaphor," are some of his personal inventions and designs such as the paper photo frames, left, and a table top of African zebrawood, right, set on galvanized metal legs. Carolyn Younger photo

Jim Cross in his studio with examples of some of his fine art photography. Carolyn Younger photo