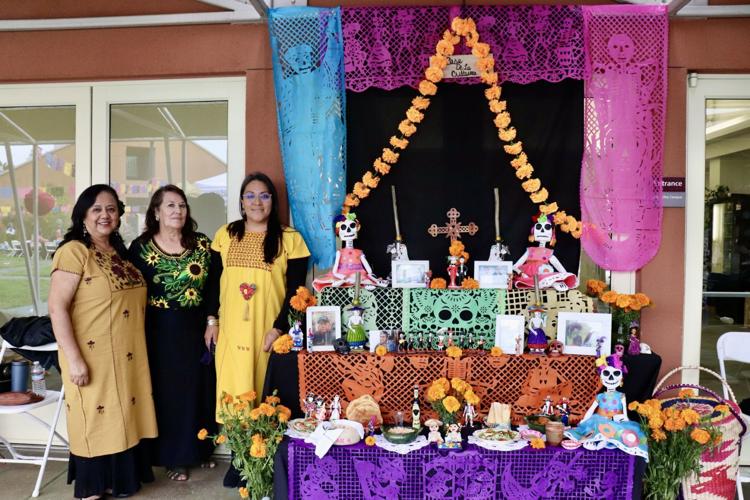 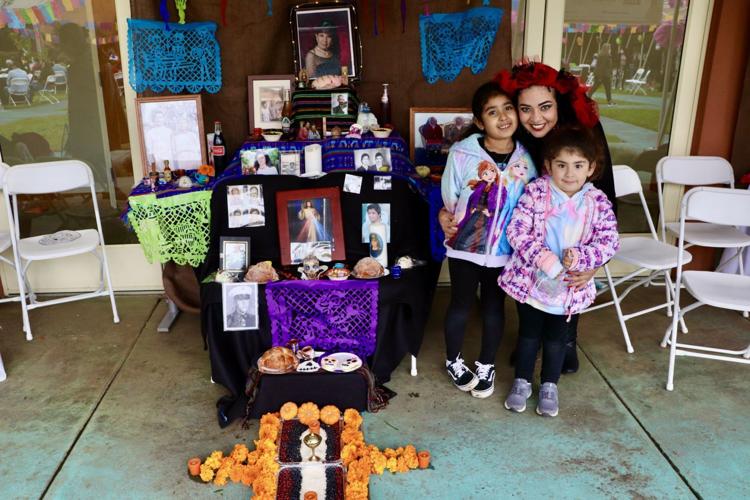 Calistoga resident Irene Peña with her daughters Alexandria, left, and Dayana. Peña built an altar honoring her and her husband's departed loved ones. 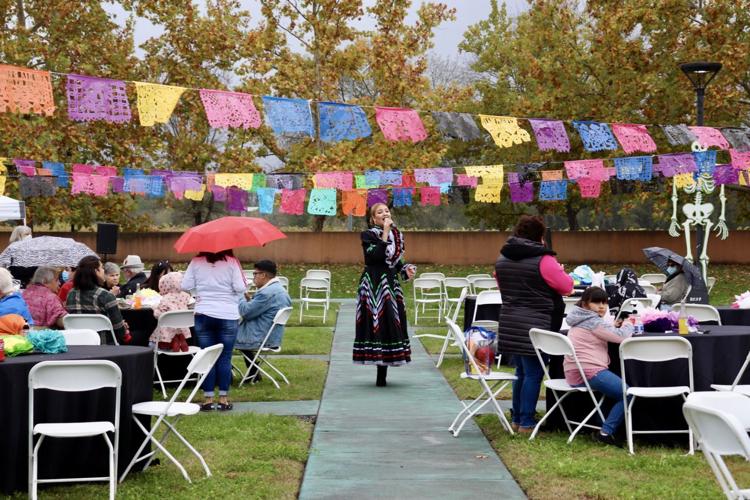 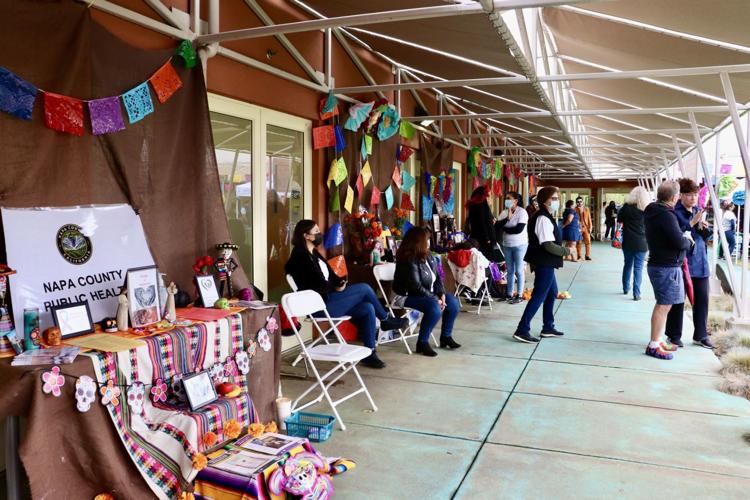 Día de los Muertos is celebrated by building altars honoring loved ones who have died. 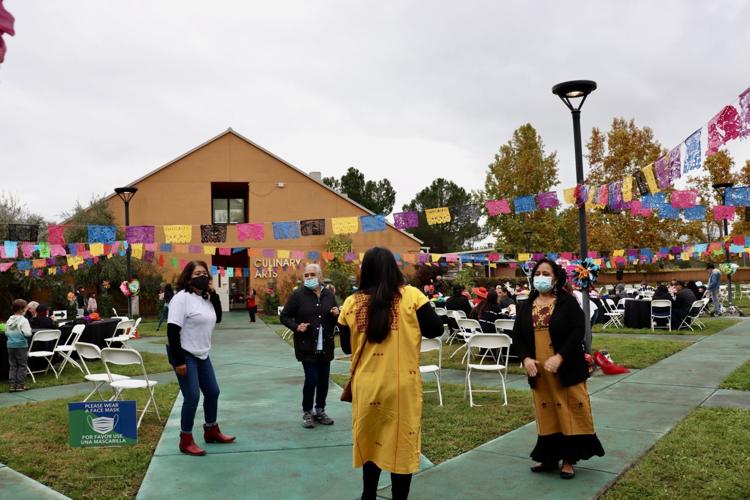 Hosted by the Up Valley Family Centers and Nimbus Arts, one of St. Helena's most popular cultural events went on hiatus last year due to wildfires and the effects of COVID-19. This year's event represented the community’s resilience after a couple of challenging years.

Pre-coronavirus celebrations featured face-painting stations for kids and adults, as well as food stations at each corner of the campus lawn. Though this year’s celebration had to look a bit different to allow for safe gathering, the flow of it remained about the same.

Día de los Muertos (Day of the Dead) is a pre-Columbian Mexican holiday that honors life, death, and the memories of those no longer with us. For many years now, St. Helena has joined in this time-honored tradition, taking this holiday as an opportunity to bring neighbors together and celebrate cultural diversity, usually on the Sunday prior to Nov. 1 and Nov. 2, as those are the official holiday dates.

Many of the altars this year were set up by sister organizations which offer diverse relief programs in the county. Some of the organizations that set up altars were Napa County Public Health, Ole Health, CHI, Saint Helena Community Band, and Nimbus Arts. Besides using this opportunity to honor loved ones who had passed away, or friends of coworkers who are no longer here, there was information about community programs available in Napa County.

During previous years, more community members set up altars at the event. This year only a few participated.

Lorena Martínez and Alicia Pimentel, members of La Casa de la Cultura, spent about two hours setting up their altar. On the first level of their altar, they honored their deceased loved ones since that level is believed to be closer to the heavens. The second level is for their favorite food as it represents the earth. The third and last level is used for candles, representing purgatory.

They used two colors for their punched paper: Purple, representing death, and orange, representing life. They used orange marigolds, which are said to call the dead from where they are with each petal that falls off.

Irais López, leader of La Casa de la Cultura, said Calistoga mothers created the group around 2009 when their kids had little to do during summer breaks. In Mexico, it is common to find a cultural building in each town known as La Casa de la Cultura, where kids are exposed to art, music, dance, poetry, and other nurturing programs.

Organizers of La Casa de la Cultura began with their own kids and soon grew to 122 children by the end of their first summer. The program ran for about five years, but now that the kids have grown, they still try to keep in touch.

“We still have that sense of union and every time there is an opportunity we gather together,” López said.

“Now we have grandchildren and we’re looking into reviving the program,” López said.

Irene Peña, a longtime Calistoga resident, also built an altar for Sunday's event. Her method was slightly different, as she added her husband’s loved ones as well.

“I have a mixed family now, so at the top, I decided to have my mother who I lost last December and was everything to me," Peña said. "Then, I have my two sets of grandparents and my uncles who helped me become the person I am today. On the next level I have my husband’s aunts and his grandparents, and a coworker of mine who I loved dearly with her brother who died in the Vietnam War next to her."

Altars are not just for the people we knew, but for anyone who we cared about and is no longer here.

“I also added my idol, Pedro Infante!” Peña said. Infante was a well-known Mexican singer and actor from the Golden Age of Mexican cinema.

“I like to do this because I want to continue with my traditions and because I also want my daughters to know. This is the first year that they’ve helped me set up,” Peña said. “I also think it helps with the grieving of seeing your loved ones go."

At the end of the event, the UpValley Family Centers and Nimbus Arts offered heartfelt words of gratitude, officially announcing Rosa Cachu’s retirement. As Community Outreach Specialist and leader of the family centers' early learning Niños Activos playgroups, Cachu worked with more than 200 children and their families, arranging multiple activities that nurtured the early development of children in the community over the course of 23 years at the UpValley Family Centers.

These New Tech Spanish class students are making a quilt to celebrate their heritage. Check it out.

The name of the dual-language academy that debuts in August 2022 is meant to call to mind unity – of two languages and different student bodies.

The St. Helena Public Library staff wants to spread the word that the library is now fully open.

A large public menorah in St. Helena is being lit each night during the eight nights of Hanukkah. It began on Nov. 28 and will end on Dec. 6.

Calistoga resident Irene Peña with her daughters Alexandria, left, and Dayana. Peña built an altar honoring her and her husband's departed loved ones.

Día de los Muertos is celebrated by building altars honoring loved ones who have died.