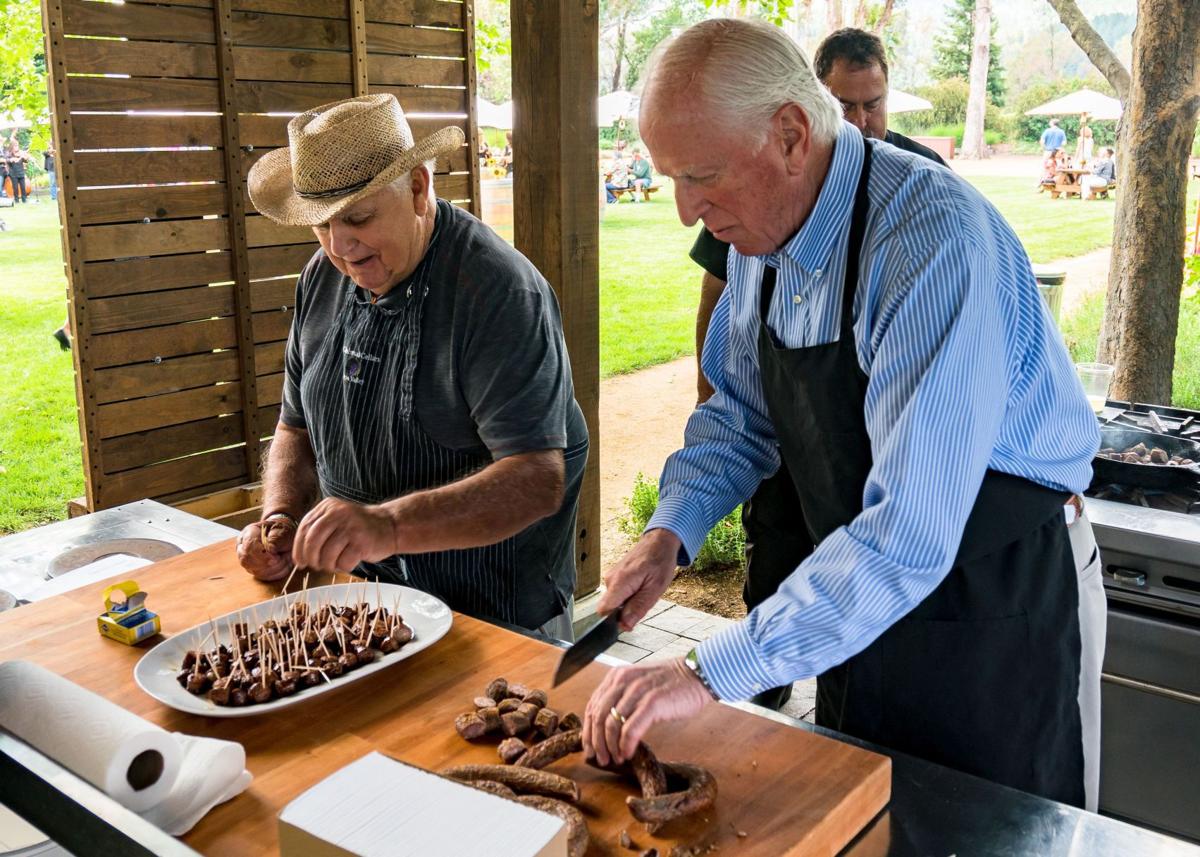 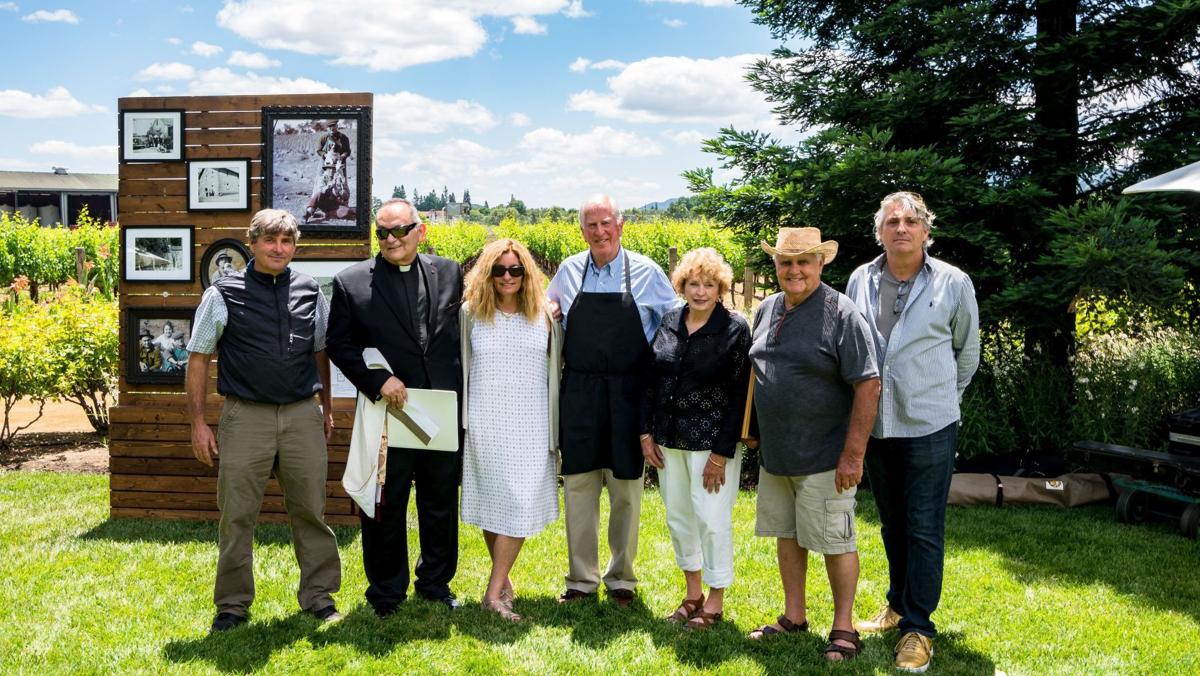 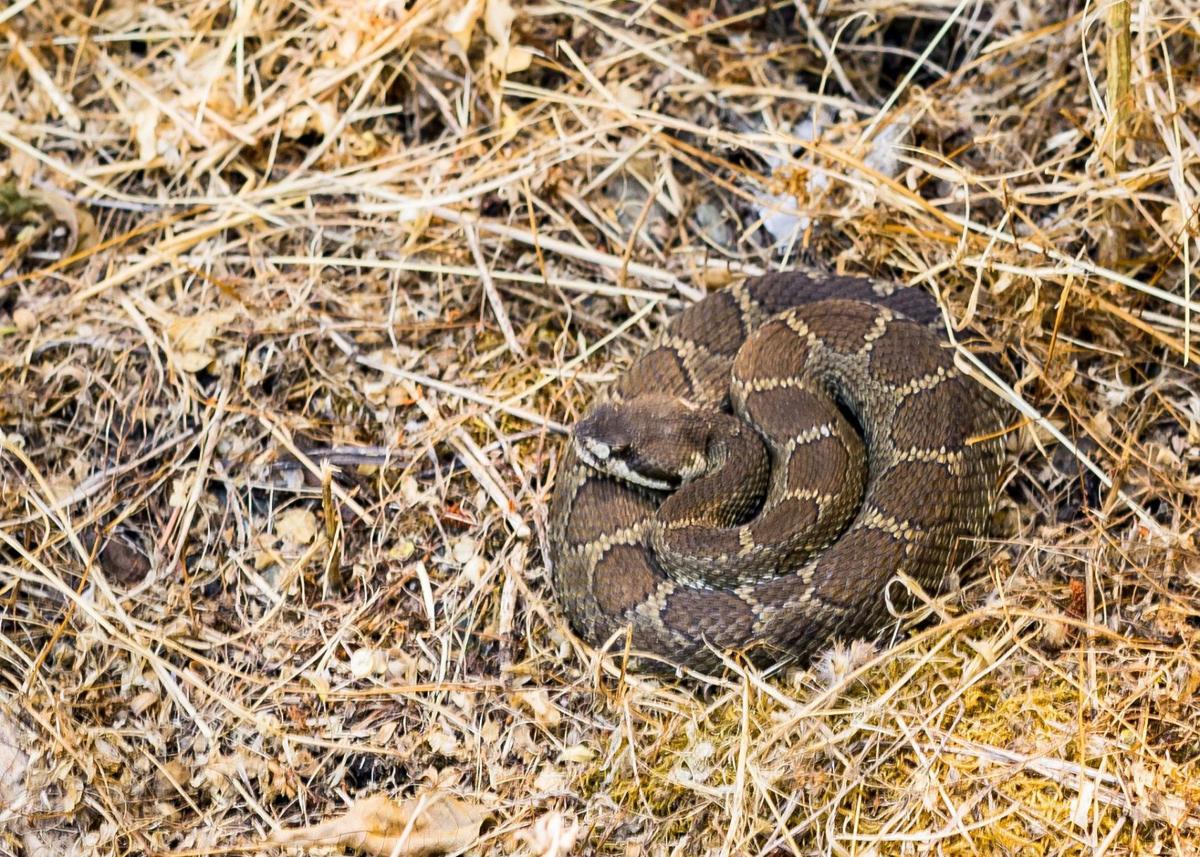 A western rattlesnake guarding the old Pestoni family winery in Bell Canyon on the slopes of Howell Mountain, just northeast of St. Helena. 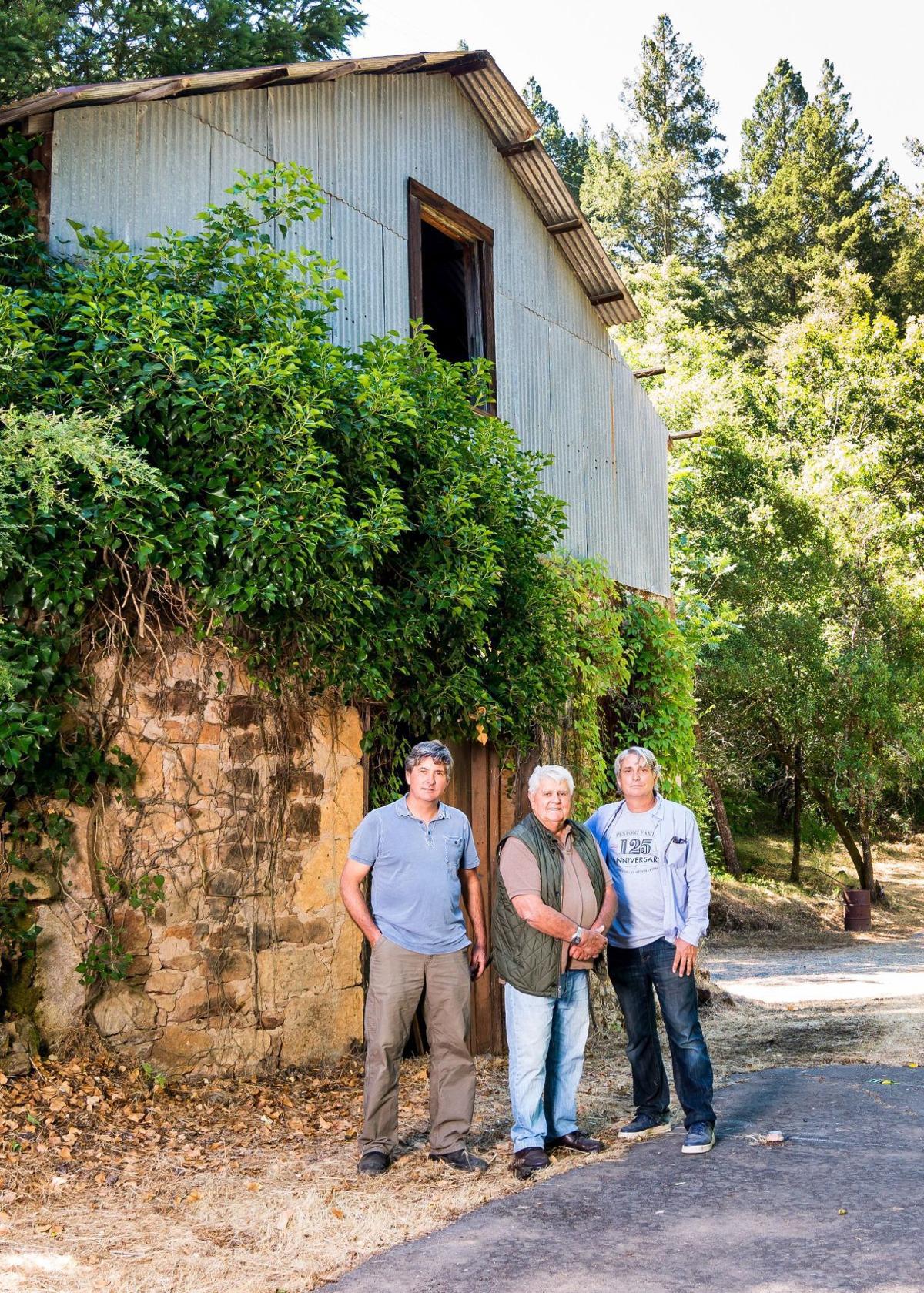 Andy, Bob and Greg Pestoni in front of their ancestors’ winery near Bell Canyon outside St Helena. 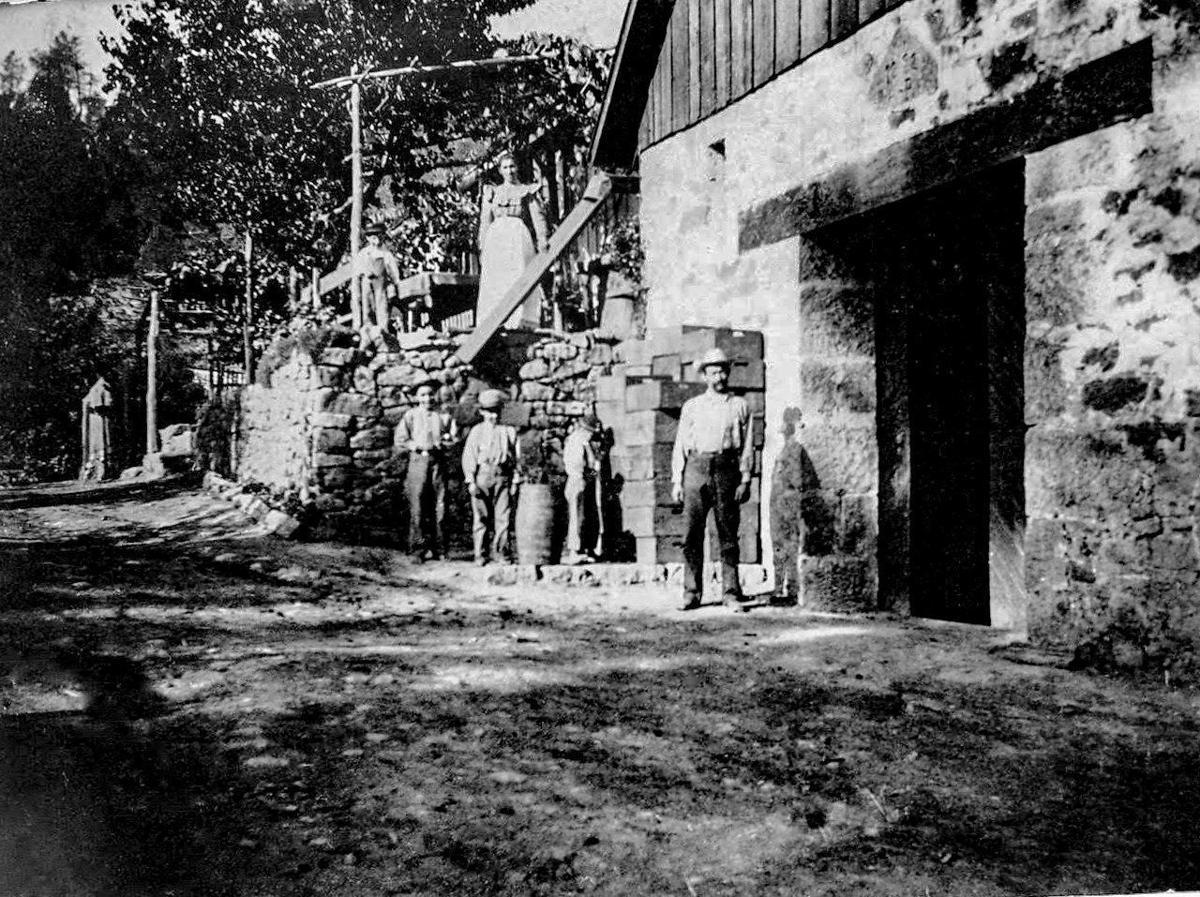 Albino Pestoni with Maria and children in front of the original winery in 1897. 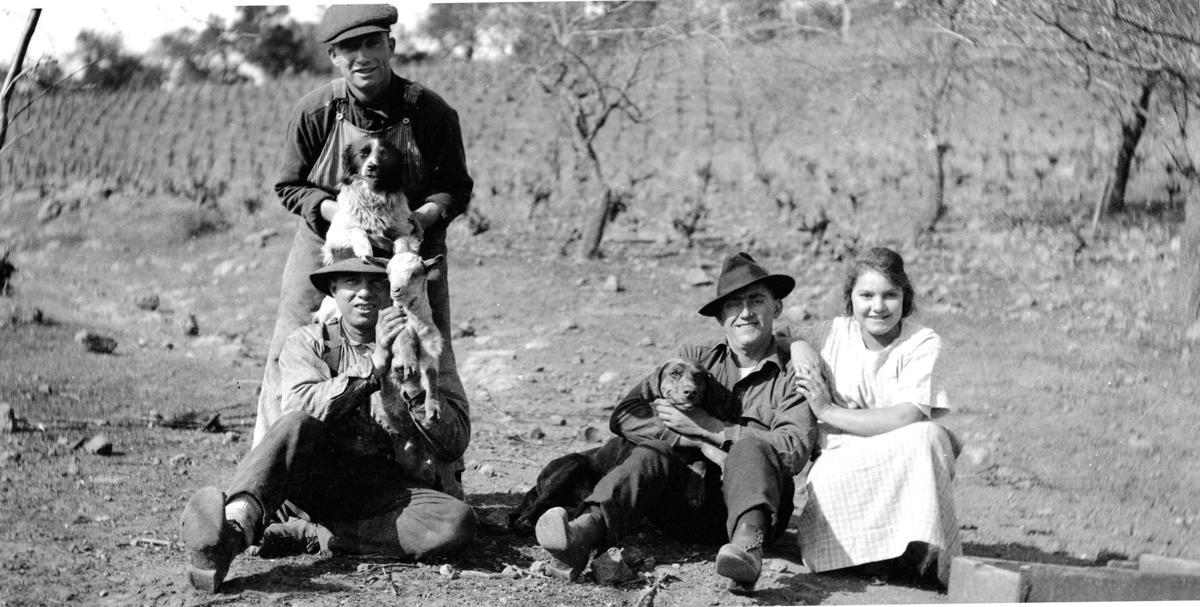 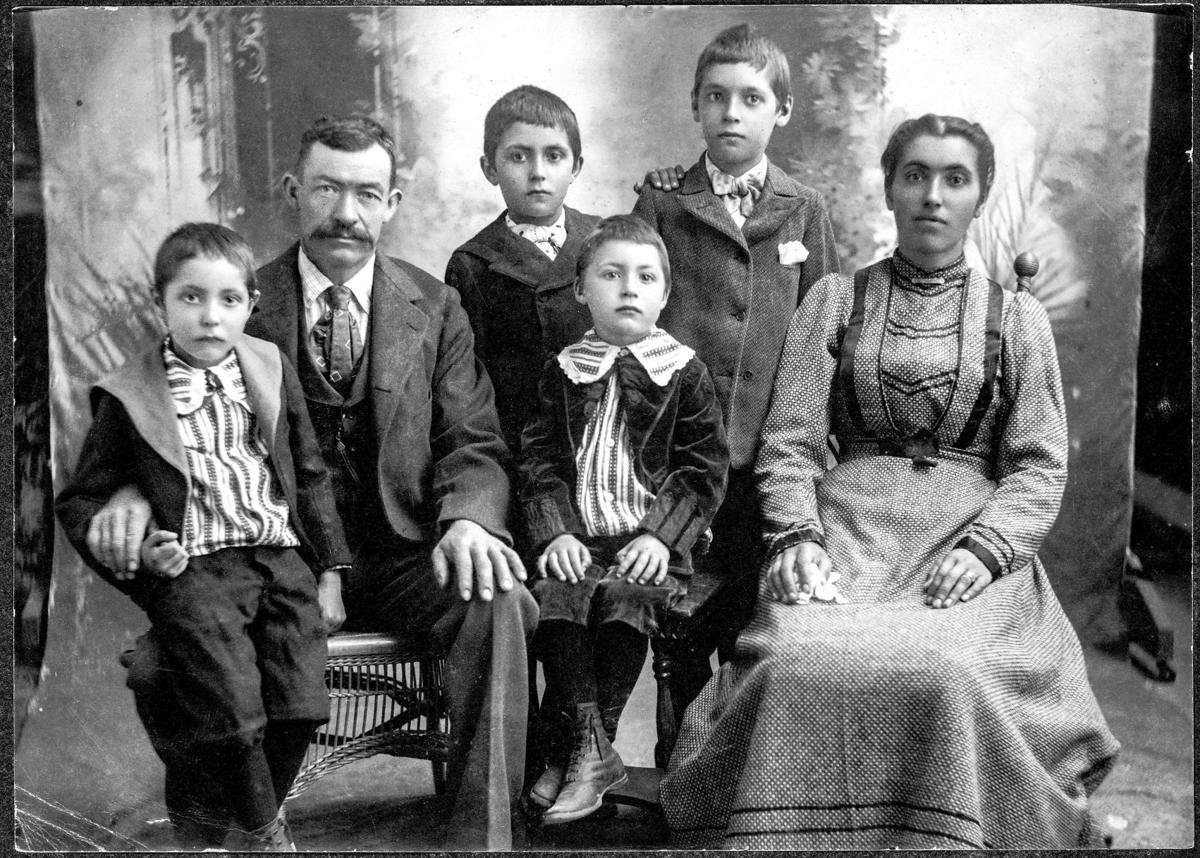 The Pestoni family in the late 1890s: From left, Angelo, Albino, Henry, Jack Frank and Maria.

A western rattlesnake guarding the old Pestoni family winery in Bell Canyon on the slopes of Howell Mountain, just northeast of St. Helena.

Andy, Bob and Greg Pestoni in front of their ancestors’ winery near Bell Canyon outside St Helena.

Albino Pestoni with Maria and children in front of the original winery in 1897.

The Pestoni family in the late 1890s: From left, Angelo, Albino, Henry, Jack Frank and Maria.

I heard the rattlesnake before I saw it.

Bob Pestoni and his two sons, Greg and Andy, had taken me to their ancestors’ abandoned homestead and stone winery that had been built in 1892 on the slopes of Howell Mountain, just above Bell Canyon Reservoir. We were there to talk about the Pestonis’ 125 years — five generations — of winemaking in the Napa Valley and their recent name change from Rutherford Grove Winery to Pestoni Family Estate Winery, but all I was thinking at that moment was how to avoid being bitten.

“Bad year for rattlers,” Bob said. “All these stone structures make for some pretty good cover.”

I nodded and stepped gingerly out of what I hoped was the snake’s strike zone.

We stood within a rectangle of hand-hewn stones that had been the ancient house’s foundation, which directly linked to the adjacent winery walls — still standing, albeit crumbling.

“Our great-great-grandfather, Albino Pestoni, had come from the Ticino area of Switzerland in 1883,” said Greg, Bob’s youngest son, general manager at the winery and keeper of the family’s history. “He worked their vineyard until he and his wife, Maria Madonna, had enough money to build his own winery in 1892.”

By the early 1900s the winery was beginning to get noticed. Albino and Maria’s wines had become popular, especially with other Swiss Italians.

“The wines were probably real family-style back then,” Greg said. “And people loved them, traveling from San Francisco to buy bottles or filling their own jugs directly from barrels at the winery. Those wines were grown and made right on the property, just like many single-vineyard estate wines of today. They really marked the beginning of artisanal winemaking in the Napa Valley.”

Their business prospered until 1920.

“When Prohibition went into effect they were forced to sell,” Greg said. “My grandfather Henry was one of four sons, and he eventually married Lena Domingos from a Portuguese family that had immigrated to the Napa Valley from the Azores and had a property on Howell Mountain, too.”

Times were tough, and Henry and Lena, joined by her brothers, Alfred and Manuel, worked in the vineyards planting and helping manage vineyards throughout the upper Napa Valley.

“This experience taught them all about soil, sunlight and rootstock,” Greg said, “But the most valuable lesson they learned was to make sure to plant the right grape in the right place.”

In 1923, Lena and Henry purchased what is known today as the Pestoni Ranch on Whitehall Lane. There Henry and Lena farmed and made a little brandy and sherry on the side.

“Lena’s brothers bought the dormant Ehlers Estate and bootlegged out of it during Prohibition,” Greg said. “Then it went legit in 1933, when Prohibition ended. They named it the Bale Mill Winery. They eventually sold the building in 1979 when Alfred died.”

By that time Henry and Lena’s sons, Bob and his brother Marvin, briefly parted from their family’s farming and winemaking heritage and instead, in 1963, started the Upper Valley Disposal Service, becoming the refuse hauler for the upper Napa Valley. By the early ‘70s the brothers had become pioneers of recycling winery byproducts, separating the material for recycling. But they were eventually drawn back to winemaking and farming, planting grapes and raising livestock, including pigs.

“The first time I bought pigs I was sold some wild ones,” Bob said. “So when we got them home and put them in their pens they just jumped the fence and ran into the woods. We never saw those pigs again, but I sure learned my lesson — never buy pigs from that guy again, and always check to see if the pigs are wild.”

“We have some pretty special pigs that go into our family’s secret sausage recipe,” said Andy, who is winemaker at the winery. “Those were the sausages that Mike Thompson was cooking up at the recent 125th celebration.”

Andy was referring to an earlier event that was held at their winery in Rutherford, not too many miles from where we stood. At that event local Congressman Mike Thompson was behind a large grill frying up juicy sausages.

“When I was young I used to help feed the pigs at this ranch,” Thompson said. “Now Bob’s got me cooking up pork sausages — looks like I’ve come full circle.”

Thompson and other local dignitaries, including Napa County Supervisor Diane Dillon and St. Helena Mayor Alan Galbraith, had come to the winery to help celebrate the family’s 125th anniversary of winemaking and their recent name change.

After cooking up sausages Thompson addressed the crowd and presented the family with a plaque.

“I am honored to have submitted a statement in the Congressional Record recognizing the Pestoni family’s 125 years of winemaking in the Napa Valley,” he said. “Bob Pestoni is an extremely hardworking man, and he and his family do so much for our community.”

The Congressional Record is the official record of the proceedings and debates of the United States Congress, published by the United States Government Publishing Office and issued when Congress is in session.

A section of the official record now reads:

“After many years of growing wine grapes for other wine producers, Mr. Pestoni and his wife, Sylvia, opened the doors of Rutherford Grove Winery in 1994. This year, in celebration of their family’s 125th anniversary of Napa Valley winemaking, the winery was renamed Pestoni Family Estate Winery.

“Bob Pestoni and his family before him have made single-vineyard handcrafted wines for 125 years. They are my friends. I am proud that this hardworking man and family do so much for our community. It is fitting and proper that we honor them here today.”

According to Andy, they changed their name to Pestoni Family Estate Winery to better reflect their deep roots within the region.

“When we opened Rutherford Grove 25 years ago the name Rutherford was not nearly as diluted as it is today,” Andy said. “Not that it’s bad — but other wineries and entities with the name Rutherford in them have grown a lot since then, and it’s confusing to our customers. I answered the winery phone not long ago and a woman asked me if we were still serving ostrich burgers. ‘Oh,’ I said. ‘We’re Rutherford Grove, not Rutherford Grill.’ By using our family name we tell our family story — a tale of ‘hands-on’ Napa Valley estate winemaking. And this, we think, expresses our Rutherfordness more clearly.”

The three Pestonis talked as we toured the old winery site. When we returned to where the rattlesnake had been, it had gone, slipped into some crevice within the nearby rocks, I supposed. I wondered to myself how dangerous and hard it must have been to have lived in what remains a remote place more than 100 years ago.

“We are hoping to disassemble and then reconstruct this old stone winery at our Rutherford property,” Greg said. “It’s only 1,000 square feet, so it would largely be symbolic, but we don’t want this piece of history to just fade away. To us the building not only marks the beginning of our family’s history here in the Napa Valley, but it also represents the kind of DIY ethos that we value. My great-grandfather arrived here with nothing but the will to make wine. For us, winemaking is not a business — it’s our heritage.”

Recycling is more important than ever for Upper Valley Disposal Services

It all began with the hogs. Bob Pestoni came home from the service to help with the family farm in 1959. He added hogs to the farm on Whitehal…