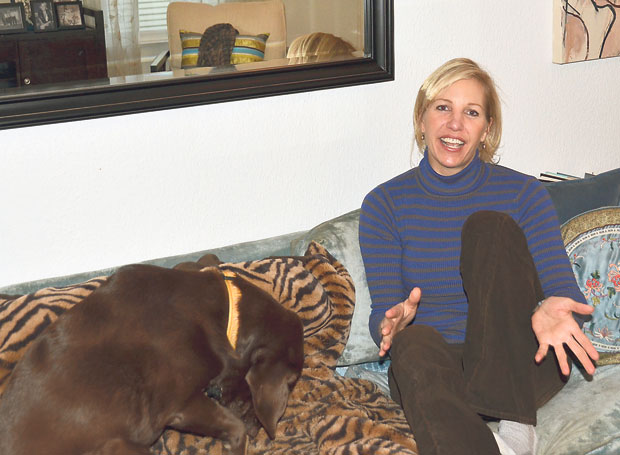 Kelly Amis talks about her next film and book projects as her four-legged pal, Bella, settles in to join the conversation. Carolyn Younger photos 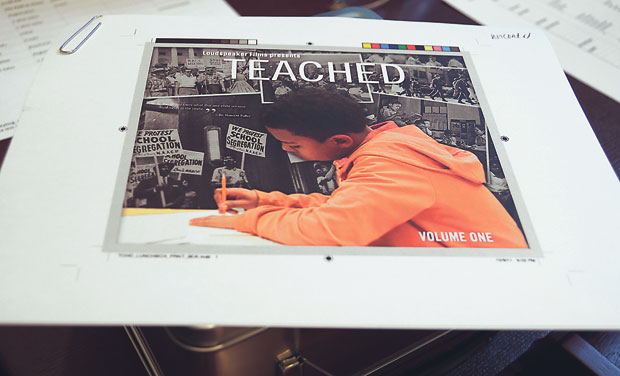 A still from “Teached.” 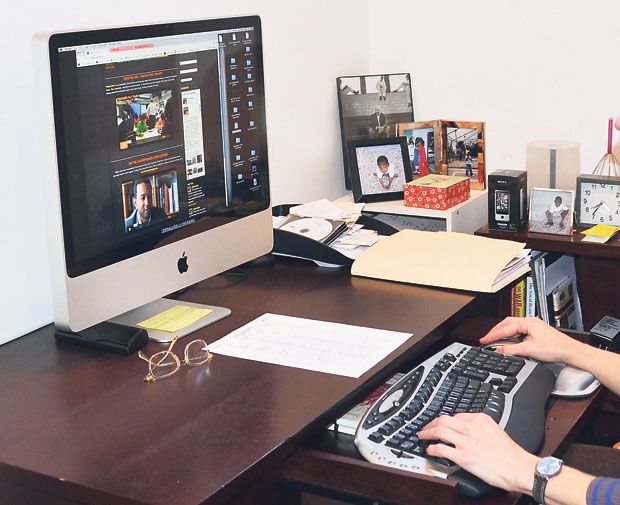 In the “nerve center” of Amis’ Deer Park home, the filmmaker brings up the website dedicated to “Teached,” her first film, which appeared in November’s inaugural Napa Valley Film Festival.

As with most life paths, Kelly Amis’ has taken a circuitous and often unexpected route.

In college, the Nebraska native, who grew up in a town one-sixth the size of St. Helena, pictured a career in journalism.

The packed house Nov. 11 was both surprising and inspiring, nothing short of “incredible,” the Deer Park resident said.

Between films the audience had a chance to hear, and quiz, four guest speakers — among them one of the film’s stars, Donald Hense, founder of Friendship Schools in Washington, D.C., and teachers Pearl Arrendondo, Amber Marsh (now teaching in Napa) and Robert Louis Stevenson Middle School eighth-grade physical science instructor, Malcolm McClain.

“The two hours were full of energy,” Amis added. “People asked great questions. ... It exceeded my expectations. I’ve been living in this editing cave, mostly, and I was so nervous, but once we started it felt like the room was really alive.”

Looking back at the influences in her early life, Amis starts with a boarding school in Andover, Mass., whose high school population — 1,200 students — was equivalent to that of her hometown. Next came Georgetown University, where she majored in English, was the editor of a university publication and fell in love with a city, Washington, D.C. She thought she would make a career in journalism, but then she heard the siren call of Teach For America.

“I had already been working with inner-city kids and Teach For America sounded right,” she said.

Her first assignment was in Los Angeles’ South Central neighborhood teaching fourth- and fifth-graders. It was also one of her first glimpses into educational inequities.

“Two years into it I was absolutely angry, incensed,” she recalled. “I loved teaching, I loved the kids, but I got really mad thinking about how dysfunctional the school was, how the kids were mistreated, the comments made about them and to them in their presence by teachers.”

The next stop on her journey was graduate school at Stanford University, where she earned a master’s degree in educational policy analysis. This led to a three-and-a-half-year stint in Sen. Dianne Feinstein’s Washington office, first as a legislative correspondent tracking education legislation, then as a legislative aide in foreign policy with a focus on Africa and China.

In rapid succession came a Fulbright Scholarship to study Australia’s education system. By 1998 she was back in Washington, D.C., where she worked for various educational foundations including the Thomas B. Fordham Foundation, the Sallie Mae Fund and Fight For Children.

Then, eight years ago, she wrote an outline for “Teached” and its three components: “Path to Prison,” “The Blame Game” and “Uncharted Territory.”

She was prompted, she said, by the realization “that all the statistics and all the information we need is right in front of us. None of it is a secret. ... It seems that people are writing book after book, but somehow it doesn’t make a change in how the [education] system is run.

“What is the disconnect? Why do we have this achievement gap when we have all the information on how to improve schools?”

Amis’ first thought was to provide an opportunity for others to see those caught in the system; to be able to put themselves in the shoes, so to speak, of “real people ... who, for whatever reason, you are not connected to in your daily life.”

Following a particularly difficult year, which included the untimely death of a child she had befriended (and to whom her first film is dedicated), Amis decided to take a personal sabbatical. She packed up the car, and with her faithful companion, Bella — a lively Weimaraner mix — acting as quasi-navigator, headed west.

After a stop in Nebraska, and another in Iowa for a writers’ workshop, Amis eventually landed in the Napa Valley and set up a home base.

In the years since, she has crisscrossed the country, fundraising, interviewing and filming students and educators in Washington, D.C., New York and Los Angeles, and spending long days and too many nights editing film.

Although she has a corps of “angels” willing to work for free, a great deal still falls on her shoulders. Fundraising, for one, and plans for a book based on “Teached” are also in the works, as is the next film in the “Teached” trilogy. If enough money materializes, Amis is planning a feature film to complement “Teached” — a fictional account filmed in D.C. and based on the real-life experiences of students and families she has met.

Amis is also following the careers of two young cousins who have made great educational strides through their own efforts and the determination of their families.

“People don’t realize how much they, too, are impacted by the fact we have a school system that serves certain populations of kids differently than others,” she said. “So I keep talking about it.”

To learn more about “Teached” and future projects, visit teached.org.

Kelly Amis talks about her next film and book projects as her four-legged pal, Bella, settles in to join the conversation. Carolyn Younger photos

A still from “Teached.”

In the “nerve center” of Amis’ Deer Park home, the filmmaker brings up the website dedicated to “Teached,” her first film, which appeared in November’s inaugural Napa Valley Film Festival.