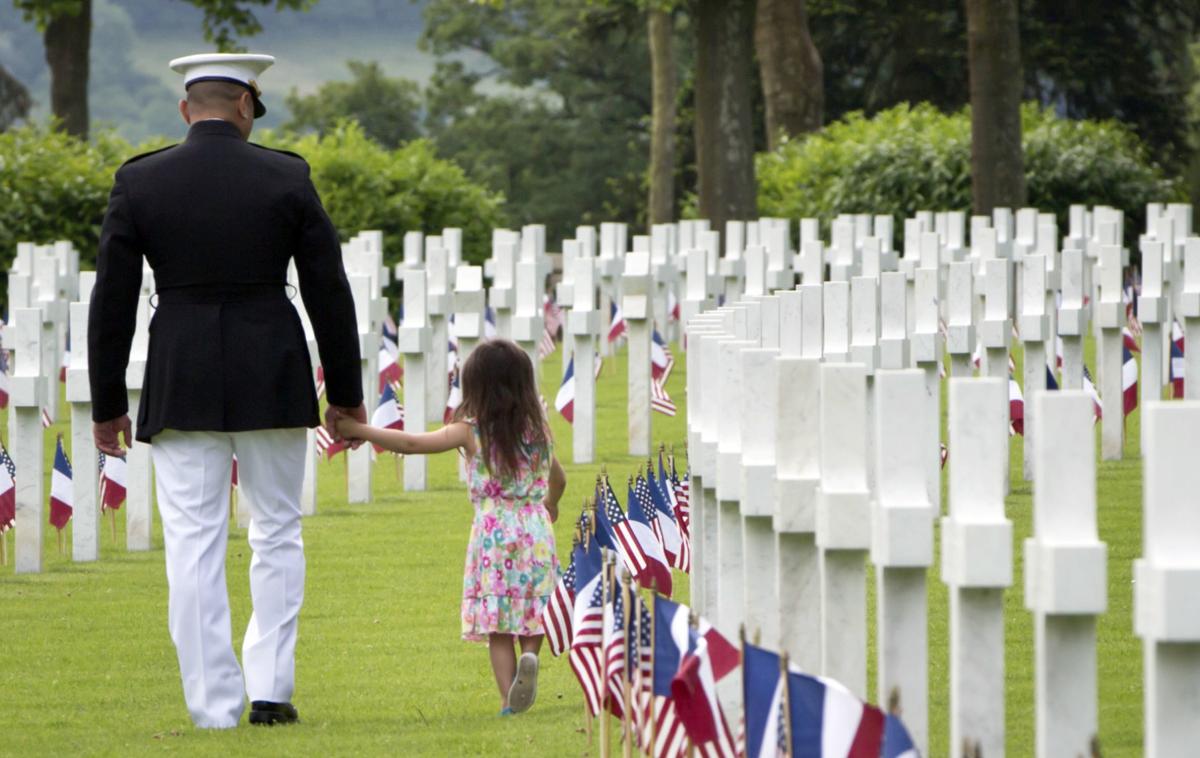 A U.S. Marine Corps soldier holds hands with a small girl as they walk among headstones of World War I dead at a Memorial Day commemoration at the Aisne-Marne American Cemetery in Belleau, France, Sunday, May 27, 2018. The cemetery contains more that 2,000 American dead and is located in front of the battlefield of Belleau Wood.

This undated image provided by the U.S. Marine Corps, shows a billboard that the Corps will post as part of a new recruitment advertisement campaign, meant to draw millennials by showing Marines as not only strong warriors but good citizens.

A U.S. Marine Corps soldier holds hands with a small girl as they walk among headstones of World War I dead at a Memorial Day commemoration at the Aisne-Marne American Cemetery in Belleau, France, Sunday, May 27, 2018. The cemetery contains more that 2,000 American dead and is located in front of the battlefield of Belleau Wood.

This undated image provided by the U.S. Marine Corps, shows a billboard that the Corps will post as part of a new recruitment advertisement campaign, meant to draw millennials by showing Marines as not only strong warriors but good citizens.

Daniel Maughs Gardner Jr. was born in 1886 in Oxford, Mississippi to Daniel and Antoinette Gardner. He had two brothers, Fulton and Andrew, who also became career military men. The family later lived in Fort Smith, Arkansas, where Daniel grew up. He was appointed to United States Military Academy West Point in 1905 and graduated in 1906.

Apparently Daniel met a lady while at Mare Island, for in 1915 he married Lois Crosby in Alameda County. She was the daughter of Walter and Harriet (Hertz) Crosby. Her aunt Jessie Hertz married Charles Butters, who would play a part in Daniel’s adventurous life.

Daniel’s Marine Corps career was cut short prior to the beginning of World War I due to his deafness. In spite of this handicap he was called back to the Marine Aviation Corps. During the war he was to lead the first American squadron into France, but lucky for him the signing of the Armistice on Nov. 11, 1918 saved him from that.

After the war, Daniel stayed in the Bay Area. He studied poultry farming at UC Davis, determined to enter that field. In late 1920 he purchased the 15-acre Greer farm on Spring Street across from the Presbyterian Church. He improved the house and Lois arrived in January 1921.

Daniel ordered fertile eggs from the Hollywood Poultry Farm in Washington State. These famous hens produced 200 eggs a year. By 1923, 2,200 baby chicks a month were hatching on the newly named “Sunnyside Farm.” Both chicks and eggs were sold. When a hen stopped laying fewer eggs, off she went to market for meat. He built a 100-foot-long chicken house and had an incubator that held 3,000 eggs. The brooder house was 160 feet long and heated. The eggs are sold as far away as San Francisco. The Taylor Duckworth Building on Railroad was his property, which is how it got its nickname “the Hatchery.”

Daniel and Lois became well-known citizens of our town and volunteered for many organizations. In April 1930, Daniel was elected to the St. Helena City Council. In those days the council chose the mayor. Chosen by his fellow council members, he served with John C. Money (Money Way was named for him), Leslie Merriam, Albert Haskell and Herbert Byrd.

Mayor Gardner promised to keep taxes from rising. He saw a need for a full-time fireman on duty, but was met with opposition because the first volunteer to arrive got to drive the fire truck, a most sought after position! The council also disagreed about handing out traffic tickets. Some thought it drove away tourists and gave the town a bad name. Others worried about public safety in the streets and all the traffic!

Butters Divisadero Mine was located in Nicaragua. Charles had invented a new process to separate gold bearing ore from rock using cyanide, a toxic pollutant. He employed Augusto Sandino at the San Albino Mine in Nueva Segovia Province. In 1927 Sandino organized a group of 50 men to march on the mine and take it over. He promised to “kill Yankees” and forcibly drove out all foreigners. The U.S. deployed a Marine Expeditionary Unit to protect American property. Sandino was killed and became the inspiration for the Sandinistas in Nicaragua.

Butters had already found a much more compliant government in El Salvador. Butters purchased the San Sebastian mine in the early 1900s for $100,000, and within a year had mined $1 million worth of 24 carat gold. Butters’ gold-sourcing skills and the workers’ stamina produced 1,673 tons of gold that was shipped to the U.S. aboard the SS San Juan in 1909.

Mayor Gardner made numerous trips to El Salvador to successfully reactivate the gold mines owned by Charles Butters. In the 1940s Gardner was gone for months at a time. Gardner risked his life there on several occasions and was finally forced to cease operations when the Salvadoran government took possession of the mine.

Major Daniel Maugh Gardner, Jr. died in 1970 in San Francisco and was buried at Arlington National Cemetery. His two brothers, General Fulton Gardner and Colonel Andrew Gardner rest there as well. Lois Gardner died in 1975 in Walnut Creek. She is buried next to her husband.