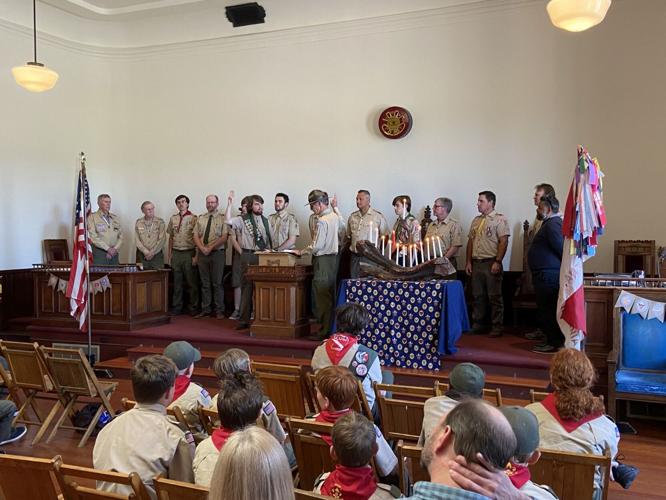 St. Helena's Troop 1 Boy Scouts held a Court of Honor May 7 in honor of William Dappen attaining the rank of Eagle Scout. 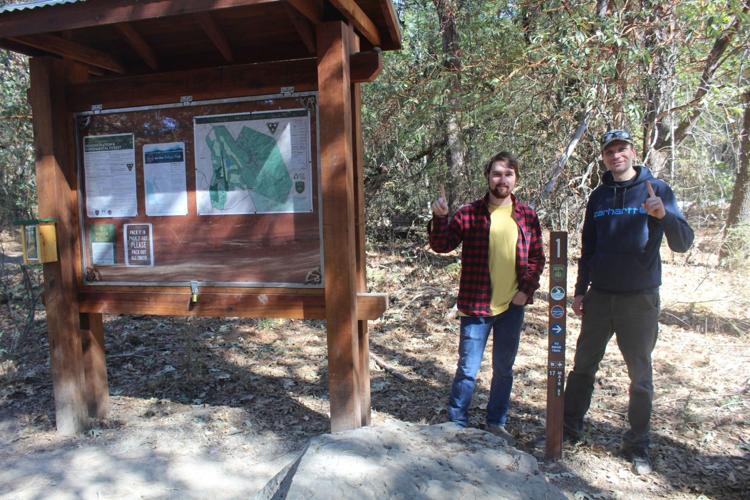 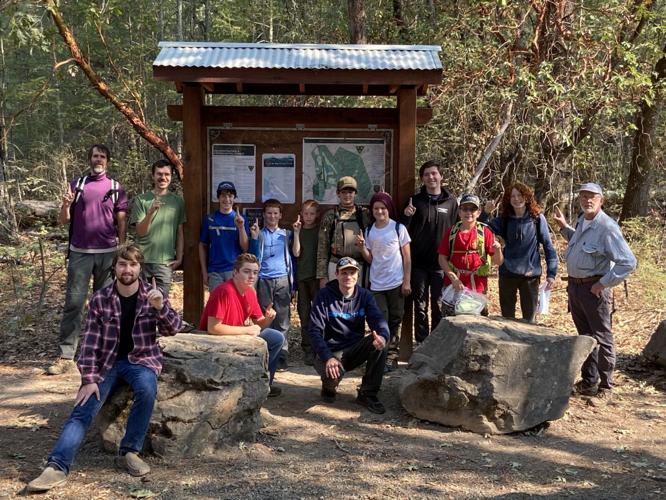 St. Helena’s Troop 1 held an Eagle Scout Court of Honor on May 7 to celebrate Dappen achieving the highest rank available to a Boy Scout.

Dappen worked with the Angwin college to map the 850-acre forest and its looping, circuitous network of trails. He hiked 35 miles of trails, collecting coordinates and creating a database. He raised money for the project and recruited fellow Scouts to place markers throughout the forest last fall, making it more accessible to hikers.

“These experiences gave me a perspective on the value of perseverance in the face of life challenges,” said Dappen, who is scheduled to graduate from St. Helena High School in June and plans to study computer science. “I have learned firsthand through the struggles of the last few years that tenacity, flexibility and finding new ways to utilize existing resources are important tools I have at my disposal to achieve any goal.”

I was trying to figure out a way to serve up a hot take and pronounce that this was not the best Girl Scout cookie, but I would have been kidding myself and doing you a disservice. This is, simply, a stellar cookie, and superior to the others if only because there are so many different things going on.

There's the crunch of the cookie, which blends with the chewiness from the caramel, giving an almost nougat-like feel. Then there's the toasty coconut flakes, followed by the chocolate-covered bottom and thin racing stripes across the top.

The innertube shape is great too. Did you never wear one of these as a ring on your pinky finger as a kid? If not, I won't lie, I feel a little sad for you. If — and it's a big if — there's one downside to these cookies, it's that they're heavier than most, meaning it's harder to cry-eat your way through a box in one sitting. But maybe that's actually a plus?

This is a good frozen cookie as well, with the initial crunch morphing into a stiff chewiness that slowly softens with each mastication.

It's the cookie equivalent of Reese's Pieces, a chocolate-coated cookie with creamy peanut butter smeared on it. Do I have to say more? (N.B. The peanut butter here is smooth and silky, in contrast to the graininess of that of a Reese's Peanut Butter Cup.) This was in the running for first place — it's a great cookie in its own right but also lends itself to the sacred art of Cookie Deconstruction, the hedonist act of consuming layers of a cookie one by one. Examples include eating the middle out of an Oreo first, or biting off individual layers of Kit Kat.

Here, you can eat the thing wholesale by eating off the peanut butter first, or nibble at the edges so you're left with one single, peanut butter-heavy bite at the very end. The power lies with you, dear eater.

Frozen, this doesn't perform quite as well. The peanut butter fades into the background and the cookie almost disappears, acquiring a meringue-like lightness.

Peanut butter has been a great friend to me during quarantine, as I imagine it has for many people. Spread on the usual suspects, sure — apples, celery, toast — but also eaten alone, on a plastic takeout spoon while sitting on the couch, staring at a blank Google doc for the second consecutive hour. What did I learn during these long afternoons? A lot about myself. But also that peanut butter tastes good anytime, and on pretty much everything.

So it stands to reason that the Do-si-do, or Peanut Butter Sandwich, is a good cookie, if a little one-note. The peanut butter cookie outside is very crumbly, like a granola bar, but the taste combination — peanut butter and, well, peanut butter — is a winner.

Thin Mints, perhaps the most iconic cookie in this pantheon, have gone through a number of name changes over the years according to Time magazine, including Cooky-Mints, Chocolate Mints and Cookie Mints. But since its debut in 1939, the idea has remained the same: Chocolate and mint taste great together. Naturally, this cookie is a winner.

The interior is almost sandy, and drier than Oscar Wilde camping in Death Valley during Prohibition. But the chocolate coating combines with the delicate, barely-there cookie to create a minty communion wafer.

It's light, snackable and dangerous — you can easily go through a stack of these without realizing it. For the record, the ABC version of these is mintier; the Little Brownie version is crispier. Both are good but Little Brownie's is the better cookie.

The Thin Mint, while not the best cookie in toto, is clearly best when frozen, and ascends to a higher plane of existence. Cold complements this cookie in the best possible way, bringing out the mintiness and creating an icy treat that you can crunch on, or let sit and melt in your mouth.

Good texture, a culinary quality prized in many Asian countries but unfortunately not as much here, was not something I was expecting from the Toffee-tastic, the surprise of the bunch.

I didn't have huge hopes for this gluten-free cookie but I was pleasantly surprised by its taste and interesting mouthfeel. The use of rice flour and tapioca starch gives this cookie a pleasant bounciness that follows the initial crunch. Then the buttery toffee chips add a pleasant chewiness that gives you that just-ate-a-Heath-bar sensation in your molars. For the gluten-averse, especially, this is the one to get. Freezes fairly nicely.

S'more, short for "some more," sure is a funny little name for a snack. But if anyone has earned the right to make some money off it, it's the Girl Scouts — a recipe for s'mores was included in the 1927 scouting manual "Tramping and Trailing With the Girl Scouts" alongside classic dishes like "Spotted Dog" and "Ring Tum Tiddy."

The recipe details the making of the s'more we all know and love — the classic marshmallow-and-chocolate sandwich. "The heat of the marshmallow between the halves of chocolate bar will melt the chocolate a bit," it reads. "Though it tastes like 'some more' one is really enough." There you go: the first snack to preach moderation.

This, the Little Brownie Bakers version, is the superior of the two different S'mores cookies. It's blocky and almost awkward to bite into, with two thick graham-y cookie layers on either side of two different cream fillings — one chocolate-flavored and the other an inscrutable "white" flavor, like in an Oreo cookie, that's ostensibly the marshmallow. It doesn't really conjure images of camping or mosquito bites or glowing coals in any kind of meaningful way as there's none of that chewy whipped marshmallow quality that makes a S'more a S'more. But it's a good sandwich cookie, even if it doesn't resemble its namesake closely.

These crispy lemon-flavored cookies are imprinted with "inspiring messages," according to the packaging; in honor of my new quarantine gut, I ate the one that said "I AM GUTSY." The cookie is light and vaguely citrusy, avoiding falling into Lysol territory, a pitfall that sometimes befalls lemon-flavored things.

A thin sheen of frosting on the bottom is just the right amount, providing a little tanginess and some lubrication to cut the dryness.

This is something of a flagship cookie, the standard-bearer on which the Girl Scout logo is emblazoned. It's also the one cookie where the difference between ABC and Little Brownie bakeries is fairly pronounced. The Shortbread cookie is noticeably superior to the Trefoil — crispy and light, not exactly buttery but milky, and with a slight saltiness to contrast with the sugar.

The Trefoil is stiffer, like a digestive biscuit; opening the package hits the senses in a way that says "clearance table at Yankee Candle" — exceedingly sweet, almost vanilla-y. The taste is odd, though: sort of wooden and dead, like a K-ration with an industrial aftertaste. Overall? These are just a little … boring. And frozen, they're worse, tasting like a mouthful of cold sand.

It's a big, square cookie with a slightly dusty sheen, and it sort of tastes like a Thin Mint minus the flavor. A thin coating of white frosting coats the graham cookie, and another layer of chocolate enrobes that, but the result is uninspired. The other S'mores cookie, which has two graham cookies on either side of filling, at least attempts to reenact a s'more. I'm not sure what this is supposed to be.

Frozen, however, this is better than the other S'more. It freezes like a Thin Mint, cold and crisp, whereas the sandwich cookie's frosting hardens while the cookie doesn't, making for an odd eating experience.

This cookie, designed to look like a cross-section of a lemon, didn't deliver. The lesser of the two lemon-themed cookies, this barely smacks of citrus and tastes an awful lot like the sweet, vanilla-heavy Trefoils. There's a layer of frosting on the bottom that gives a slight lemony sweetness but there's little tartness or tanginess, and not much flavor, either.

Frozen, though, these are surprisingly good; The frosting hardens and the cold highlights the citrus notes, evoking a cup of Italian ice.

This wasn't what I was hoping for. In my mind, this would be some sort of cookie version of Cinnamon Toast Crunch — light and airy with a sugary, spicy sweetness. Instead it's like a tile from the bathroom counter, a stiff slab that smells like syrup. This cookie actually improves with freezing, however — the coating of icing hardens and turns this into a maple-y lollipop.

In my attempt to have a more positive attitude in 2021 — a resolution I tried, and failed, to adopt in 2020 — I'm going to start with what's good about this: This is the only cookie that really embraces salt. The addition of sea salt adds a good counterbalance to this gluten-free cookie's sweetness.

Now the bad — the texture is strange and crumbly, like soft chalk. It's what I imagine biting into the Cliffs of Dover would be like. A friend said it felt like a dog treat. The chocolate chips are fine, I suppose, but the caramel tastes more like those cheap Halloween butterscotch candies than anything else — it has a light, chemical sweetness rather than the deep, toasty butteriness you want with caramel. It's not much better frozen, either. Pass.

St. Helena's Troop 1 has a reputation for producing more than its share of Eagle Scouts. The following Scouts have earned the elite status in the last decade:

A campaign to fund the renovation of Scout Hall is off to a brisk start as donors line up to help an iconic St. Helena building that’s served Scouts since the 1930s.

After closing St. Helena pharmacy, Vasconis look back on 70 years in business

One week after retiring and closing Vasconi's Pharmacy, Hap and Patty Vasconi are looking back on 70 years in business.

Scouts spent a recent Sunday in an Angwin forest clearing the brushy "ladder fuels" that have contributed to some of California's most destructive wildfires.

St. Helena's Troop 1 Boy Scouts held a Court of Honor May 7 in honor of William Dappen attaining the rank of Eagle Scout.