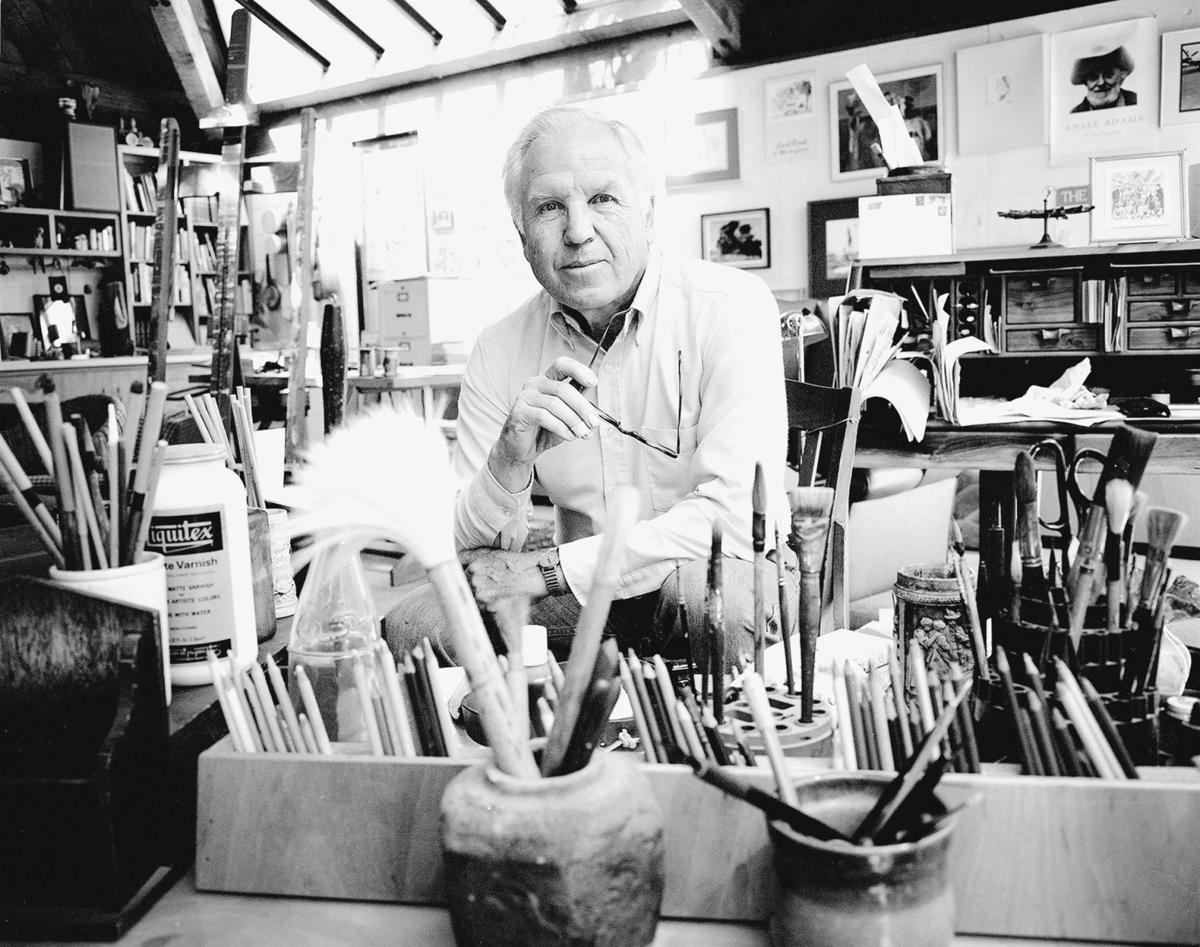 Internationally known artist Earl Thollander in his spacious studio in Calistoga in 1986. A group of Thollander's black-and-white pen-and-ink drawings were recently donated to the St. Helena Public Library. Thollander died in 2001 at the age of 79. 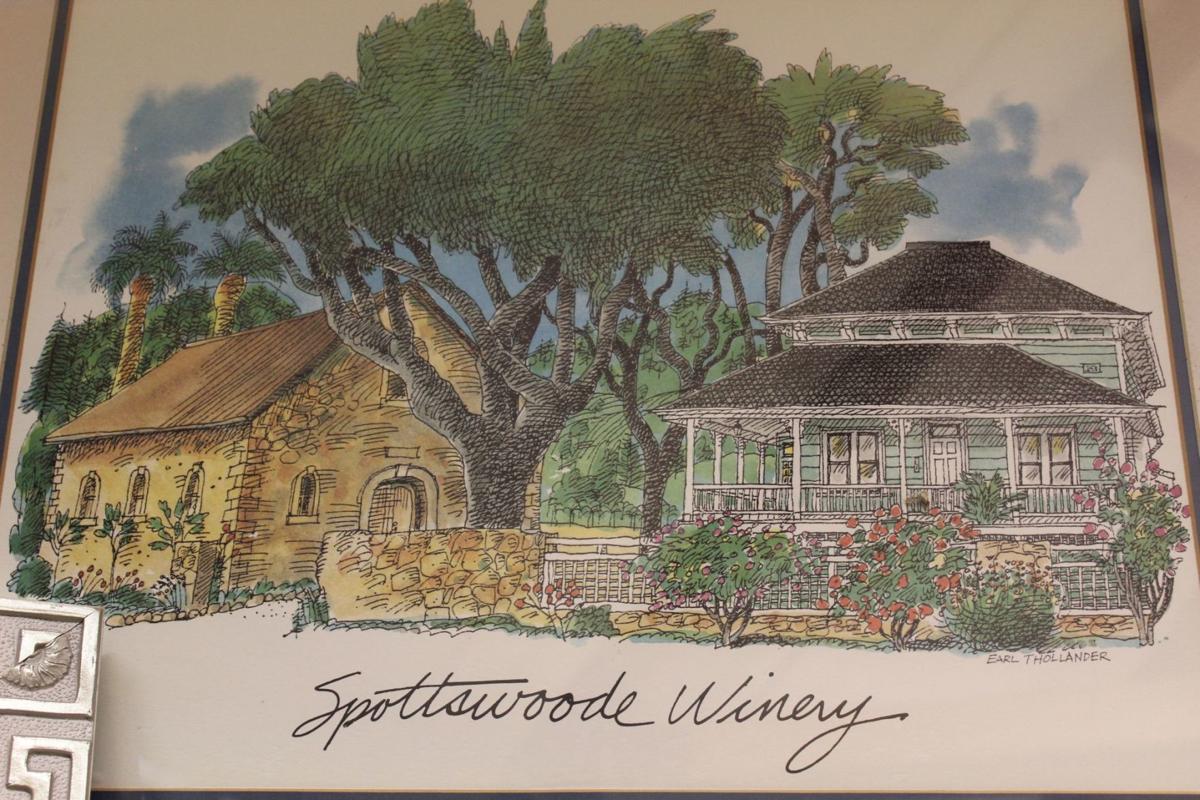 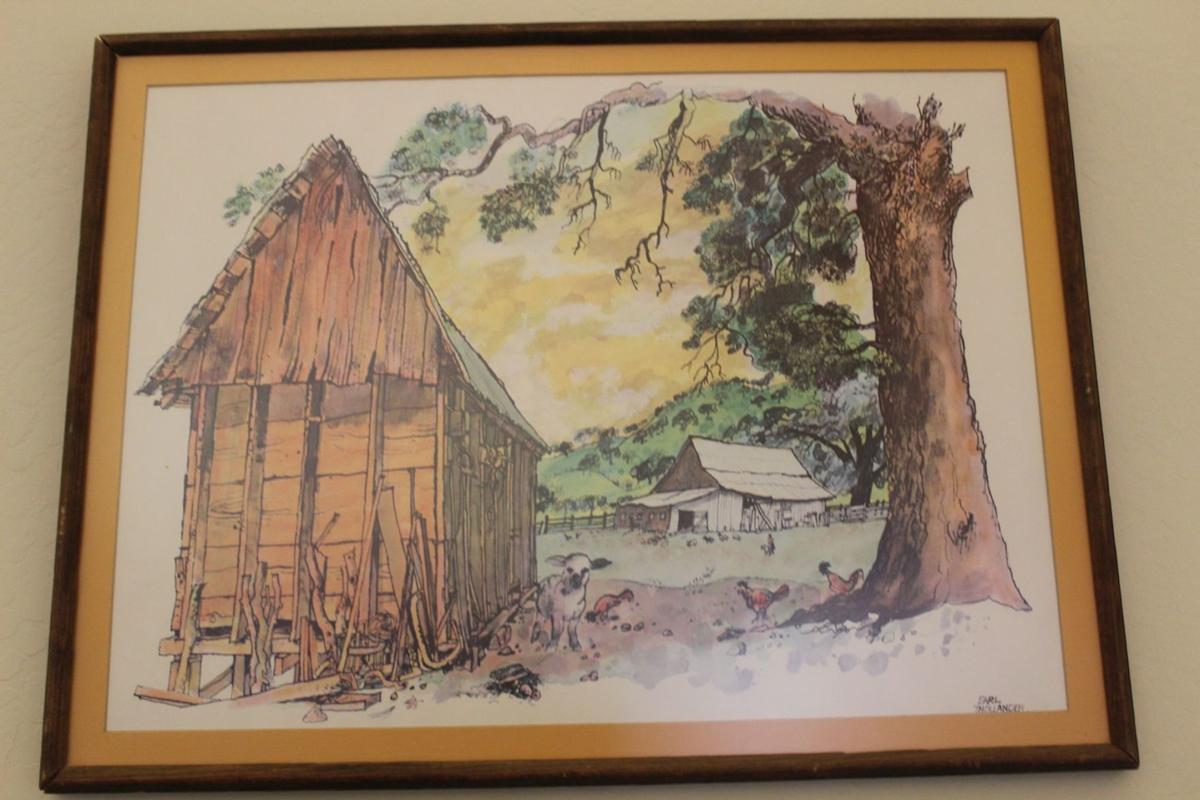 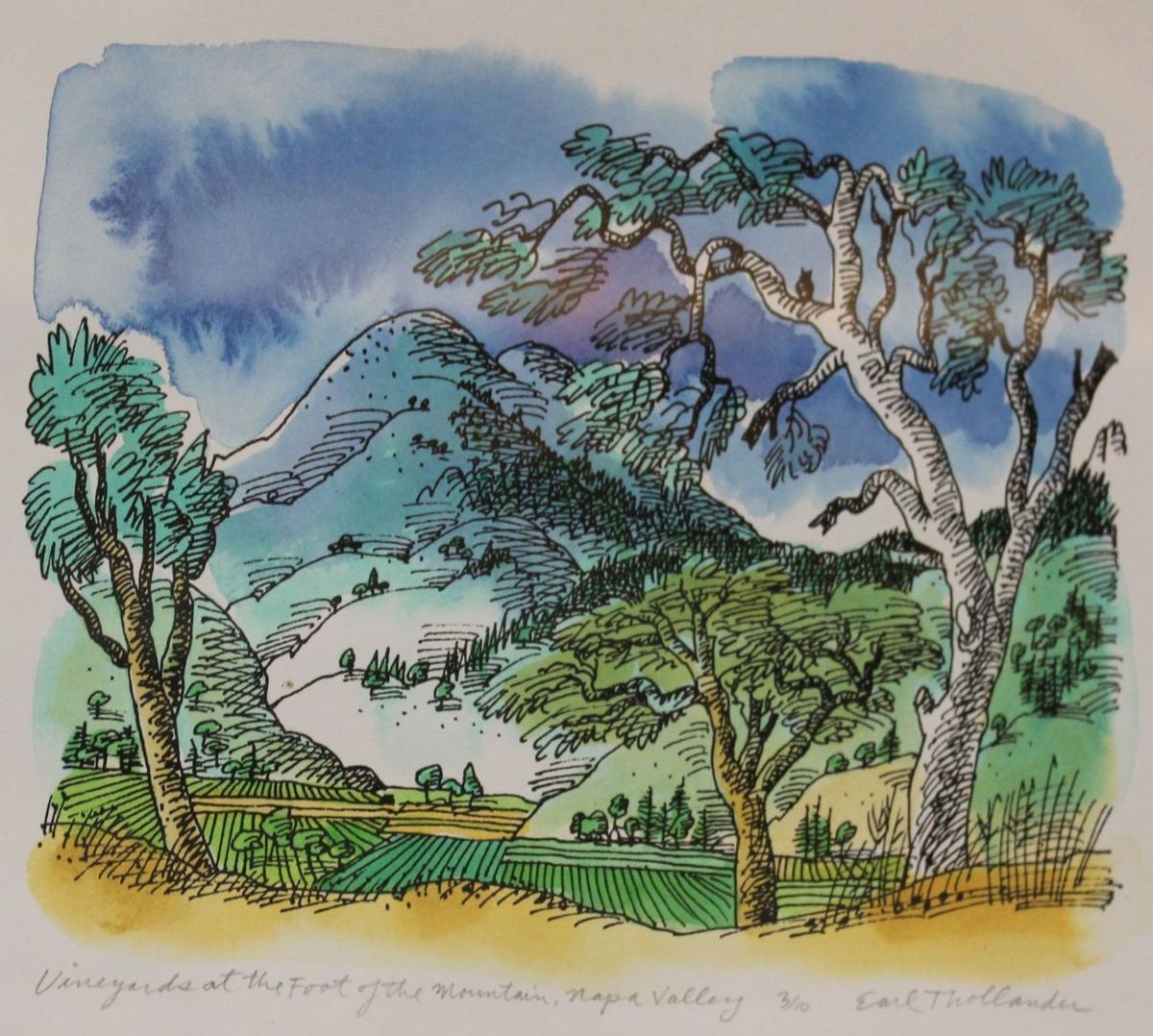 Internationally known artist Earl Thollander in his spacious studio in Calistoga in 1986. A group of Thollander's black-and-white pen-and-ink drawings were recently donated to the St. Helena Public Library. Thollander died in 2001 at the age of 79.

The seven watercolors are nicely matted and framed and grouped together at the St. Helena Public Library. They evoke a feeling of the Napa Valley's past. Retired real estate agent Katie Somple donated them to the library.

The watercolors show an old farmyard, complete with a crumbling building and a chickens in the yard; a scene of Napa Valley, with vineyards at the foot of a mountain; St. Helena's Spotteswoode Winery property and other scenes. (Five watercolors are currently on display, along with copies of Earl Thollander's book, "Back Roads of California.")

All were drawn by internationally known artist Earl Thollander, who lived on Highway 128 in Calistoga from 1969 until his death in 2001.

The donated watercolors are the second collection of art from Earl Thollander. Somple said, “Knowing an artist and really liking their work impacts you as a collector. It is for this reason that I donate my small collection of Earl Thollander art to the St. Helena Public Library. Upon retiring and closing my downtown St. Helena office, keeping them in storage just didn’t reconcile with my conscience about sharing and celebrating a gifted artist’s work.”

Somple said she met Thollander at Leonore Wilson’s writing class at Napa Valley College in the late 1990s. For the first year, Somple said she knew Thollander only as a fellow writer. She remembers his mild, respectful manner in the class. He provided kind but insightful comments on Somple’s writings and she reciprocated, but then said she regretted her critiques when she learned of his “vast talent.”

She added, “I don’t recall when or how I learned Earl was a gifted and accomplished artist but that was the moment I became a fan and started looking for his art.”

As an avid thrift, consignment and garage sale junkie, Somple said she always was on the lookout for his work. She began to recognize his style and found pieces throughout the Bay Area over the past 20 years.

“Some of the best pieces in my collection came from Lake County, either from estate sales or consignment and antique stores. My husband and I owned a trailer at Pine Grove Resort on Cobb Mountain for about 10 years,” Somple said. The two would travel to their trailer on weekends and stopped at sales along the way.

Somple said Thollander’s art wasn’t as well-known in Lake County as it was in Napa County.

“I picked up some great deals,” she said. “His work became so recognizable to me, I could spot it across a lawn or in an overcrowded consignment/antique shop.”

A couple of the pieces in the collection came from Lolo’s in St. Helena. “The staff knew I was a fan and a purchaser of his work and they would call me if they got one of his pieces on consignment,” Somple said.

She added she feels good about the donation, where the sketches will receive more exposure and appreciation than if they were kept in storage. “I hope that by seeing his works in a grouping, it will inspire people to learn more about Earl, his travels, books and sketches of California’s landscape and beyond,” Somple said.

During his career, which spanned more than half a century, Thollander illustrated 32 children’s books and 20 cookbooks. He is best known for his 10 books in the “Back Roads” series, which eventually included California, Arizona, New England, Texas, Washington, the Carolinas and others. In 1970, he began writing, designing and illustrating his first book, “Back Roads of California,” which was published by Sunset Books and remained in print for 26 years. He also produced a tour guide of San Francisco, touting 30 walking and driving tours from the Embarcadero to the Golden Gate.

He produced at least 60 one-man shows and participated in countless group and invitational shows. According to his family’s website, EarlThollander.com, “The tireless productivity and focus are a tribute to his insatiable curiosity, love of learning, life and the recording of it through his art.”

Thollander and his family acquired his Knights Valley home in 1964 and it became their permanent home in 1969, where Thollander worked in a spacious studio “built in amongst the trees he loved so much. He became and remains famous for his many pen-and-ink drawings of Mount St. Helena, the vineyards and the structures of the Napa Valley,” his website states.

Thollander loved to travel. As a freelance artist and group leader, he hosted groups of aspiring artists to more than 71 countries throughout the world. The trips were funded by a San Francisco-based travel agency. Before being a freelance artist, Thollander worked as a staff artist for the San Francisco Examiner and an advertising illustrator for Landphere & Associates advertising agency.

He was born in Kingsburg, California in 1923, and grew up and attended schools in San Francisco. He served with the U.S. Navy in World War II and afterward attended the San Francisco Art Institute and the Academy of Art, studying with many of the well-known artists of the day.

Reflections on his life

According to his website, Thollander had this to say of his life, “I am inspired and charmed by the life which surrounds me where I live. It could be an unusual sky of billowing clouds or bring sunlight shining through a break in them; fog’s mysterious blanket of softness, or mists rising in the bright sunshine following seasonal rains. Spider webs illuminated in the grasses by morning dew glinting in the early light of day, or does with their spring fawns grazing in the meadow below our house and gray squirrels leaping about bending down the tree branches; all inspire me to love life. To make pictures has been the joy of my life. I would gladly begin it all again.”

Thollander died Aug. 8, 2001 at age 79 from complications of multiple myeloma.

Editor's Note: This story and photographs have been modified to reflect the Earl Thollander artwork that was donated.

By Wes and Lauren Thollander

A 'Surreal Friday' at the Napa Valley Museum