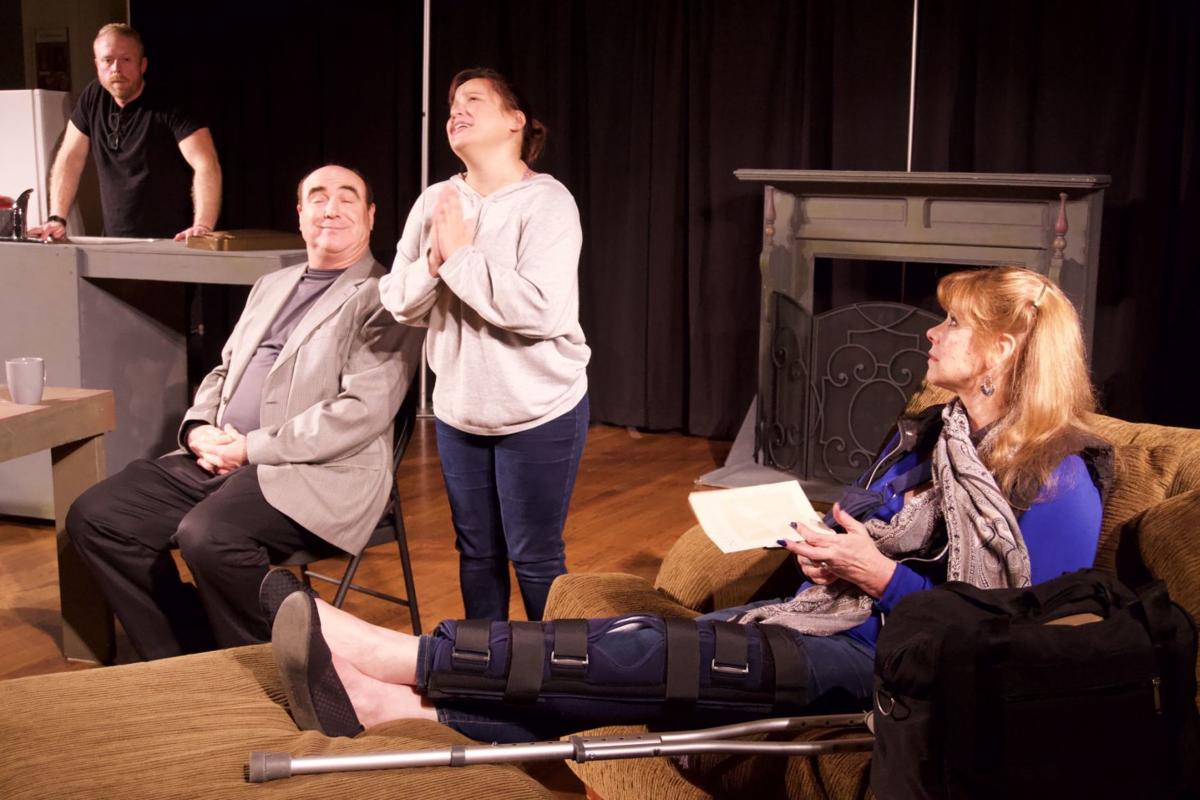 In choosing “Time Stands Still” by playwright Don Margulies as one of Upstage Napa Valley’s three plays for the season, Sharie Renault has chosen what may be the most insightful, timely and provocative play to be seen on a stage this year in the Napa Valley.

Her intelligent casting and capable direction brought to life a drama that explored a facet of the media that is now intrinsic to American daily life: war journalism.

As the play opens, Sarah Goodwin, played by Rhonda Bowen, is a photojournalist just returning home after having been injured in a car bomb in Afghanistan. She is accompanied by her partner, not husband, of eight years, James Dodd, another journalist, played by Brendan Lesti.

Sarah is feisty and independent, but clearly still shell-shocked from her injury. She hobbles around with a knee brace, an arm in a sling and a crutch. James does his best to take care of her, but is confused about whether she wants to be nurtured or left alone. However, there is a question in the subtext: Is this worth it to be a photojournalist? Putting your life on the line? For what?

Then enter Richard Ehrlich, played by Fred Ireland, and Mandy Bloom, played by Danielle Devitt. Fred is Sarah’s photo editor at the magazine and has come to see how she is doing. He brings along Mandy, his much younger girlfriend.

In getting to know Mandy, they find out she is an event planner, as she waxes poetic about choosing venues, flowers and caterers. The war-torn journalists who’ve grown numb to the abject death and destruction they chronicle condescend to the frivolity of her occupation. Not to mention the fact that Mandy’s father is three years younger than her boyfriend Fred.

Devitt plays Mandy to the perkiest. She is a sparkle, a ray of sunlight, a cheerful dose of happiness in the apartment, contrasting starkly with James and Sarah’s dour and exhausting preoccupations. This is the brilliance of Don Margulies’ play — what more opposing vocations could there be? A journalist whose mission is to bring the inhumane atrocities of war to an American public in the hopes that it will raise awareness and do something, however indirect, to quell the violence? Or, someone who throws parties for a living?

Complicating this milieu is James and Sarah’s relationship.

They have been living together for eight years, but so much of that they have spent apart — she may be in Afghanistan while he’s in Sierra Leone. But James wants more despite Sarah’s admission that she isn’t the marrying type.

The chemistry between Lesti and Bowen is heartbreaking. There is respect and some affection, but no passion. Sarah’s passion is for the thrill of tragedy, the triumph of the perfect shot. Domestic bliss is no bliss at all. But that’s not how James feels. He wants to settle down so he proposes marriage. Sarah, against her better judgement, accepts.

It’s Sarah’s drive to document the horrible tragedy that calls into question the integrity of her journalistic intention. And it’s this drive that jeopardizes her young marriage. Who is she doing it for? Is she working for her subjects — the displaced, and to be frank, the dead? She says in the play that sometimes they don’t even want to be photographed. Or does she do it for her readers back in America who voyeuristically consider the terror of other countries from the luxury of their own comfort? Most Americans are either helpless or apathetic about doing anything for another country at war, much less even caring to pollute their minds with the suffering of people far away. Given this, Sarah is still obsessed. At that point, isn’t it all about herself?

Upstage Napa Valley is currently making its home in Newton Hall at the lovely Grace Episcopal Church. Therefore, they have to construct a theater every weekend for the performances.

Kudos to the endurance of the production crew for the work it takes to set up and break down every night.

And, kudos especially to Alan Schneider who quickly replaced a fuse during this evening’s performance when the lighting overloaded the electrical circuits and half the stage went dark. Truly he saved the day.

I continue to be astounded by the quality, depth and variety of theater in this little valley. Upstage’s production of “Time Stands Still” rightly sits in the pantheon of this season’s productions.

“Time Stands Still” plays at Grace Episcopal Church for the next two weeks, Fridays and Saturdays through March 7 at 7:30 p.m. Sunday matinees are 5 p.m., March 1 and March 8. Tickets are $15 for students and $25 for adults and can be purchased at upstagenapavalley.org.

Upstage Napa Valley will audition for the winter play at 6:30 p.m. Thursday, Nov. 7, at the St. Helena Public Library.

Soroptimist St. Helena Sunrise will host Lunafest, a traveling film festival that is designed to champion and support women.

Blues vocalist and guitarist Alvon Johnson will perform at the Tucker Farm Center in Calistoga on Saturday, March 21.