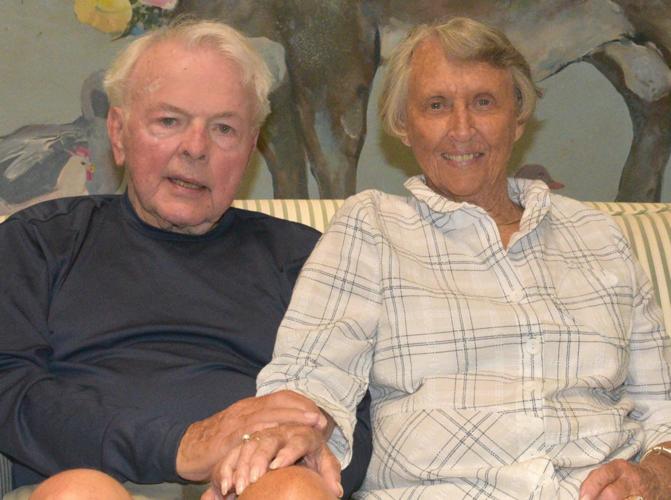 Earlier this year, Karl and Marilyn Mosher celebrated their 70th wedding anniversary. They have lived in St. Helena for some 35 years and currently are Vineyard Valley residents. 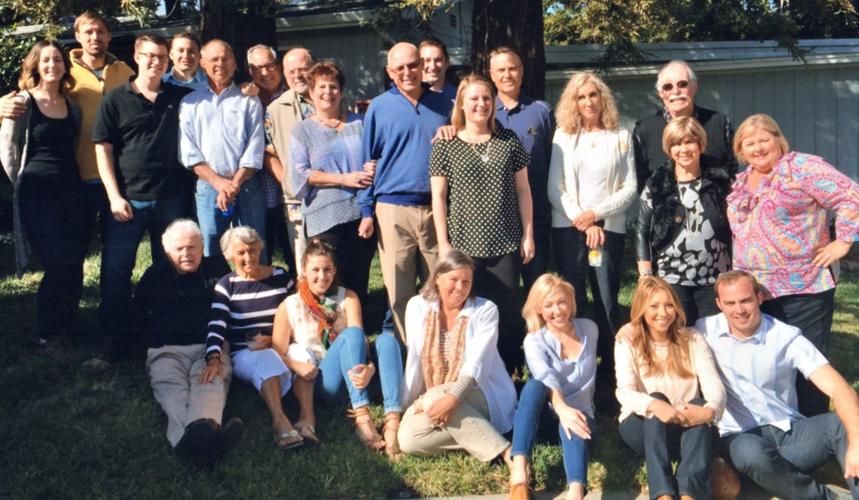 Karl and Marilyn Mosher, bottom far left, gathered with their children, grandchildren and their spouses at an Easter gathering a couple of years ago.

Marilyn Mosher remembers the first time she met her future husband, Karl. “It was in the sixth grade in Berkeley, California. The door opened one day and he walked in. I got rid of (boyfriend) Richard and got him.”

Earlier this year, Marilyn and Karl Mosher, Vineyard Valley residents, celebrated their 70th anniversary of marriage. When asked what her recipe is for a long marriage, she said, “We just absolutely love each other.”

Karl agrees, “We’ve had a marvelous life together. I wouldn’t have it any other way.” Sitting on their couch in the living room, he reflected on their lives together, “So that was a very successful deal.”

Marilyn adds, “I don’t think we’ve ever, in all of our lives, had a fight. Obviously, everyone is going to have disagreements (in their marriages,) but I can’t remember one that was angry.”

Joining the Moshers for their anniversary party were their family, which includes about 25 people, their six children and their spouses – Rick and Kathy Mosher, Steve and Liz Mosher, Marianne and Al Carrasco, Dave Mosher and Robert and Carol Mosher – many of their seven grandchildren, their spouses and three great-grandchildren.

Last week, Karl and Marilyn gathered with their son, Dave, and daughter, Marianne, and talked about their lives in both Oakland and St. Helena, their love for each other, their vacations, community service and Karl’s birthday, which was celebrated on Sunday. The party was supposed to be a surprise and after Marianne commented, “We’re all getting together this weekend for Dad’s 88th birthday,” he said he didn’t know anything about it. “I’m going to have a party, all by myself.”

The Moshers dated in junior high and then in high school. On April 16, 1949, when they both were living in the Oakland/Berkeley area, they went to Reno and got married. A few years later, they had two children and Karl was attending business school at the University of California at Berkeley.

“In those days it was common for men to work their way through college, literally, so I had a full-time job pumping gas (at a) Standard station and then took a full course load at Cal Berkeley. I had two young children at home,” Karl said. His daughter interjected, “The fact that’s interesting to me is that (pumping gas) was enough money to support your wife, go to school and have two children.”

Mosher said he graduated in 1954 with a business degree and went to work for a wood products company in San Francisco. “I was with them for over 30 years,” he said.

“Marilyn and a dear friend of our started an organization to raise money for the parochial diocese called Family Aid to Catholic Education or FACE,” Karl said. “It started at a cocktail party 50 years ago with the idea of raising $5,000,” for scholarships. “I think we raised $15,000” for children who couldn’t afford a Catholic education, Karl said.

For Marilyn, her work with the Catholic schools was “a blessing. In the inner-city schools, we would work with them, get out of classes and do things,” she said. Marilyn also did volunteer work for the Oakland Museum.

From Oakland to St. Helena

When Dave was a “little bitty kid,” he remembers his father saying he wanted to live in St. Helena. “My grandparents had a cabin on Cobb Mountain and we would always drive through St. Helena to get to Cobb Mountain,” he said. “We’d stop at an ice cream parlor somewhere in town.” He also remembers driving on Highway 29 over Mount St. Helena with six kids in the car and no air conditioning.

In 1986, Karl and Marilyn built a 900-square-foot cottage on Madrona Avenue. Five years later, when Karl retired at age 60, they put a large addition on it. Marilyn said she loved the two-story house, with its vegetable garden and pool in the front yard. “We had that while we still had our home in Oakland,” Marilyn said. “For a while, we had two homes.”

For Karl, the move to St. Helena was a “dream fulfilled, a dream to be up in the country and to be able to live here.” They kept that home until 2009, then rented a home for a short time and then bought a home in Vineyard Valley, five or six years ago.

“We had no knowledge of Vineyard Valley at all,” Karl said. “Now we are here and we’re very happy. This is a marvelous place to live. A happy, healthy and very healing community.”

Marilyn disagreed, adding “except you can’t walk to church, you can’t walk to the store, you can’t do anything. I can’t drive anymore, it makes me really mad.” Thirty seconds later, her tone had softened and she called Vineyard Valley “a wonderful place.”

In 1991, when Karl had retired and they had moved to St. Helena, he was looking for something to do, so he went to speak with Monsignor John Brenkle, who presided over the St. Helena Catholic Church for many years.

Karl’s pitch: “I wanted you to know that I’m retired. If you’ve got anything you need help on, I’ve got some business experience — I can add and subtract – just give me a call.”

Brenkle told him to wait a minute. He called Marianna Schmidt, the chairperson of the board of directors of the St. Helena Boys & Girls Club. “Before I knew it, I’m sitting across from Marianna Schmidt and Father John and the next thing you know, I’m executive director of the Boys & Girls Club. I held that job for two years and then I hired another fellow to be full-time manager. I was chairman of the board of directors for 10 years after that.”

Mosher’s story is the same for the Master Gardeners, where he was coordinator for several years for Napa County. He also served on the board for Stonebridge.

Marilyn, too, was involved in St. Helena. For 17 years, she worked at Vanderbilt (located at what is now Archetype) setting the tables, making the beds, selling pottery. “Everything in here is from Vanderbilt,” she said.

Karl adds, “I think we’ve found a nice mix of living activities. We’ve been very active in community service, in church and in family gatherings. It’s been a very pleasant and enjoyable situation for all of the years we’ve been together. There’s always something cooking, something going on. We’ve been involved in community service projects in every place we’ve ever lived and we’ve enjoyed it and felt very good about it. And that has enriched our relationship with each other.”

Marilyn added: “Wonderful family, wonderful children. We support each other. Don’t we have fun? We just have had great fun.”

We’re excited to celebrate your achievements.

Earlier this year, Karl and Marilyn Mosher celebrated their 70th wedding anniversary. They have lived in St. Helena for some 35 years and currently are Vineyard Valley residents.

Karl and Marilyn Mosher, bottom far left, gathered with their children, grandchildren and their spouses at an Easter gathering a couple of years ago.