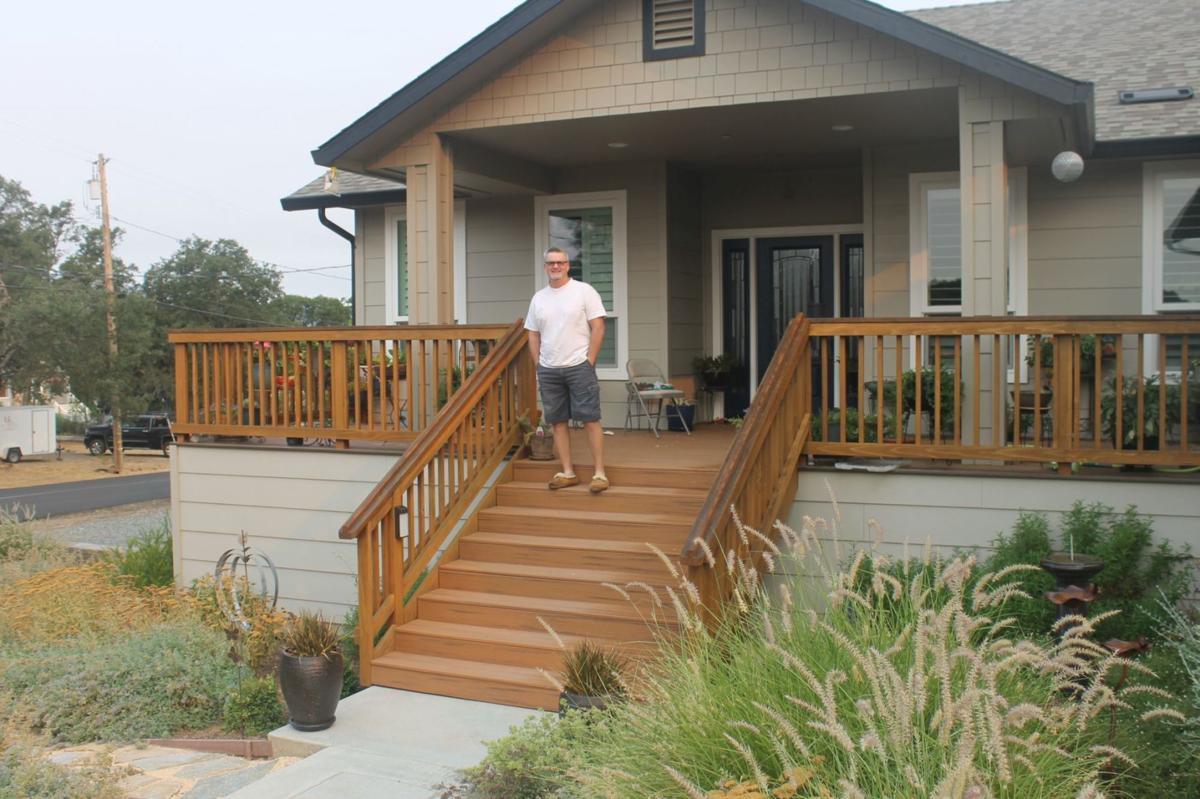 Hidden Valley Lake resident Ray Hoogendoorn remained at his house on Thursday morning, despite orders to evacuate. He said he doesn't want to lose his house to a wildland fire for the second time. His first house burned in the Valley Fire, which began on Sept. 12, 2015. 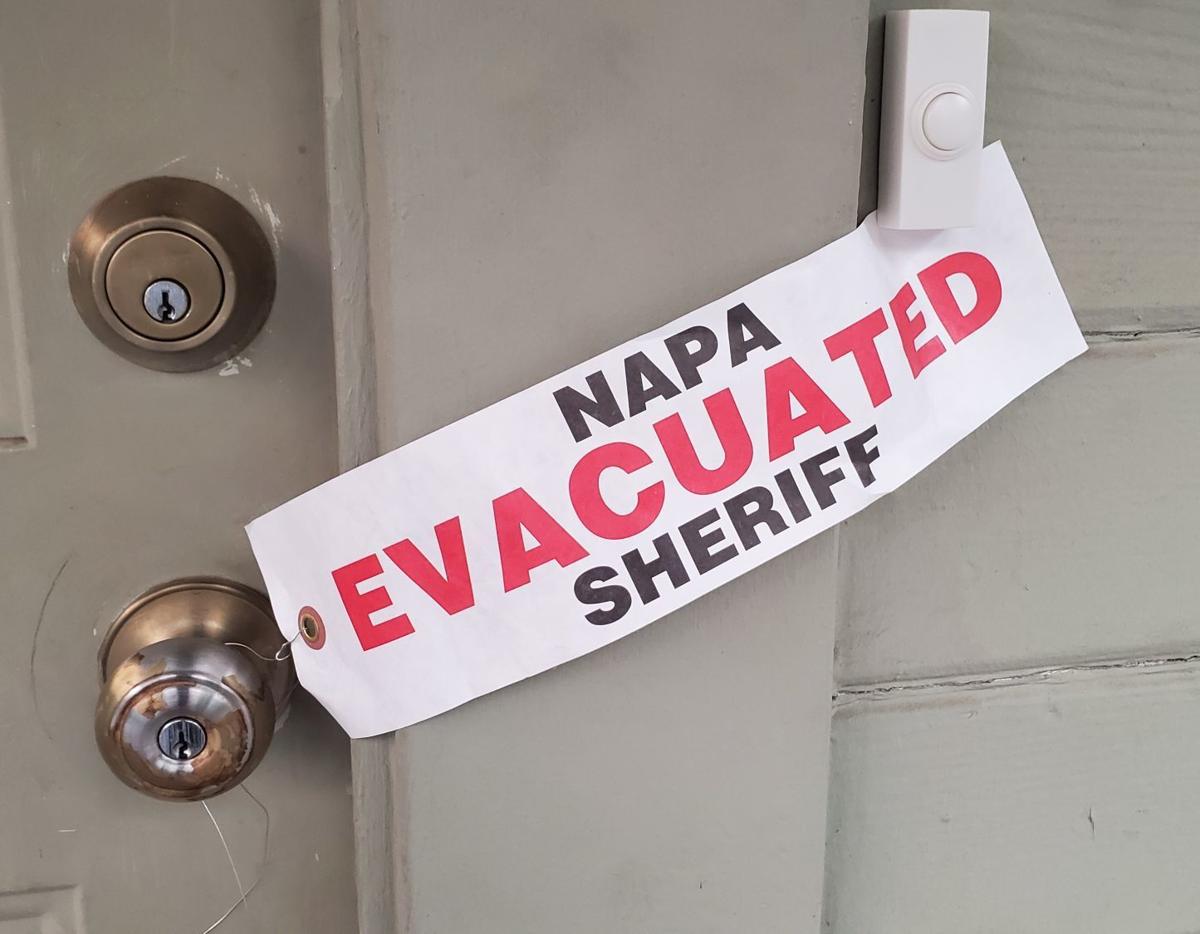 "Evacuated" tags like this one were a familiar sight around Angwin on Thursday. The tags save first responders valuable time during an emergency by alerting them that a particular home has already been evacuated. 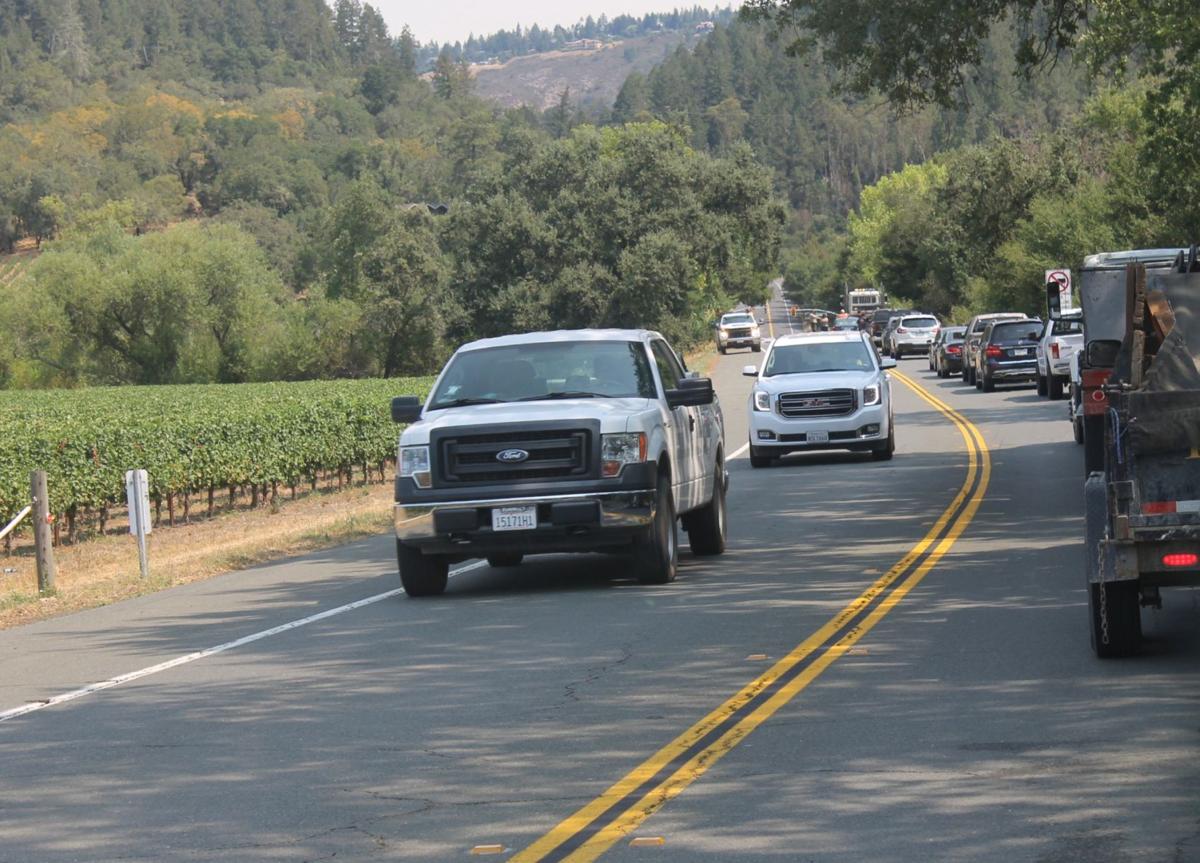 Traffic on Deer Park Road was backed up at noon on Thursday, with traffic heading to St. Helena Hospital, Deer Park and Angwin at a virtual standstill. 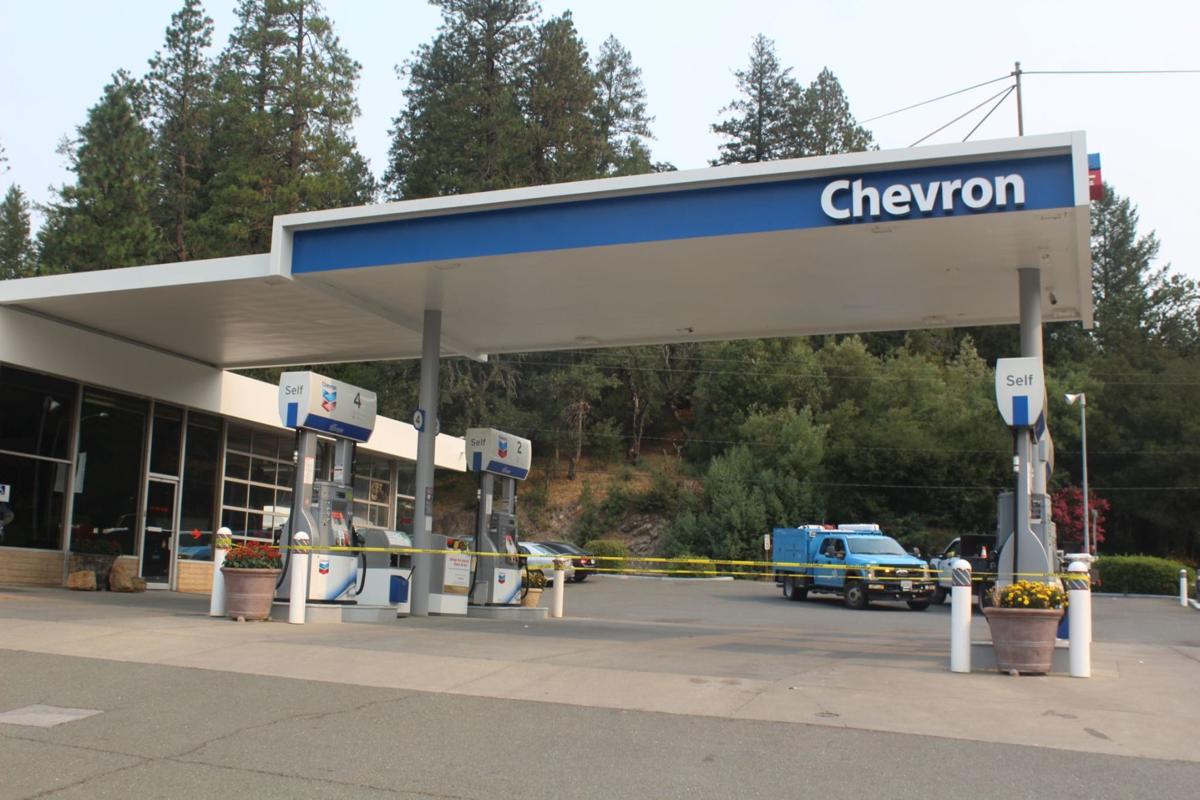 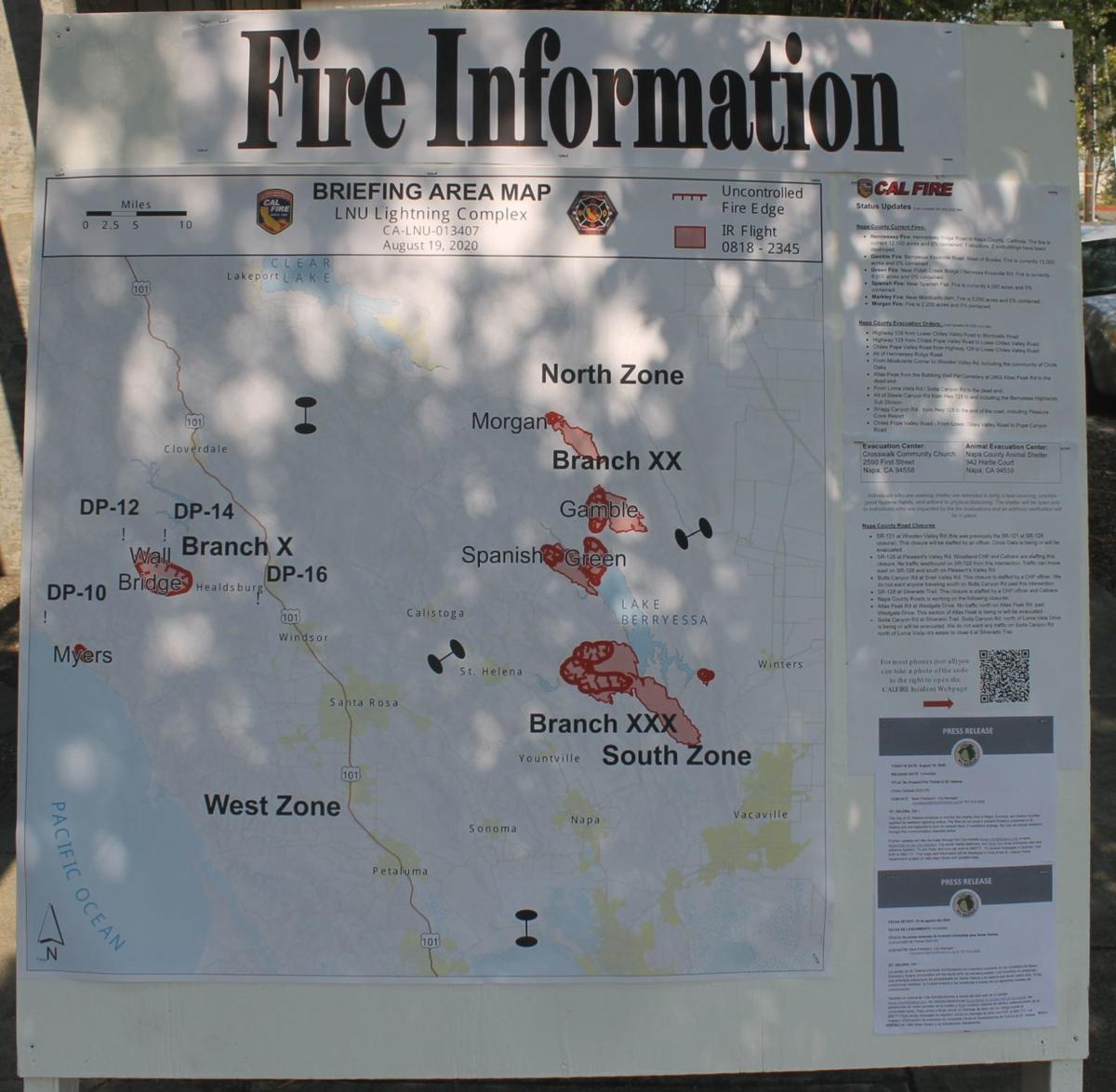 Although Wednesday’s mandatory evacuation orders included regions of incorporated St. Helena east of Silverado Trail, including Old Howell Mountain Road and Big Rock Road, there were no evacuation warnings or orders for the rest of St. Helena west of the Trail.

“The fact that a portion of St. Helena east of Silverado Trail is under evacuation reminds us all to have a ready-to-go bag packed with essentials and medicines, and to be ready to leave on short notice if asked,” said Mayor Geoff Ellsworth.

“While our community continues to be tested, this town is remarkably resilient,” he said. “It's important that our community remain calm and seek information from designated communication channels, including the City of St. Helena website, Napa County website and Nixle updates. We also have a Fire Information Board in front of the St. Helena Police Department at 1480 Main St. with maps and current fire information.”

The fire is expected to affect Upvalley air quality for the next few days. Air quality conditions are accessible via airnow.gov or the city’s local Purple Air monitor.

Some 19 hours later, HVL resident Ray Hoogendoorn remained at his house at the corner of Donkey Hill Road and Grizzly Court. Why? “Because it burned down in the Valley Fire in 2015, Sept. 12 to be exact, and I didn’t want that to happen again.”

Hoogendoorn was the only one at his house. He had called his wife, Linda, and told her to get out, before the traffic got bad. She is with their son, Jared, in Santa Rosa. On Wednesday afternoon, Hoogendoorn was in Manteca celebrating his mother’s 87th birthday and drove home on Highway 20.

“I just came here to see what conditions were and try to gather some stuff up,” he said, adding that his wife needed her medications.

But, he said, “I’m afraid if I leave, I won’t be able to get back in, although my son just got in, he showed them a Hidden Valley ID card and they had no questions for him.” A sign on Highway 29 indicated Hartman Road was closed and a group of men were stopping every car, asking questions.

On Wednesday afternoon, there was a steady stream of cars heading south on Highway 29, bumper to bumper in many places, obviously evacuees from Hidden Valley Lake. The sky was filled with yellow and gray smoke, threatening and close to the road.

On Thursday morning, the smoke was a lot higher in the sky and not as dark, with patches of blue sky here and there. Hoogendoorn acknowledged the difference: “It doesn’t look horrible, but things could change in an instant, that’s what worries me. I’m not going to put my life in jeopardy, but I wanted to get some stuff.”

The Valley Fire started on Sept. 12, 2015. It ended up burning 76,067 acres, destroyed 1,955 structures and killed four people. Four firefighters suffered serious burns in the firefight, which was fully contained on Oct. 15.

In Hidden Valley Lake, one of the neighborhoods hardest hit was around Donkey Hill Road. Of the 18 homes in a block and a half, 12 were burned and only six saved. All 11 homes on Grizzly Court burned. Nearly five years later, some houses have been rebuilt, while vacant lots, where houses were, remain.

It took a year to rebuild the Hoogendoorns’ house. “I was lucky,” he said on Thursday morning. “The insurance company was pretty good; we almost got all the money we needed.” His brother is a general contractor, who brought a lot of people to help rebuild the house. “We were one of the first ones to rebuild,” he said.

The Hoogendoorns have lived on their property for 36 years, since May 1984. “We didn’t have a problem with fires, then,” he said, adding he remembers a conversation he had with his father-in-law, when his first house was just built. “My father-in-law came up to see the house and said this is fire country and that we need to put some sprinklers on the roof. I said, we’ll never have a fire here.”

Since then, a large fire burned several homes in the Hidden Valley Lake subdivision in 1985. After that, there were small fires, here and there, Hoogendoorns said, but they weren’t massive, like the Valley Fire.

Reporter Jesse Duarte contributed to this article. The Stonebergs have lived down the street from the Hoogendoorns since 1985.)

Editor's Note: Because of the public safety implications of the wildfires, we are providing access to this article free of charge. To support local journalism, please visit https://napavalleyregister.com/members/join/ and consider becoming a member.

Watch Now: The first 7 hours of the Hennessey Fire

It was a close one, but Napa Valley's longtime Turtle Rock Café and Bar survived the Hennessey Fire.

Hidden Valley Lake resident Ray Hoogendoorn remained at his house on Thursday morning, despite orders to evacuate. He said he doesn't want to lose his house to a wildland fire for the second time. His first house burned in the Valley Fire, which began on Sept. 12, 2015.

"Evacuated" tags like this one were a familiar sight around Angwin on Thursday. The tags save first responders valuable time during an emergency by alerting them that a particular home has already been evacuated.

Traffic on Deer Park Road was backed up at noon on Thursday, with traffic heading to St. Helena Hospital, Deer Park and Angwin at a virtual standstill.