Eight St. Helena families spent last weekend the same way they’ve spent every weekend for more than a year: Building their future homes stud by stud, wall by wall, and side by side.

As temperatures crept toward the triple digits at the Brenkle Court construction site on McCorkle Avenue, it was clear they don’t call it “sweat equity” for nothing.

For the most part, the eight families who are working toward their dream of home ownership knew little or nothing about construction 58 weeks ago. Judging by the team of five people who confidently raised the frame of a second-story wall and held it upright as a woman with the bearing of a kindly grandmother pounded it into position with a sledgehammer, amateur hour is over.

“By now they know what to do,” said Larry Vermeulen, project manager for the nonprofit developer Our Town St. Helena. “The first eight or nine months was constant repetition — how to do this, how to do that, correcting mistakes. But now they’re pretty self-sufficient.”

Under Brenkle Court’s sweat-equity financing model, also known as self-help housing, the future owners perform most of the labor, reducing construction costs and therefore the price of the home.

Subcontractors are hired only for specialized work like the foundation, drywall, roofing, plumbing, electrical, heating and air conditioning.

The City of St. Helena provided the initial financial boost for the project when it bought the half-acre lot for $700,000, gave it to Our Town for only $1, and waived various development fees.

As of Saturday, the second floor was almost done. The next six weeks will be spent putting up roof trusses, sheeting, fascia and trim. Then professional roofers will lay down shingles to get the eight units watertight for the winter.

If everything goes according to plan, the homes should be finished next May.

In order to be eligible for the program, applicants’ income must be high enough to bear the eventual mortgage payments but low enough that they still qualify for the program. Based on Napa County’s median income, that translates into a small income window of approximately $40,000 to $60,000 for a family of four, Vermeulen said.

The income and credit qualifications are just the beginning. Two qualifying families dropped out early on because of the massive investment of time and labor.

Vermeulen said those families calculated that based on the amount of work in proportion to the cost of the homes, their labor would be earning them only $7 an hour.

That “purely economic point of view” was misguided, Vermeulen said.

“They missed the point that you’re making a long-term investment,” he said. “Their rationale was ‘Why should we work for $7 and then pay higher housing costs than we’re used to?’ But those costs are locked in for the next 35 to 38 years, whereas folks who are renting will continue to see increases.”

The remaining families are confident their labor will pay off.

“I wasn’t surprised by all the work,” said Anai Ortiz, a regional coordinator for EAH Housing, which manages Stonebridge Apartments. “It’s definitely worth it.”

What’s her specialty? Not hammers and nails, she said. “But I’m good at cutting exact pieces of lumber. And I like doing layout of the walls.”

“It’s been exciting to see the build-up of a house,” Ortiz said. “I’ve definitely learned a lot.”

Marta Rodríguez works for One True Vine in St. Helena and Calistoga. Like most of the Brenkle Court families, she’s a longtime St. Helenan, having lived in town for 25 years.

Like Ortiz, she takes pride in her measuring and cutting. “When you cut a piece and it’s just right, you go ‘Yes! I did it perfect!’”

“My mom jokes that he’s build her house more than she has, even though she works really hard,” Aviña said.

Working alongside the families are volunteers like Tom McBroom, who’s worked with Habitat for Humanity for over 25 years and helps out at Brenkle Court on Saturdays.

“It’s a joy to see them get into their own homes,” McBroom said. “There’s something about home ownership that brings a family together and also brings all these other families together with each other.”

All eight units are identical. Each one is built one step at a time, so the lessons learned in building a particular wall in the first unit can be applied to the other seven. By the time the families get around to building that wall in the eighth unit, they generally have it down pat.

Even though they all work together, they can’t help but take special pride when working on what will be their own unit.

“You do feel proud when you’re working on your own house,” Ortiz said. “It feels good to think ‘This is my house, this is my living room, this is my garage.’”

“These families develop a real sense of accomplishment, doing something they never thought they would do,” McBroom said.

Brenkle Court is named after Father John Brenkle, formerly of the St. Helena Catholic Church and a noted advocate for farmworkers and affordable housing.

Watch now: No more discriminating against renters who have housing vouchers

ST. HELENA — Eight Upvalley families started a journey of home construction this month that will end in 18-20 months when all of the eight tow…

In light of the continuing COVID-19 coronavirus pandemic, Our Town St. Helena has modified its operational polices while continuing to work on its affordable housing projects.

The new laws are intended to increase density, streamline the approval of housing projects, and promote accessory dwelling units.

The nonprofit Our Town St Helena (OTSH) is seeking applicants for its newly acquired affordable rental unit on Pope Street.

After eight months of public input, consultants are getting ready to rewrite St. Helena's zoning code.

We are ‘St. Helena Strong’ in challenging times

Commentary: Mayor Geoff Ellsworth says to our community: Stay alert and stay safe. Together we can get through this.

A pair of Class II bike lanes are coming to the stretch of Spring Street between Valley View and West Sylvaner Avenue.

Our Town St. Helena's plan to build four affordable housing units on Pope Street is going before the Planning Commission on Thursday.

Our Town St. Helena won approval to build four affordable housing units at 963 Pope St., making a total of five on the property. 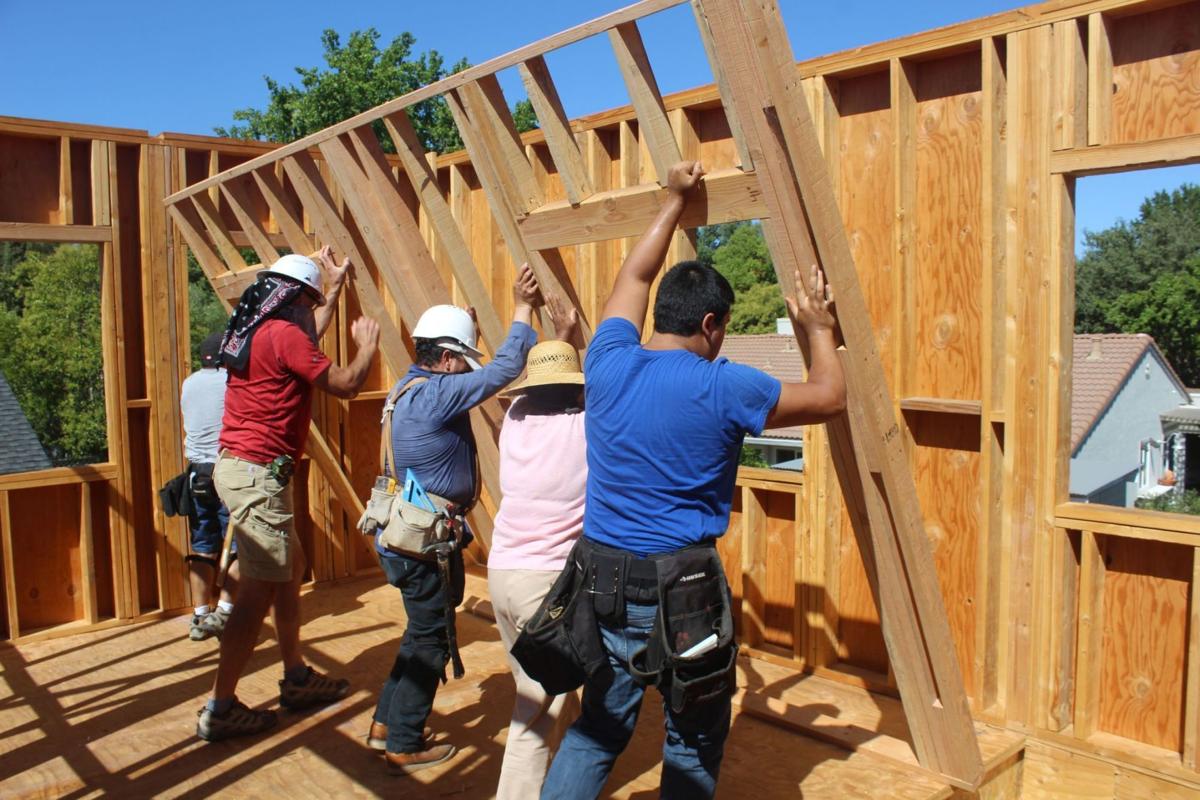 Workers raise a second-floor wall at one of the eight units at Brenkle Court. From left are Eric Martinez, Larry Vermeulen, Bardomiano Lopez, Bertha Delgadillo and Jose Delgadillo. 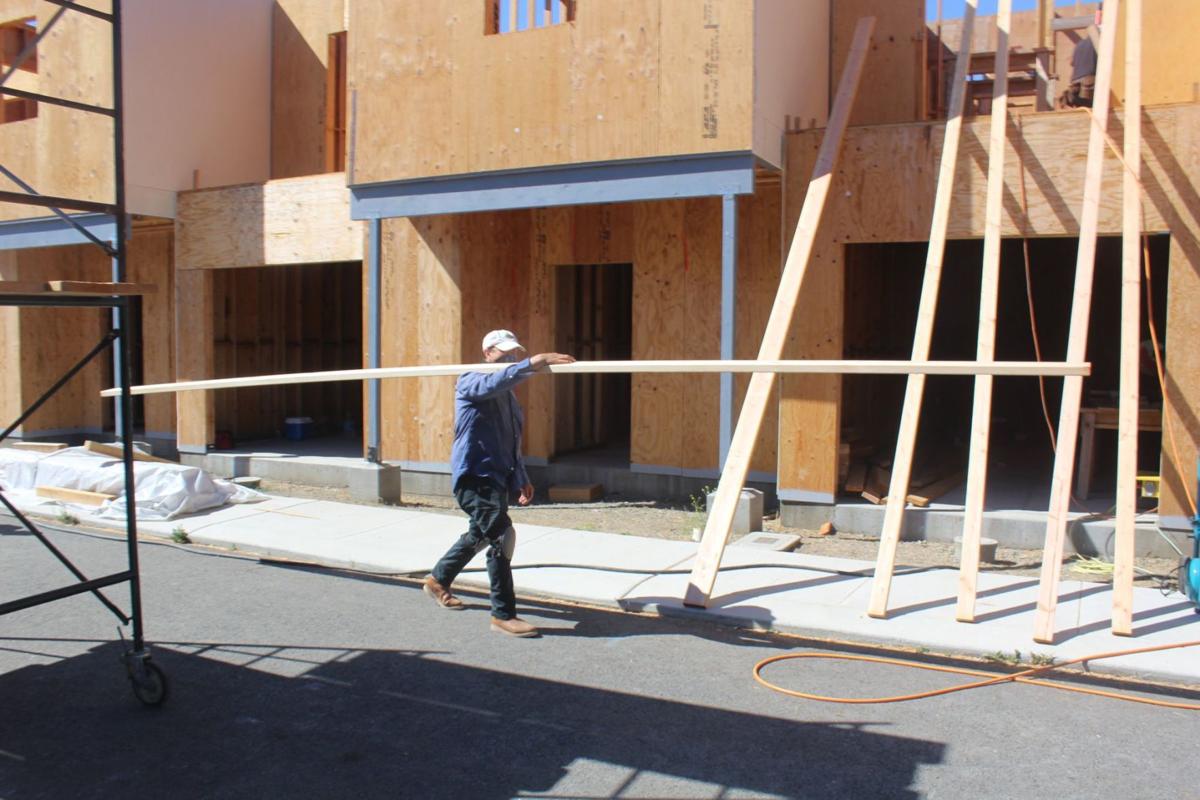 Bardomiano Lopez carries a board at the Brenkle Court construction site. 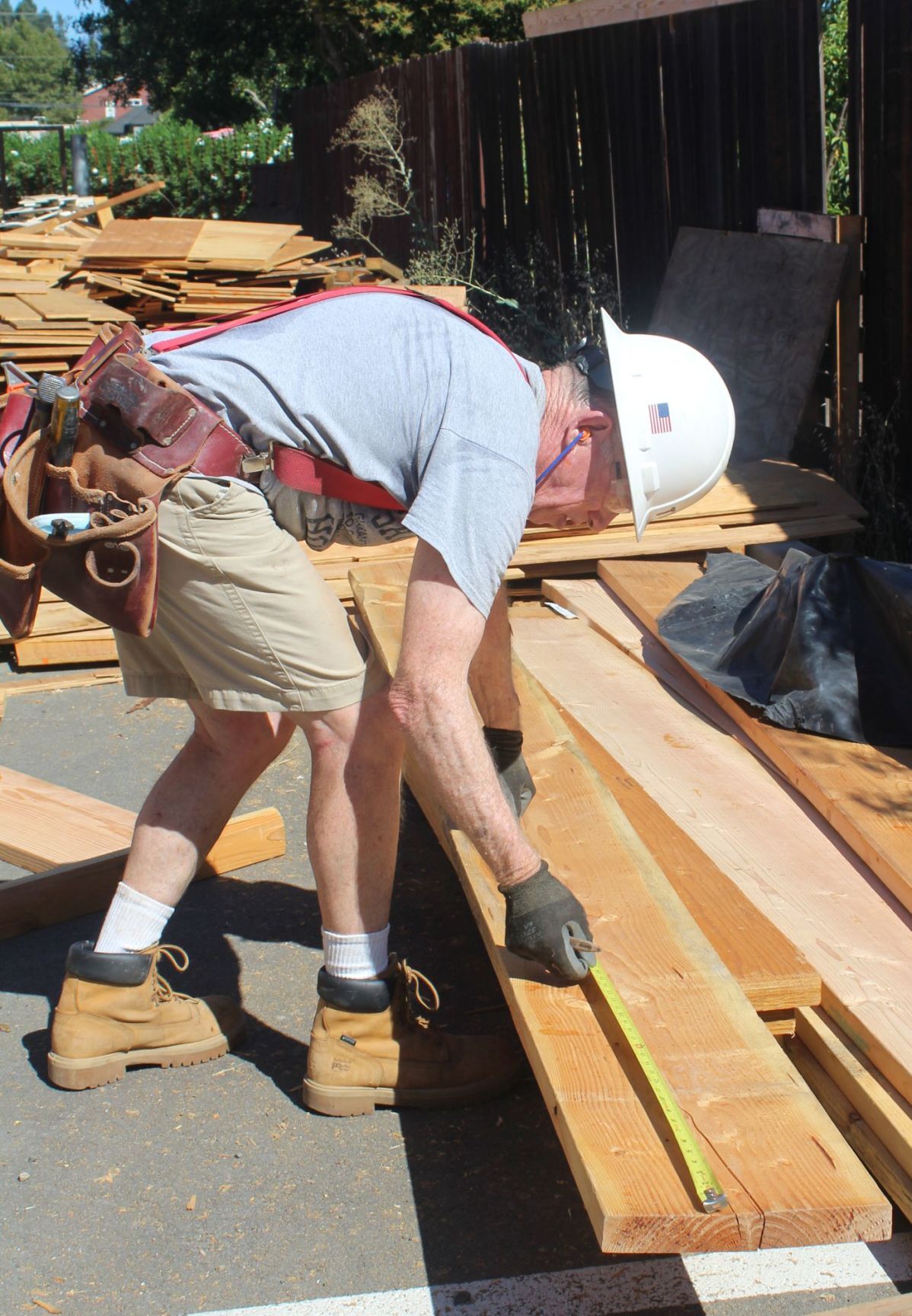 Volunteer Tom McBroom measures a board. He spends his Saturdays helping out the families at Brenkle Court. 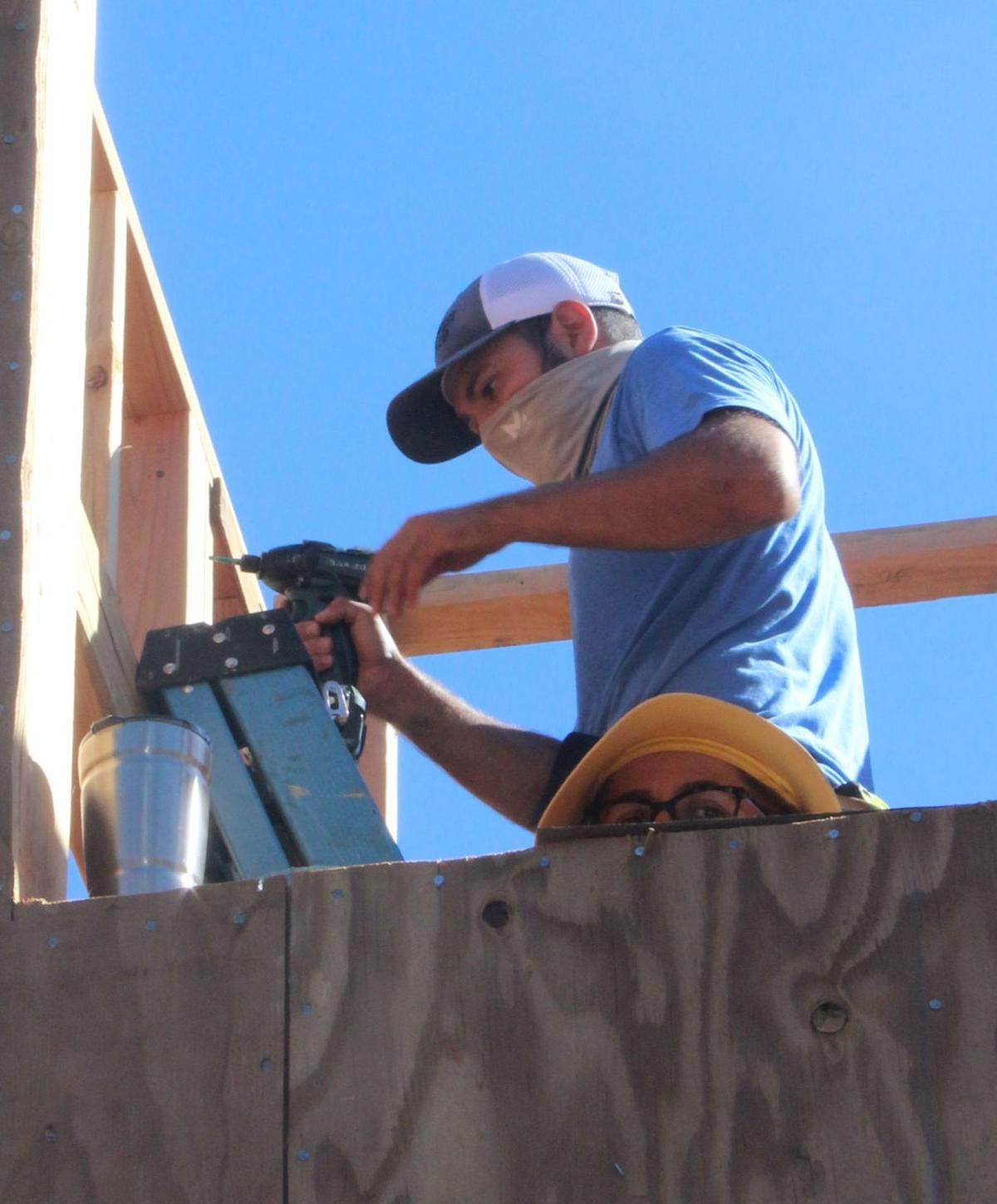 Gustavo Rodríguez and Rosa Rodríguez work on the second floor of a unit at Brenkle Court. 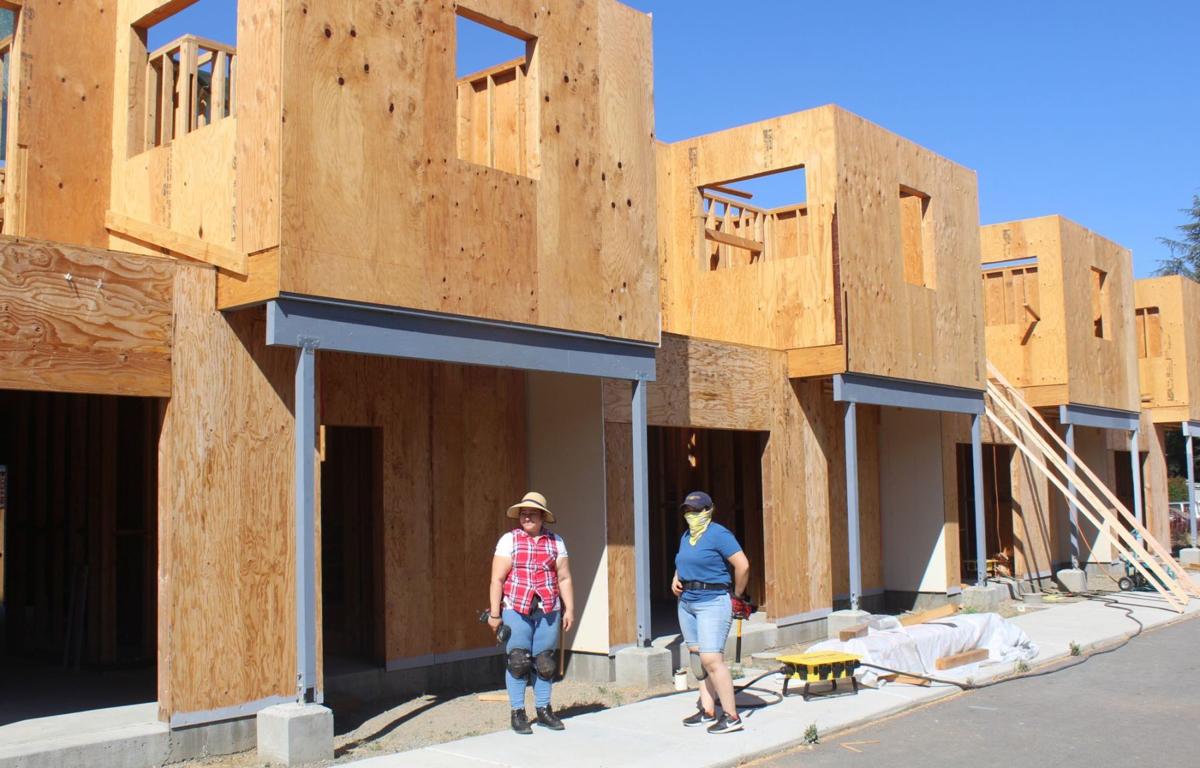 Ana and Alondra Martinez at the Brenkle Court construction site.