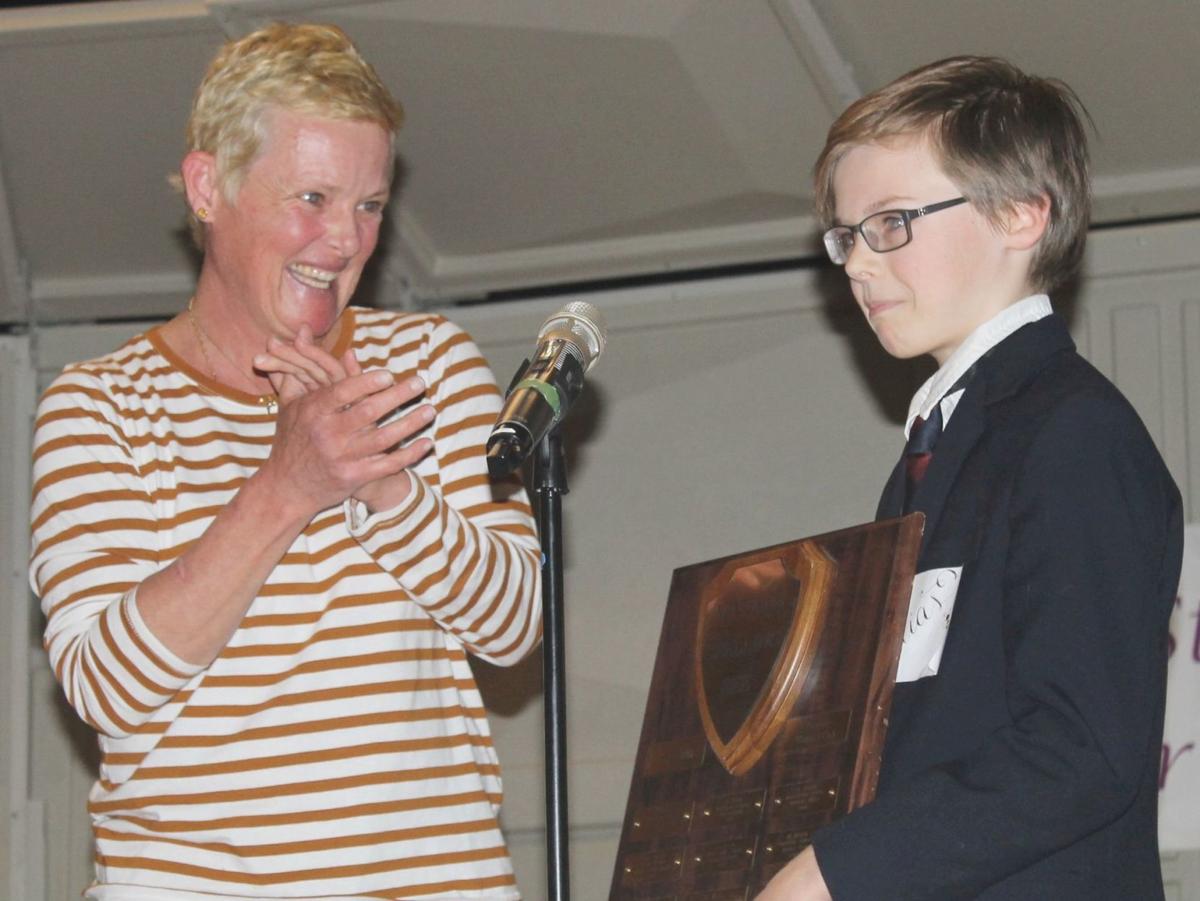 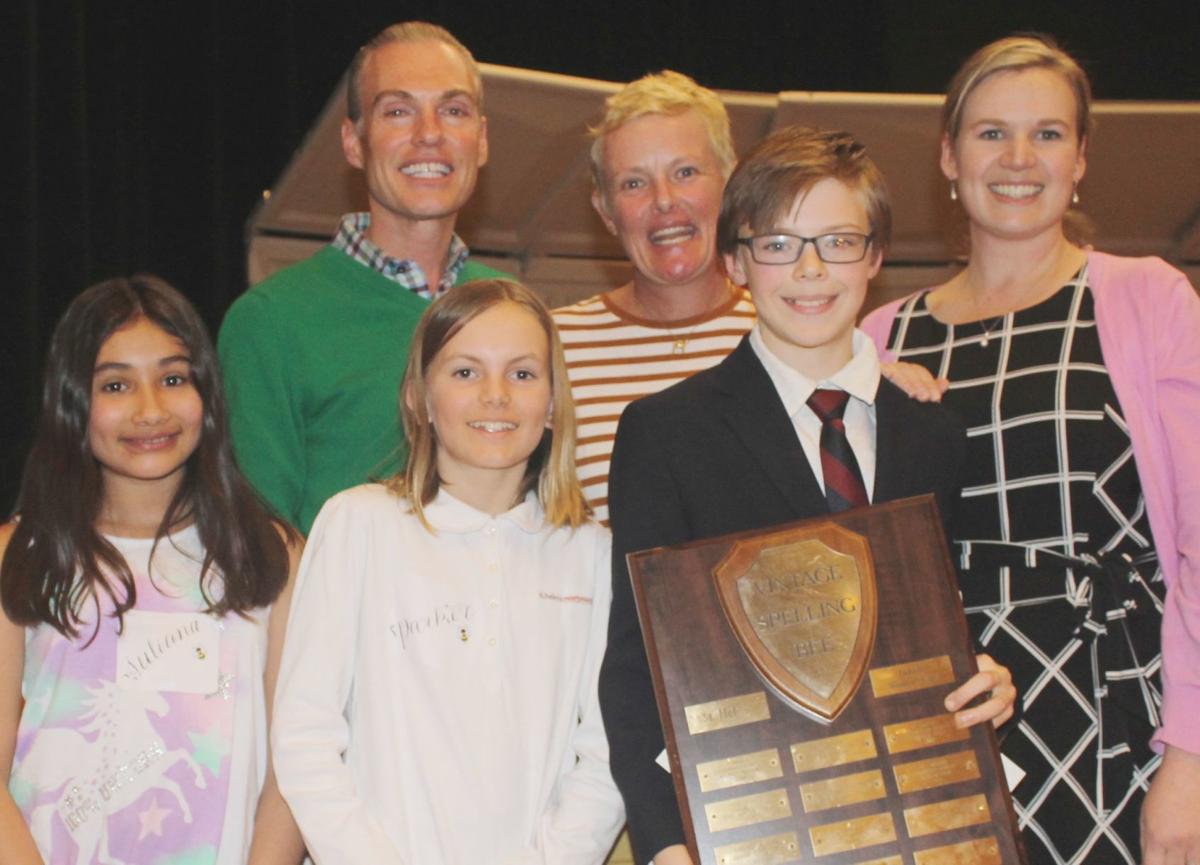 Wayne Armstrong, master of ceremonies and announcer, Catherine Dann, president of the St. Helena Junior Women's Club, center, and teacher Katherine Carattini, gathered with the first and second place winners of the club's annual spelling bee for fifth graders. The students are, from left, Juliana Clarke and Parker Stephens, who tied for second place and Elias Kelly, who won the March 12 event. 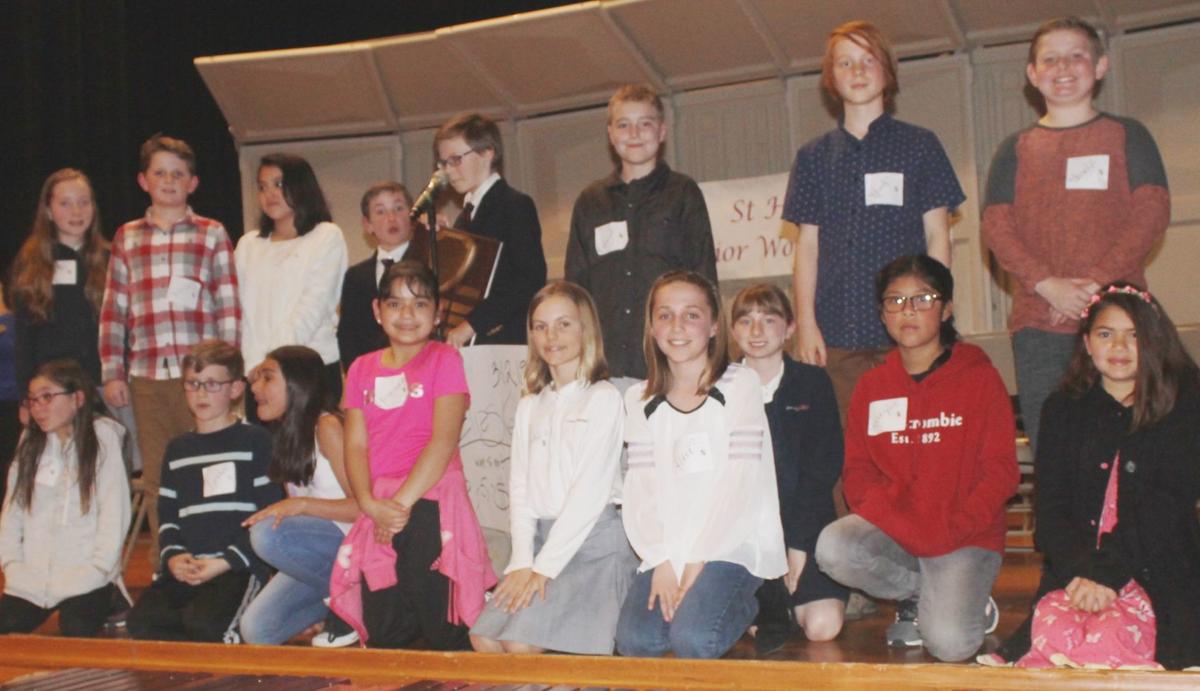 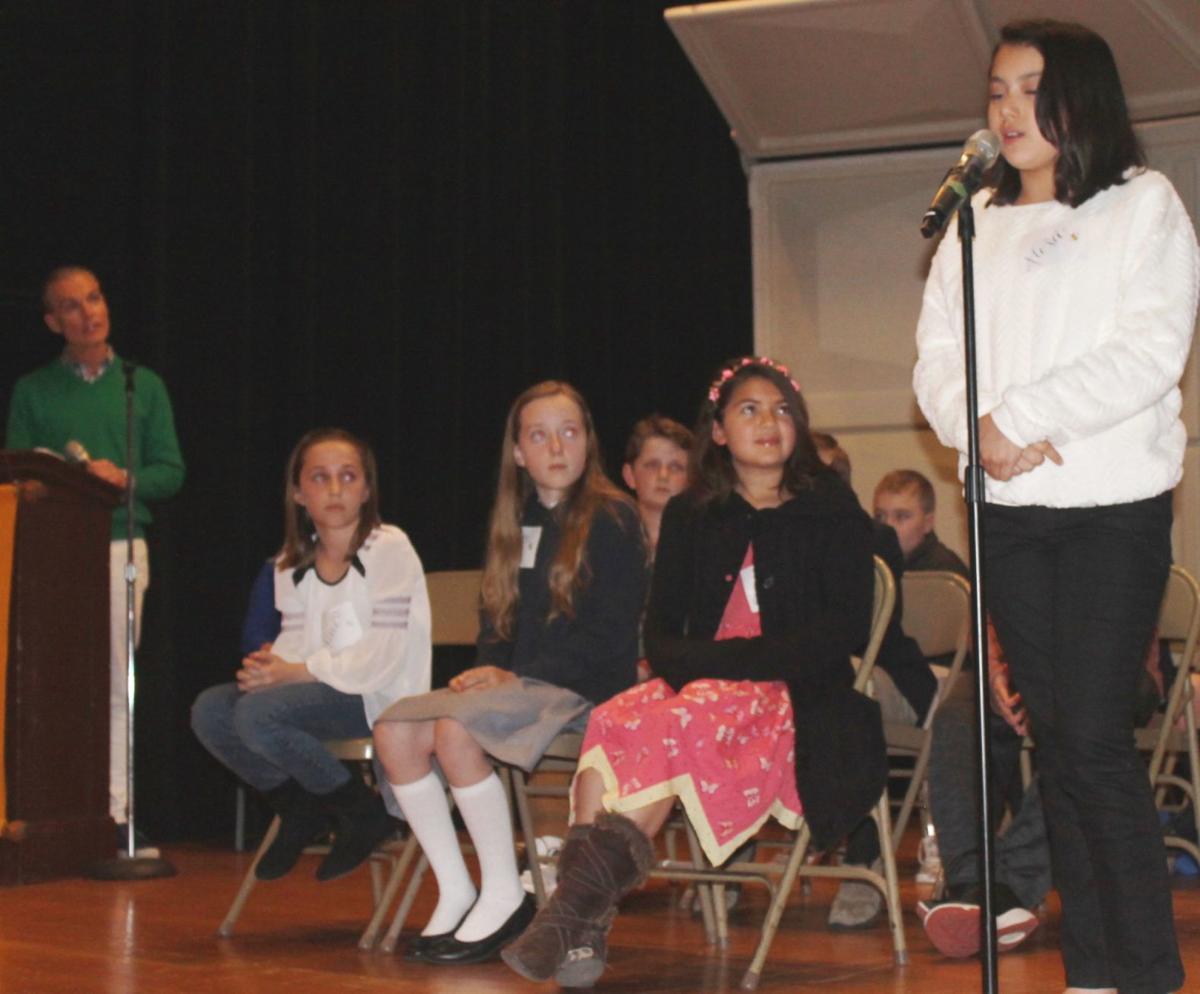 Kelly received $150 for winning the event and Women’s Club President Catherine Dann told him he should use it for school books. He probably will, because although he said he didn’t know how long he had studied to compete in the spelling bee, he said he reads a lot. His teacher is Katherine Carattini.

Before the spelling bee started at 7 p.m., the 18 fifth graders sat on stage — some of the boys were in suit coats and ties and some of the girls were in dresses, while others wore slacks. In the audience were parents, grandparents, brothers and sisters of the contestants as well as Junior Women’s Club members and others.

Wayne Armstrong was the announcer and the master of ceremonies. Before he started announcing the words and using them in sentences, he said, “Spelling is really important” and words spelled correctly are needed to communicate, especially in writing. Even with computers and spell checkers, the need to spell words correctly is necessary, because, Armstrong said, a computer cannot differentiate between words that sound the same but are spelled differently, like “there” and “their.” He told the students, “You are smarter than computers.”

The spelling bee started with simple words – Alice Baxter spelled “wish” as the first word and Annette Glynn spelled “said” correctly as the second word. After each response, the audience clapped. All of the students made it through the first round.

In the second, which featured longer words, “pencil” was misspelled and although one boy had a hard time with “desert,” he showed visible signs of relief after spelling it correctly.

As each contestant stood at the microphone, Armstrong would say the word, use it in the sentence and say it again, for example: “Clown, I want to be a clown for Halloween. Clown.” The fifth-grader spelled the word correctly and the third and fourth rounds continued. Missed words included “pillow” and “fourth,” although “champion” proved to be no problem. One of the girls was asked to spell “hospital” and she paused and struggled to do so. Once Armstrong told her the word had been spelled correctly, the audience clapped and cheered for her.

During the competition, several of the fifth-graders struggled to correctly spell a word, starting, then stopping, asking to start to spell the word again and finally spelling the word correctly … much to their relief and the audience’s joy.

At the end of the fourth round, three contestants missed “raisin,” and another two missed “anxious.” Forty minutes had passed.

In the fifth round, the seven remaining fifth-graders correctly spelled “prompt” and “attempt,” but two of them missed “chorus.” The sixth round began with five students, one of whom missed the word “several.” In the last round, one of the four students left, misspelling “pierce,” and two, Juliana Clarke and Parker Stephens misspelled “plateau.” They were knocked out of contention when Kelly spelled the word correctly.

Those competing in the spelling bee were:

Why we should all Give Big

It takes more than a classroom, a teacher and a pen and pencil to produce a well-rounded education.