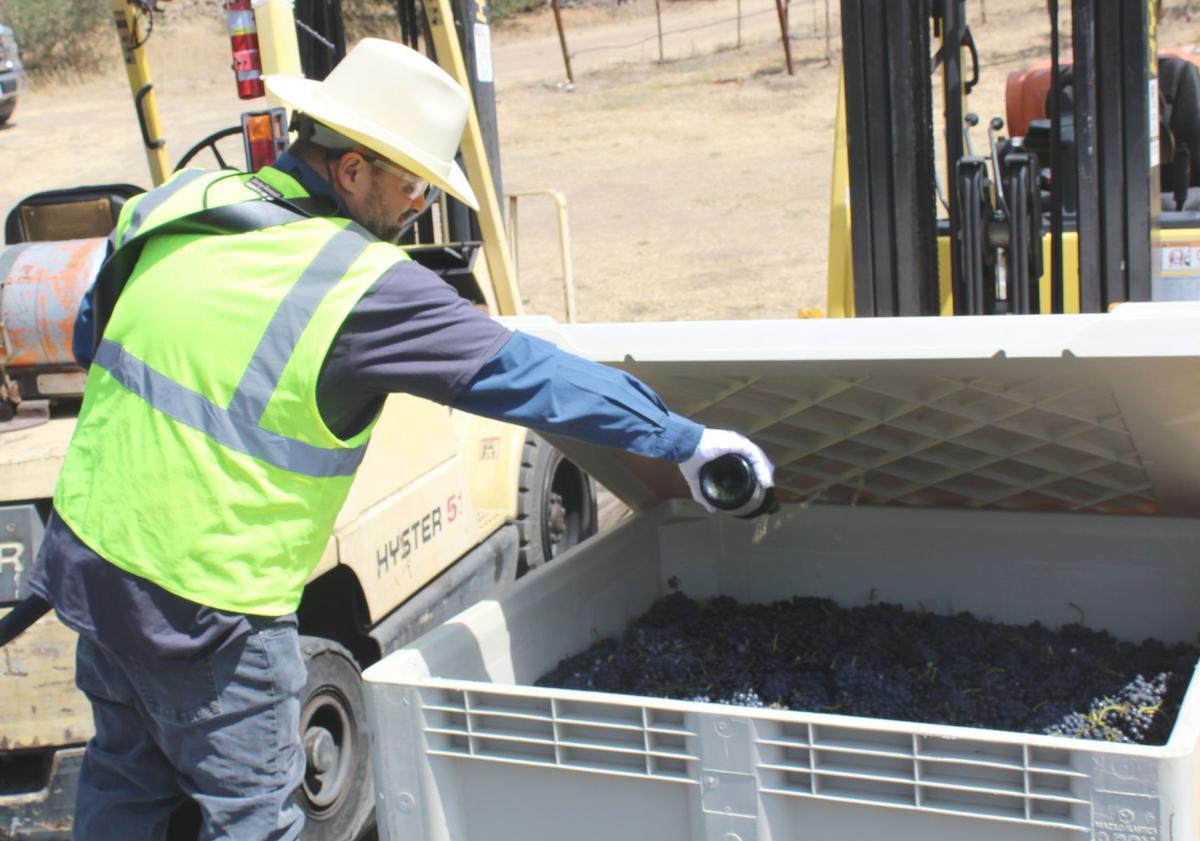 After sabering a bottle of Mumm sparkling wine, winemaker Ludovic Dervin pours the wine over a bin of just-picked pinot noir grapes during Mumm Napa's kickoff celebration to the 2018 harvest. Dervin has been winemaker at Mumm Napa for the past 17 years. 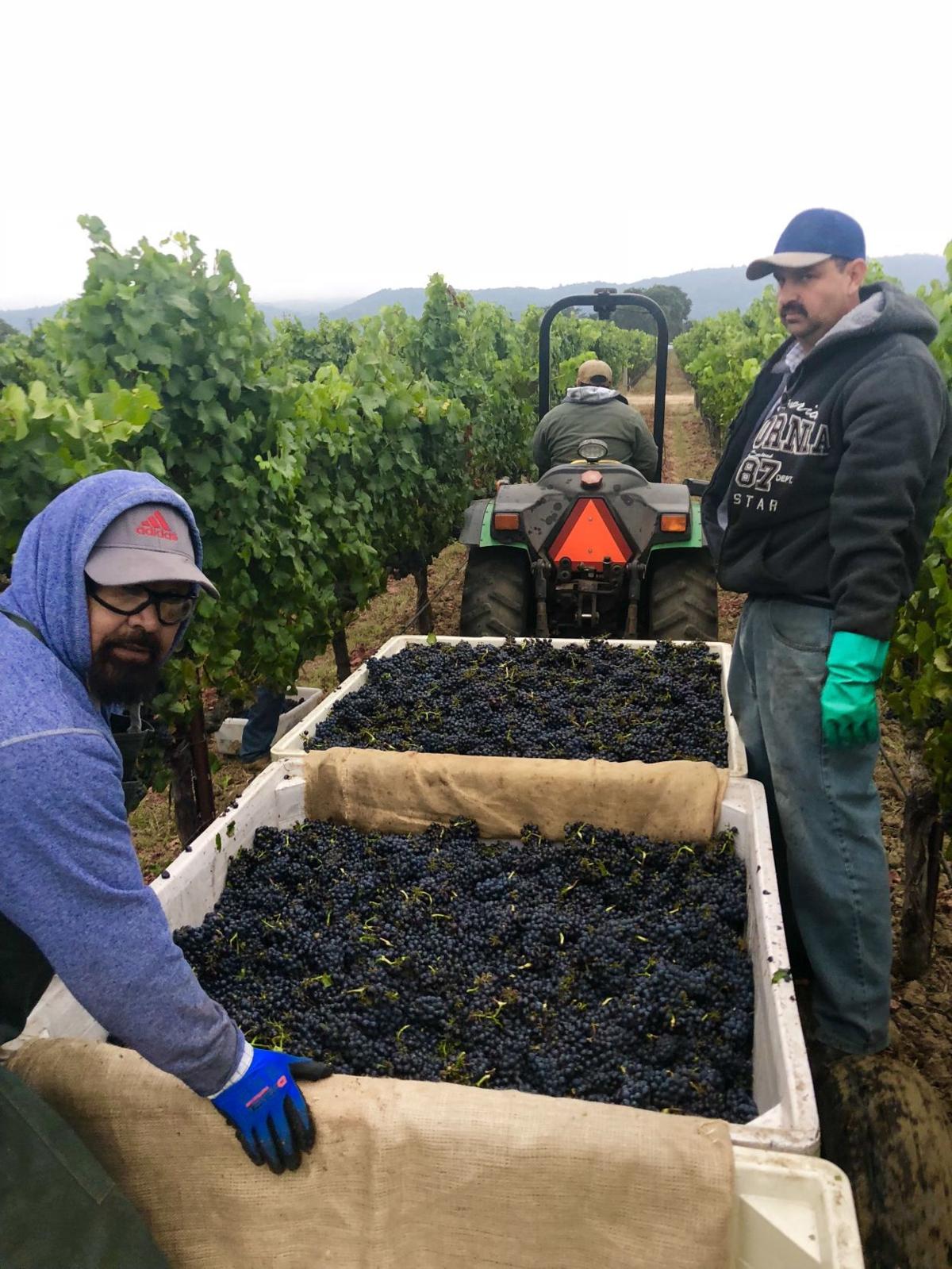 Trefethen team members Moices Dorado-Zamora and Pedro Castro, trusted to keep stray leaves out of the bins, show off the clean Pinot Noir at Trefethen on their first day of harvest.

After a few years of early picking, the 2018 harvest looks be more typical thanks to mild temperatures.

A hot July and a warm start to August have given way to cooler temperatures that have slowed ripening, giving vineyard crews a chance to take a deep breath before the harvest rush begins in a few weeks.

“It’s been a relatively warm summer but so far we have avoided the extreme heat that punctuated the 2017 growing season and August is expected to finish with temperatures slightly below average,” writes Dawnine Dyer of Dyer Vineyards. “General agreement is that the Cabernet harvest is on track to start late September/early October.”

Calistoga — Matt Crafton, Chateau Montelena — “Semillon and Sauvignon Blanc are coming off the vines steadily in Calistoga as consistent, warm August weather pushed crews into action beginning last Tuesday. The red varieties are a different story, however, as nighttime lows in the mid-40s have helped slow down ripening. There are still a few vineyards going through veraison, especially those on the flats. In general, yields look to be above-average with the season a week to 10 days behind last year.”

Howell Mountain – Laura Barrett, Clif Family Winery — “The Cabernets on Howell Mountain are just finishing up with veraison. Many blocks are getting their final fruit drop this week with a green thinning pass to remove clusters that have not yet turned color. Yields on Cabernet Sauvignon look to be average, or slightly above. The weather has been consistently warm, without any major heat spikes, making for a steady ripening season so far. The warmer Zinfandel sites have full color and are beginning to accumulate sugar. We anticipate Zinfandel to be our earliest Howell Mountain pick, likely in about three weeks.”

Diamond Mountain District — Dawnine Dyer, Dyer Vineyards — “Veraison is underway in all but the latest vineyards on Diamond Mountain and even finished in some. After the warm, dry weather early in the year, a cool, wet March/April pushed the timing of bloom back to ‘normal’ and provided adequate moisture for good canopy growth well into the growing season. It’s been a relatively warm summer but so far we have avoided the extreme heat that punctuated the 2017 growing season and August is expected to finish with temperatures slightly below average. General agreement is that the Cabernet harvest is on track to start late September/early October.”

Spring Mountain District – Stuart Smith, Smith-Madrone — “Harvest for white grapes will likely start the first week of September, which is as close to ‘normal’ as we’ve had for some time. Most of the reds have not finished veraison with Cabernet Franc being only 50 percent complete. Overall, there’s a great deal of optimism for the vintage. The vines are looking very good with a slightly larger than normal crop with small berries and just a few basal leaves yellowing. The warm weather of July and early August is behind us and the forecast for the next several weeks is for seasonal averages. A wonderful portent of the harvest is the mountain’s new resident, Ursus americanus. He’s been seen both near Stony Hill and Cain Cellars and left a rather large 9x6-inch track at Smith-Madrone.”

St. Helena – Matt Reid, Benessere Vineyards — “The 2018 harvest is just about to start in St. Helena. Though rainfall for the season was down, 12 inches that fell in March and April ensured the vines had plenty of water as they emerged from dormancy. Bloom weather was good, leading to a healthy crop that looks to be above average for Cabernet Sauvignon. July brought sustained high temperatures that lasted into August, but the weather has mercifully cooled as the harvest approaches. We expect our picks to come about four days later than in 2017, and quality looks to be fantastic.”

Rutherford — Kristin Belair, Honig Vineyard & Winery — “It is still quiet in Rutherford as we edge into the second half of August and a forecast of at or below normal temps for the next week to 10 days. At Honig, we received our first Sauvignon Blanc of the season from Gordon Family Ranch, located in the southeastern section of Napa Valley, today, Aug. 20. (23.6 Brix! Perfect!) We tested out our crush equipment and made final adjustments, so we’ll be in great shape for the extra-long days ahead. Our mid-valley Sauvignon Blanc is hovering around 20 Brix. With the cool-ish forecast, we expect that it will be at least another 10 days before we see any Rutherford Sauvignon Blanc on the crush pad.”

Oakville – Jennifer Rue, Oakville Ranch Vineyards — “This phase of harvest is full of hope and anticipation. Growers in Oakville are finishing up our green drop as we close in on 100 percent veraison. Roughly 10-14 days behind average due to a rolling pattern of two days or so of warm temperatures followed by 8-10 days of cooling, we are savoring our last free weekends. Meanwhile, the lucky small percentage in our AVA with white grapes are walking blocks tasting fruit and ensuring our presses are ready to go. Winery crews busy themselves receiving barrels, finishing the last bottlings of summer and of course, cleaning, cleaning and more cleaning.”

Atlas Peak — Gordon Waggoner, Acumen Wines — “While bloom and veraison start dates were about one week behind the long-term average, veraison is very nearly complete at this point, and we expect to see whites (especially from warmer sites) starting to pick within the next six weeks. Duration of Veraison was very short (done within two weeks, in many cases only 7-10 days), giving us excellent uniformity across blocks. We are smoke free when it counts (veraison till harvest) so we don’t anticipate any smoke-related issues. Judging by what’s on the vine, the vintage looks to be one of very good quality with strong yields.”

Stags Leap District — Elizabeth Vianna, Chimney Rock Winery — “It appears that winemakers in the Stags Leap District might have this Labor Day off! Elias Fernandez, winemaker at Shafer Vineyards, reports that they are ‘seven to 10 days behind last year,’ which means their first fruit of the AVA might come in the second week in September. Jon Emmerich, winemaker at Silverado Vineyards, was on the same page, also expecting a mid-September start. At Chimney Rock, we are in full harvest preparation mode, getting things cleaned and ready, delighted for the perfect temperatures this week. We are all looking forward to enjoying a few more summer weekends.”

Mount Veeder — Lorenzo Dalla Brea, Hess Collection — “Exciting time of the year on Mount Veeder! So far we had an overall mild summer, with very few days when temperatures rose above the 95 degrees. We are now seeing veraison on 80 to 90 percent on all varieties. Crews are walking our hillside blocks checking vine rows to ensure green clusters are removed, while adjusting canopies to allow the desired sun penetration to ripen uniformly the fruit.”

Oak Knoll District – Jon Ruel, Trefethen Vineyards — “With adequate spring rainfall followed by a warm summer, the 2018 vintage is looking very good. The timing feels late but that’s mostly because the last three vintages have all been early. Across the OKD, some growers are taking the final thinning passes in later varieties like Cabernet Sauvignon while others are already picking Pinot Noir for sparkling wines. Steve Moulds called the weather ‘close to perfect’ and said they have been paying close attention to irrigation needs. Gary and Ellen Luchtel, of Fortunati Vineyards, are keeping their ‘fingers crossed’ for what looks like ‘very high quality’ and a ‘quantity above normal with very even set.’ They don’t expect to begin picking for a few more weeks. Here at Trefethen, our 2018 harvest kicked off on Aug. 21 with some Pinot Noir for our rosé program. Cheers to the vintage!”

Coombsville — Tom Farella, Farella Vineyard — “While the growing season has been a classic mix of foggy, cool mornings and a few heat waves, things remain behind normal timing at this stage. Most of our red varietals are still going through veraison with Merlot at less than 50 percent. Vineyard samples have reflected the same story with Sauvignon Blanc and Chardonnay just starting to soften. We anticipate harvesting Sauvignon Blanc 7-10 days behind normal, which is typically Labor Day.”

Carneros – Christopher Hyde, Hyde Vineyards — “The weather throughout August has been mostly cool in Carneros, with foggy mornings and a cool coastal breeze picking up mid-afternoon. This has extended veraison, with some sparkling wine harvest having started already in the region. Pinot Noir harvest at Hyde Vineyard is scheduled to begin early next week.”

Grapegrowers are celebrating cool temperatures that are leading to a slow, even ripening process in Napa Valley vineyards.

The harvesting of white grapes like Sauvignon Blanc and Chardonnay continues in the Napa Valley, but growers are still waiting for temperature…

Harvest continues at a very slow but steady pace in the Napa Valley as temperatures rose into the low 90s, slightly accelerating the ripening …

Chardonnay, Pinot Noir, Merlot and Malbec are starting to be picked as harvest progresses around the Napa Valley.

The harvest of Cabernet Sauvignon, the Napa Valley’s signature crop, has begun.

Local grapegrowers welcomed last week’s rainfall, which cut down on vineyard dust and gave weary crews a break from picking.

Harvest has entered the home stretch at a brisk but not frenetic pace as growers bring in Cabernet Sauvignon and Merlot.

After sabering a bottle of Mumm sparkling wine, winemaker Ludovic Dervin pours the wine over a bin of just-picked pinot noir grapes during Mumm Napa's kickoff celebration to the 2018 harvest. Dervin has been winemaker at Mumm Napa for the past 17 years.

Trefethen team members Moices Dorado-Zamora and Pedro Castro, trusted to keep stray leaves out of the bins, show off the clean Pinot Noir at Trefethen on their first day of harvest.