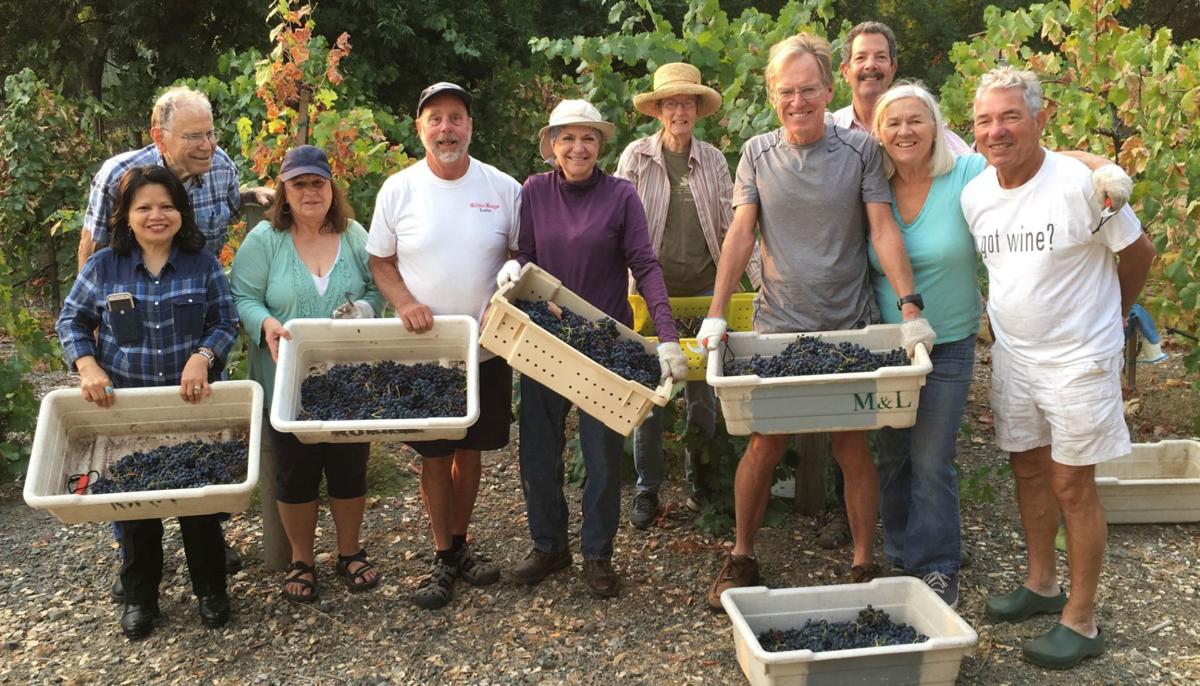 A group of 10 people – all members of the Rianda House Vineyard Committee – gathered in September 2017 to harvest Primativo grapes from their vineyard at Jacob Meilly Park in St. Helena. They are, from left, Dave and Rose Kernberger, Dee Dee Green, Don Green, Linda Neal, Donna Hardy, Mike Chisek, Barry Carrick, Kathy Carrick and Klaus Gruetzner. The group, led by Linda Neal, harvested about 900 pounds with a sugar of 25 brix, Neal said. After harvesting the grapes, they crushed them and the fermentation began. The Vineyard Committee makes wine each year, which is then served at Rianda fundraisers. 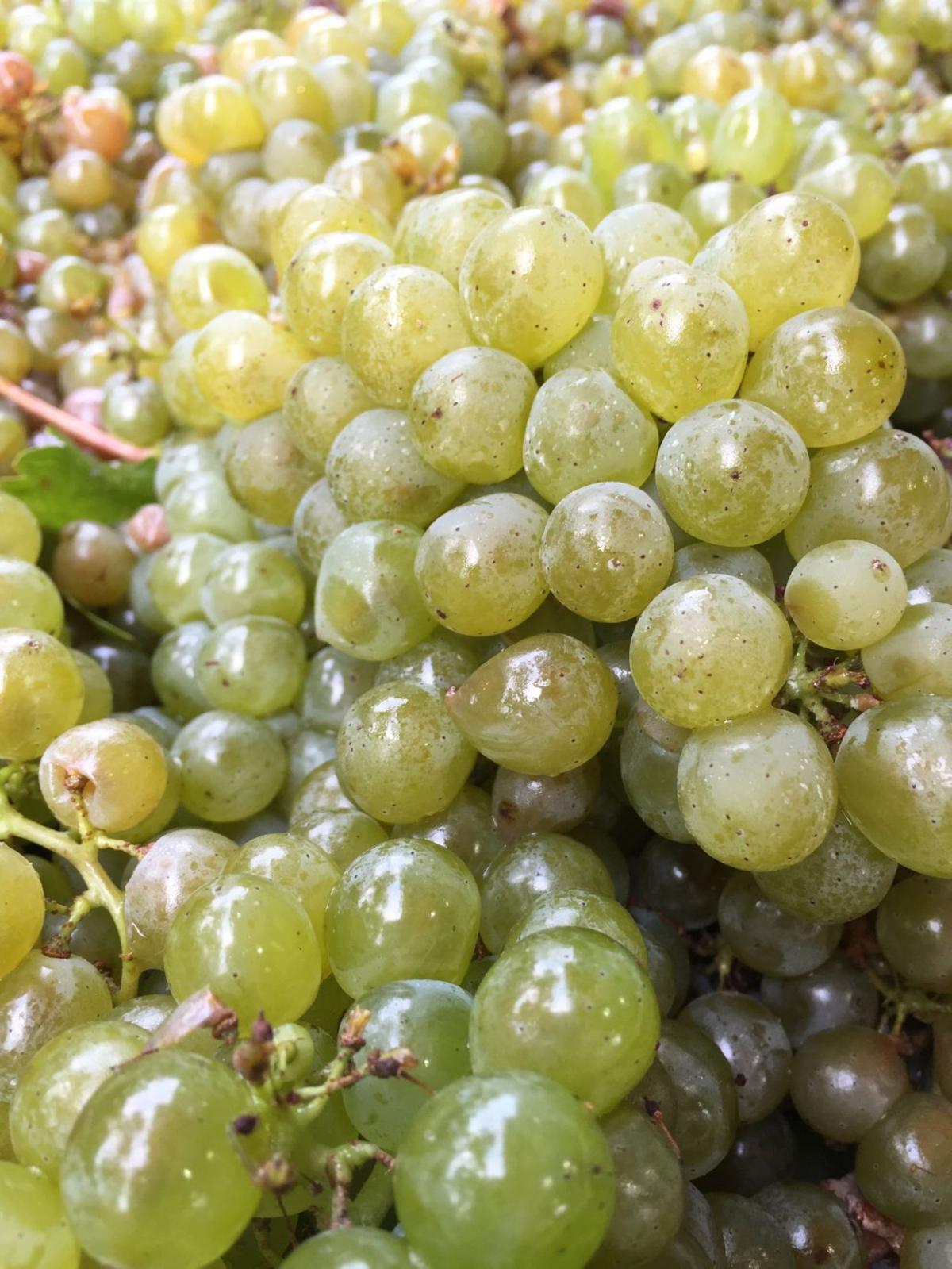 The heat in Yountville, up to 108 degrees, has stressed the sauvignon blanc fruit, which is showing signs of pronounced dimpling, according to Sandra Hewitt Bell of Bell Wine Cellars.

The unprecedented heat, with temperatures soaring way above 100 degrees, has impacted both the grapes and those caring for them. Most of the white wine grapes have been picked and many are expecting reds in the coming days.

By AVA, the following are the reports throughout the Napa Valley:

Calistoga – Matt Crafton, winemaker, Chateau Montelena, “Staying ahead of the heat has been the name of the game this week as record daytime highs, coupled with warm nights, have pushed our timetables forward considerably. If I’d been told back in May that we’d be finished with chardonnay (from Oak Knoll) by Labor Day and picking old vine zinfandel beginning Sept. 1, I would have laughed. But this is what makes each vintage so exciting. Judicious canopy management along with targeted, timely irrigation have helped mitigate the heat stress in our cabernet, especially the hillside blocks, which can be quite sensitive. Regardless, the “cooler” weather on deck for this week will be a welcome respite.

Howell Mountain – Alan Pierson and Erin Smith, O’Shaughnessy viticulture team, “The heat wave brought us temperatures in the triple digits with warmer than normal nights. However, with more than 80 inches of rain in the winter, root systems were able to continue to explore the soil. The soil moisture increased microbial activity, therefore making more nutrients available for the plants to uptake. This has resulted in healthier canopies. These canopies have protected us through the first heat wave in June to the one we are experiencing now. The result of this is fruit that’s developing nicely with no signs of shrivel or burn.”

Diamond Mountain District – Dawnine Dyer, Dyer Vineyard, “With temperatures over 100 degrees for a second week, any whites on the mountain, like the sauvignon blanc at The Vineyardist, is off the vine and in the tank. First reports are of normal crop size and excellent quality. With cabernet sauvignon on Diamond Mountain still weeks away, keeping the canopies healthy and clusters free from sunburn is the name of the game. Constant is reporting success with shade cloth on exposed fruit zones and deficit irrigation is easing stress on many vineyards. The vines continue to look good but a little relief from the heat would be very welcome!”

Chiles Valley District – Alexander Eisele, Eisele Vineyards, “From record rainfall to record heat, the past week saw high temperatures within the district ranging between 109-113. Fortunately no serious issues reported, and with milder temperatures in the forecast, we can get back to gradual flavor development as opposed to simply skyrocketing brix. The harvest of sauvignon blanc and semillon has been completed with average yields and nice quality. Chardonnay and zinfandel are beginning to come in now.”

Spring Mountain District – Stuart Smith, Smith-Madrone, “The good news is that most wineries with white grapes are picking and several are close to finishing. The chemistry of the whites is fabulous with great pHs and TAs. Unfortunately, the heat spell didn’t help much. Some of the weaker red grape vines with exposed fruit have some shriveling. These high temperatures are reminiscent of both the 1980 and 1984 vintages which similarly had high daytime and high nighttime temperatures. Fortunately, these were both excellent vintages.”

Rutherford – Kristin Belair, winemaker, Honig Winery, “Two and a half weeks into the 2017 harvest and we will have all of the sauvignon blanc harvested in Rutherford by mid-week. The unprecedented heat has impacted harvest, both the fruit and the humans. We were fortunate to have come through a wet winter and the vines were under much less stress, than had it been a drought year. As we continue through the week at full capacity, we will be checking all of our cabernet vineyards and looking to our first reds arriving at the winery in the coming week.”

Oakville – Linda Neal, grower, Tierra Roja Vineyard, “It looks as though the honors for first reds picked in Oakville go to our UC Davis Research Station. Dr. Kurtural, viticulture specialist, reported picking the Heritage Zinfandel on Friday, Sept. 1. Gamble and Paradigm were right on their heels, with merlot. Jeff Gargiulo reports they have finished with whites, with most other wineries nearly there. Winemaker Nick Goldschmidt comments, “Overall, of course, we are looking at the heat but nothing new. We have seen it all before.” All reports indicate that the vines are holding well. Gargiulo, Tench, Goldschmidt and Oakville Ranch all reported using sprinklers or misters to cool the grapes in sensitive areas, with great results.”

Yountville – Sanda Hewitt Bell, Bell Wine Cellars, “Our sauvignon blanc is going into tank as I write this. We have weathered another prolonged heat wave this week, with temperatures as high as 108, and nights that didn’t drop much below 70. The effects are being seen in fruit that has pronounced dimpling, some desiccation, and signs of stress on some plants. Many vineyards were watering in anticipation, to mitigate damage. The heat caused us to pick slightly earlier than anticipated by several days. Berries that I sampled had softened and contained thoroughly brown seeds, with no astringency. Chardonnay seeds are browning, some can be seen within the berry – translucence is developing. The cabernet is still several weeks out.”

Atlas Peak – Gabrielle Shaffer, Stagecoach Vineyard, “The heat wave of the last week or so has been one for the books. Days upon days over 100 degrees across the valley, temperatures even measuring up to 111 degrees on Atlas Peak. It’s been painful for us humans as well as for the plants. The heat coupled with low diurnal shifts, and hot/smoky north winds could have been recipe for disaster. Fortunately we’re early enough in the season that the vines are still pretty resilient and with the right TLC for your particular site, you should pull through. Certainly many of us on exposed hillside, low vigor sites may see some berry shrinkage. I’m sure brix have spiked across the county with this heat. Hopefully we’ve just speeded up our timeline and are still on track for a great 2017 vintage.

Stags Leap District – Elizabeth Vianna, winemaker, Chimney Rock Winery, “Harvest 2017 is beginning to look like a bit of a roller coaster. A record-breaking heat wave altered some Labor Day plans, and Stags Leap AVA winemakers’ predictions. Elias Fernandez, winemaker at Shafer Vineyards, thought that harvest would start 7-10 days after last year’s start date, but remarked on, “how things change quickly!” He will start harvesting merlot this week. At Baldacci Vineyards, Michael Baldacci confirms that brix numbers are suddenly starting to match last year’s for the same date and by the end of the week it “may all hit at once.” Remi Cohen tells me that at Cliff Lede Vineyards they started harvesting their estate merlot before the heat and cabernet sauvignon, “is close.” At Chimney Rock, we have not yet crushed our first grapes though it is likely that our hillside merlot will be making an appearance on our crush pad by the time this is printed!”

Mount Veeder – Sandra Scheer, director of viticulture, The Hess Collection, “Harvest has now begun on Mt. Veeder. We’ve brought in a small amount of chardonnay and are excited about what’s to come as the sugars and acids are incredibly well balanced. The rest of the mountain chardonnay should come off the vine quickly with the consistent warm weather we’ve seen. We definitely worked a bit harder in some areas to reign in vine vigor because of rainfall this year but the tradeoff has been vines that have the ability to make it through extreme temperatures without losses to dehydration or sunburn. My sense is the typical lag time we see between different varietals and micro climates here on the mountain will be more compressed this vintage.”

Oak Knoll District – Jon Ruel, CEO of Trefethen Family Vineyards, “Harvest continues at a rapid pace with growers actively picking chardonnay across the OKD. The heat last weekend has advanced the grapes, threatening to further compress an already compressed harvest. Thankfully, even when the days have been hot, our nights have still been relatively cool. We had one day with a 53 degree swing! As in previous years, we have been picking at night, starting at 2 a.m. to capture the best conditions for our workers and our wines.”

Carneros – Christopher Hyde, Hyde Vineyards, “With extreme heat at the beginning of the end of the season for 2017, we are seeing a highly impacted harvest this year. Chardonnay and pinot noir are going to wrap up in the next week, and the harvest of later season varieties is going to follow right behind. Yields are below average for most growers this year, and there is a definite threat of dehydration. Fortunately, we are coming off of a wet winter, and have had strong canopy growth to keep most vineyards in pretty good shape to withstand the heat.”

Wild Horse Valley – John Newmeyer, Heron Lake Vineyard, “The pinot noir has consistently been 3 points riper than the chardonnay. Last Thursday it reached 23 Brix; we then picked half the fruit and just now are hoping that the remainder hasn’t suffered from the weekend’s vicious heat. The chardonnay needs another week or so.”

A group of 10 people – all members of the Rianda House Vineyard Committee – gathered in September 2017 to harvest Primativo grapes from their vineyard at Jacob Meilly Park in St. Helena. They are, from left, Dave and Rose Kernberger, Dee Dee Green, Don Green, Linda Neal, Donna Hardy, Mike Chisek, Barry Carrick, Kathy Carrick and Klaus Gruetzner. The group, led by Linda Neal, harvested about 900 pounds with a sugar of 25 brix, Neal said. After harvesting the grapes, they crushed them and the fermentation began. The Vineyard Committee makes wine each year, which is then served at Rianda fundraisers.

The heat in Yountville, up to 108 degrees, has stressed the sauvignon blanc fruit, which is showing signs of pronounced dimpling, according to Sandra Hewitt Bell of Bell Wine Cellars.