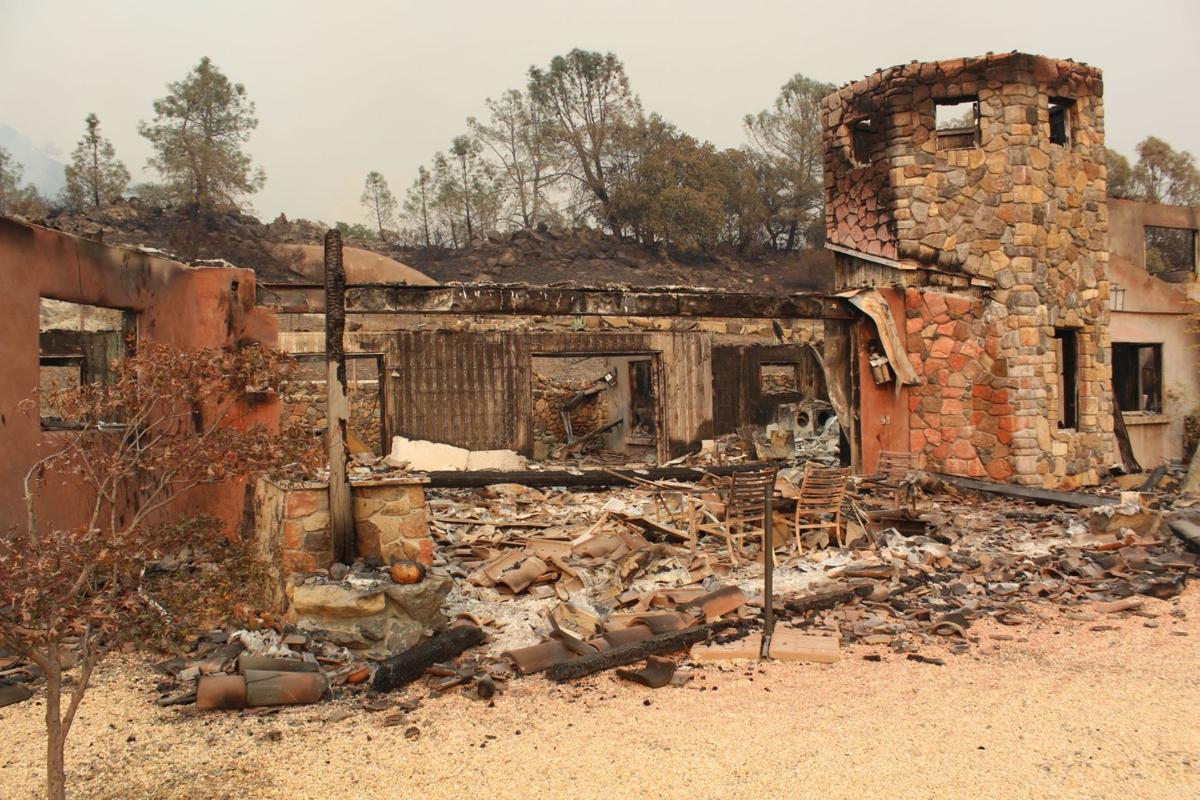 The Atlas fire destroyed the home of Kiky Lee and Michael Parmenter, owners of VinRoc Wine Caves at 4015 Atlas Peak Rd. The wines in the wine caves were undamaged and although the vines suffered some damaged, Parmenter said they will pull through. 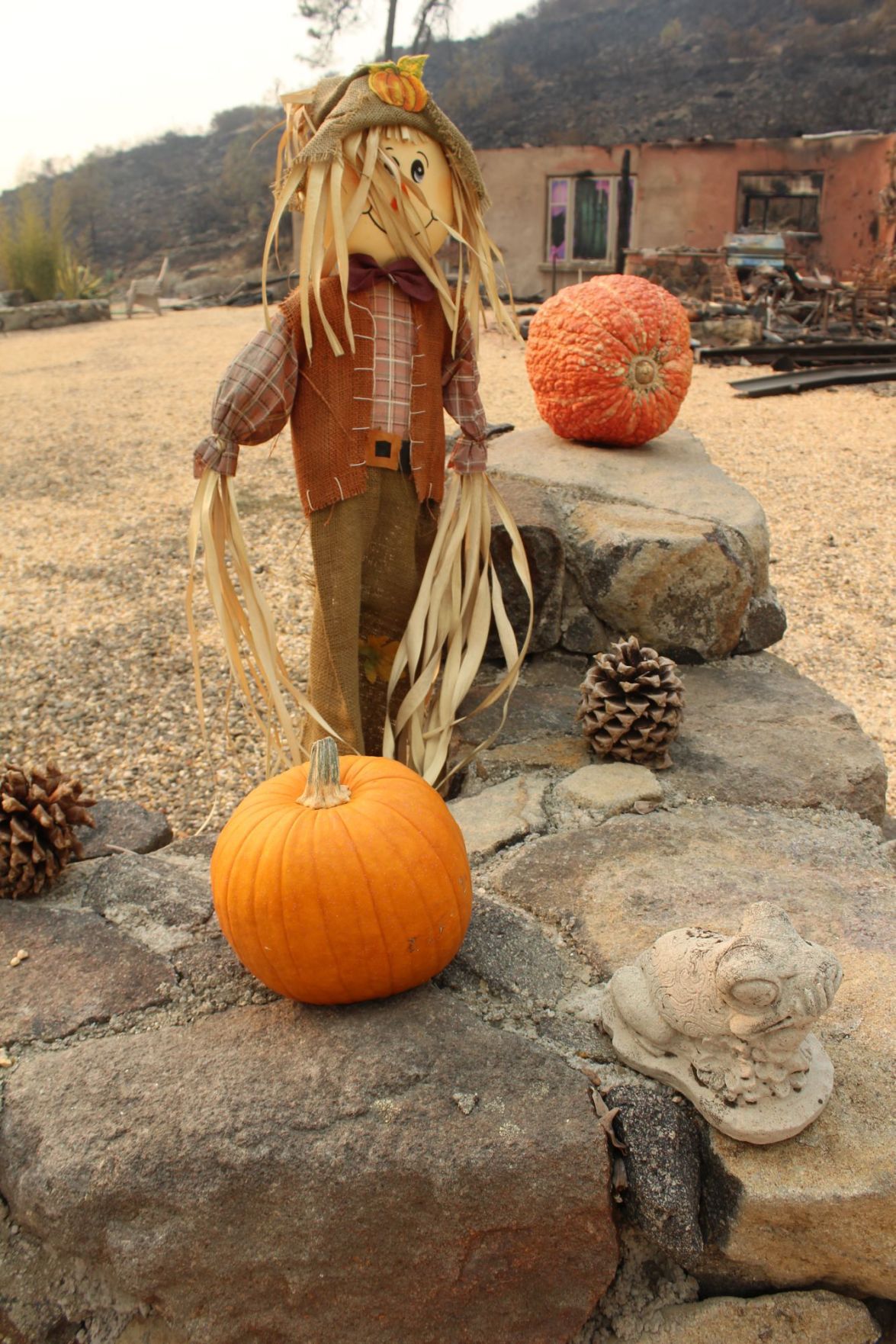 Pumpkins and a scarecrow welcome visitors to VinRoc Wine Caves, owned by Kiki Lee and Michael Parmenter, whose property is at 4015 Atlas Peak Road in Napa. 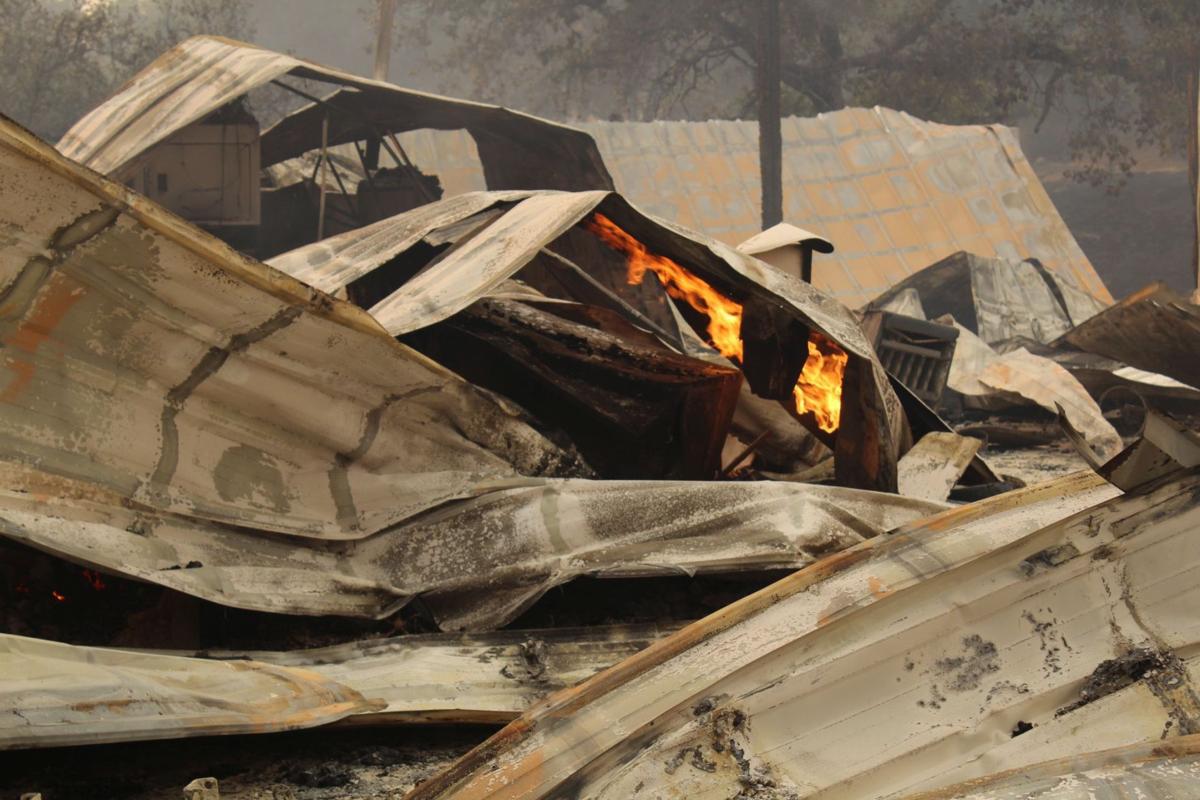 Flames could still be seen on Wednesday, Oct. 11 in what remained of a storage shed and garage in the 4000 block of Atlas Peak Road. Although the fire destroyed two outbuildings, the main house was undamaged. 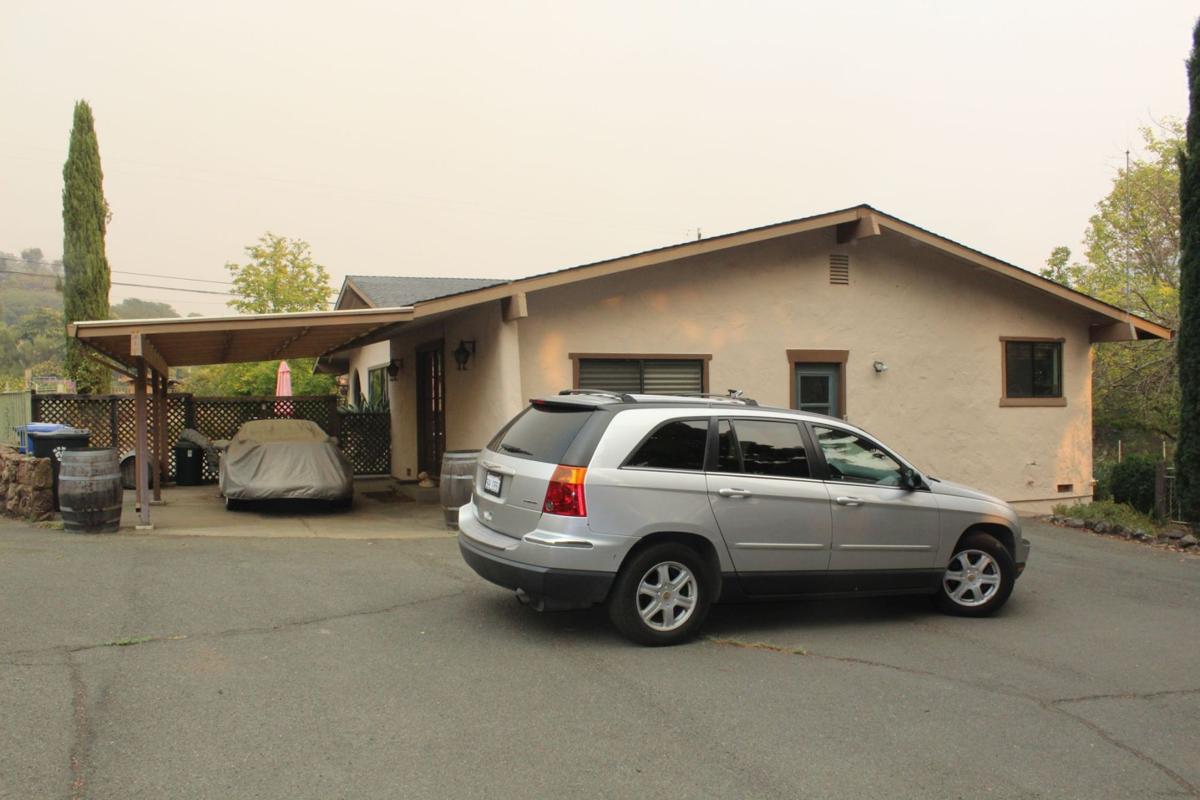 The raging Atlas Fire didn't damage the home or vineyards owned by vintners Marcie Hunt and Tom Dinkel of Dos Lagos Vineyards on Atlas Peak Road. Many of their neighbors and friends weren't so lucky. 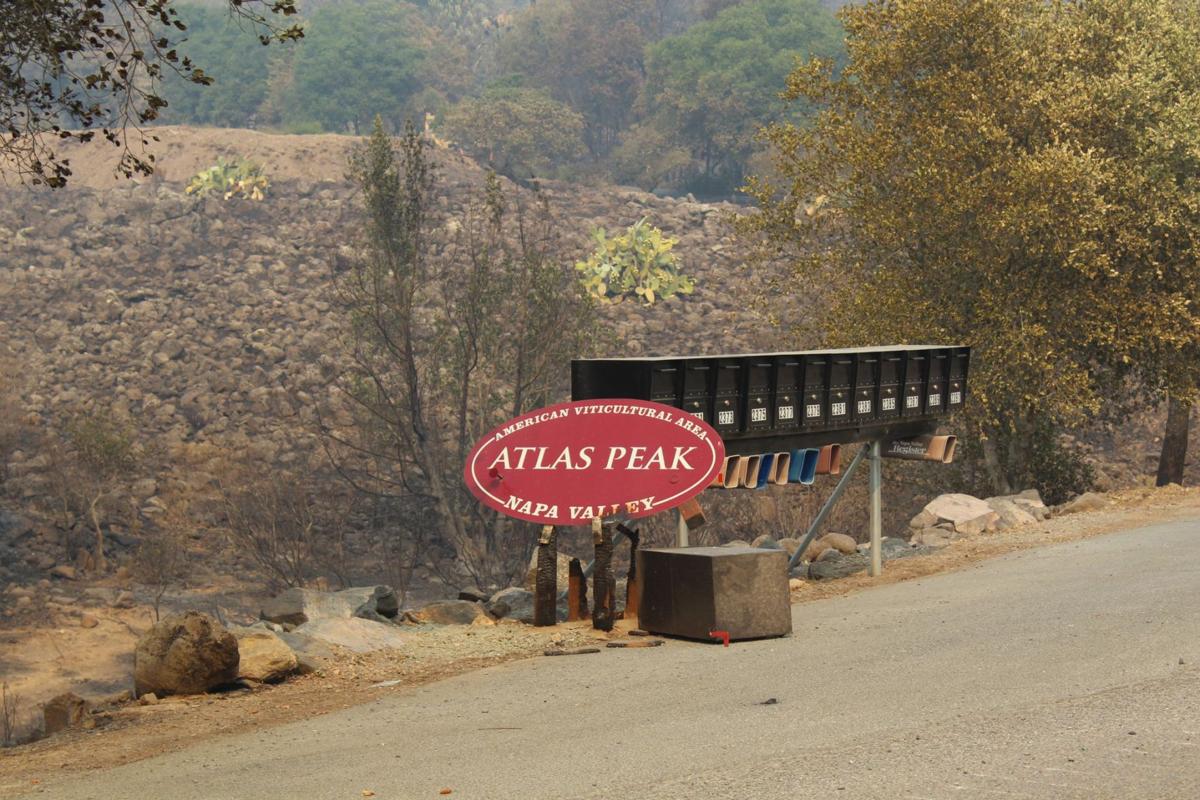 The Atlas fire destroyed the home of Kiky Lee and Michael Parmenter, owners of VinRoc Wine Caves at 4015 Atlas Peak Rd. The wines in the wine caves were undamaged and although the vines suffered some damaged, Parmenter said they will pull through.

Pumpkins and a scarecrow welcome visitors to VinRoc Wine Caves, owned by Kiki Lee and Michael Parmenter, whose property is at 4015 Atlas Peak Road in Napa.

Flames could still be seen on Wednesday, Oct. 11 in what remained of a storage shed and garage in the 4000 block of Atlas Peak Road. Although the fire destroyed two outbuildings, the main house was undamaged.

The raging Atlas Fire didn't damage the home or vineyards owned by vintners Marcie Hunt and Tom Dinkel of Dos Lagos Vineyards on Atlas Peak Road. Many of their neighbors and friends weren't so lucky.

Reinforced concrete walls are all that remain of the home of vintners Michael Parmenter and Kiky Lee, owners of VinRoc Wine Caves at 4015 Atlas Peak Road.

As of Friday morning, CalFire officials said the Atlas and Partrick fires had burned 60,607 acres, destroyed 235 structures and damaged another 31. There were 1,810 personnel on the fire lines, using 172 engines, 23 bulldozers, 18 helicopters and 18 water tenders and eight air tankers.

The Atlas fire burned 48,228 acres and was 27 percent contained on Friday.

A day earlier, Parmenter and Lee were upbeat and optimistic. Parmenter said he always looks for a silver lining and his wine cave, although scorched remains unscathed and the wines stored inside the cave are untouched; most of the winery’s case goods are in Napa; on the property, their view hut was untouched; and the Atlas Fire caused some damage to the vines, but they will pull through. Additionally, the infrastructure for the vineyard is OK.

The cabernet sauvignon grapes remain on the vines and Parmenter said he had scheduled a major pick for Oct. 11. But now, he said, there are too many complications to harvest the grapes, including smoke taint and the fact that Atlas Peak Road remains closed. “I don’t know if it can get picked. Typical of our area, there’s a lot of cabernet still out there.”

He and Lee said they believe the wildfire will lead to a rebirth. The Chinese have a proverb, which both are embracing: “The stronger the fire, the grander the resulting prosperity.”

Will they rebuild their house, which was finished in 2011? Parmenter said it's too soon to think about that. “Obviously, we’ll do something, but we need to collect our thoughts on that,” he added.

Parmenter and Lee left their house at 10:30 or 11 p.m., Sunday with only the clothes on their backs. They have owned the property for 18 years.

The story of Tom and Marcie

Vintners Tom Dinkel and Marcie Hunt, neighbors of the Parmenters, also have cabernet sauvignon grapes on the vines. They are among the lucky ones on Atlas Peak Road, as their grapes, vines, vehicles, house and outbuildings at 4080 Atlas Peak Road were not burned.

Dinkel said most of their friends who own property farther down Atlas Peak, toward the Silverado Country Club, lost their homes.

“Some made it down, driving literally through the fire and past cars that were on fire to get out. I learned later they subsequently lost their homes,” he said.

Dinkel said he, too, would like to get his grapes harvested.

“That’s the next challenge, to get a harvesting crew up there and harvest the grapes when the road is open,” he said.

But, even if he had a load of grapes, the custom crush facility used by Dos Lagos Vineyards, owned by Dinkel and Hunt, is on Sage Canyon Road, which is closed.

“We’d have to find a different crush facility that’s not impacted by the fires. Some of them are in Carneros and that’s not an option, so I guess we’re going to leave the grapes hang for a bit,” he said.

Dinkel said he talked to one of his neighbors on Thursday.

“They said it was relatively calm overnight, with a nice beautiful blue sky today and the air quality is pretty good, but the fires are raging everywhere,” he said.

Dinkel said he and Hunt were watching TV and the lights started flickering on and off on Sunday night. That was the start of a harrowing night he’ll never forget.

Dinkel said after unplugging their electronics, they casually looked out the window and saw “a huge orange glow nearby. We took drastic action, jumped into the car and went to check on our neighbor, Garrett Brown. His niece was there, getting him sorted out, so we knew they were safe.

“Then we headed up Atlas Peak Road, only to find a huge tree was blocking the road. We turned around and collected another neighbor, Tim O’Leary.”

He and Hunt stopped by to notify some renters, including Lisa Hone, who were staying at a house on Atlas Peak Road. “We pounded on their door and woke them up, and made sure they knew what was going on and they followed us down to the home of Cecilia Setty.”

A solid wall of flames

What they saw next on the top of the ridgeline was chilling.

“We could see a solid wall of flames, all the way from Pritchard Hill, across Stagecoach, across Antinori and Antica and down to Circle R Ranch, all the way down as far as we could see to the south.”

It was about 11 p.m. by then and standing on the ridgeline the wind was at their backs.

“It was howling,” Dinkel said, and they could tell the fire, which was trying to go up and over the ridgetop, would be held in check by the winds.

“We could see the pine trees exploding and shooting fire 250 to 300 feet in the air. It was crazy.”

They went back down Atlas Peak Road to update those gathered at the Settys' home and to try and figure out an escape plan. They heard from a neighbor that part of the fire had crested the ridge and was headed down to Brown’s and Dinkel’s property.

“That’s when we decided to pull the plug and get out,” Dinkel said.

They could not head down Atlas Peak Road, because it was covered in flames. By then it was 2:30 or 3 a.m. and a convey of about a dozen vehicles went up and over Atlas Peak – the downed tree had earlier been removed by Cathy Hammond and her son, who were on a tractor.

“We went down a firebreak road that was not well maintained and used every ounce of the capability of our four-wheel drive Land Cruiser that it had,” Dinkel said.

The firebreak road dropped down to Sage Canyon Road and by then it was 5 a.m.

“We went to Rutherford, down the Silverado Trail until we could see the glow in front of us and then went across the Oakville Cross Road and came out near the Oakville Grocery,” Dinkel said.

From there, they went to Yountville and hung out at the Villagio Inn & Spa. “They were extremely nice and allowed us to get a couple hours of sleep in the spa. Then we bugged out and went to Berkeley.”

What was the toughest part of escaping from the Atlas Fire?

“There was no cell coverage, no communication, no Internet and no power. It was truly being in the fog of war. We had no idea of what was going on, we had no source of information and we could see the fires everywhere.”

On Friday morning, Lisa Hone’s husband, sent an email to Dinkel. It said in part: “I wanted to say thank you for being a true life hero on Sunday. Without a doubt in my heart I know that you saved the life of my wife, Lisa and her friends. Had it not been for you, they would not have known to get out of that house. My family will forever remember you for your selfless acts and courage. Words cannot express my gratitude to you and I could never repay what you did for Lisa and my family.”

Time is short to prepare for 2018 wildfire season

The October 2018 wildfire season has already started. We are concerned that there has not been enough progress on improved fire safety procedu…