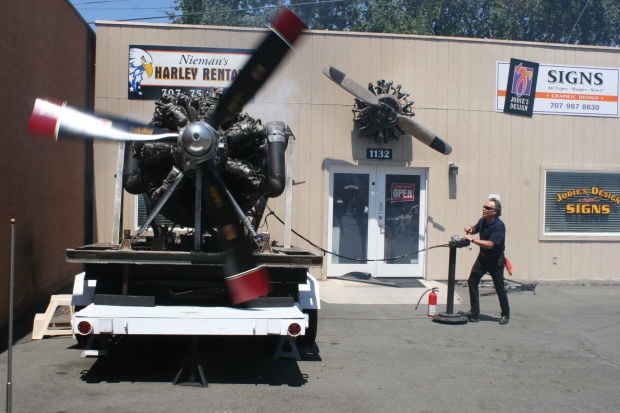 The three-bladed Pratt & Whitney engine produces 4,300 horsepower and was one of 10 engines on the B-36. 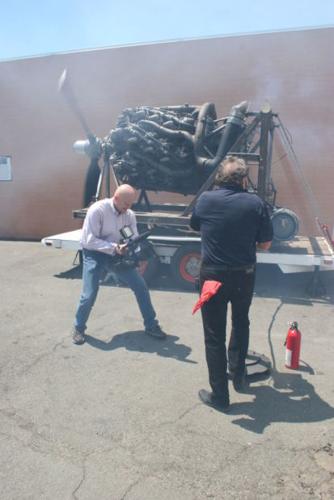 Mike Nieman, business owner and aircraft engine enthusiast, takes down a sign before starting his Pratt & Whiney R-4360 engine last week. He said the last time he started the huge airplane engine, it nearly blew the sign off the wall. Wayne Freedman, an ABC7 News reporter from San Francisco, mounts a small camera on the bumper of a Volkswagen at Mike Nieman's business on Main Street in downtown St. Helena.

The starting of an aircraft engine at Mike Nieman's parking lot drew quite a crowd last Wednesday afternoon.

Even while it sits still and silent on its trailer in a downtown parking lot, the massive airplane engine attracts attention from people walking by.

Once it’s fired up, though, as it was last Wednesday, the 28-cylinder Pratt & Whitney R-4360 Wasp Major engine creates quite a marvelous racket and draws a crowd, including a television reporter from San Francisco.

St. Helena resident and businessman Mike Nieman bought the engine from a collector two years ago and spent a full year getting the needed accessories, including building an oil tank, mounting it securely on a car trailer and learning how to start it.

The airplane engine is a piece of aviation and Cold War history. Nieman said the R-4360 was built in 1946, the first year of the Convair B-36, an airplane that was designed to fly nonstop from Alaska to Moscow, drop a hydrogen bomb on the Soviet Union’s capital city and fly back to Alaska.

Eight hundred and eighteen planes were built, designed to cruise at 30,000 to 50,000 feet. Each plane had 10 engines, six Pratt & Whitney R-4360s (three on each wing) and four General Electric jet engines, needed to provide lift for the hydrogen bomb and speed to clear the blast zone. Air Force Gen.l Curtis LeMay ordered the plane, nicknamed “Peace Maker,” into production.

“Where else are you going to see one of these?” Nieman asks. “There are lots of engines in museums that are cutaways that Pratt & Whitney made, but only five that are running on stands like this.”

To start the engine, it takes Nieman two hours to go through a checklist of 30 items, including checking the chains that hold the engine on the trailer, its tires, electric brakes, propellers, propeller nuts, exhaust and flame dampeners. “Just to get it to start without it hydrolocking is a chore,” Nieman said. “There’s a lot to do to start it, so you don’t ruin it.”

Nieman stopped by the Star offices on Tuesday to say he was going to start the engine on Wednesday, because Wayne Freedman, reporter for ABC 7, KGO-TV, was doing a documentary on the engine. Freedman, who has worked in television news in San Francisco since 1981 and has won 51 Emmys for his work, knows a story when he sees one.

“I passed this thing last year when we were doing some sort of story on something else,” he said. “It was a basic news story and we were having lunch. I walked by this thing.” He said he was in a hurry that day and didn’t do anything about it. About six weeks ago, he was back in St. Helena, looking for lunch and he again saw the engine. “I walked in the door. My big question was what kind of guy is this character. You’ve got to figure there’s a big engine, there’s a big character. Sure enough, there’s a big character.”

Nieman, though, is something more. Freedman said his backstory is that he loves the history of the Napa Valley, and works on the airplane engines that were and are used to defrost the grapes in the spring. “He’s not just a motorcycle rental guy, not just a gearhead but a guy with a sense of history and a sense of the valley,” Freedman said.

The TV reporter also was intrigued with the engine itself and what it represented. The engine and the B-36 it came from were the epitome of Cold War engineering and represents the height of the Cold War. “It’s sitting here in front of a motorcycle rental shop in St. Helena. Then he starts the flipping thing up and everybody gathers round. It’s a small-town phenomenon. If it was in the big city, his neighbors would be complaining. Here, everybody loves it,” Freedman said.

One of those in the crowd was St. Helenan John Waskiewicz, who is a pilot for American Airlines. He’s been a pilot for 40 years and has had a love affair with old engines for nearly all of his life. It was the first time he’d seen the R-4360 started.

Freedman arrived to record the starting of the engine early in the day and spent hours taking video and setting up three cameras. Nieman said he would call the Star offices just before he started the engine, and true to his word, he did.

Nieman stood by a handmade controller, with its various switches, and spun the three-bladed propeller so it turned around six times, to make sure oil wasn’t sitting in any of the 28 cylinders. (If it was and the spark was on, the resulting explosion between the gas and spark would send the piston into the oil and it could “blow a jug off,” in Nieman’s words.)

Once the cylinders were clear of oil — the engine holds 45 gallons — Nieman turned on the mags and primed it. He took a cup of gasoline and poured it down the supercharger, a job usually done by a flight engineer when the B-36 was sitting on the flight deck.

A huge puff of smoke came out of the exhaust, obscuring Nieman, Freedman and the engine. It then sputtered and caught and then its three-bladed prop started turning. It created quite a wind behind and the crowd stood far away — in awe.

After Nieman ran the engine for a few minutes — he said he only used a quarter throttle — he shut it down and the crowd cheered. Afterward, he admitted he’s scared and then excited every time he starts it. Why? “The power of that much horsepower (4,300 with a supercharger and water injection) starting, you don’t know what it’s going to do. It’s (got more horsepower) than any dragster, more than anything. If you don’t start it right, you could blow a jug (a cylinder head) off. This is like a pressure cooker.”

The Pratt & Whitney has 28 cylinders, 56 spark plugs, weighs 4,560 pounds, uses 250 gallons of fuel and 50 gallons of oil per hour and was built with a two-stage supercharger with a pressurized fuel system, water injection, a 24-volt electrical system, with two batteries and two starters. The B-36 had to carry 4,000 gallons of jet fuel on board as well as 10,000 gallons of water. When Nieman bought the engine — he said it is priceless — the original log books came with it.

Nieman’s fascination with aviation engines began a few years ago, after he found an World War II-era Lycoming engine, used for a Stearman biplane, stuck in the mud in Kelseyville, in Lake County. It had been on a tower and used to circulate freezing air in an orchard. The tower had collapsed and Nieman hauled the engine to his St. Helena shop. “It was the beginning of a joyous time for me,” he said.

Today, he has 12 engines, all running. “I’ve had a fascination with engines since I was a child,” he said.

VW Bug decked out in wedding flowers in St. Helena

Mike and Jodie Nieman’s 1972 Volkswagen Bug was decked out in flowers on Main Street on Monday, Oct. 22, courtesy of Erica Grube and her Calis…

Some 40-plus years ago, Mike Nieman and Tom Harding learned about Harley-Davidson motorcycles while they attended William Bowers’ classes at S…

To Mike Nieman, the smell of his large Pratt & Whitney “Wasp Major” radial aircraft engine running is “the smell of victory.”

The three-bladed Pratt & Whitney engine produces 4,300 horsepower and was one of 10 engines on the B-36.

Mike Nieman, business owner and aircraft engine enthusiast, takes down a sign before starting his Pratt & Whiney R-4360 engine last week. He said the last time he started the huge airplane engine, it nearly blew the sign off the wall.

Wayne Freedman, an ABC7 News reporter from San Francisco, mounts a small camera on the bumper of a Volkswagen at Mike Nieman's business on Main Street in downtown St. Helena.

The starting of an aircraft engine at Mike Nieman's parking lot drew quite a crowd last Wednesday afternoon.