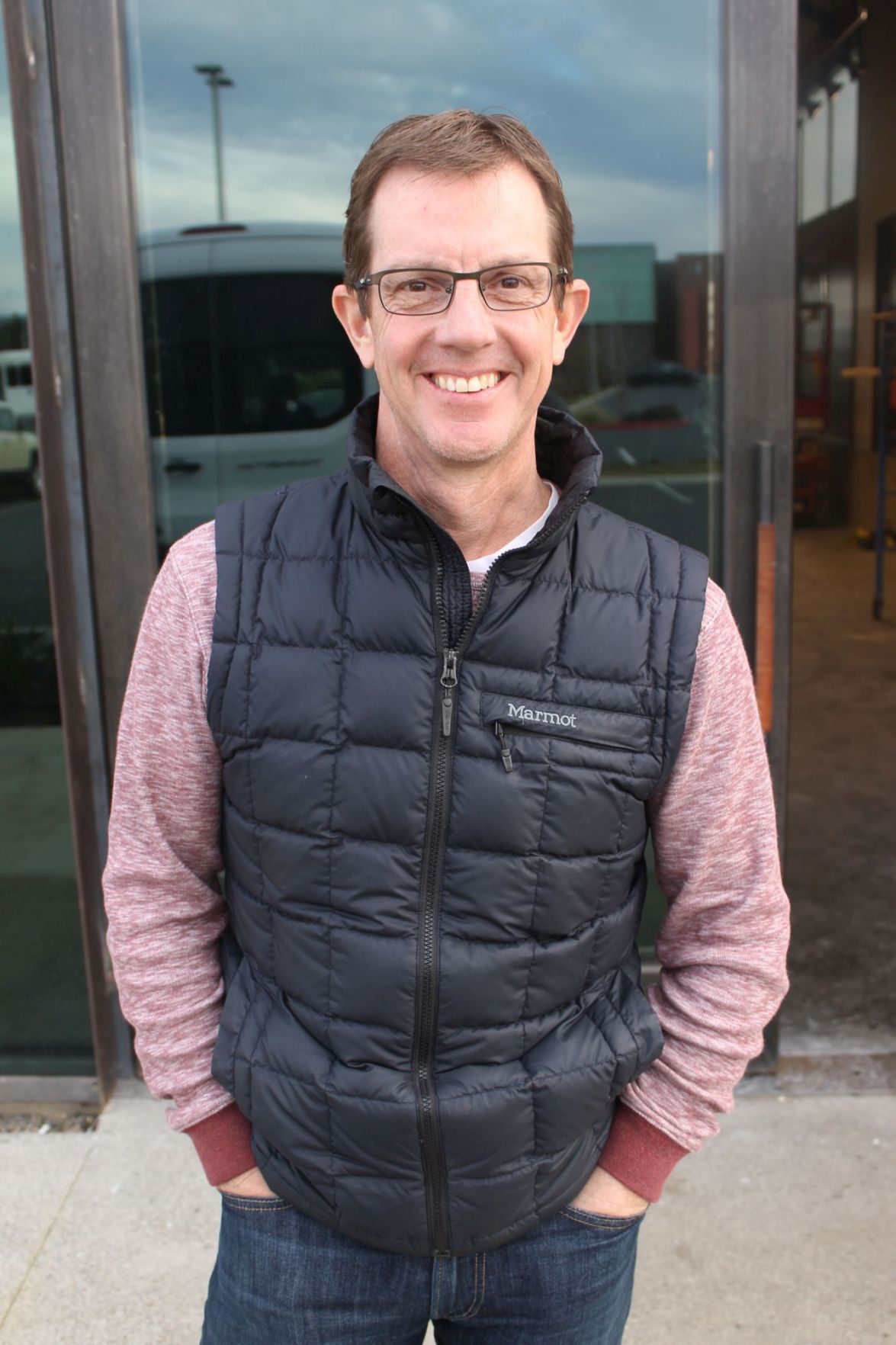 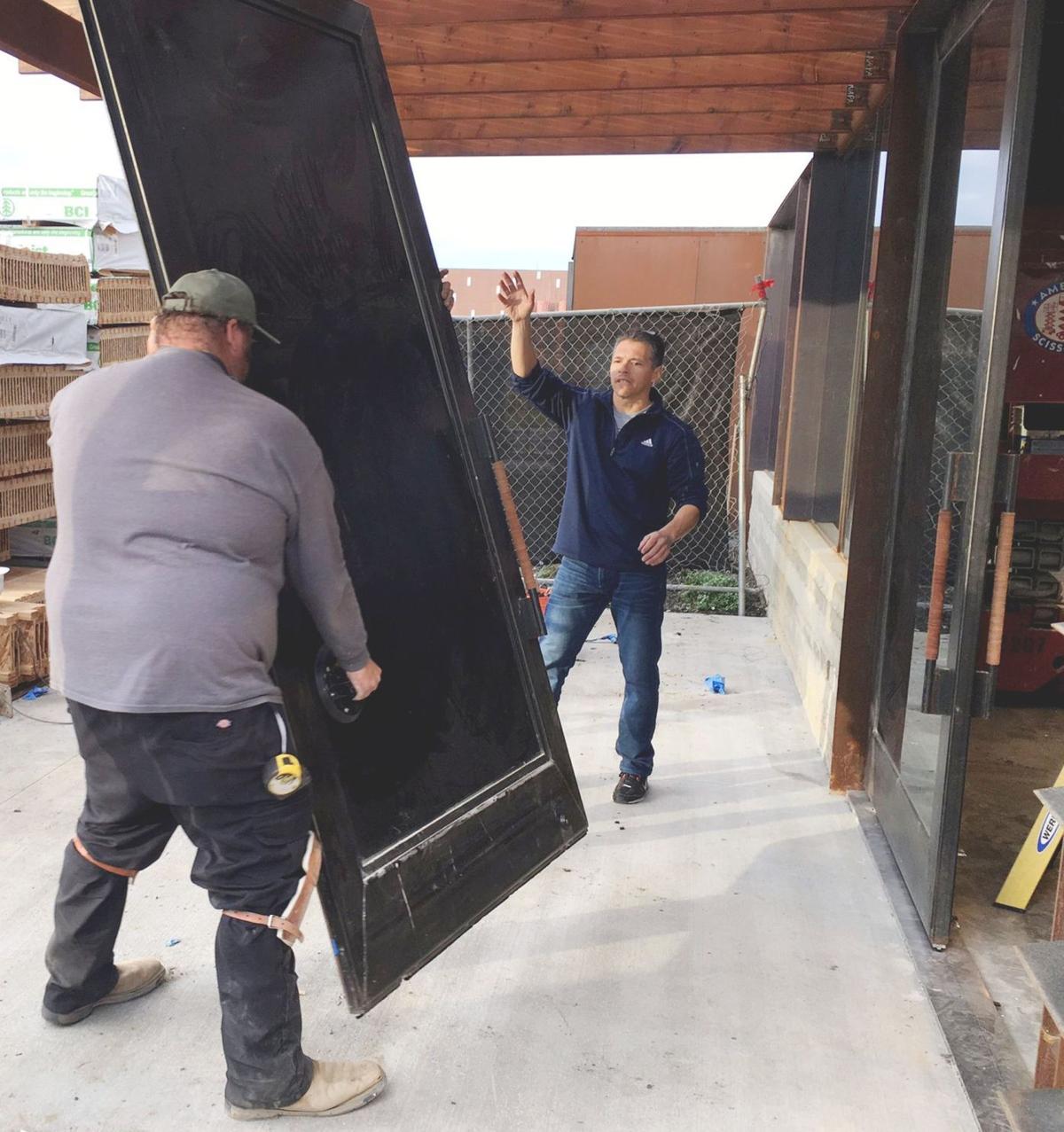 Workers at the new Napa Valley Velo pick up a heavy door and put it into its place last week as construction continued before the store’s opening on Friday.

The new sign for Napa Valley Velo, which is located at 145 Gasser Drive in Napa. It is a sister store to St. Helena Cyclery, which celebrated its 25th anniversary last summer. The new store opens Friday.

St. Helena’s Jake Scheideman, owner of St. Helena Cyclery, is opening a new bike store in Napa on Friday, Napa Valley Velo, named after an elite bike racing team he and others sponsored years ago.

Scheideman was standing in a new storefront on Gasser Drive, adjacent to the Cinemark theater. On the last day of January, less than a dozen days before the store was set to open, there were no bikes in the shop and workers were wrestling with heavy glass doors before installing them. Scheideman and the store’s new manager, Blaine Rainey from Grand Junction, Colorado, were training a new employee, discussing the best way to explain what’s involved in a bike tuneup to a customer.

Scheideman said he’s wanted a bike shop in Napa for 20 years. “We’ll have full service like we do in St. Helena with our same customer service that we’re very well-known for in St. Helena,” Scheideman said. Brands for sale will be a full line of Trek bikes, Pinarello road bikes, Pivot mountain bikes, Public bikes, Cleary bikes for youngsters and Electra, which are electric assist bikes.

Both Electra and Trek build electric assist bikes, designed for people to ride around town, on the Napa Valley Vine Trail or even to commute with. Those bikes “are opening a new niche for people who are intimidated riding longer distances. These bikes help them get out and ride without the intimidation,” Scheideman said.

The electric motors are always working and riding one feels like someone is pushing you from behind.

“You still have to pedal and you get a workout but you’re going 18 miles an hour, which you can do on your (regular) bike, but you’re working a lot harder to do it. We really want to open that door up to people down here who aren’t familiar with it,” Scheideman said.

Napa Valley Velo is part of the continuing development on Gasser Drive, and Scheideman said he can’t say enough about working with the Gasser Foundation.

The new shop is just a stone’s throw from the Napa Valley Vine Trail and you can either jump on the trail on Third Street and get to the Gasser complex or you can rent a bike and head to Kennedy Park, which is about two miles from the store.

As far as staffing, Scheideman said he will continue to have three or four people in each of the two stores, but he will be based in Napa. Rob Nelson continues as the general manager in St. Helena.

In August, Scheideman threw a party to celebrate his owning St. Helena Cyclery for 25 years. He invited a few friends, including those who helped him get started and those “who have stuck with me for a long, long time,” he said. Some of those who attended are now young adults that Scheideman knew when they were youngsters.

During the summer in those years, Scheideman installed a TV in the shop, just for the kids, because they were bored and there was nothing to do.

“They would come in packs of 10 and 12 on their roller blades, ripping through the store and just come and hang out. Those kids are all master winemakers now and I’m very proud of them,” he said.

In his 25 years as a store owner, Scheideman has been a Little League coach, a Rotarian, Chamber of Commerce president, he spent 15 years in the fire department and he raised his family here. He also led many trips to Nicaragua taking those from the Napa Valley to build schools, clinics and homes. Talking about his volunteer work, Scheideman said getting involved is in his blood.

“It’s not something you have to do, it’s just something you do,” he said. “I’m a big believer, if you want something, you’ve got to get involved and do it, you can’t expect anyone else to do it for you.”

Twenty-five years in business is quite a milestone, but Scheideman said “it just kind of crept up on me. I wasn’t trying to hit 25 years. I remember when I first started, I told my Dad I would do it for about five and then I would do something different with my business degree.

“I think we all had a dream that I was going to be a classic suit-wearing guy but I said I want to take a crack at this. I was 22 years old when I started, fresh out of college and I had no idea what I was doing. Back then St. Helena was different, the bike business was different and it wasn’t easy.”

If you want to visit

A national developer has made an offer to buy a 10-acre parcel on Soscol Avenue listed for sale by Napa’s Gasser Foundation for $20 million.

Workers at the new Napa Valley Velo pick up a heavy door and put it into its place last week as construction continued before the store’s opening on Friday.

The new sign for Napa Valley Velo, which is located at 145 Gasser Drive in Napa. It is a sister store to St. Helena Cyclery, which celebrated its 25th anniversary last summer. The new store opens Friday.